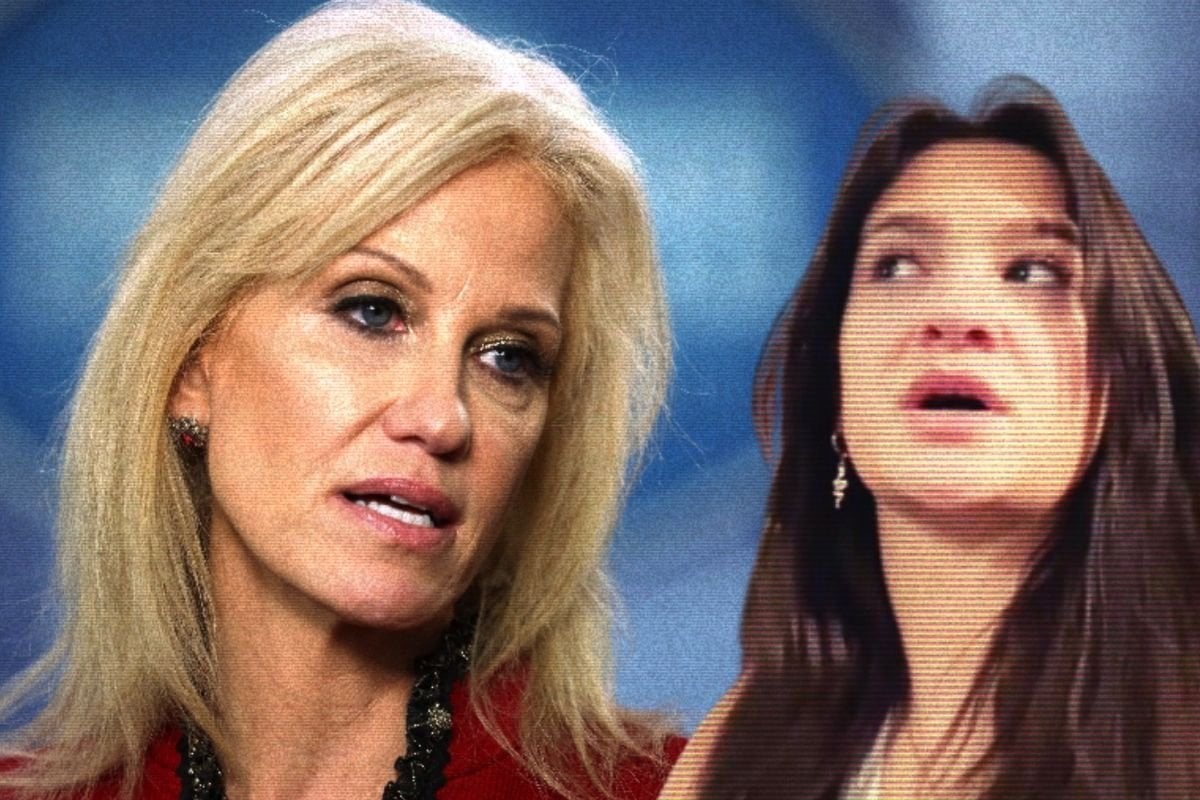 The Conway family is as complicated as upside-down calculus.

Deeply divided by their political opinions, across genders and generations, a good deal of their disputes explode in the public domain, with debris scattered across social media. 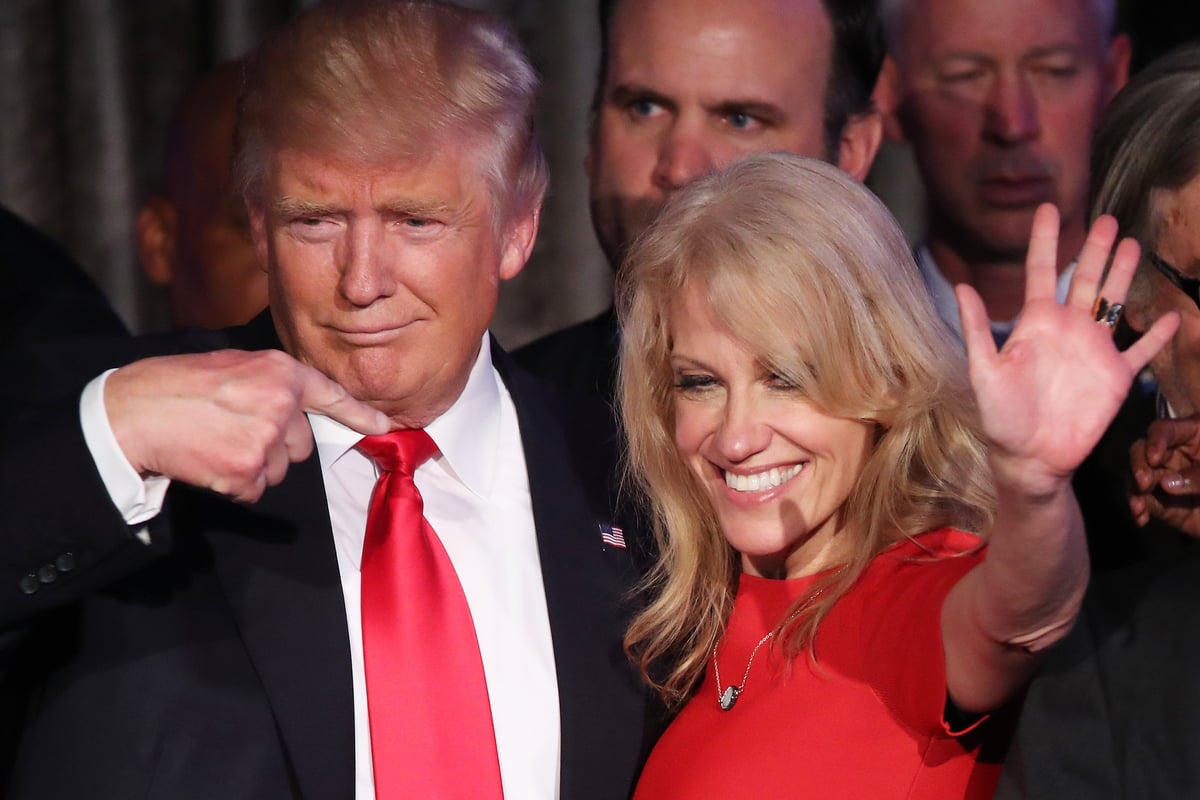 Kellyanne Conway was one of Trump's most senior advisers, until she quit in August 2020. Image: Getty.

For the past year, Conway has been in the news for an unconventional, and even more uncomfortable, reason: her very public feud with her 16-year-old daughter, Claudia Conway.

In the past 24 hours, the feud has escalated dramatically with the former Trump adviser allegedly posting a naked photo of her teenage daughter to her Twitter account, where she has over three million followers.

Police have since arrived at the family's New Jersey mansion, with Alpine Police Chief Christopher Belcolle telling New York Post: "An investigation is being conducted. No additional information can be released."

Claudia Conway addressed the incident on TikTok, where she has amassed a following of over 1.6 million followers.

In a since-deleted video, Claudia shared her belief that her mother had grabbed the photo after confiscating her phone.

"I guess she accidentally posted it or somebody hacked her," the teenager said. "But nobody would ever have any photo like that, ever. So, Kellyanne, you’re going to fucking jail."

Claudia Conway after finding out from her TikTok followers that this photo was circulating on Twitter, part one: pic.twitter.com/2UqaySrxT7

On Monday night, Youtuber Tana Mongeau went live on social media while on FaceTime with Claudia, who at the time was arguing with her mother about the photo. Mongeau later posted the 20-minute video to IGTV with the caption, "#justiceforclaudia".

"You posted a naked picture of me," Claudia Conway is heard saying to her mother. "You literally posted a nude photo of me, and you can say you didn't, but millions of people saw it."

Kellyanne also calls her daughter a "phone addict," "troubled" and says they need to get an ambulance for her because she suffers from mental illness.

Social media was awash with accusations that Kellyanne Conway is abusing her daughter, and that the nude picture - which classifies as child pornography considering Claudia's age - was uploaded as revenge.

The next day, Claudia's TikTok video addressing the nude photo disappeared and a new one was shared, in which Claudia changed her tone, this time insisting her mother "would never, ever post anything to hurt me like that intentionally".

The incident saw "Claudia Conway" become the third top-trending topic on Twitter in the US on Tuesday, local time. "#JusticeForClaudia" has also been trending.

This is not the first time the family have feuded in front of the eyes of the world. In fact, it follows a pool of headlines from the past 12 months that have documented the boiling tensions that bubble within the four walls of their family home.

Here's a brief history of the Conway family's public feuds.

Disagreements in the Conway household are not an anomaly. More so, they are the norm.

Kellyanne Conway's husband, conservative lawyer George Conway, is an open and outspoken critic of Donald Trump - he was one of the most dogged detractors of his wife's boss.

In 2018, he called the Trump administration a "shit show in a dumpster fire," which was awkward considering his wife's significant role in said administration. He was also one of the founding members of The Lincoln Project, which had the forthright goal to "defeat President Trump and Trumpism at the ballot box."

Unsurprisingly, Trump didn't like his adviser's husband, tweeting in 2019: "George Conway, often referred to as Mr. Kellyanne Conway by those who know him, is VERY jealous of his wife's success & angry that I, with her help, didn't give him the job he so desperately wanted. I barely know him but just take a look, a stone cold LOSER & husband from hell!" 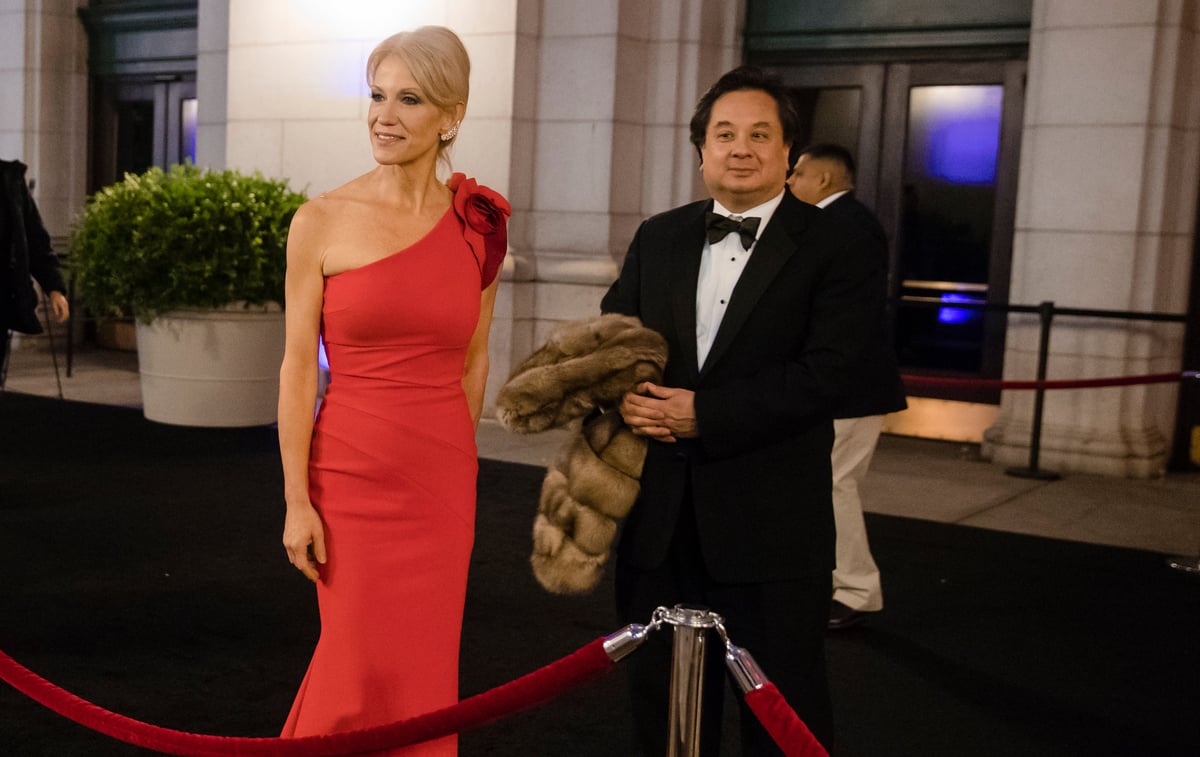 Their marriage bewildered many, but it was also described as emblematic of the divided country in which they live. And yes, the couple are - at least to the public’s knowledge - still married.

When asked by the Washington Post about her husband, Kellyanne said: "I feel there’s a part of him that thinks I chose Donald Trump over him. Which is ridiculous. One is my work and one is my marriage."

In August 2019, both Kellyanne and George Conway announced they were stepping back from their respective careers to focus on their four children.

“We disagree about plenty,” she wrote of herself and her husband at the time, "but we are united on what matters most: the kids."

Just moments before her announcement, her daughter Claudia had tweeted that her "mother's job ruined [her] life" and that she was "pushing for emancipation".

my mother’s job ruined my life to begin with. heartbreaking that she continues to go down that path after years of watching her children suffer. selfish. it’s all about money and fame, ladies and gentlemen.

i’m officially pushing for emancipation. buckle up because this is probably going to be public one way or another, unfortunately. welcome to my life

Commenting on her relationship with her father, she asked her followers to stop "stanning" him.

as for my dad, politically, we agree on absolutely nothing. we just both happen to have common sense when it comes to our current president. stop “stanning” him

In October, Claudia broke the news that her mother - who was in attendance at the Rose Garden on September 29 during what became a 'super-spreader' event - had tested positive to coronavirus.

“I’m furious. Wear your masks. don’t listen to our idiot fucking president piece of shit. protect yourself and those around you,” Claudia said in TikToks at the time, but later deleted.

Her activity on social media led to worldwide headlines, with Business Insider saying she had proved to be “a communications problem for the Trump administration” and Elle Magazine calling the teenager the “whistleblower of our time”.

Over the past few months, she has shared several videos that directly reference her fraught relationship with her mother. 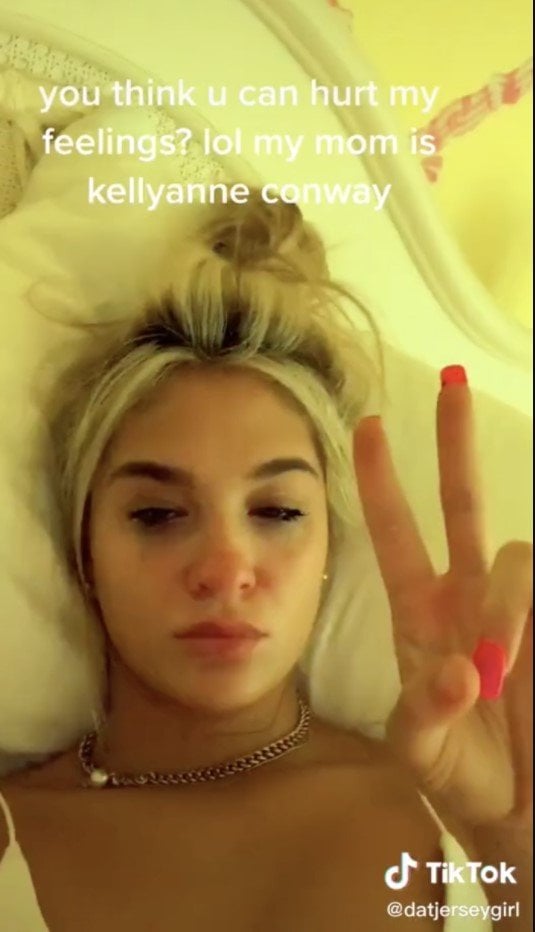 Just last week, Claudia shared a TikTok in which she accused her mother of abusing her. She has since deleted this video too.

"I’m not looking for attention," she said, according to Daily Mail. "I’m not looking for anything. I’m in a situation that is physically, mentally, and emotionally abusive, and I think that it’s important that everyone sees that so I just thought I could put it out there."

"I do live in an abusive household," Claudia alleged.

Now, Claudia Conway has said she is stepping away from social media to focus on her relationship with her mother and to mend their deep divides.

Reply
Upvote
How can a teenager be living in an abusive household which has been documented for millions to see on many occasions, and authorities haven’t done anything? If this was a black family and the kid had a fracture social services would be breathing down their necks, but Kellyanne Conway can abuse her daughter however she likes?

Reply
Upvote
1 upvotes
@cat Can't stand Kellyanne Conway. Notwithstanding that, there are two sides to this story.

Reply
Upvote
1 upvotes
@gu3st yeah, this one's tricky. We really are only getting a tiny snippet of what's going on in their home. A part of me wants to applaud her for calling out abuse, but at the same time, making it so public really inflames things. I hope this situation is being properly investigated.