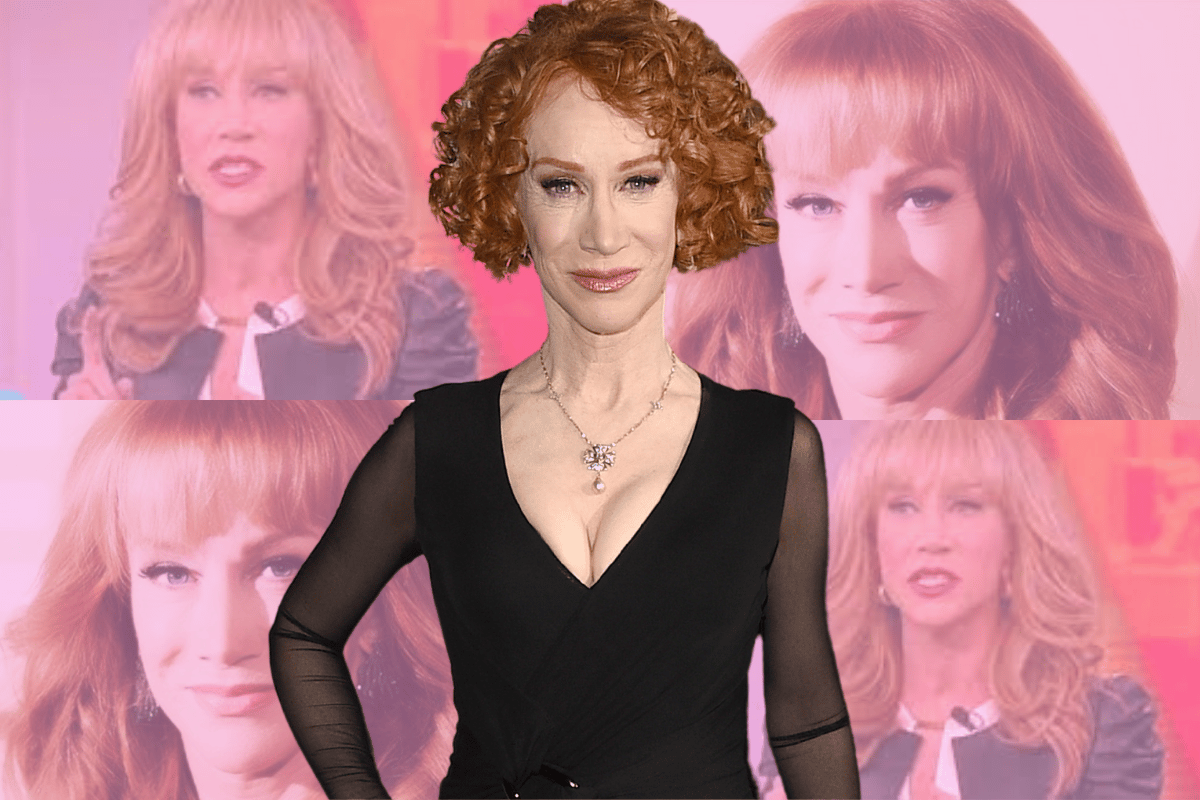 The 61-year-old has used her controversies, woes in relationships, run-ins with celebrities and disdain for conservative politics as comedic material for decades. But recently, it is her own mental health and addiction challenges that she has been discussing most, sharing her experience of becoming a "pill addict" at age 59.

And a lot of her addiction was catalysed by one event in particular.

Watch: Fiona O'Loughlin on the impact of alcoholism. Post continues below.

The lead-up to Griffin's drug addiction was fueled by public controversies.

E! Online's show Fashion Police was a point of contention for Griffin. She became the host of the show after comedian Joan Rivers died, and although Griffin's stint was short, she was swept up in the overall backlash.

When co-host Giuliana Rancic's made racially ignorant comments about Zendaya's dreadlocks at the Oscars, saying the then-17-year-old's hair made her look like she "smelled of patchouli oil… or weed", Fashion Police was on its last legs.

Speaking about her decision to leave, Griffin said on The View: "I kind of felt like I was being forced to comment about pictures of beautiful women in perfect dresses and say kind of bad things. As a feminist and a comic, it just didn't feel like the right fit for me."

Then in 2017, Griffin posed for a picture where she held up a fake prop which was a replica of Donald Trump's severed head covered in blood. She had captioned her Twitter post: "There was blood coming out of his eyes, blood coming out of his … wherever," referencing Trump's inappropriate comments about journalist Megyn Kelly in 2015.

The comedic stunt was met with swift backlash from those across the political spectrum, and she did issue an apology, saying: "I sincerely apologise. I am just now seeing the reaction of these images. The image is too disturbing, I understand how it offends people. I've made a lot of mistakes in my career. I will continue. I beg for your forgiveness. I went too far, I made a mistake, and I was wrong."

The incident affected Griffin terribly, and it was during this time that her pill addiction became very serious.

Griffin had just recently been prescribed certain medication to help treat symptoms of "excessive sleepiness". She was then also prescribed something to help her sleep, and painkillers from previous injuries. Griffin admits she, like millions of people across the world, then became addicted to prescription pills.

I thought, 'Well, I don't even drink… Big deal, I take a couple pills now and again, who doesn't?' It really kicked into high-gear when the Trump thing happened," she said on Nightline. "Prior to then, I'm going to say I was, like, dallying with a pill addiction in a way that wasn't good. But then, after that happened [with Trump], I just thought, 'Who cares?'"

And then COVID happened.

"Not to blame COVID, but then COVID also is like just laying around all day and trying to figure out life. I didn't know what to do with myself," she said this week The New York Times' Sway podcast. "I was just such a crazy workaholic and all of a sudden, I had this time on my hands, and then I was depressed, and things just weren't looking up."

With a now fully-fledged addiction to Oxycodone and Benzodiazepines, Griffin began to spiral. Not only did it impact her relationships and career, but also her mental health. By 2020, Griffin had attempted to take her own life.

"I started thinking about suicide more and more as I got into the pill addiction. And it became almost an obsessive thought. I started really convincing myself it was a good decision. I had all my ducks in a row. I wrote the note, the whole thing. And I just thought, 'I'll just take a bunch of pills, and I will just go to sleep'."

After the attempt, it was a sobering reality check for Griffin, who realised she needed help immediately. 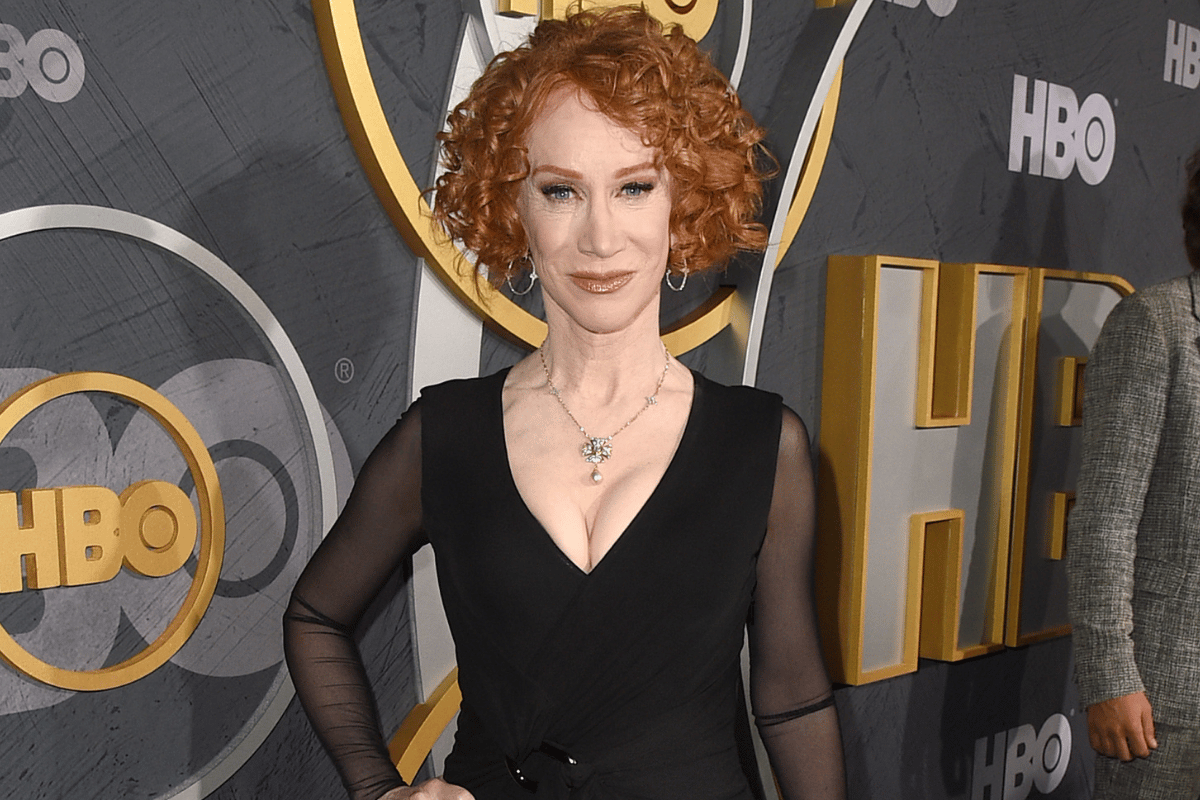 With the help of medical professionals and her husband, Griffin then checked herself into rehab and underwent a detox, which took months of hard work and dealing with withdrawal symptoms.

"I'm there in the hospital psych ward for three days, and boy, that will sober you up like nothing. You have no drugs, you're just shaking, and I'm looking at the ceiling and just reassessing life choices and you have nothing but your own thoughts."

Reflecting on the experience, Griffin said the withdrawal was extremely difficult, but that it saved her life.

"That was rough, although it was a good thing ultimately, and it was sobering, quite literally. I think that I'm probably an addictive person, you know. But you have to admit, it's almost, like, comical. Like, I went in the hospital for pill addiction at 59 years old. Who the hell becomes a junkie in their late 50s? Me. I was doing like a rich white lady speedball, basically. But rehab, that really saved my life."

Just like several other comedians who have used their past trauma as 'comedic inspiration', Griffin told Nightline that being able to laugh even when things go bad is pivotal for her.

"Someday, this will all be comedy. Trust me… I was laughing to stay alive. And what I found is I felt like if I can't make others laugh, then there's no purpose for me to live. I think I'm a resilient survivor. The irony is not lost on me that, over a year ago, all I wanted to do was die. And now, all I want to do is live."

If you think you may be experiencing depression or another mental health problem, please contact your general practitioner. If you're based in Australia, 24-hour support is available through Lifeline on 13 11 14 or  beyondblue on 1300 22 4636.