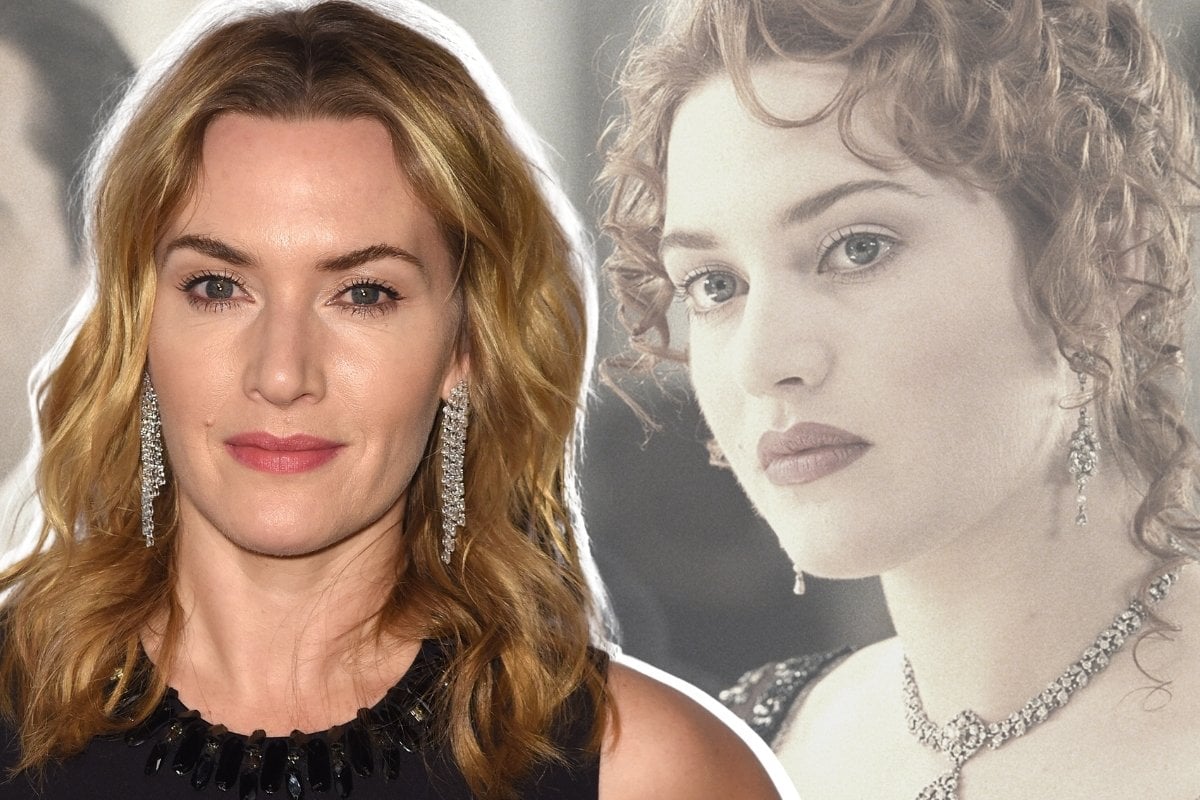 Kate Winslet was making a turkey sandwich when her acting career began. She was 17, working in a delicatessen in Reading in England's south. Her paycheck covered train tickets to auditions in London.

"The phone rang. And it was the strangest thing; there was something about the way the phone rang that I remember thinking, 'Oh, it's for me,'" she told The Late Show in 2017.

"I've got turkey in one hand and mayo in the other, and I look at this [customer], and [say], 'I'm so sorry. I can't make this sandwich for you anymore,' and ran to the telephone."

It was her agent. Less than a year since leaving school to pursue acting in earnest, Kate Winslet had landed a film role. Heavenly Creatures, the 1994 drama directed by the esteemed Peter Jackson.

What happened next is, well, titanic.

Childhood for Kate Winslet wasn't always easy. She grew up in a working-class family, in a crowded terrace house in Reading. Her father was a frustrated actor, her mother a nanny and waiter.

At school, she was mercilessly bullied about her weight.

"I had kids lock me in a cupboard and say, 'blubber's blubbing in the cupboard,'" she told NPR's Fresh Air program. "It was horrible. I would go home. I would cry. I wouldn't want to go back to school the next day. But I knew that I wanted to be an actress one day.

"I had to push those horrible bullies and those awful feelings to one side and just hang on to my dream."

A decade later, in 1997, Kate Winslet became one of the most recognisable actors in the world. She was Titanic's Rose; one of the most famous roles in movie history. She was on magazines, in newspapers, the headline star on an episode of Oprah. Paparazzi camped outside her home, followed her to the shops.

But as the world turned its eyes to the 21-year-old Brit, she wasn't ready to meet its gaze. 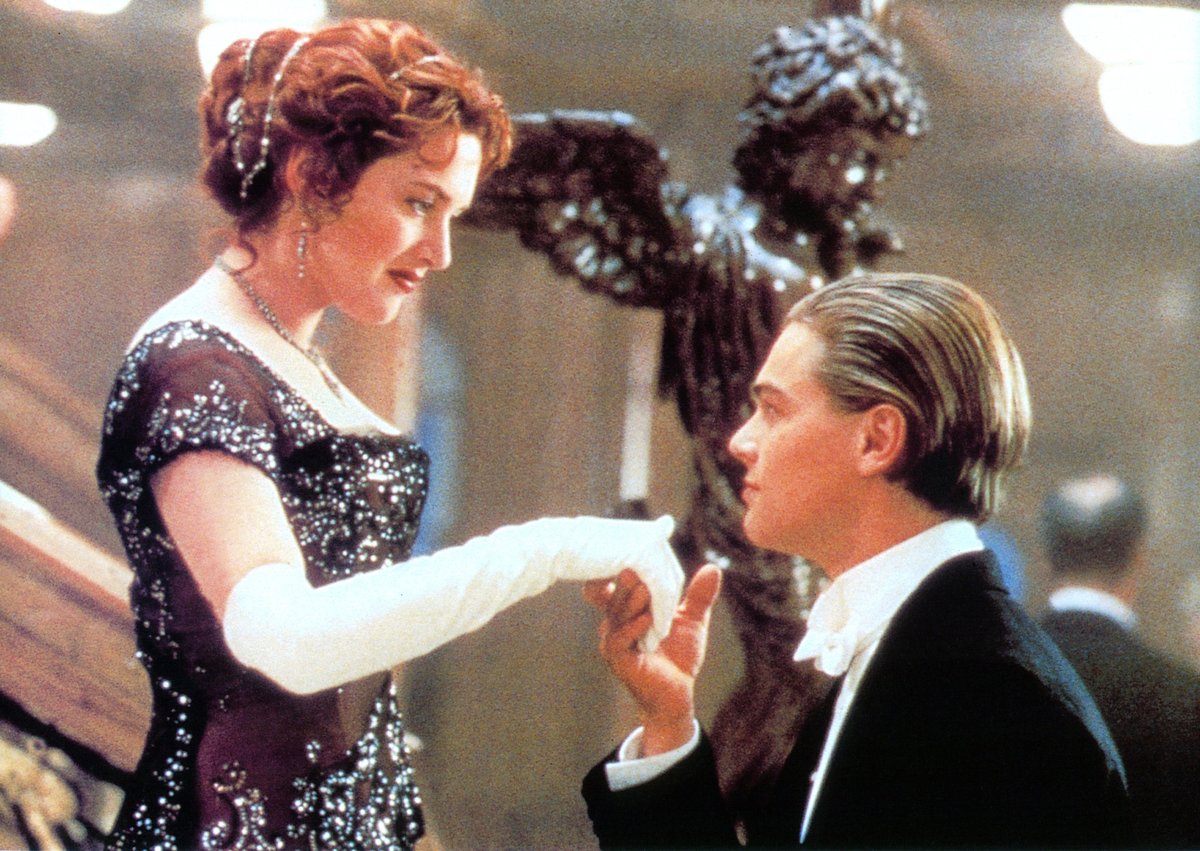 She retreated. Partly for the sake of her career.

Because of her accent, the polished way she speaks, Winslet has often said people assume a pedigree and qualifications that aren't there. Instead, she'd simply learned on the job. Immersion and focus through her role on Creatures. Collaboration and work ethic through Emma Thompson and Alan Rickman on Sense and Sensibility. And then came Titanic.

"I was still learning how to act. I'd only been doing it since I was 17. I felt I wasn’t ready to do lots of big Hollywood jobs," the actor told Marc Maron's podcast WTF. "It was a huge responsibility. I didn’t want to make mistakes and blow it; I wanted to be in it for the long game. I strategically tried to find small things so I could understand the craft a bit better and also understand myself a bit better."

The other part was self-protective.

The attention came out of nowhere. The headlines and glossy-paged articles describing her as "curvy Kate" when the prevailing aesthetic prized the opposite.

"I was subject to a lot of personal physical scrutiny, and I was criticised quite a lot. The British press were actually quite unkind to me, and I felt quite bullied if I’m honest," she added.

"I remember just thinking, 'Ok, well, this is horrible and I hope it passes.' And it did definitely pass, but it also made me realise that if that’s what being famous was, I was not ready to be famous, thank you — no, definitely not."

She was left to defend her appearance in the press, which earnt her a particular reputation.

"In my 20s, people would talk about my weight a lot. And I would be called to comment on my physical self. Well, then I got this label of being ballsy and outspoken. No, I was just defending myself," she told The Guardian this week.

"It was almost laughable how shocking, how critical, how straight-up cruel tabloid journalists were to me. I was still figuring out who the hell I bloody well was! They would comment on my size, they’d estimate what I weighed, they’d print the supposed diet I was on. It was critical and horrible and so upsetting to read."

As a young actress, the physical commentary took a toll, leaving her confidence "damaged".

"I didn’t want to go to Hollywood because I remember thinking, 'God, if this is what they’re saying to me in England, then what will happen when I get there?' Also, it tampers with your evolving impression of what’s beautiful, you know? I did feel very on my own," she told the publication. 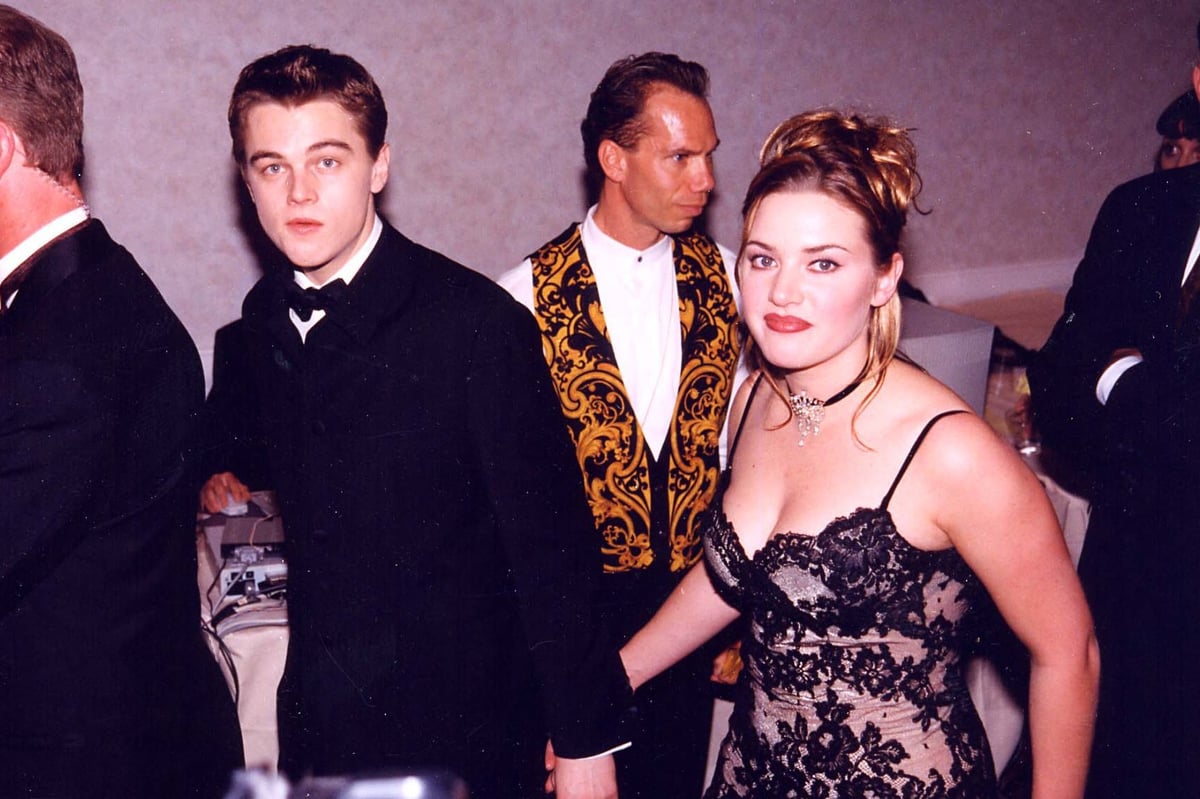 Leo supporting Kate at the 1998 Golden Globes. Image: Getty. At the same time, Winslet was in grief.

At the age of 15, while working on a BBC sci-fi serial called Dark Season, Kate Winslet met Stephen Tredre. He was 12 years her senior, an actor and writer.

They had a relationship for four-and-a-half years, but it ended in early 1997 at Tredre's insistence. He had bone cancer and didn't want her to watch him die.

When he passed on December 8 that year, Winslet missed the Hollywood premiere of Titanic to attend his memorial.

"Stephen let me go, and that as an act of love from one human being to another was overwhelming," she told The Telegraph. "When I look back, I wish he hadn’t. I wish I had just been there. To the bitter end. He was gone very quickly and – I still go over those moments in my head."

Winslet found love again the following year with director Jim Threapleton. Their short-lived marriage was "a mess", she later said, but it brought her a daughter — Mia Threapleton, now 20, who has followed her mother into acting.

Marriage, awards and a fateful fire.

With the birth of Mia, Winslet's priorities shifted. Though she was only 25, the idea of being scrutinised suddenly seemed to matter less. She charged back into Hollywood. Into Eternal Sunshine of The Spotless Mind, Finding Neverland, Little Children.

By 31, she had accrued five Oscar nominations — the youngest person to reach that milestone. At 34 she won, for her performance as a Nazi SS guard in The Reader. 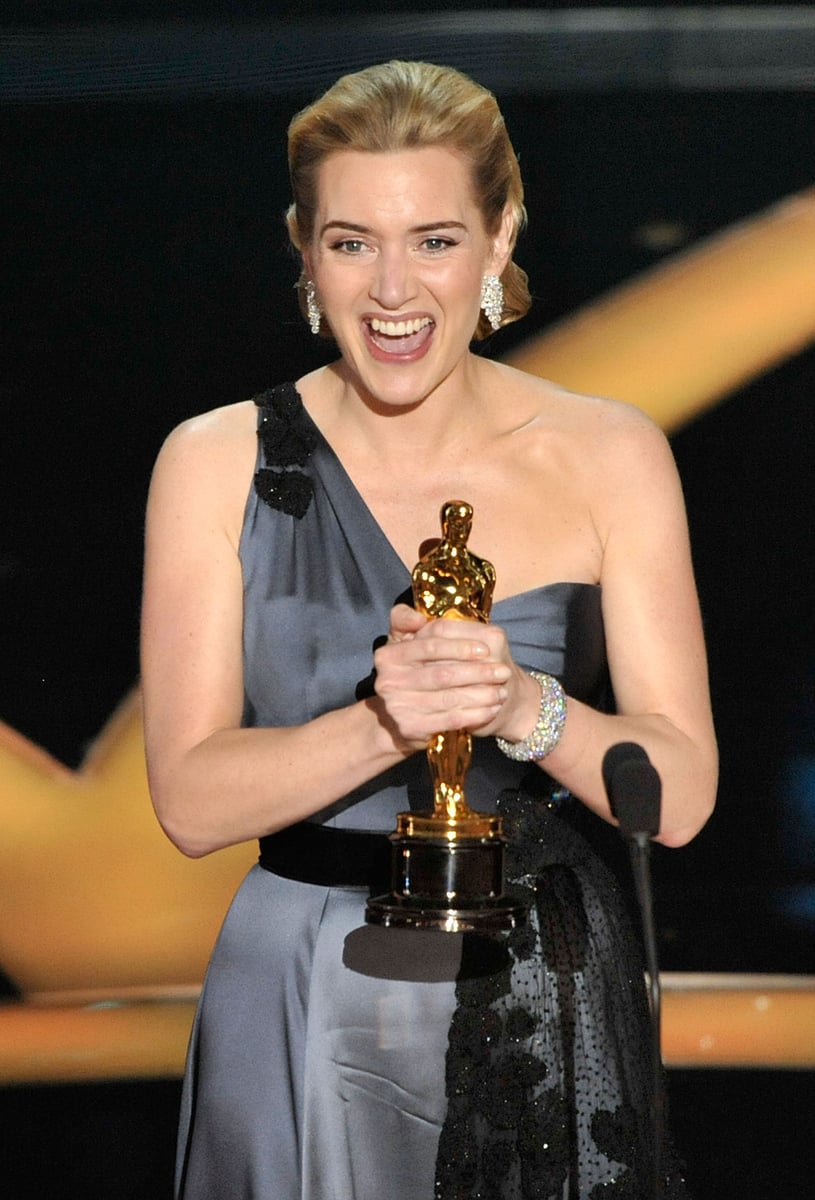 But again, her success played out with a backdrop of personal tragedy.

Her seven-year marriage to director Sam Mendes — father of her second child, Joe — had ended in 2010 amid widely reported rumours that he'd had an affair with another actor.

But the following year, Winslet found another love amid disaster.

She and her two children were staying on Necker Island, a private Caribbean gem owned by billionaire entrepreneur Sir Richard Branson, when lightning struck and ignited a house fire. Winslet scooped up Branson's elderly mother and the four were led to safety by Branson's nephew, Ned Rocknroll (he was born Edward Abel Smith, but legally changed it).

The pair married in 2012 and named their son Bear Blaze — a nod to that night. 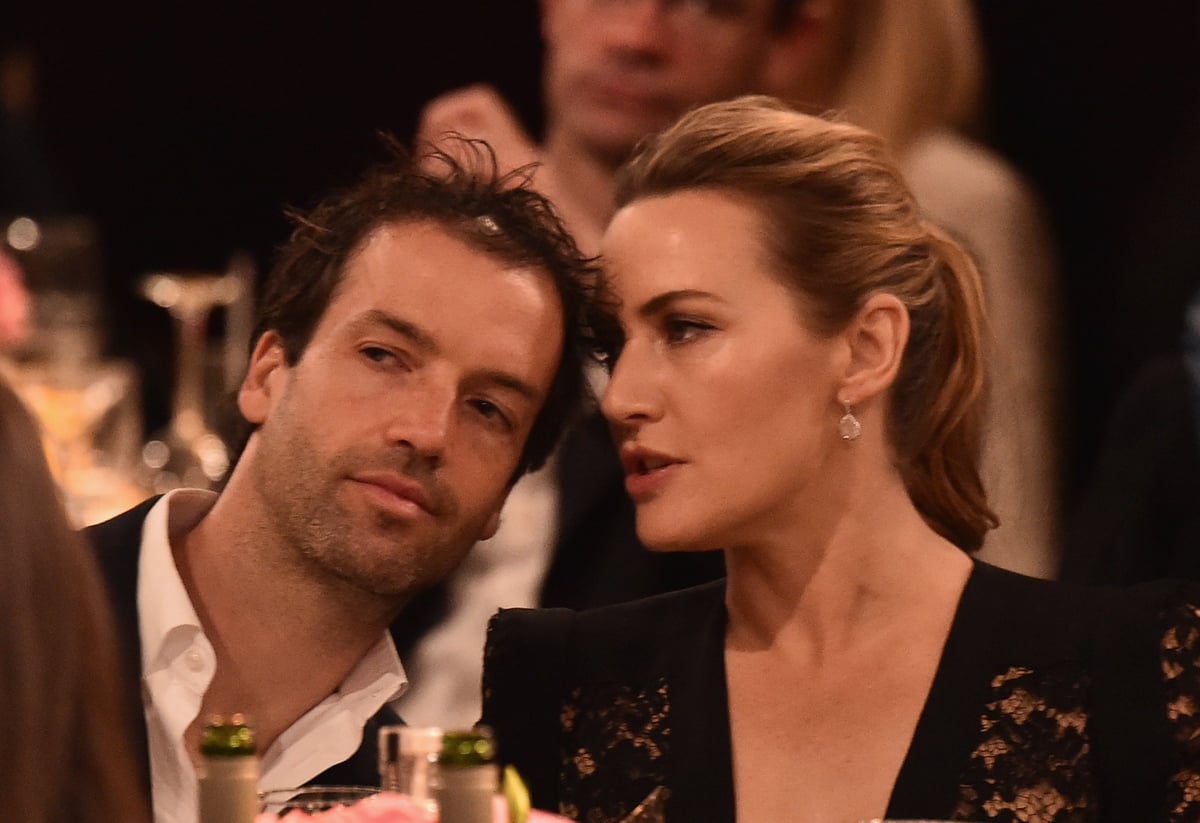 Kate and her husband, Ned, at the 2017 Hollywood Film Awards. Image: Getty.

Regrets? She's had a few.

Winslet's reputation in Hollywood is among the least tainted. Colleagues have described her as unfailingly well-researched and prepared, utterly absorbed by her roles.

But until 2020, there was one shadow lurking over her career. Her relationship and ongoing support of Woody Allen, a man who's been accused of sexual assault by his adopted daughter, Dylan Farrow. And that with Roman Polanski, who remained worshipped in Hollywood despite a 1977 conviction for unlawful sexual intercourse with a 13-year-old girl and, more recently, accusations of misconduct by several women.

In interviews, Winslet separated the allegations from the men's "incredible" work and herself from the need to consider them. But in a September interview with Vanity Fair, she revealed her thinking had evolved.

"It's like, what the f**k was I doing working with Woody Allen and Roman Polanski?" she told the publication. 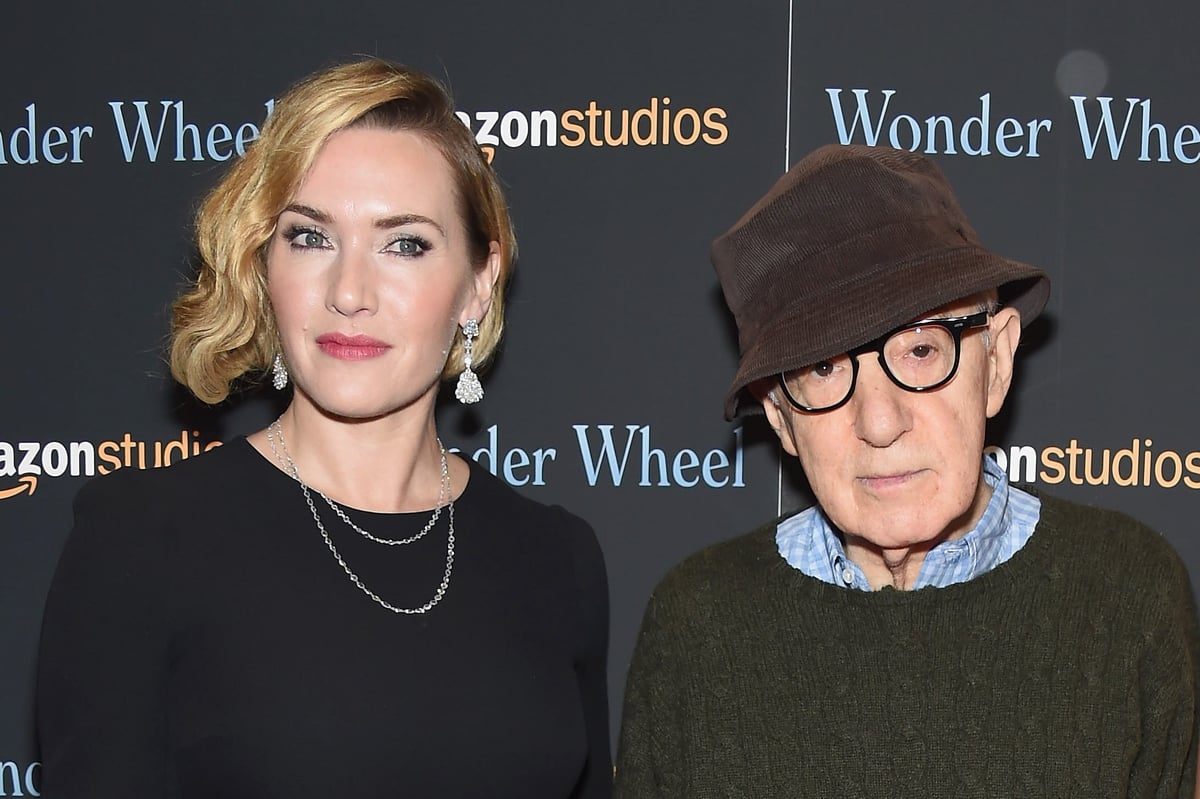 "It's unbelievable to me now how those men were held in such high regard, so widely in the film industry and for as long as they were. It's f***king disgraceful. And I have to take responsibility for the fact that I worked with them both. I can’t turn back the clock.

"I'm grappling with those regrets but what do we have if we aren’t able to just be fucking truthful about all of it?"

In a subsequent interview, she explained that it was during the press tour for Allen's 2017 film Wonder Wheel in which she starred, that she became "crashingly aware" that she shouldn't have done the project. The #metoo reckoning followed shortly after.

"I’d like to do my best when it comes to setting a decent example to younger women," she also told Vanity Fair. "We’re handing them a pretty f**ked up world, so I’d like to do my bit in having some proper integrity."

Winslet is now promoting Ammonite, in which she stars as pioneering 19th-century paleontologist Mary Anning opposite Saoirse Ronan.

Yet again she is said to have been painstakingly prepared. Yet again she absorbed herself into the role. And no matter how trite the phrase "Oscar buzz" may seem in the company of Winslet's name, it's fitting. Yet again.

"It's such a weird job. Why the hell do I do it? It still baffles me," she told Vanity Fair. "I’m still so tormented by it, but I do still love it."

Hanging on to that dream.