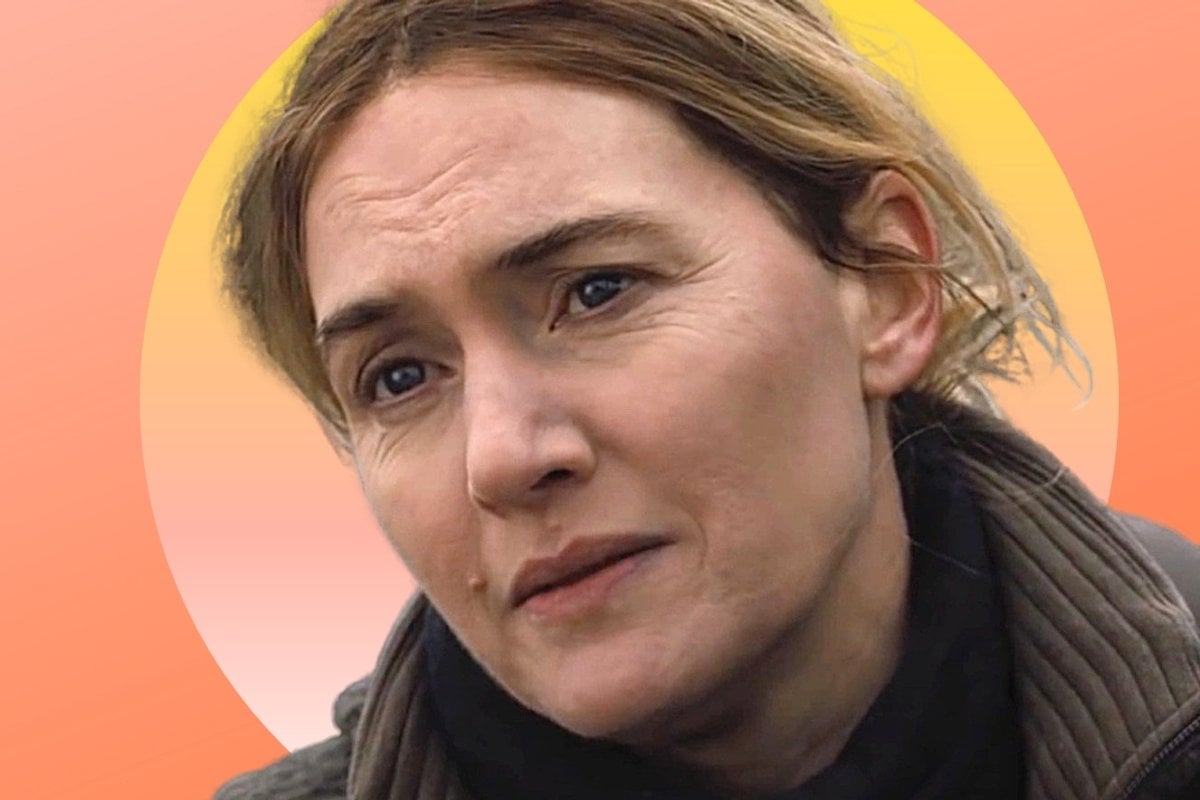 Kate Winslet is done with acting roles that feed into unattainable beauty ideals. She wants to look authentically like her 45-year-old self and to choose characters that do the same.

Her recent role in the critically lauded crime thriller Mare of Easttown is part of this venture.

Watch: Kate Winslet in one of the most popular dramas of the year. Post continues below.

Winslet's character, Mare Sheehan, lives in a fractured community in Pennsylvania under the same roof as her nearly adult daughter, her mother, and her young grandson. A seasoned detective, she lets herself be swallowed by her work, so there's no time left in the day to dwell on her own traumas.

Mare is a woman, Winslet has said, who would glance in the mirror each morning while brushing her teeth, then not again all day. Mare is a woman who pulls her hair back into a rough, rushed ponytail because it's practical and because she probably hasn't shampooed in a while.

"That’s just who she is," Winslet told Indiewire. "That’s like most busy mothers I know — that’s like me. It really is."

In embracing roles like this, Winslet has stepped into a strange Hollywood no-man's land. Behind her is the veneer of polish and glamour. And off in the distance is extra kilos, prosthetics and a stringy wig (you know, the kind of aesthetic that sees women actors lauded for their 'bravery' and dedication to the craft).

It's this in-between that Winslet wants to normalise. It's reality, after all.

"What I observe are people spending a huge amount of time worrying about how they look, with filters. Looking at pictures of impossibly glamorous places to have holidays.

"I worry about that, for younger generations,” she explained. “These unattainable ideals. And I do not want to play roles that feed into anything unattainable anymore. I’m done with that."

As an actor with cachet, an Oscar and (in the case of Mare of Easttown) an executive producer credit, Winslet is in a rare position to take that stand.

For daily pop culture news, catch the latest episode of The Spill. (Article continues below.)

On Mare of Easttown, when the director, Craig Zobel, offered to cut a moment from one of her sex scenes that showed "a bulgy bit of belly", she replied, "Don't you dare!"

And when the promotional artwork came back with her wrinkles erased, she demanded it be redone. Twice.

The hope, of course, is that the next generation of women actors won't even have to make those demands. That audiences will be entirely accustomed to seeing — as Winslet put it — "a fully functioning, flawed woman with a body and a face that moves in a way that is synonymous with her age and her life and where she comes from".

Mare of Easttown is available to stream in Australia on Binge and Foxtel Now.

A
anonymous 8 months ago

Reply
Upvote
2 upvotes
Winslet is a brilliant actor, so much so I didn’t notice her wrinkles. It is so refreshing to see a normal, ageing woman on the screen. The Brits do this the best, American women the worst and are always groomed to the eyeballs. Aussie women are succumbing to it increasingly and they can’t blame men and society when they choose themselves to resort to this ridiculous fakery.
P
paulafletcher6 8 months ago