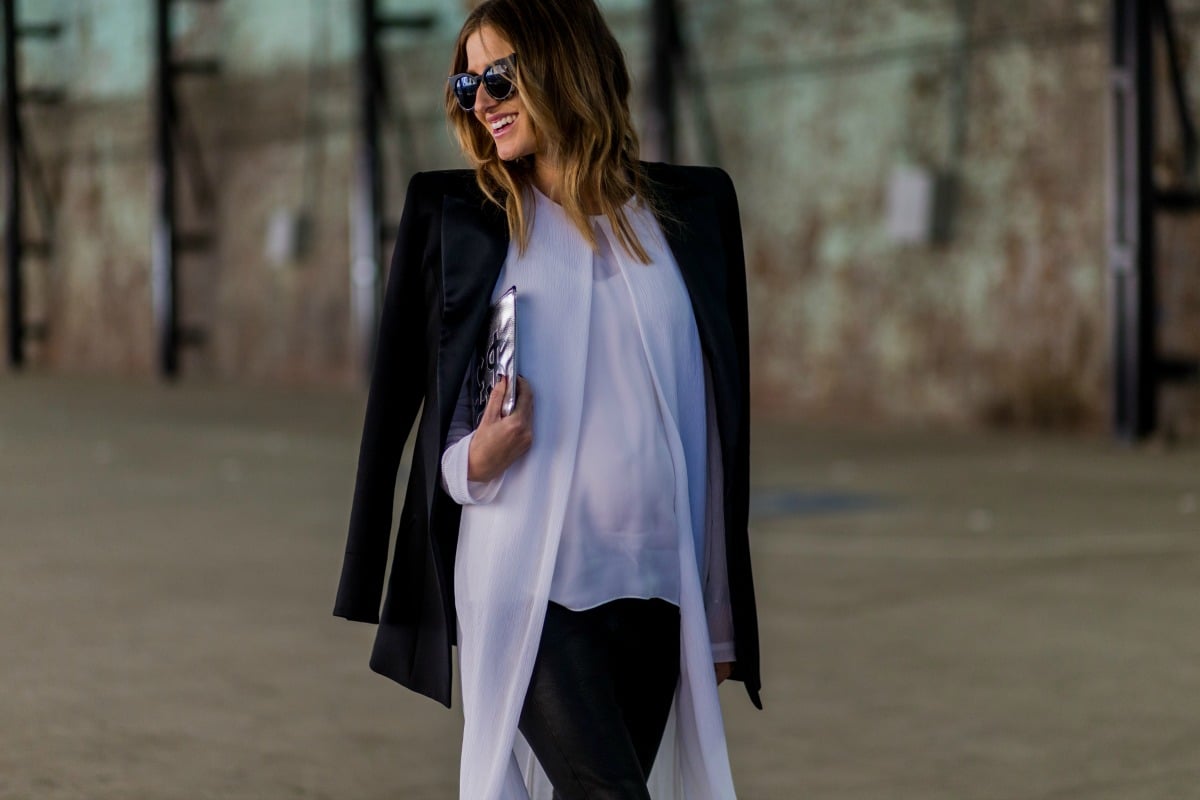 As always, Kate Waterhouse cut a chic figure at Mercedes-Benz Fashion Week this year — but the style writer says she found dressing for the event more of a “struggle” than usual.

That’s because she’s currently pregnant with her second child, a little sister for her two-year-old daughter Sophia Edie.

Sure, most pregnant women don’t have their sartorial choices photographed and distributed throughout the national media, but maternity style can be a tricky beast to navigate regardless of how famous you are — something Waterhouse happily acknowledges.

“Trying to maintain you regular style as your wardrobe slowly diminishes is an exercise in creative thinking,” she writes in her latest blog post.

Fortunately, the style-savvy mum has been kind enough to share the nuggets of wisdom she’s picked up throughout her two pregnancies. Here are five of the key takeaway points she’s posted on her blog.

While it’s tempting to rush out and buy everything and anything with an elasticated waist and a billowy cut, Waterhouse advises against doing so.

“I tell all my friends to save their money and not buy too many pregnancy-specific clothing as they will realistically only wear it for a short amount of time,” she writes.

Instead, she recommends buying a few key staples that will accommodate your changing shape, and then work them in with what you already have. And you don’t have to spend much.

“I found stores like ASOS and Jeanswest had a great range for pregnancy essentials … I found things like a stretchy knee-length cotton skirt, loose tops and knits and leggings were all fantastic in the latter stages of pregnancy,” she adds.

#LubePrimer Is Trending... This Is Why

Watch: The five pregnancy symptoms nobody ever bothers to warn you about. (Post continues after video.)

Alternatively, you can follow Mamamia writer Carla GS’s lead and repurpose a simple black nightie as a maternity wear staple.

Sure, your burgeoning belly might render some of your more closely-cut clothes temporarily unwearable — but that doesn’t apply to all of them, so take advantage of that.

“Things like jackets and coats are ideal for use in pregnancy as they’re generally quite loose and will accommodate a growing frame. It’s a nice silhouette with a bump and will smarten up any look,” Waterhouse writes.

This doesn’t have to cost you a motza either — here are 10 winter jackets you can pick up for less than $100.

3. Don't feel you have to abandon your style

Dressing for your changing shape doesn't mean you need to depart from what you know and love. Waterhouse says although it can be hard to maintain your regular style during pregnancy, or even remember what it was, there are ways to do so.

"A shift dress or a billowy blouse are things that I’d normally wear so I’ve tried to incorporate more of them in my everyday wardrobe as they’re generally bump-friendly," she writes.

"If you’re usually all about colour or wear top to toe prints then maintain that as your fashion ethos and try to find pieces that will still allow you to dress as your usual self." (Post continues after gallery.)

4. ...But maybe leave your favourite shoes aside for now

In a style post she wrote in 2015, Waterhouse admitted some of her shoes hadn't fully recovered from the months she was pregnant with Sophia.

"I wore a lot of ballet flats and brogues during my pregnancy but found that because my feet expanded a lot that my shoes have now permanently expanded too. I’d suggest not wearing your fave flats while you’re pregnant if you want to wear them again post-pregnancy," she added.

Ah, pregnancy — is there anything it can't do to your body?

"A shift dress or a billowy blouse are things that I’d normally wear." (Image: Getty)

5. Steal from your partner

Sure, you might have to buy some new clothes to accommodate la bump, but you could save some dollars by raiding your husband or boyfriend's wardrobe. Hey, if it works for Kate Waterhouse...

"Poor Luke [Ricketson] was a bit low in clothes during pregnancy because I did steal a few items from his wardrobe," she wrote in 2015.

"I used lots of Luke’s t-shirts or shirts and just wore them with leggings. I also borrowed a few of Luke’s jumpers as I didn’t want to buy knits because they were going to be too big for me after the pregnancy. I was very resourceful during that time!"

What's the most useful maternity style tip you've been given?