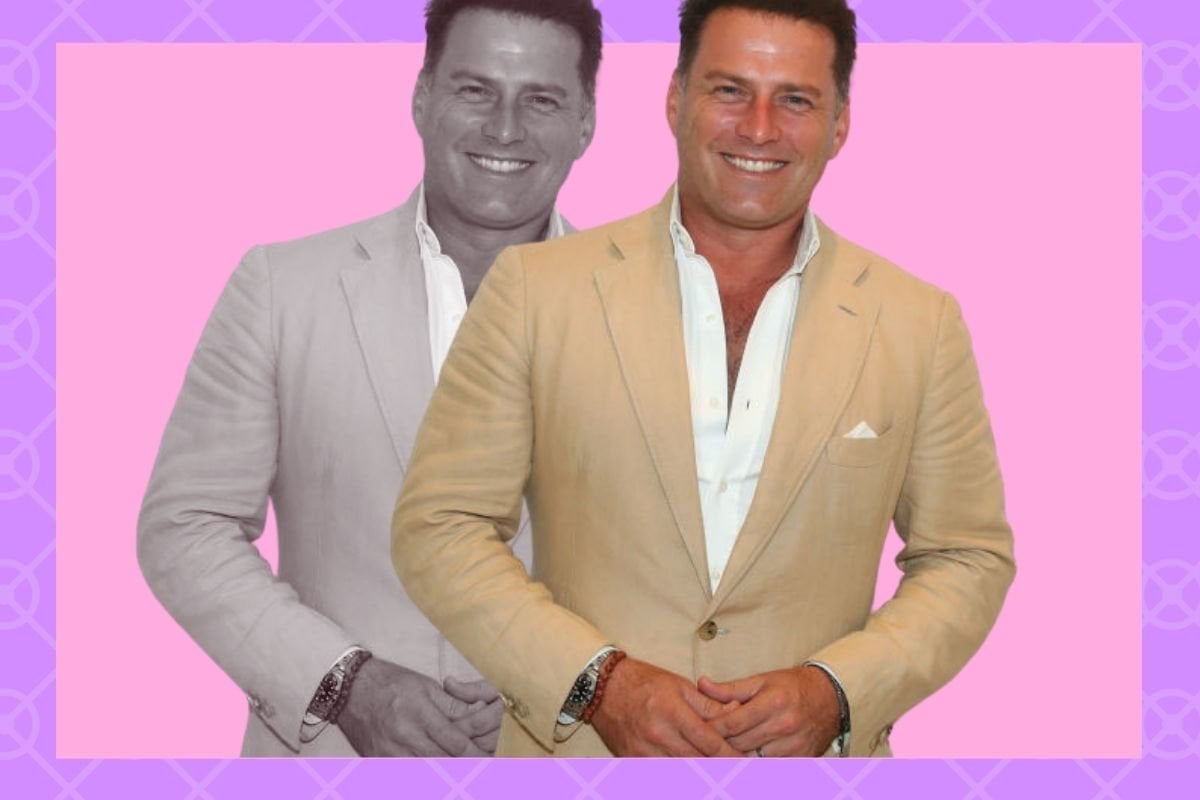 This International Women's Day, Mamamia has pledged to #ChooseToChallenge gender stereotypes. That's why we're flipping the script in the stories you'll find on our homepage today. To draw attention to the ridiculous stories that still get written about women in the public eye, we've written satirical stories about male public figures, using the type of headlines that are still, in 2021, exclusively written about women. You can  read more about our pledge to #ChooseToChallenge gender stereotypes this IWD here.

Karl Stefanovic has shut down pregnancy rumours after fans spotted his noticeable baby bump during this morning's episode of Today.

After a cooking segment on the show, where Stefanovic made bacon and egg rolls with Curtis Stone, fans noticed his obvious baby bump under his navy blue suit, crisp white shirt and maroon and white spotted tie.

"I can't believe he thought he would be able to hide that bump under that suit," said another.

"I wonder who they'll replace Karl with when he goes on maternity leave," added another Today fan.

Australia's resident morning TV bad boy took to Instagram after the show to slam the rumours, saying he'd just had a big breakfast.

"C'mon guys, I'm not pregnant," he said while rubbing his bump. "I just had a big breakfast."

"Curtis dared me to eat six bacon and egg rolls when we went to the ad break and you know I don't like to back down from a dare," he continued.

This is not the first time pregnancy rumours have swirled around Karl Stefanovic.

Just last month, this very publication reported the 46-year-old was expecting after he was spotted wearing board shorts at the beach.

In that instance, Stefanovic blamed the bump on a big lunch and not being a pre-pubescent boy anymore.

"We'd had a really big session at Catalina, and Beau Ryan and I thought we'd have a cheeky little dip at Rose Bay," he said at the time.

"Pregnant with an $80 steak if you know what I mean," he continued. "Giving birth to some Sydney Rock Oysters... hahahaha."

However, a source close to Stefanovic says the morning TV host is pregnant but is keeping it under wraps while he renegotiates his contract with Channel 9.

"Karl knows there's limited opportunities for men on TV once they reach 30. He's heard rumours they're looking to replace him with an 18-year-old with a TikTok following," the source said.

"Being over 40 and pregnant - that's like a nail in the coffin that was once his lucrative TV career."