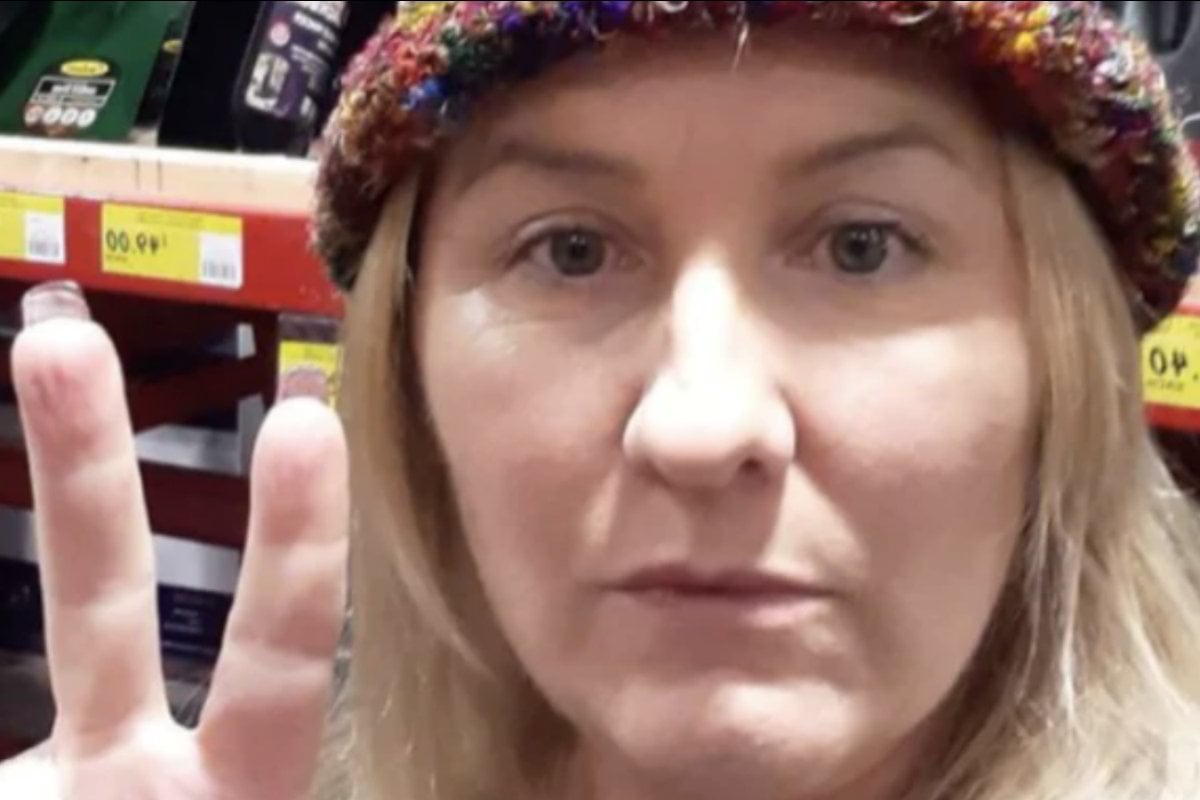 In fact, you've surprised yourself at how angry you are.

It's not just that she walked into a Bunnings store in Melbourne without a mask on. It's that she targeted staff members, who are being employed in the midst of a global pandemic to enforce mandatory face coverings, and began lecturing them about the Charter of Human Rights. It's that she filmed them without their permission. It's that she questioned the Australian government, threatened to sue the workers personally, and cried discrimination. It's that she appears to have been looking to pick a fight on a weekend where 816 Victorians were diagnosed with COVID-19. Fifteen people died. Fifteen funerals. Fifteen families with an empty chair at Christmas. And, ultimately, it's that she was wrong. About everything.

Bunnings was, of course, entirely within their rights to demand she wear a face mask. Private landowners and occupiers are legally allowed to take reasonable steps in order to protect themselves, their staff, and their customers. It was - and still is - a condition of entry that a customer wears a mask.

But our anger extends beyond that.

Watch: The moment 'Bunnings Karen' was cut off on the Today show. Post continues below.

Bunnings Karen is one woman in a city of almost five million. As much as she berated staff with her un-masked mouth, the health risk she posed was likely neglible. We're not angry because we honestly believe she passed on the virus to an entire Bunnings store in Melbourne, although with a sneeze she conceiveably could have.

Our anger is best summed up by the masked Bunnings manager, whose name we don't know and who won't be offered a guest spot on the Today show.

She said, calmly and softly: "We're all just trying to all be in this together".

We're angry because we don't know what happened to us.

What happened to the one thing that made our first lockdown, back in March, somewhat bearable?

In early June, a team of UK and Australian psychologists published a book on what could be learned from our first lockdown.

They found that public solidarity was critical to Australia's success when it came to controlling COVID-19. It was what made us all so resilient.

Surveys found that Australians were far more concerned about other people's health than they were about their own, and showed an enormous amount of concern for one another.

It was also found that in the midst of a pandemic, people actually didn't panic. Australians didn't crack. We behaved in a calm, orderly manner, and did what needed to be done.

The toilet paper hoarding narrative was found to be self-fulfilling. The more the media reported on hoarding, the more people did it. The same might be true of refusing to wear a mask.

We must be careful about the stories we choose to tell.

Bunnings Karen is the exception not the rule. She is vastly outnumbered. The news story became about her diatribe rather than the three calm, kind and law-abiding Bunnings workers who were just doing their best.

Listen to the latest episode of Mamamia Out Loud, where we discuss the Bunnings incident that stopped a nation. Post continues below.

While she takes up space in papers all around the country, we do not see the average Melburnian, going out only when necessary, and wearing a face covering because they were instructed to. We don't see the compliance. The sacrifice. The acceptance by almost everybody, to forgo life's small joys for the greater good. If the viral videos are to be believed, Melbourne would be in a state of anarchy. But it's not. Constitutents of Melbourne and the Mitchell Shire are listening and adhering, a sacrifice which will benefit the entire country.

We are angry at Bunnings Karen because she makes us feel uneasy. Unsafe. She is putting her own personal freedom before social responsibility, while the rest of us are working hard to do the opposite.

But perhaps we ought to pay more attention to where the camera was actually directed.

Believing that we're "all be in this together".

Reply
Upvote
2 upvotes
I'm not angry, it makes me sad as to how pathetic is it. Imagine thinking yourself some kind of hero for not wearing a mask during a pandemic.
R
rush 2 years ago

Reply
Upvote
1 upvotes
@laura__palmer same. And I think anger is what she (and others like her) wants, they want the outrage, they want to stir everyone up. I think we need to laugh at them, find them silly and juvenile, role our eyes - and more importantly, ignore them. Treat them as we would a two year old throwing a tantrum at the supermarket, say 'my goodness, looks like someone needs a nap!', and keep walking. Let them rant and rave to themselves, 'ignore her, dear, she'll soon tire herself out!'. You're right, it's pathetic.
Resources
Very Peri
Skin
News
General
Opinion
True Crime
Politics
Sport
Explainer
Entertainment
Celebrity
Reality TV
Movies
TV
Books
Rogue
Royal
Lifestyle
Beauty
Fashion
Weddings
Home
Wellness
Health
Fitness
Travel
Food
Family
Before The Bump
Pregnancy
Baby
Kids
Teens
School
Parent Opinion
Work & Money
Money
Finance
Career
Lady Startup