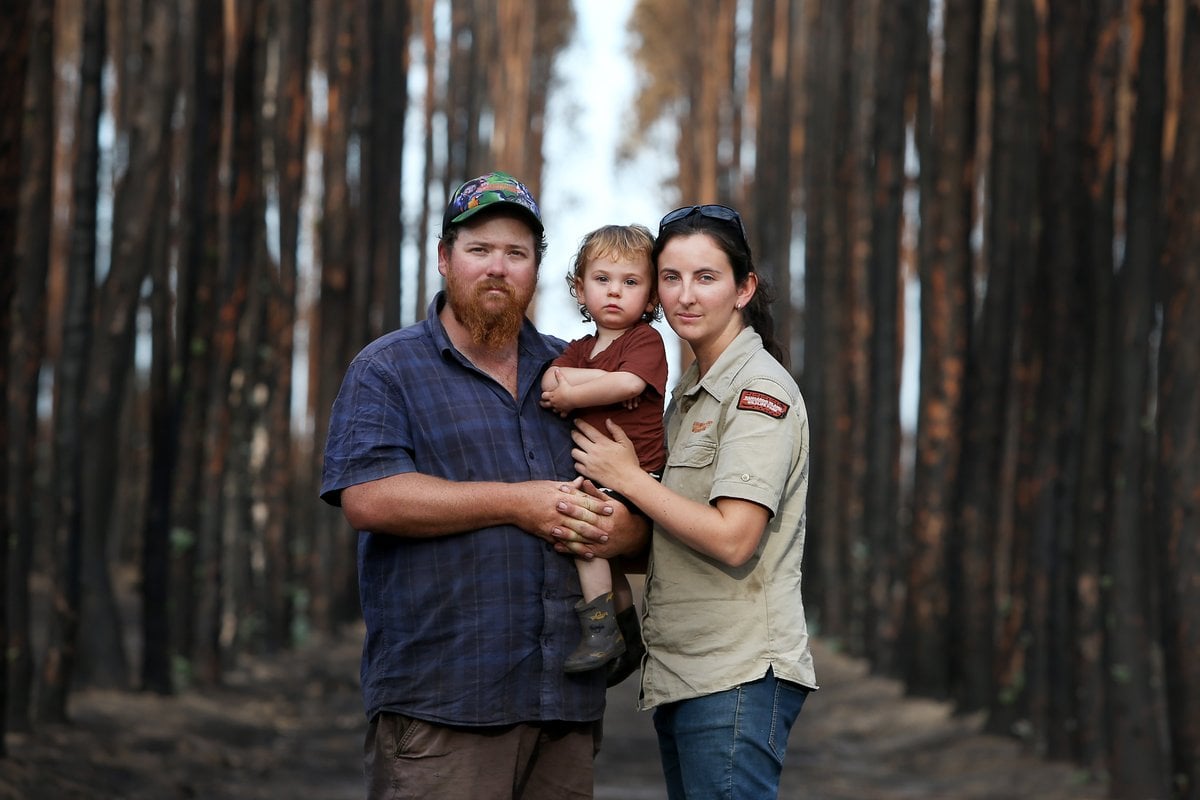 Kangaroo Island is in bloom. The grass is vibrant green, the bottle brush and native yellow daisies are flourishing. Lambs huddle under their mothers, and water pools by the road in soaking rains.

It's postcard picturesque. A view fit for a tourism ad sits around almost every turn.

But this is a place in recovery from back-to-back crises. It embraced the help of the world just 10 months ago, and now, it's throwing open its arms once again.

"The outpouring of support just blew us away."

Silhouetted against all the spring colour are the charcoal skeletons of trees left behind by bushfires that choked the island last summer.

Close to half of KI’s 440,500 hectares were scorched between late December and mid-January as fires tore inland from the western coast. Two people were killed, at least 90 homes lost and most of the once-pristine Flinders Chase National Park blackened.

Over the weekend Flinders Chase National Park re-opened to independent travelers.🌱 Quite a milestone to achieve for our recovery.👏 . To find out information about access, please check out our Bio ☝️ . 📷 @nationalparkssa   . @Australia @SouthAustralia #WelcomeBackSA #KangarooIsland #AuthenticKI #seeAustralia #seeSouthAustralia

A post shared by  Authentic Kangaroo Island (@authentickangarooisland) on Jul 6, 2020 at 12:37am PDT

The toll on the island's famously diverse wildlife was immense. In particular, its 60,000 koalas — among the last chlamydia-free population in the country — half of which are believed to have died.

Hundreds more would have perished were it not for the incredible recovery effort at Kangaroo Island Wildlife Park in Parndana.

Owners Dana and Sam Mitchell were bracing for an influx of injured animals when the fast-moving front roared toward them on January 3.

The day had begun calmly. It was clear and sunny, and the park was packed with tourists. But by the evening, as Dana put their two-year-old son, Connor, to bed, there was ash falling from the sky.

"That’s when I realised it really was coming in this direction," Dana told Mamamia.

"I was just kind of packing things and getting things ready [to evacuate]… And then the smoke started coming in really thick and really quickly. It just got to the point that Sam was like, 'Now! You need to leave now.'"

Sam and his brother remained behind to help defend the park and its more than 600 animals, while Dana fled with Connor to an emergency evacuation centre in the eastern hub of Kingscote, "bawling her eyes out" as she drove.

Fire encroached again on January 9, but due to merciful wind changes, they sustained no losses in either event.

But there was barely a moment to process it all. Once Dana was escorted back through the fire grounds by the Army on January 10, it was straight to work. 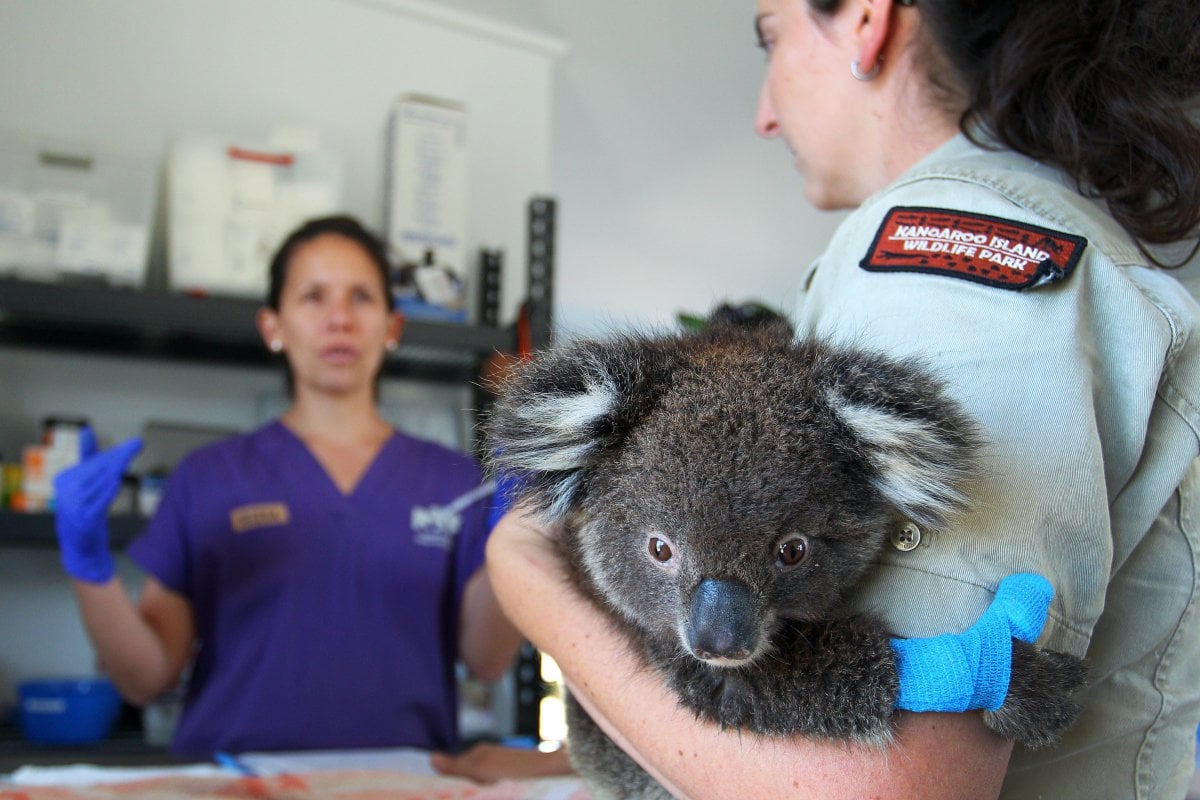 Most of the koalas suffered burns to their paws. Image: Getty.

"There wasn't really time to stop and think about how bad it was all the time," she said. "There were hundreds of animals coming through that needed treatment. So it was just like, 'Okay, well, what can we do?' And all we could do was as much as we could for the wildlife."

The park took in 600 koalas and 150 other animals in the weeks that followed. At their peak, they were caring for 300 koalas at once.

Vets from the local clinic, the Australian Army, Zoos South Australia, RSPCA and beyond came to help, treating burns to their feet, faces and rumps, as well as dehydration, and later starvation.

"We were told to expect somewhere around a 12 per cent survival rate," Dana said, "We got 40 [per cent], so we were pretty happy."

Some 250 koalas were released, and most of the 20 that are still in their care will eventually follow.

Though it was a trying period, the support that followed has buoyed Dana and her team. A GoFundMe page for the Rescue Centre has raised more than $2.6 million.

"It was absolutely incredible. The outpouring of support that we got just blew us away," she said. "Donations came in from around the world — and not just monetary. We had patches and medical supplies and all the different things coming from everywhere… It was crucial to helping us be able to fund the entire rescue operation."

The other recovery effort.

The Wildlife Park is also experiencing a parallel recovery that's happening among Kangaroo Island's tourism and hospitality sector, which has suffered a one-two punch with the fires and the COVID-19 pandemic.

It's been tough. But just like the island itself, industry is beginning to bloom.

As state borders have begun to steadily, cautiously reopen (currently South Australia is welcoming travellers from all states but Victoria), people from around the country have joined locals crossing to KI by ferry or air.

Kangaroo Island has really missed you. If you crave open spaces, natural beauty, stunning beaches and coastlines, interesting walks and hikes, and some pretty damn good food and beverages, then Kangaroo Island is it. And we have some great Welcome Back deals to help you get here. See them here in our Bio 👆 @australia @southaustralia #KangarooIsland #authenticKI #WelcomeBackSA #HolidayHereThisYear #seeSouthAustralia #seeAustralia

A post shared by  Authentic Kangaroo Island (@authentickangarooisland) on Jul 31, 2020 at 2:30pm PDT

The days are getting longer, the water is getting warmer, and the dolphins are waiting! —————— #holidayherethisyear

How blue can blue be? We think there should be a #Pennington blue. This vid by @__serio__ perfectly captures why this a #favouriteplace. Right about now we would love to be with the fisherman down the end of the beach ❤️ @australia @southaustralia #kangarooisland #authenticki #HolidayHereThisYear #SouthernOceanDrive #seeaustralia #seesouthaustralia

A post shared by  Authentic Kangaroo Island (@authentickangarooisland) on Oct 24, 2020 at 1:30pm PDT

Walking trails and beaches are open, as are manmade draw-cards like the Emu Bay Lavender Farm and the award-winning Kangaroo Island Spirits. Accommodation is filling, too, from wilderness campgrounds through to the luxury Oceanview EcoVillas perched on the edge of Nepean Bay.

They are all part of the fabric of this place.

And while they and the entire Kangaroo Island community have a long road to recovery ahead, Australia is already showing up to support them. And Dana is optimistic that will only continue.

"The beaches are just incredible down here, and there's definitely plenty to see. And there's plenty of food and wine, and all sorts of awesome businesses that would very much appreciate the support," she said.

"There's so many amazing places you hear about in Australia — the Kimberley, Exmouth. But Kangaroo Island has its own unique amazingness about it."