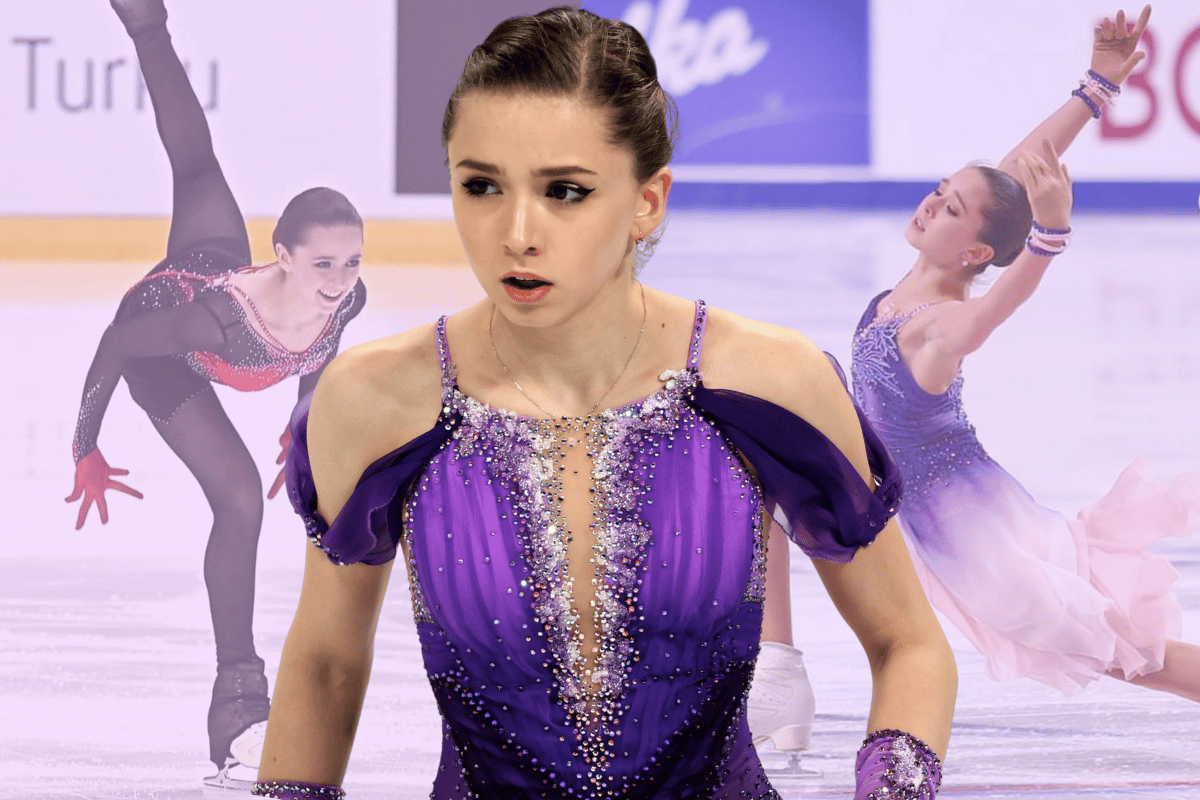 Figure skating is in a league of its own at the Winter Olympics in Beijing this year.

Russian figure skating sensation Kamila Valieva is currently under fire for a positive drug test result, which led to intense scrutiny and a hearing into the alleged doping.

Last week, Valieva became the first woman to land a quad in Olympic figure skating, securing herself a gold medal in the team event. For context, a quad in ice skating is when a skater jumps into the air and spins around at least four times - a pretty tricky feat.

But hours after that incredible performance, it was revealed that Valieva had tested positive at her national championships on December 25. The result from that test was not revealed until February 8. The substance found was the banned heart drug trimetazidine, which is commonly used to treat people with angina or other heart-related conditions.

The storm that ensued from reports of a drug scandal was instant.

The Court of Arbitration for Sport (CAS) held a hearing into the matter soon after the news, where Valieva's team suggested her positive result may have come from a contaminated glass of water that contained traces of her grandfather's heart medication. An Olympic official then confirmed this was Valieva's defence.

"There can be completely different ways [to explain] how it got into her body," her lawyer is reported to have said.

"For example, [her] grandfather drank something from a glass - saliva got in - and this glass was somehow later used by an athlete. Or the drug was laid down on some surface, traces remained, the drug [remained] on this surface which the athlete then drank."

And yet even with a confirmed positive drug test, Valieva was cleared to continue competing by figure skating's top court - a move that shocked many.

Neither Valieva nor Russia's Olympic Committee have been cleared of any wrongdoing. The figure skater will still have to face justice for the drug test. But the fact she was still cleared to compete while waiting for her case to be resolved feels pretty problematic.

The positive drug test is not a good look for the Russian Olympic Committee.

Currently, Russia is not on great terms with the majority of the Western world for a number of reasons.

For one, its serious threats of war with Ukraine. Two, the jailing and alleged poisoning of Russian Opposition Member Alexei Navalny by the alleged request of Vladimir Putin. Three, the fact Russia is infamously known for drug scandals - like the one taking place right now.

The Russian Olympic Committee, also known as ROC, is the name for Russia at the 2022 Winter Olympics. The ROC is a loophole that allows Russian athletes to still compete at the Olympics, without representing their country.

The ROC was implemented because Russia was banned from competing in several international events by the World Anti-Doping Agency (WADA) in 2019 after investigators found the country had tampered with drug-testing data linked to positive doping tests involving over 1,000 athletes.

Instead of the Russian flag, the ROC is represented by a flag featuring an Olympic flame in Russian colours above the five Olympic rings.

In a statement about the case of Valieva, the ROC said: "The Russian Olympic Committee is taking comprehensive measures to protect the rights and interests of the members of the ROC Team, and to keep the honestly won Olympic gold medal."

But unfortunately for the world's sporting elite, a small statement like this will do little to ensure trust in the ROC is regained from fellow Olympic-participating countries.

Fellow figure skaters at the Winter Olympics feel the decision is unfair.

US coach Adam Rippon, who won Olympic bronze four years ago and now coaches Valieva's competitor, has been the most vocal critic.

Listen to The Quicky: Athletes and drug tests. Post continues after audio.

"I don't know how the Olympics recovers from this," he said, as quoted by The Guardian. "It is shocking, and it is disappointing. I don't think ever in the history of the Olympics somebody with a positive test has been allowed to compete."

British skater Natasha McKay agreed, adding: "I wish it was a level playing field, and it's not. I have sympathy for whoever will be on the podium who won't be receiving their medals. It's the most important part of the Olympics and they won't get that chance."

During a press tour, Swedish skater Josefin Taljegard said: "I think fair play is important. Something inside me thinks it's sad. I try to be a good role model. I just want everyone to know that figure skating is a lovely sport. These negative things take away from that."

The case has prompted a frank discussion around age requirements at the Olympics.

Amid all this drama, it's easy to forget that Valieva is only 15.

US coach Adam Rippon also expressed sympathy for Valieva, suggesting the blame should be levelled at her team.

"All of our hearts are breaking that this is a 15-year-old girl. It feels like she was taken advantage of and given this drug that she had no business taking. What this says is that the team around her are child abusers. The only thing they care about is performance, and not the health and wellbeing of their athletes. They are a factory that pumps out children who can compete, up to a certain point," he said.

The case of Valieva isn't the first where commentators have questioned just how young some of Russia's athletes are.

Recent Russian Olympic medalists have burned out and retired from figure skating in their teenage years.

Based on previous historical cases, this may be Valieva's only opportunity to compete at a Winter Olympics. The next one is in 2026, and by then she would be 19 - very few Russian figure skaters are still competing when they reach that age. It just may be that the next batch of incredibly young and impressionable athletes will replace her.

With this in mind, a consensus has appeared to emerge among several skaters at the Winter Olympics. US figure skater Karen Chen said lifting the minimum age was definitely a conversation among her fellow competitors: "I'm 22, which is considered older compared to these other lovely women that are competing here. I absolutely believe that there should be an age limit."

Ultimately, the decision for Valieva to compete regardless of the positive drug test was partly hinged on her designation as a "minor," which was defined as a person under the age of 16.

And on Tuesday night, Valieva wound up earning 82.16 points - more than eight points off her own world record, but more than enough to top the field.

With this in mind, Valieva remains the clear favourite for the gold on Thursday, but if she finishes in the top three, no medals will be awarded, with the podium put on hold until the full investigations into the ROC doping case have concluded.

Reply
Upvote
Wow, I am floored. Whether she took the drug intentionally or not, the fact is it is in her system, potentially giving her an advantage. She shouldn't be competing fullstop and whether any sanctions are imposed is a different question.
How horrible for the other athletes to have to miss out on receiving medals - literally the main goal of competing! They'd be devastated.
C
cat 3 months ago

Reply
Upvote
@any1 it doesn't really give her an advantage. It slightly improves blood supply to the heart, it would be next to useless in a teenager.  Some of the things they test for are a bit insane, people have had their wins stripped in the past because they took  over the counter cold and flu medication.
S
snorks 3 months ago

Reply
Upvote
1 upvotes
@cat according to the doctor - 'The drug helps in the metabolism of fatty acids. And by doing so, it can actually help the ability of the body to use oxygen, which can help performance.'
Seems like a good reason to ban it.
S
snorks 3 months ago