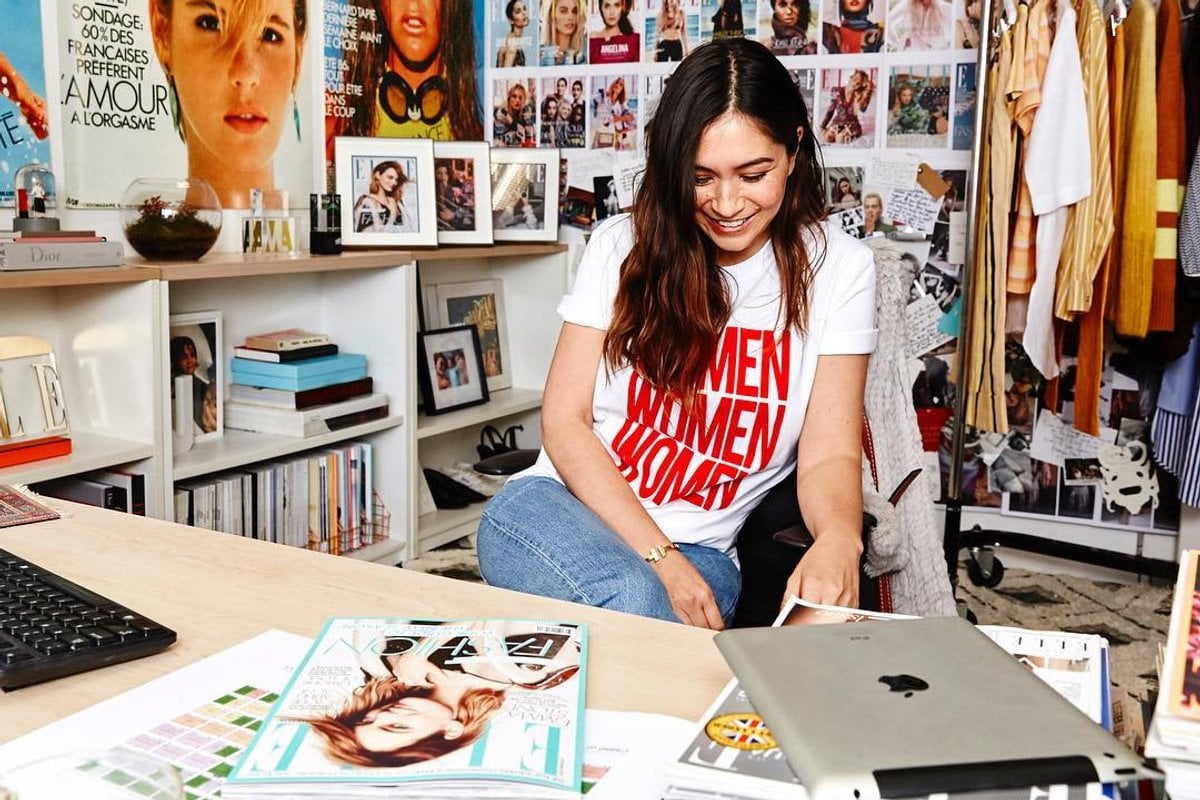 I was under no false pretences. Elle was a massive launch for the company and I knew that management was hoping for a big international name to announce as the editor. I was aware that an internal promotion wasn’t quite the sexy announcement they’d hoping for. But, in my head, I was the only person for the job.

Rumours would circulate about other potential editors and I’d feel physically sick and wish bad things upon perfectly nice people. Time passed without much happening except for me getting on important people’s nerves. I made another enormous pitch document, this time with thirty-one pages, in case thirty hadn’t adequately done the job. I continued to hear crickets.

While all this was happening, I got it into my head that I wanted to have another baby. I was terrified of a pregnancy getting in the way of the job I knew was supposed to be mine but the process—if it was happening at all, which I didn’t know because I’d become so annoying that no-one would tell me—was taking so long I figured I had to chance it.

At the rate the company moved in these matters, I knew I could very well be menopausal before a decision was made one way or another. I decided to take the leap and work it out—if it ever happened—later.

Besides, ACP had a solid history of pregnant women making good editors: Ita Buttrose became pregnant just months after launching Cleo—much to Kerry’s chagrin who apparently complained that she must not have read the story on contraception in her own magazine—and paved the way for working mothers in Australia. If Ita could do it with a magazine named after a long-dead Egyptian queen, I could do it with a masthead as chic and modern as Elle.

So I fell pregnant, hoping that a decision would be made quickly so that I could launch the magazine before the baby came. And then as the pregnancy progressed, I hoped that the decision would drag out so that I’d be able to hold off starting on the magazine until after I’d taken some maternity leave. In the end, it was a week before the baby’s actual due date—the worst of all the possible timings—that they finally called and asked me to prepare a final presentation for the teams at Hearst in New York and Lagardère in Paris. It’s lucky that all my children come late.

Scout conveniently held off until I was done with my third pitch document—I’m not sure if anyone ever even read the first two—ten days after his due date. And still nothing happened.

And then the phone finally rang.

It was mid-summer, stinking hot and I answered it sitting on my sofa in nothing but a pair of maternity knickers because I was three weeks out from having given birth and I didn’t have anything weather-appropriate that fit me yet. I had mastitis and I was holding cabbage leaves up to my naked, burning boobs.

The heat and the cabbage were not a great combination, aromatically speaking. But the caller had exciting news: the Elle teams from New York and Paris were flying into Sydney to meet with both potential advertisers and the ed-in-chief candidates. I was being summoned into the office to give my best Power Editor performance for them in just a few days’ time. I hung up the phone and stared down at myself—my swollen breasts, the granny pants, the general aura of having lost any sense of self-respect—horrified but ready. It might not have looked like my moment, but I knew it was.

I cleaned myself up, bought a dress that fit and put a brush to my hair. The interviews went well. I got on with the Americans and the French like a house on fire. I felt like finally people other than me understood that this was the job I was born for. And afterwards... still nothing.

The enforced showers had renergised me though, and two weeks later, I decided to take the situation in hand. New York Fashion Week was coming up. I’d been there every February for years, always with my friend Bron, the editor of Cosmo, where in between the shows we’d walk through the snow in Central Park and eat in all the restaurants we’d read about on Grub Street.

Bron and I spent every Valentine’s Day for the better part of a decade drinking bellinis at Pastis after a long day of fashion shows. It was a very romantic time in both our lives.

That year, Bron prepared to go to New York without me while I sat at home despondently with a new baby, lamenting the ratio of dream job offers to maternity pads in my life. Her bosses at Hearst happened to be the same people who were the key decision-makers when it came to Elle. I knew that like any good girlfriend, she’d sing my praises while she was there, but the window of opportunity was barely open at this stage and I wished I could do the talking for myself.

One day, the baby and I had a good long chat about it and we decided between us that having waited this long and tried this hard, I may as well go all-in. I packed a hand pump, left the baby and the other boys in the capable hands of my husband and flew myself to New York for two days, tagging along with Bron to the Hearst offices and her work dinners like that annoying fly buzzing around your head you can’t seem to swat away. I was going to make them love me. Or if not, I was going to eat my weight in Red Hook Lobster Rolls.

Thank god for that wretched pump. Scout was only six weeks old. I’d used my electric pump like mad in the lead-up so that he’d have enough frozen breastmilk to cover the days I’d be away and this meant that by the time I actually got on the plane, my boobs thought they were feeding octuplets.

I had to pump constantly if I wanted any relief or at any time when I required my arms to hang straight by my sides. I pumped in the toilets at Hearst, I pumped in the change rooms at Saks while Bron demanded a deranged stream of different sizes from the salesgirls in an attempt to buy me more private time in the cubicle, I pumped over fries at The Spotted Pig and cocktails at PDT, while waiting for my foie gras and brioche-stuffed chicken at The NoMad, and with one hand while lying on Bron’s hotel bed eating Magnolia Bakery Banana Pudding with the other. (Really, there’s no city on Earth better to be in when you’re eating for octuplets.)

Then we’d surreptitiously pour that liquid gold down the loo or the gutter on Broadway or Sixth Avenue or wherever we happened to be and I’d get straight back to convincing Hearst why I was the only woman for the job. And it worked.

I finally started in the role that I’d been dreaming of for more than twenty years when the baby was three months old—straight into a relentless cycle of hostile press interviews, budget negotiations, content plans that needed to be approved across three continents and an intense nationwide advertiser roadshow where I soon learned that my let-down reflex was triggered by boardroom nerves and if I didn’t wear two layers of black and multiple breast pads, a milky explosion was guaranteed to happen just as I got to the climax of my presentation.

This is an edited extract from Semi-Gloss: Magazines, motherhood and misadventures in having it all by Justine Cullen published by Allen & Unwin, out now. 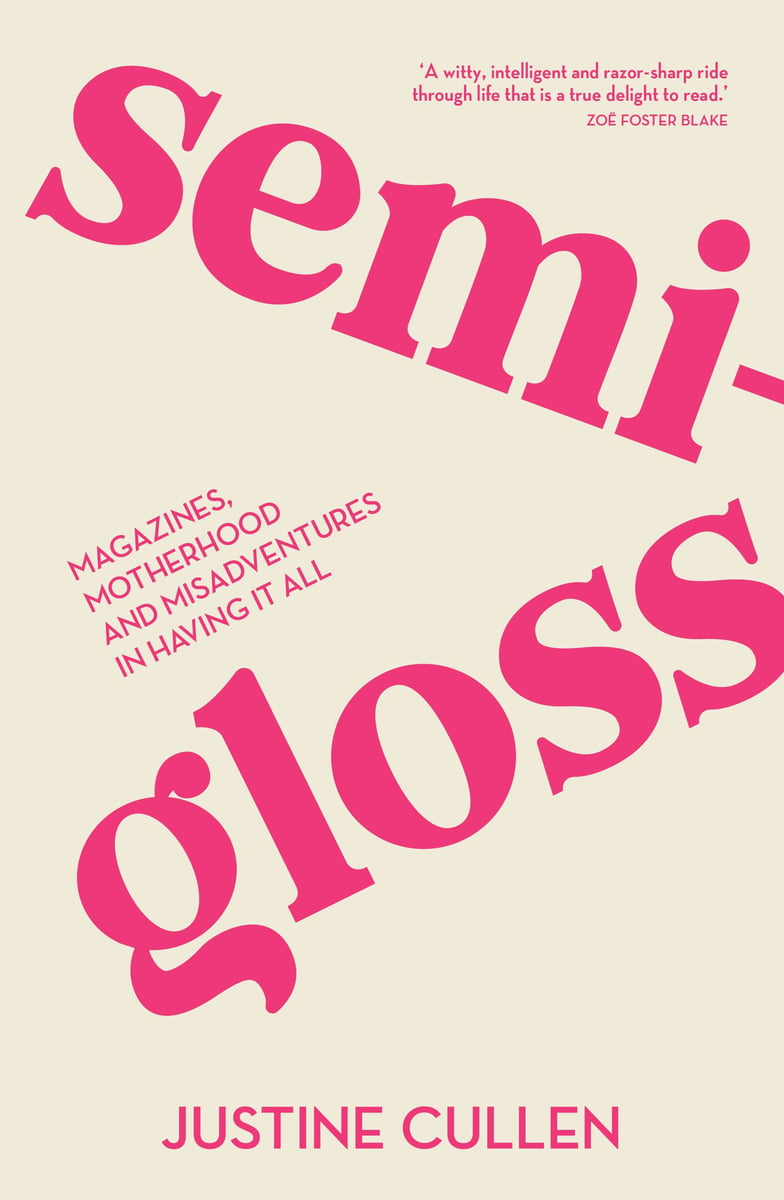