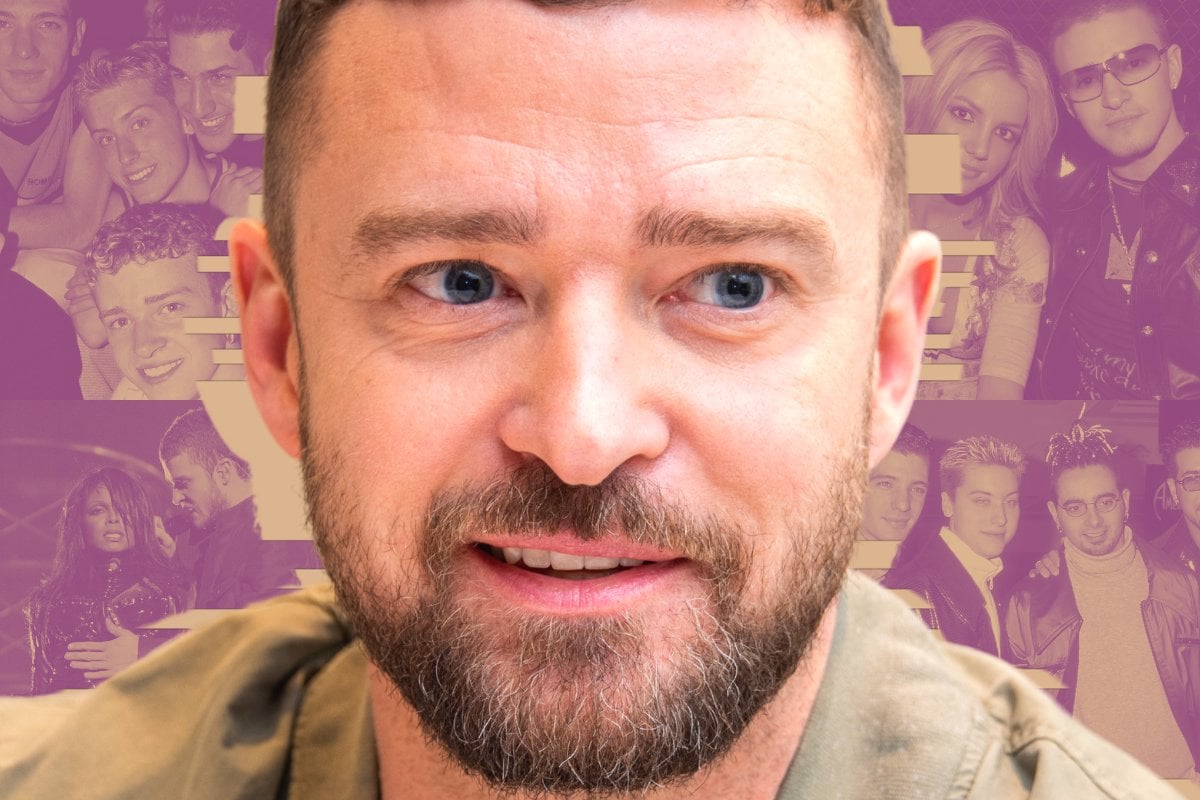 In August 2002, Justin Timberlake performed at the MTV Video Music Awards, where he premiered his debut solo single for the first time.

Singing 'Like I Love You', the moment marked the beginning of the singer's successful, enduring solo career after a stint on The All-New Mickey Mouse Club show as a child and years of fame with boy band NSYNC.

He was from that performance, a solo star.

What followed was years of popularity, dozens of singles, a film career and a number of controversies, after which he always emerged unscathed.

But in 2021, Timberlake's reputation has taken a series of knocks as people re-evaluate the treatment of celebrities, especially in relation to women and minorities.

The shine of Timberlake, now 40, has worn off, leaving an uncomfortable tale of a man who continually succeeded off the back of other's losses.

A reframing of Timberlake's story entered the mainstream after New York Times' documentary, Framing Britney Spears, delved into the treatment of his ex-girlfriend during the 90s and 2000s.

Timberlake came up partway through the documentary, as he always will in Spears' story. The pair - the lead singer of one of the most popular boy bands in the world and world's biggest popstar - were as close to royalty as it got in America at the time they dated. They were the very definition of pop royalty, and the media attention was immense.

It was also very different for both of them.

In Framing Britney Spears, we see Spears being asked about her virginity at a press conference. Her body and her sex life were tabloid fodder and water cooler topics.

Timberlake mostly avoided talking about their relationship until 2002, after their breakup and while he was launching his solo career. 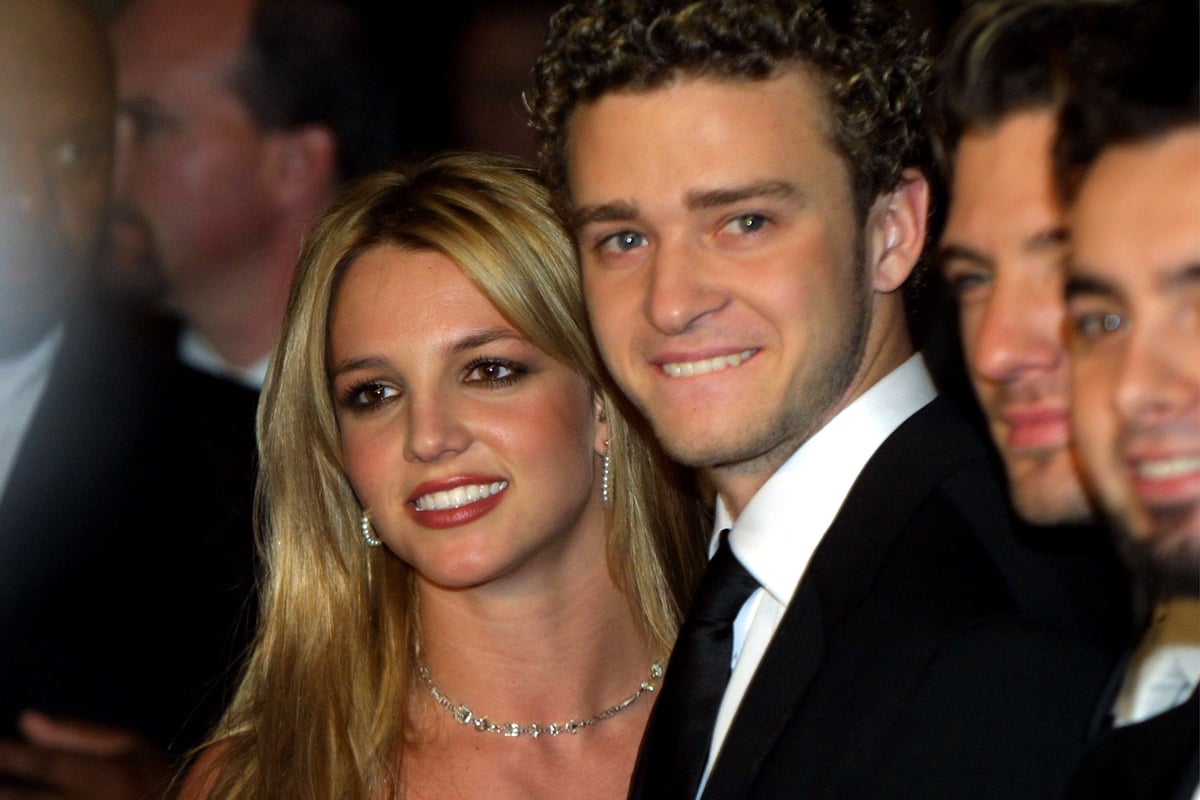 Britney Spears and Justin Timberlake in February 2002, one month before they broke up. Image: Getty.

Unsurprisingly, his biggest single of this period directly addressed the split too. In 'Cry Me A River', Timberlake sings about the end of their relationship and in the video, he cast a Britney look-a-like.

Spears later said she was blindsided by the video. She felt the song gave an unfair depiction of her, but said Timberlake was a clever marketer. He knew that'd sell records, and he was right.

The controversy landed him a radio interview for the Star and Buc Wild Morning Show. An urban contemporary show, it was a space Timberlake would never have found himself during his boy band days and he clearly enjoyed being there.

Timberlake laughed, initially indicating he wasn't going to answer. Pressed again, he gave in: "OK, I did it," to cheers from the hosts.

He once again spoke about their sex life in an interview with New York radio station Hot 97, this time in more detail and with more confidence, sparking a disgustingly one-sided media storm.

"The way that people treated her, to be very high school about it, was like she was the school sl*t and he was the quarterback," New York Times critic at large Wesley Morris explained in Framing Britney Spears.

In short: Timberlake was applauded, while Spears was ridiculed.

The misogyny is perfectly laid out on the cover of Details magazine, which touted Justin as a man who can be forgiven for his "sissy music" because he "got into Britney's pants". Gross. 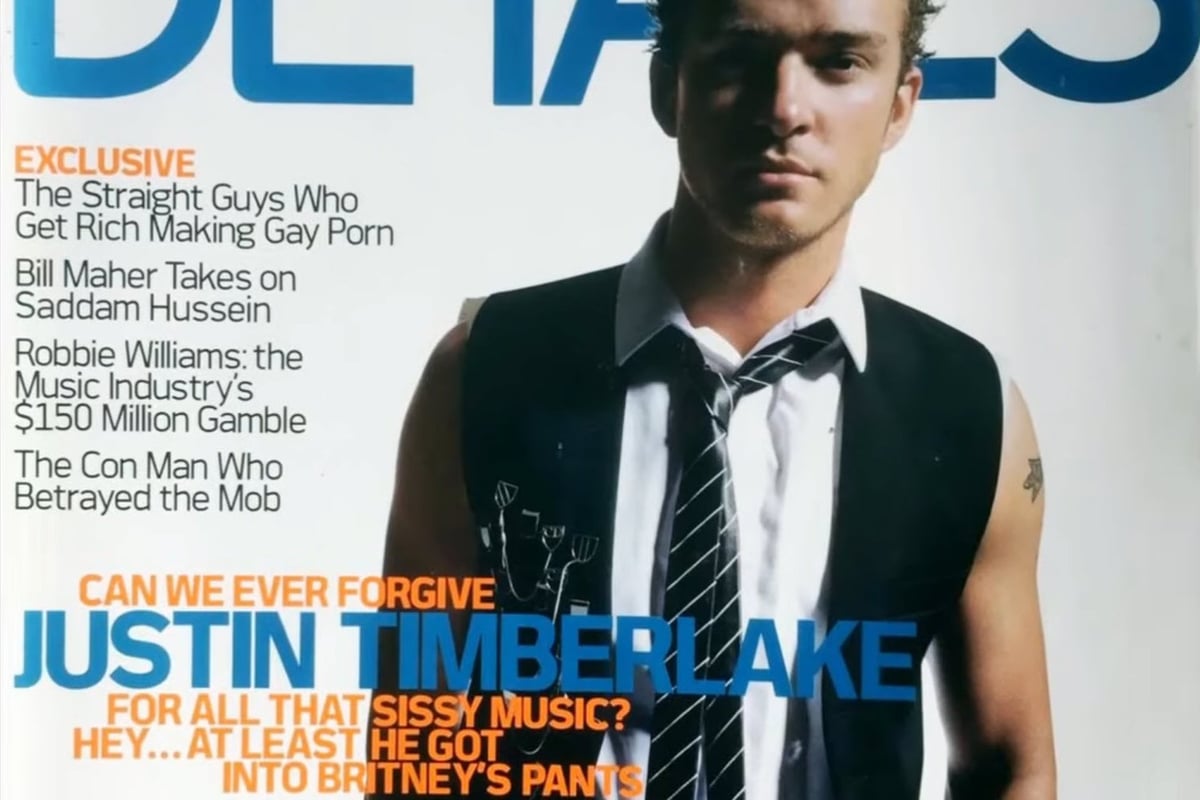 But at the time, no one really batted an eyelid. This was, unfortunately, indicative of the culture in 2002.

In 2004, the now infamous "wardrobe malfunction" during his SuperBowl performance with Janet Jackson took place.

Timberlake apologised for this. Doing so was allegedly part of an agreement with the Recording Academy to allow him to be onstage to accept his Grammy awards that year, but we don't even need hindsight to realise this was underwhelming.

"I know it's been a rough week on everybody," he said, smirking. "What occurred was unintentional, completely regrettable, and I apologise if you guys were offended." 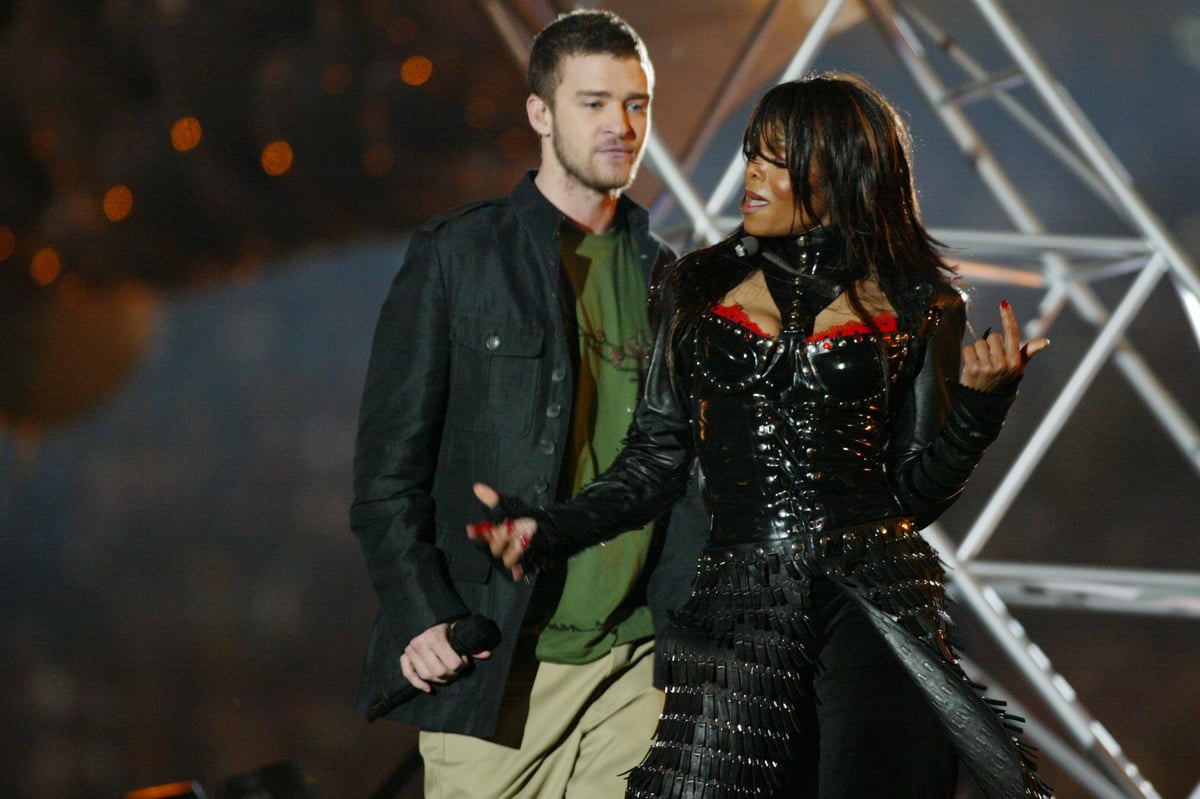 He gave no mention of Jackson, who had faced an onslaught of negative press after the show. She was fined and blacklisted by US radio and MTV, while Timberlake's career continued to go from strength to strength.

There was a long period during the mid-late 2000s where it was impossible to avoid Timberlake's music, and the SuperBowl invited him back to perform the Halftime Show in 2018.

For years, Timberlake coasted his way to success. Opportunities presented themselves and each time, a win was as guaranteed as it can be in a fickle place like Hollywood. 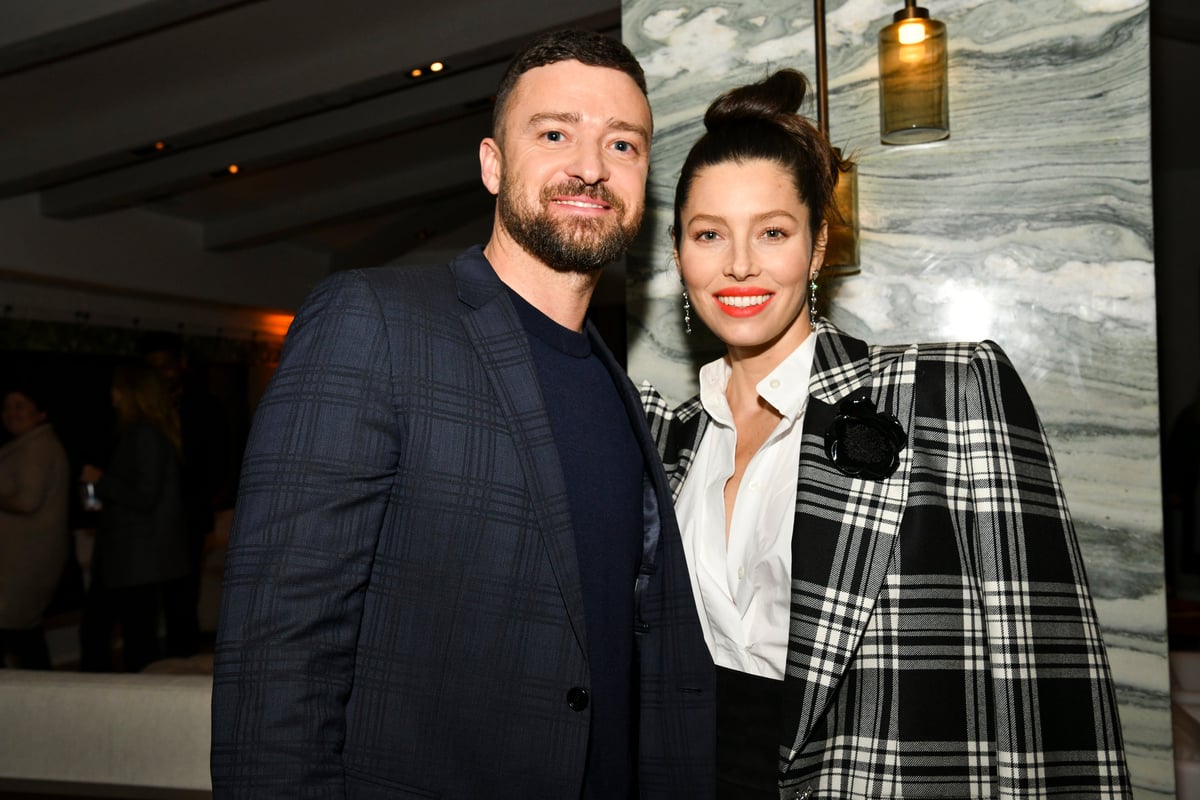 As we entered the 2010s, Timberlake was involved in a series of gaffes, which included imitating Rihanna's mother's Bajan accent while accepting an award in 2013 and dedicating his 2017 #TimesUp/#WhyWeWearBlack IG post to his "hot wife".

Each time, the internet stirred - just a little.

Then in 2019, Timberlake was photographed holding hands with his Palmer co-star Alisha Wainwright while his wife Jessica Biel was pregnant with their second child.

After a few days of speculation, Timberlake apologised to Biel (but not Wright) in an Instagram post, blaming his "lapse in judgement" on drinking "way too much".

Then in 2021, as the world watched in horror at how Spears was treated, Timberlake's name trended on Twitter for days at a time.

With the reframing of Spears' story, a much more critical lens was focused on Timberlake.

He had released some bangers, but he was also a man who appeared to have spring-boarded a solo career out of sl*t-shaming an ex-girlfriend, and who had not once shown empathy for the woman who faced all the consequences of a 'wardrobe malfunction' he caused.

Timberlake had been given opportunities and second chances where others have not been so lucky.

The privilege of Justin Timberlake was right there for all to see, and we were finally looking at it properly.

In February, Timberlake finally addressed both women in a public apology.

"I am deeply sorry for the times in my life where my actions contributed to the problem, where I spoke out of turn, or did not speak up for what was right. I understand that I fell short in these moments and in many others and benefited from a system that condones misogyny and racism," he wrote.

"I specifically want to apologise to Britney Spears and Janet Jackson both individually, because I care for and respect these women and I know I failed."

He said he was ignorant of his privilege in Hollywood and no longer wanted to benefit from others being pulled down.

"The industry is flawed. It sets men, especially white men, up for success. It's designed this way. As a man in a privileged position I have to be vocal about this," he wrote.

Then during a May 2021 battle on DJ battle web series Versuz, between rapper and producer Swizz Beatz and frequent Timberlake collaborator Timbaland, Swizz claimed Timberlake had profited off of Black culture throughout his music career.

Hip-hop and R&B heavily influenced Timberlake's music, especially on his first couple of records, and it's a sentiment many Black creators have shared before.

For those looking for receipts. pic.twitter.com/EBLw92l6P4

"Until you can get Justin Timberlake on Verzuz, I don't really wanna hear those vocals," Swizz pushed when Timberland played some of his collaborations with the singer.

He later clarified that he had no problem with Timberlake, but the conversation had already progressed elsewhere, with many fans upset Timberlake had been invited to the show before a number of Black creators - including Janet Jackson.

Once again, the world was looking at Timberlake through a different lens.

Timberlake obviously feels no ill-feelings towards Swizz or Timbaland. He shared a congratulatory message to mark the one-year anniversary of Versuz after this all took place, but Swizz' comments have contributed to the context in which we now look at Timberlake's career.

For 20 years, he emerged from scandals with barely a mark. In 2021, it's finally caught up with him.

K
kclw a year ago

Reply
Upvote
1 upvotes
Yes some of Justin’s past is questionable. But who is Swizz Beats to call him out?? Swizz collaborated recently with Chris Brown
G
gu3st a year ago

Reply
Upvote
2 upvotes
Something that is being forgotten or de-emphasisied in this narrative, is that Britney, or her team, made a massive deal about her being a virgin, saving herself for marriage.
This publically declared christian virtue sold Britney's brand very well in the US bible belt, but placed Britney's sexual experience squarely in the public discourse. In some quarters, this represented sanctimony that was ripe to be assailed, or was regarded as unlikely to be true. Or, impossible to maintain. Hence, the media's prurience.
While it was arguably a 'clever' marketing ploy, it unfortunately came at a heavy toll for Britney herself.
M
mamamia-user-482898552 a year ago

Reply
Upvote
3 upvotes
@gu3st I was thinking the same thing. Jessica Simpson was another contemporary who traded on the "pure-until-marriage" ticket. I remember even mainstream, supposedly "feminist" personalities like Oprah would discuss the issue of Britney's virginity in interviews with impunity. It was a topic for open slather because her publicists made it so.
A
ak87 a year ago

Reply
Upvote
3 upvotes
@gu3st given she was only like 15 when she signed her first record deal, it will have most certainly been her team and her publicists. At the time she was the “sweet young, church going virgin”, it only set her up for ‘failure’ in that sense with so much pressure put on her by the world 😞 she even got caught in the backlash of Jamie-Lynn’s pregnancy because she was ‘Britney’s little sister’ like Britney had anything whatsoever to do with it?!
G
gu3st a year ago

Reply
Upvote
@ak87 Yep, it was definitely riding for a fall and I agree, almost certainly not something that Britney herself concocted.
C
cat a year ago

Reply
Upvote
4 upvotes
@gu3st It's still wrong that her virginity was something anyone wanted to discuss, and I think we can agree that Britney herself was not the mastermind behind the marketing. Publicists, record label execs, talk show hosts, every single one of them  played a part.
That doesn't take away from the fact that JT took it on himself to disclose information about their sexual relationship in public, which isn't acceptable in any situation.
News
General
Opinion
True Crime
Politics
Sport
Explainer
Entertainment
Celebrity
Reality TV
Movies
TV
Books
Rogue
Royal
Lifestyle
Beauty
Fashion
Weddings
Home
Wellness
Health
Fitness
Travel
Food
Family
Before The Bump
Pregnancy
Baby
Kids
Teens
School
Parent Opinion
Work & Money
Money
Finance
Career
Lady Startup
Relationships
Sex
Dating
Separation
Friendship
Family
Real Life
Couples