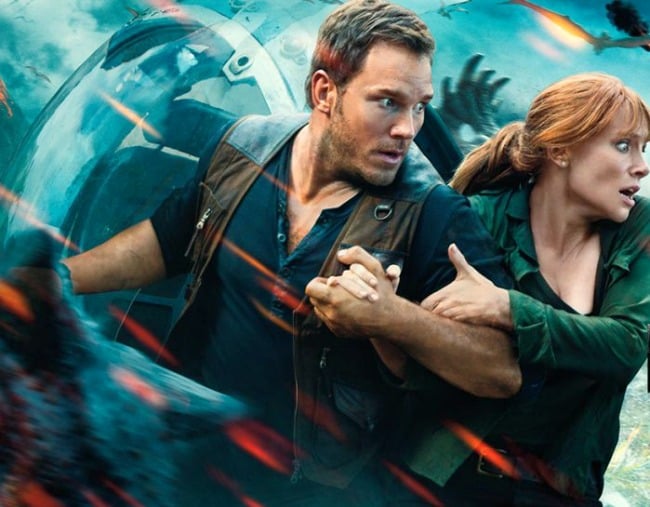 Being scarred for life thanks to the magic of the movies is one of the best parts of childhood.

Remember what it was like watching those grotesque Gremlins terrorize a town, seeing Freddy Kruger slash kids to death in their dreams or wanting to gauge your own eyes out after watching the Grand High Witch take off her mask?

If you are now the proud owner of a gaggle of tiny humans and want to scare the living daylights out of them, just like our parents did to us, boy do I have the movie for you.

Jurassic World: Fallen Kingdom is opening in cinemas Australia wide next Thursday, 21 June but before you jump online to purchase a family pass to beat the lines, there are a few things I need you to know.

First up, Fallen Kingdom is rated M, meaning it’s recommended for audiences 15 years and over (although kids of any age can see it if accompanied by a guardian), so it’s not as if it’s positioning itself as a kid’s movie, at least not on paper.

But with school holidays fast approaching and the lure of adventure and dinosaurs too strong to withstand, it’s the kind of movie a whole lot of children could end up seeing, especially considering the fact that this franchise also holds a special place in the hearts of their parents who were around to witness the original Jurassic Park magic.

So, by all means, takes your kids to see Jurassic World: Fallen Kingdom…just be aware that it might damage their little souls or see them asking to sleep in your bed for the foreseeable future, because this version of Jurassic World veers a little towards the dark side.

The movie takes place three years after the events of the first film and the destruction of the Jurassic World theme park.

Owen Grady (Chris Pratt) and Claire Dearing (Bryce Dallas Howard),  return to the island of Isla Nublar because a now active volcano is threatening to erupt and kill the last of the remaining dinosaurs. So they attempt to stage a rescue mission, but things go pretty awry when they find out that the team they are working with had a different and more sinister plan all along.

It kicks off with a series of perfectly executed action sequences, and manages to move the plot along at a brisk pace and establish high-stakes without getting bogged down in exposition or unnecessary character development. This time around, the dinosaurs are both the heroes and the villains of the piece, and there’s a real sense of fear to them that just wasn’t there in Jurassic World.

Amid the heart-stopping action sequences there is also a very interesting moral dilemma that the characters in the film must grapple with. Which is, do the dinosaurs deserve the same amount of assistance as any other species facing extinction? Or is their potential death just nature’s way of correcting a mistake that humans should never have made?

So, while Fallen Kingdom is a movie that’s well worth seeing , just be aware that there are moments that will scare the beejesus out of little kids.

Or just make them cry, a lot.

Along with the many brutal human deaths at the claws of angry dinosaurs, the first half of the film also contains a particularly devastating dinosaur death.

It's a scene where the audience sees one of the largest dinosaurs, an immense and majestic creature,  very slowly burn to death as it cries out in agony and the humans watch on helplessly.

There are many dinosaur deaths in the film, but the memory of this particular scene is the one that will stay with you.

The second half of the movie then very much switches gears, back on a mainland setting the film suddenly morphs into an old-school monster horror flick and all the creepiness that entails.

The action is now taking place in a large Gothic mansion, where a particularly nasty and vicious new breed of dinosaur is out for the blood of a little girl named Maisie (Isabella Sermon). It chases after her through the darkened corners of the home, bringing to mind those dreams we all had as kids where our parents have suddenly disappeared and we were left alone in the shadows and at the mercy of the monsters.

Eventually, a terrified Maisie hides beneath the covers of her bed, but the creepy dinosaur finds her anyway (they don't confirm this in the movie but I'm pretty sure it can sense fear/read minds).It then proceeds to lurch over her terrified form like the worst kind of thing you ever imagined hiding in your closet or under your bed.

Parents will of course be the best judges of just how much terror, action and dinosaur death their children will be able to handle, but just be aware that as good as Jurassic World: Fallen Kingdom is, and it is hella good, if your kids are young or tend to find violence a little frightening, maybe they should sit this one out.

After-all, it's not like they are going to miss out, with the way things are going in Hollywood at the moment their adulthood will be filled with a slew of Jurassic Park reboots to fear and enjoy.