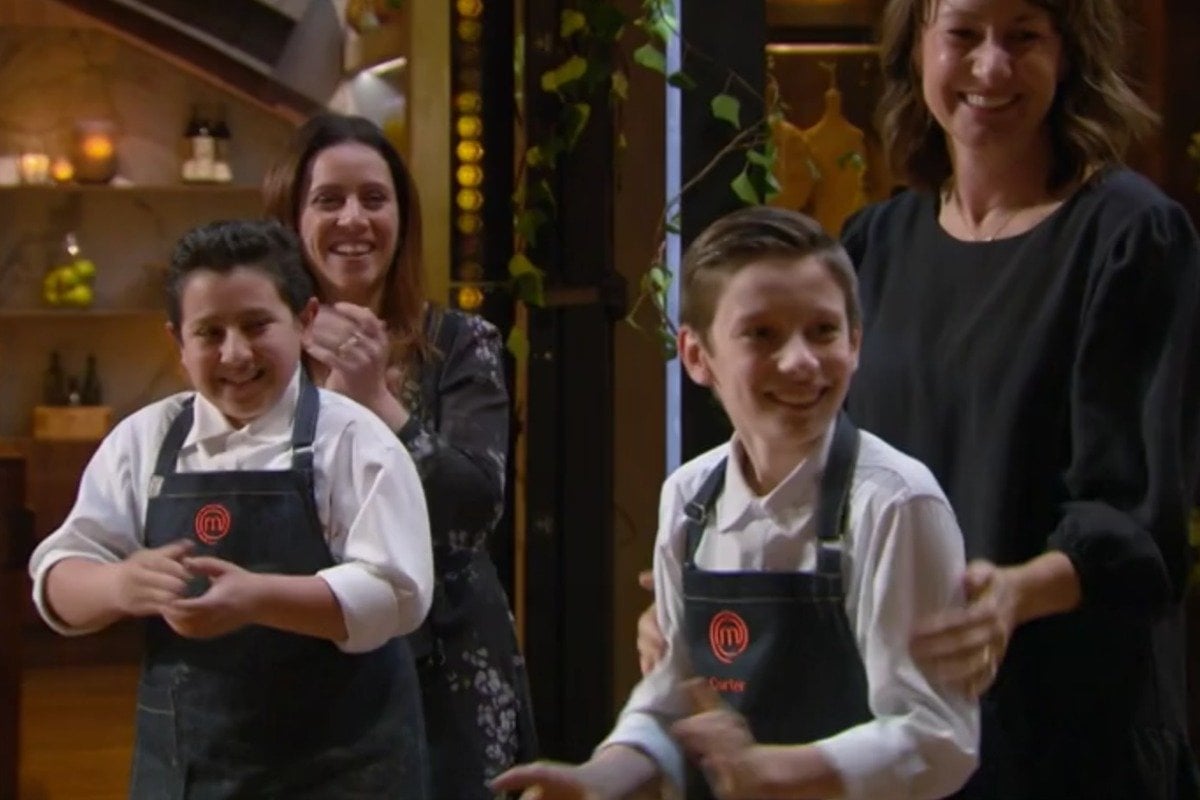 After being whittled down from 14 young chefs, all three of the primary school aged kids left standing in the final round were desperate to win.

As they worked through their nerves and took on their biggest challenge yet - a two-course fine dining meal for four people - they yelled encouragement from their benches to their fellow competitors. Filo, 11, and Carter, 12, both offered their support to Georgia when she realised halfway through making her dessert that one of her elements had collapsed, causing her to burst into tears.

Watch: Georgia ran into trouble in the dessert round.

When it came time for the big announcement at the end of the show, they lent over with whispers of "good job" as the judges praised their dishes. They then stood grinning, waiting patiently, for judge Melissa Leong to tell them who would be taking home the coveted trophy and cash prize of $25,000.

As Georgia's name was announced, the camera quickly panned from the shock on her face to the two boys standing beside her.

Both stood grinning with genuine looks of excitement on their faces, hiding any ounce of disappointment they might have been feeling.

They clapped enthusiastically, yelled out "good job" and "you did so well" and accepted defeat graciously and without reserve.

"Seeing Georgia win, it's amazing. And I am so happy I've made amazing friendships. I am just super happy," said Filo.

As the judges told Georgia to go and lift her trophy in victory, Carter - grinning from ear to ear - yelled out "go on, you can do it!" as Georgia doubted her ability to heave the huge prize above her head.

Amazing effort Filo and Carter, you should be so proud 🧡 #JrMasterChefAU pic.twitter.com/2qoN5tjHU2

It was pure, incredible sportsmanship that showed a maturity well beyond their years. But what made the episode particularly poignant was that so many of us had just spent the weekend watching the President of the United States do the exact opposite.

Since Saturday's confirmation that Joe Biden had clinched victory with 290 electorate votes to 214, Donald Trump has refused to accept defeat, refused to concede the presidency, and has instead spent the last few days spitting out claims of voter fraud without an ounce of proof, and chucking a tantrum you'd expect from, well, a child.

Despite losing by five million votes, President Trump is refusing the title of "loser". A description he has told us time and time again he is not very "good at".

We've instead watched him sulk on the golf course, and fire off accusatory and bitter tweets filled with angry capital letters. Instead of addressing the media himself, he's sent his campaign officials out to front press conferences and spew out his claims that Biden "stole the election".

The 74-year-old has shown us what a sore loser looks like, as he abuses the highest office in one of the most powerful countries in the world, and accuses one of the central pillars of his nation's identity - democracy - of being corrupt. 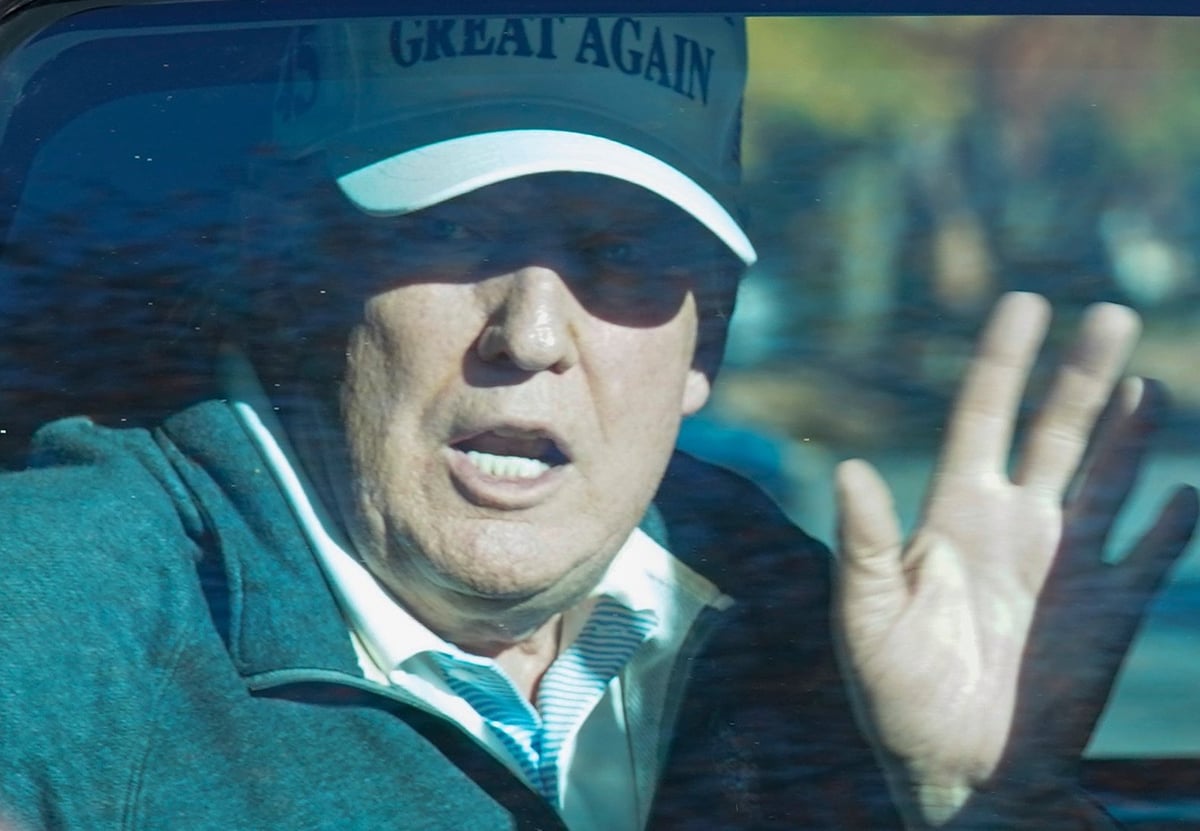 President Trump has refused to accept the outcome of the American election, instead buckling down on tactics of misinformation. Image: AAP.

What Trump seems to be incapable of understanding is that losing graciously is just as much a part of competition as winning. If you plan on being a part of the race, losing is something you must be willing to accept.

Filo and Carter could have very well turned to the judges and demanded more of an explanation as to why they lost last night in the Junior MasterChef finale. Georgia's dessert, after all, wasn't what she planned to plate up. She'd turned a complex toasted coconut ice cream slice into a "tropical mess" hoping that the flavours would save her over what ended up being a much more rustic presentation than she'd hoped.

But she won. Her flavours were there, and the judges ultimately decided that if they had to go back and eat any of the three two-course meals again, it would be hers.

Trump might not agree with Biden. But the American public has decided that it's Biden they want in the White House.

It's as simple as that.

Perhaps Donald Trump should take some lessons in humility and grace from the two young reality TV stars we watched last night, accepting defeat with the poise and skill we'd expect from someone six decades their senior.

Reply
Upvote
Junior MasterChef Australia.2020, was absolutely brilliant. Every contestant was wonderful. I was constantly reminding myself that they were all aged from 10-14, as their knowledge of food + their understanding of how flavours work together was beyond their young ages. The language + food terms was impressive. How they were all able to think so quickly, to adapt to situations, to dream up dishes without googling + to then implement their ideas into actual dishes that were masterpieces was amazing. I tried to not have little favourites but I found myself drawn each night to certain ones, crossing my fingers that they’d not be eliminated. The way each child throughout the competition encouraged one another, with such genuine honesty, with compassion, innocence, respect was beautiful to witness. Listening to their injections of personality spill out was gorgeous. The little jokes, one liners, puns, their ability to enjoy themselves + not take themselves too seriously whilst still wanting to do their very best with every dish, was a true sign of maturity. Listening to them feel disheartened at times whilst they weren’t achieving their dream dish yet within seconds they’d manage to ground themselves + persevere. Wow. On GrandFinal night, watching sweet little Georgia feel crushed at her dessert not taking on the vision in her mind was heartbreaking, yet she managed to rally herself to remember that life doesn’t always go to plans...hang on a second, the words of an 11 year old...in the throes of disappointment was beautiful. Filo & Carter were truly remarkable too
R
retired nanny 2 years ago

Reply
Upvote
2 upvotes
I was in absolute awe of those junior masterchefs, what a wonderful, supportive bunch of young people they are. We have not seen the last of those kids. On the other hand I wish we'd  seen the last if the sook in the US...he's just so busy throwing his toys out of his cot that he's unaware what a laughing stock he and the USA have become in the world stage. More than usual..I also reckon Melania will cut and run at the first opportunity, and may be you'll see young Barron actually  smile.
News
General
Opinion
True Crime
Politics
Sport
Explainer
Entertainment
Celebrity
Reality TV
Movies
TV
Books
Rogue
Royal
Lifestyle
Beauty
Fashion
Weddings
Home
Wellness
Health
Fitness
Travel
Food
Parents
Before The Bump
Pregnancy
Baby
Kids
Teens
School
Parent Opinion
Work & Money
Money
Finance
Career
Lady Startup
Relationships
Sex
Dating
Separation
Friendship
Family
Real Life
Couples