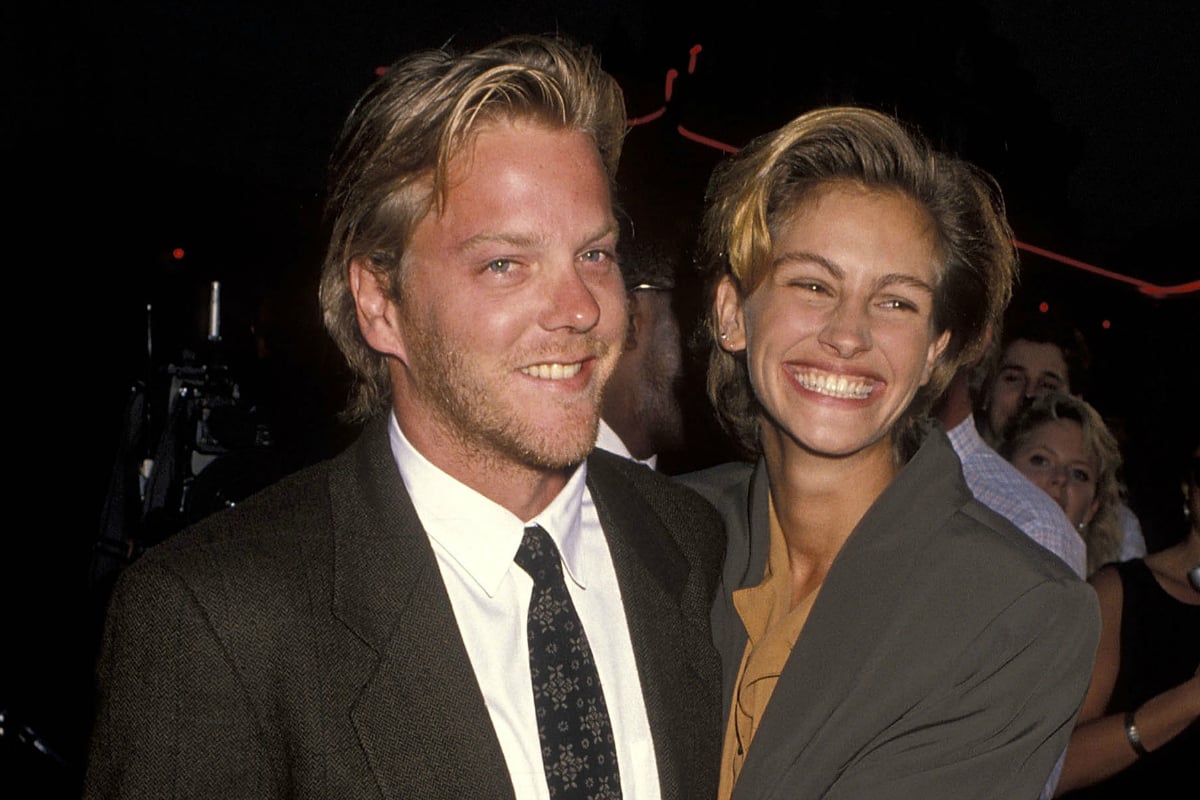 We all know how romantic comedies go.

Loveable, complicated woman trips through life and a string of not-right romances until she finds her person, the person who shifts her world on its axis. Cue climactic wedding and maybe a quick glimpse into the future of little children running around while a heart-warming ballad swells.

For Julia Roberts, one of the genre's most legendary stars, it's not all that far from reality. (Well, minus the swelling ballad...)

This is how the Oscar-winning actor ended up with her happy ending.

Early in her career, Julia Roberts did what girlfriends have been warning against since women entered the workforce: she fell for a colleague.

At the age of 19, the Georgia-born actor reportedly dated Liam Neeson, 35, whom she met on the set of the 1988 film Satisfaction. The following year, she began a relationship with her Steel Magnolias co-star, Dylan McDermott, which included a brief engagement.

And then, in 1990, along came Kiefer Sutherland.

The pair got together after starring in the aptly titled box-office flop, Flatliners, and soon became engaged. 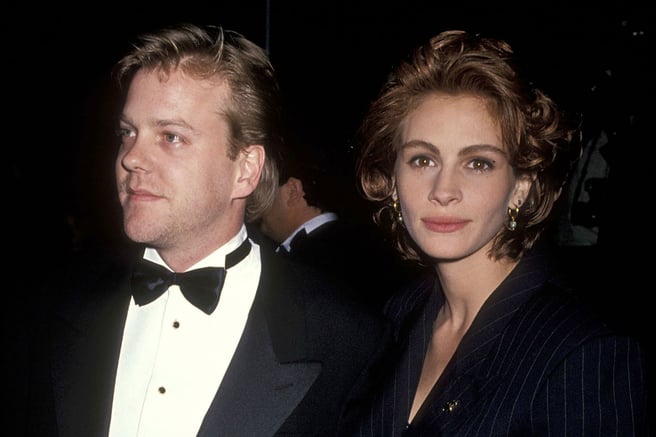 Theirs was billed as one of the weddings of the decade. Some 150 guests had been invited to witness Hollywood's most bankable star wed her leading man at 20th Century Fox's Soundstage 14, which had been transformed into a garden-like paradise for the event, People reported.

But just weeks out from the June 1991 nuptials, Roberts called the whole thing off.

"We were both young, and we were both very much in love, we had decided that we wanted to get married, but then this other thing kind of took over," Sutherland told The Jess Cagle Interview in 2016.

"She was arguably the most famous woman in the world, and this wedding that was supposed to be something between the two of us became something so big."

He described her decision as a brave one.

"It wasn’t what she wanted to do in the end," he said. "And I think it took a lot of courage, in amongst all of that other stuff, to be able to say, 'I can’t do this.'"

A two-year marriage, and Benjamin Bratt.

Roberts attracted criticism from tabloids for quickly moving on from her engagement with Sutherland's friend, actor Jason Patric (if anyone knows the acceptable timeline for these things, please share).

Speaking to Vulture in 2011, Patric firmly denied speculation that he and Roberts took off to Ireland together on her would-be wedding day to begin their relationship.

"All that stuff is made up," he said. "They had a relationship that ended, and I was with her for a little while and it ended... I think they’re fine. But we never had any issue, even back then."

Roberts did end up walking down the aisle in June 1993 toward country musician, Lyle Lovett. 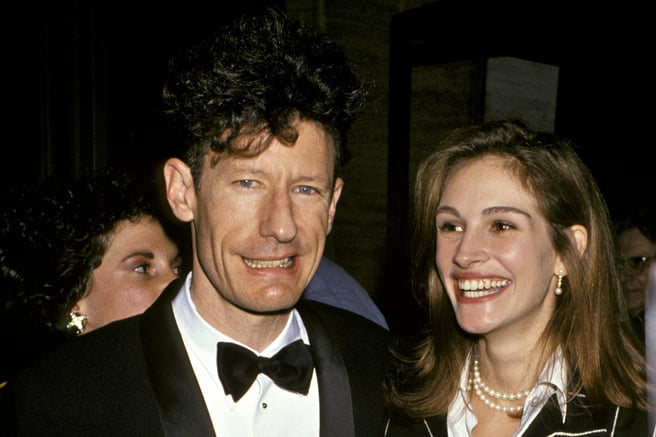 The couple met through mutual friends: "I had a very strong reaction to meeting him," Roberts told Barbara Walters in 1993. "Different to the way I've ever reacted to any person on the planet... He's perfect."

According to press, their wedding was a far more low-key event, staged at an Indiana Lutheran church with just 72-hours planning.

Speaking about the how quickly their relationship unfolded, Roberts said they intended to get married later in the year, but she expedited the process.

"I could picture the months going by and I could sort of picture the wolves [tabloid press, she explained] coming in closer, and I got panicked," she told Walters. "It just seemed like the smartest way to do it so that it could be ours, as opposed to everybody's."

The couple ultimately separated in March 1995 and subsequently divorced.

A relationship with actor, Matthew Perry, followed from 1995-6 and included her iconic cameo as "Susie underpants" on Friends.

But a more enduring one arrived in 1998 in the form of Law and Order star, Benjamin Bratt — he, of the ridiculously chiselled jawline. 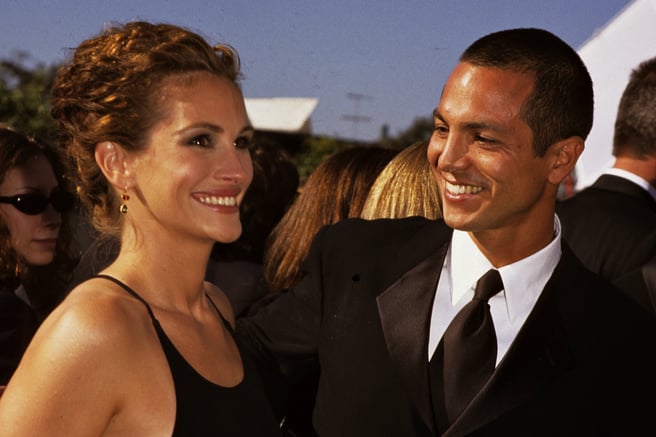 "We met in a restaurant," Roberts told Vanity Fair the following year. "He walked in, and I looked up at him, and it was like something hit me over the head with a bat."

Yet in June 2001, Bratt's publicist confirmed they were no longer together. By then, rumours of a split had been circulating for close to a year, which was around the time Roberts met the man who would become the father of her children, Danny Moder.

"I love Benjamin. He’s a good man, he’s a fine man. He is, to the exultation of the female single population, not my man anymore," Roberts said in July 2001. "Sad, but true, and not ugly, not because of anyone else."

Happily ever after, with Danny Moder. 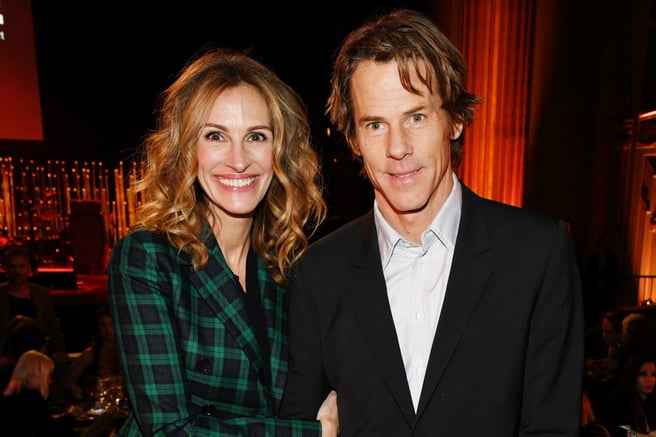 Cinematographer Danny Moder was married when he met Julia Roberts on the set of the 2000 film, The Mexican.

But once his divorce was finalised the pair wed on July 4, 2002.

The couple has three children; twins, Phinnaeus and Hazel, born in November 2004, and son, Henry, born in 2007.

Speaking about their connection on Gwyneth Paltrow's Goop podcast in 2018, Roberts described meeting and marrying Moder as a "real seismic shift".

"That was the first [feeling] like 'my life will never be the same' in the most incredible, indescribable way," she said.