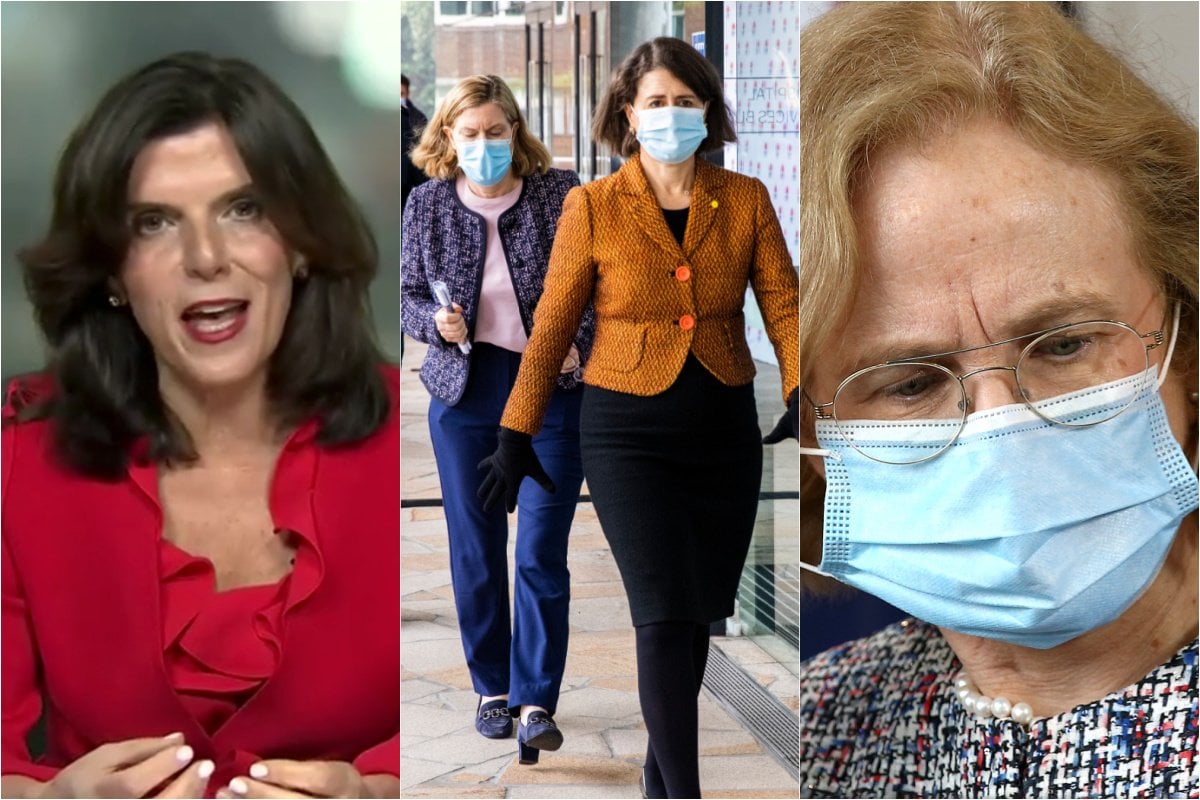 A former Liberal MP says she would have exited parliament quietly if not for Scott Morrison's attempts to "silence" her.

Julia Banks quit the Liberal Party after the leadership coup against Malcolm Turnbull in late 2018, sitting as an independent until an election the following year.

Ms Banks has blamed the prime minister's behaviour - describing it as "menacing" and "controlling" - for her decision to quit the party and leave politics.

The former corporate lawyer said Mr Morrison tried to portray her as a "weak petal" who had not coped with the mental strain of the leadership spill.

When the prime minister gave a press conference and took questions about Ms Banks' decision not to recontest the next election, he responded by expressing concern for her welfare.

"At that time, I thought, I'm challenging him and that was his response. His response was to drag me through this sort of sexist spectrum.

"A narrative that I was this weak, over-emotional woman, to the bully bitch. That narrative was played all the way through that three months."

Ms Banks says she was also told the prime minister's office was "backgrounding" against her, giving off-the-record briefings to journalists.

A spokesman for the prime minister said Mr Morrison was disappointed Ms Banks quit the party and had several conversations with her to understand what she was going through and what support was available.

"That included support for personal leave so she could take the time to recover from the upset many people suffered during that period," the spokesman told AAP.

"The prime minister absolutely rejects claims about the nature of those conversations."

Banks has also accused a Turnbull government Cabinet minister of sliding a hand up her leg while she was sitting on a couch talking to another MP.

"What disturbed me the most about that – and I'm sure, I know, worse things have happened to other women in the workplace, certainly they have to me – but what disturbed me about that was here I was, a 50-something corporate lawyer, member of parliament, and that move was made on me which would classify as an unwelcome sexual advance or inappropriate touching.

"And I thought if that's happened to me, where there's pretty minimal power disparity, you can only imagine what happens to people who don't have that sort of power parity," she told 7:30.

Sydneysiders have been warned they are at a critical point of lockdown, with authorities refusing to rule out an extension of stay-at-home orders amid a spread of infections among aged care residents.

NSW recorded 35 new local COVID-19 cases in the 24 hours to 8pm on Sunday, two of which were aged care residents at a Sydney nursing home where three residents have already tested positive.

SummitCare chief operating officer Michelle Sloane said she had urged staff members to get their COVID-19 jab. However, with so few Australians fully vaccinated against the virus, all frontline services were grappling with the same issues accessing a jab.

"If we said to all of our unvaccinated staff 'don't come to work', there'd be no one to care," Ms Sloane told reporters on Monday.

NSW Chief Health Officer Dr Kerry Grant would not comment on the likelihood of extending the 14-day lockdown beyond its July 9 deadline until she had "looked at all the data".

"Every day brings a new set of data and a new set of challenges and what we think in the morning can change in the afternoon," Dr Chant said.

Premier Gladys Berejiklian said this second week of lockdown was "critical" for getting on top of the outbreak, which has reached 312 people since emerging in Bondi in mid-June.

Furious St George Illawarra boss Ryan Webb has slammed the arrogance of the Dragons players who broke the COVID rules over the weekend to have a party, refusing to rule out further sanctions beyond the 20 games in bans and big fines from the NRL.

The NRL came down hard on the illegal gathering at Paul Vaughan's barbeque on Saturday, fining them a combined $305,000.

Host Vaughan's regular NRL season is also over after he was handed an eight-game ban to go with a $50,000 fine.

All other players involved have been issued with one-game suspensions and varying fines, with the bans to be served over the next month.

The punishment also took into account players' histories and claims information was withheld from the NRL after it emerged only on Monday that Jack de Belin also attended the party.

But that could only be the start of it, with a Dragons board meeting on Tuesday to determine potential further punishments.

Queensland health officials expect more locally acquired cases of COVID-19 in coming days, but remain confident the outbreaks are under control as the number of exposure sites in the southeast grows.

Premier Annastacia Palaszczuk remained optimistic on Monday, highlighting the extensive work of contact tracing and the links to existing clusters.

She also took solace in less dangerous Alpha variant spreading in the community, as opposed to the highly contagious Delta strain.

But while Chief Health Officer Dr Jeanette Young shared the premier's optimism, she said Queensland wasn't out of the woods yet.

"This cluster of the Alpha variant is all coming together and we're finding out where all the issues are," Dr Young said.

"We need a bit longer to work through this, to manage all of the cases and I expect we will see a few more still come through."

In the midst of Queensland's latest outbreak, the government has ramped up its push for dedicated quarantine facilities in Brisbane and Toowoomba.

Ms Palaszczuk affirmed the government's commitment to transitioning from hotels to purpose built quarantine facilities and stated Queensland was positioned for two, subject to Commonwealth approval.

WA on track to ease all virus restrictions.

Western Australia is edging closer towards a return to pre-lockdown life despite concerns over the arrival of another coronavirus-infected ship.

Face masks are no longer required outdoors where physical distancing is possible and hospitality venues have returned to a two-square metre capacity and a limit of 150 patrons after restrictions were further eased for Perth and the Peel region overnight.

Major venues including Optus Stadium and RAC Arena can operate at 50 per cent capacity.

The restrictions are due to expire next Monday, when Perth and Peel are slated to return to pre-lockdown life with no limits on gatherings.

A cluster of locally acquired cases in Perth's northern suburbs appears to have been contained but the arrival of a bulk vessel carrying an infected crew member off the state's mid-west coast has caused fresh headaches for authorities.

A bulk vessel crew member has been hospitalised in Perth after testing positive to coronavirus as Western Australia prepares to further ease restrictions. https://t.co/j8FqUS6O3H

The MV Emerald Indah was forced to dock in Geraldton, 420km north of Perth, after the man became ill and "deteriorated quickly", with bad weather preventing a helicopter evacuation.

He was taken to Geraldton Hospital and tested positive to coronavirus on Monday before being airlifted to a hospital in Perth.

None of the other 21 crew members are reported as being unwell.

More than 40 per cent of Northern Territorians have rolled up their sleeves for a COVID-19 jab.

That's about 100,000 people out of the Territory's 246,561 residents and a major milestone, Health Minister Natasha Fyles says.

About 16 per cent or 30,000 Territorians have also received their second dose and are fully vaccinated.

Hundreds of people in Maningrida, an Aboriginal community in the heart of the Arnhem Land about 500km east of Darwin, queued up to get the jab in recent days, she said..

Meanwhile, a mine worker, who tested positive for COVID-19 and allegedly lied to health workers about his movements in the Darwin community while he was supposed to be isolating, has been fined $5056.

There are 17 cases linked to the outbreak.

A man has been arrested following the death of a woman in Melbourne's east.

Victoria Police found the 77-year-old's body at her Blackburn home during a welfare check on Monday night.

The exact cause of death is yet to be determined but it is being treated as suspicious.

A man has been arrested as police probe how a woman died after her body was found inside a home on a busy road in Melbourne. https://t.co/6rMI1bmsmZ

A 49-year-old Blackburn man was arrested at the scene and remains in police custody.

It is believed both parties were known to each other and investigators are not looking for anyone else in relation to the incident.

According to Destroy the Joint, this is the 22nd woman killed by violence against women in 2021.

Israel has registered a decline in the effectiveness of the Pfizer-BioNTech coronavirus vaccine as the Delta variant spreads across the country, the health ministry says.

Since June 6, the vaccine's effectiveness in preventing infection has dropped to 64 per cent, the ministry said.

In February, Israeli data had put the number at 95.8 per cent.

The vaccine still averted 93 per cent of severe illnesses and hospitalisations, compared to about 99 per cent in February.

The number of registered infections has been rising significantly for about two weeks in Israel, fuelled by the more virulent Delta strain first detected in India.

On Sunday, 334 people tested positive, according to the health ministry. The last time more than 300 new cases were recorded in one day was in early April. Many of those infected were younger people.

The number of people severely ill with COVID-19 increased slightly to 35. No deaths related to the virus have been recorded for about two weeks.

- UK Prime Minister Boris Johnson has set out plans to end social and economic COVID-19 restrictions in England in two weeks' time, a test of whether a rapid vaccine rollout offers enough protection from the highly contagious Delta variant.

- Kate Middleton has been forced to self-isolate at home after coming into contact with a positive COVID case.

- About 150 kids are missing after armed men attacked a school in northwest Nigeria. The students were in the process of sitting for exams when the kidnappers overpowered the school's security guards.

Reply
Upvote
1 upvotes
Regarding Julia Banks's comments on the threatening behaviour of our PM. well it's a case of "she said, he said".....I know who I believe and it's not the words of a man who fled the country while it was burning...some of us don't forget and nor do we have respect for a "leader" who is happy to tell us to call him Scomo...how dignified is that?
News
General
Opinion
True Crime
Politics
Sport
Explainer
Entertainment
Celebrity
Reality TV
Movies
TV
Books
Rogue
Royal
Lifestyle
Beauty
Fashion
Weddings
Home
Wellness
Health
Fitness
Travel
Food
Parents
Before The Bump
Pregnancy
Baby
Kids
Teens
School
Parent Opinion
Work & Money
Money
Finance
Career
Lady Startup
Relationships
Sex
Dating
Separation
Friendship
Family
Real Life
Couples