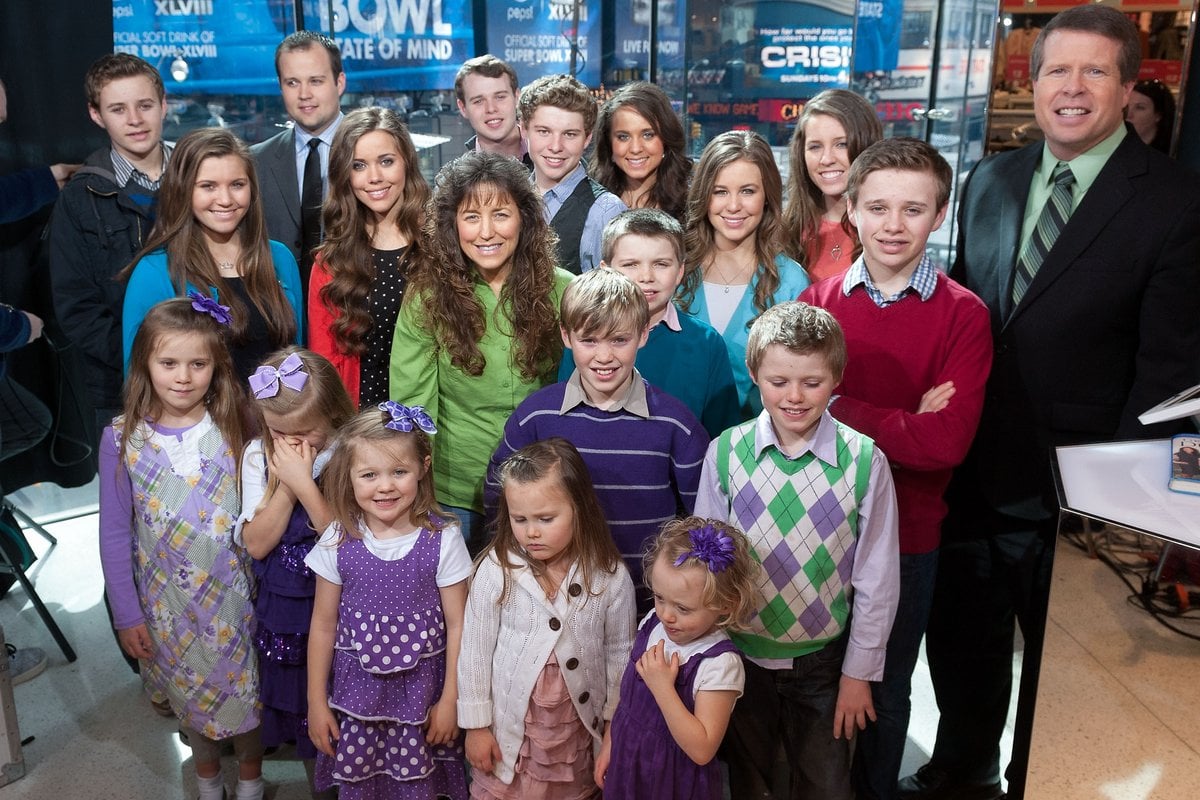 In 2006, the world was introduced to a family of devout Christians living in Tontitown, Arkansas.

Back then, Jim Bob and Michelle and the 16-child Duggar family was enough to turn a one-hour TV special into a reality series about the family, then titled 16 Kids and Counting.

We were fascinated as these Baptists managed to handle raising and caring for more than a dozen children before adding to their brood, resulting in the show being renamed three times.

It’s been almost six years since TLC officially cancelled the once popular 19 Kids and Counting and while the family returned to screens shortly after with Counting On, there are so many kids to keep track of we thought it was worth taking a look through Instagram and seeing where the Duggars have each ended up.

My love and I! We really enjoyed this trip down to Texas!

The couple that started it all have stopped having natural-born children, but that doesn’t mean their brood has stopped growing.

In addition to the 20 (and counting) grandchildren they now have, the couple became permanent guardians to their grandnephew, 13-year-old Tyler, after his mother was unable to care for him.

Jim Bob and Michelle are still caring for seven other kids at home ranging from 11 to 19 and regularly posting photos and Bible verses on their Duggar Family Facebook page and updating the family website.

The eldest Duggar boy's reputation has taken a hit in recent years. In 2015 allegations surfaced that he molested at least five girls as a 14- and 15-year-old – including his own sisters.

Speaking to his parents, Josh had reportedly confessed to inappropriately touching his sisters and friends while they were sleeping.

Later in 2015, Josh, who had been married to his wife Anna since 2008, was exposed in the Ashley Madison hacking scandal as having cheated on his wife.

On April 23, 2021, Anna announced that the couple were expecting their seventh child, a daughter.

According to a news release from federal prosecutors, obtained by People, Josh "allegedly used the internet to download child sexual abuse material. [He] allegedly possessed this material, some of which depicts the sexual abuse of children under the age of 12, in May 2019."

His parents, Jim Bob and Michelle, made a statement soon after Josh's arrest.

"We appreciate your continued prayers for our family at this time. The accusations brought against Joshua today are very serious," their joint statement read.

"It is our prayer that the truth, no matter what it is, will come to light, and that this will all be resolved in a timely manner. We love Josh and Anna and continue to pray for their family."

On December 9, 2021, Duggar was found guilty and is now facing a potential 20 years in prison, just three weeks after the birth of his sixth child.

The 33-year-old's sentencing is set to take place early next year.

Jana was dubbed Cinderella Duggar for her house-cleaning and child-caring role in the family, as she was the eldest and unwed at 29.

In 2018, it was rumoured photographer Caleb Williams was courting Jana, but there was no "courtship announcement". Despite this, he did share a photo on social media in October 2017 holding Josh and Anna’s son Mason – so he has certainly met the family. However, in 2019, sister Jessa confirmed she wasn’t in a relationship, responding to a comment which surmised Jana’s foray into social media hinted at a possible courtship announcement.

"That’s been merely coincidence for some," wrote Jessa. "Definitely not a prerequisite. She’s not in a relationship."

"But if anyone is interested, please send all applications to me," she continued.

"I will check them out thoroughly."

As for her career, Jana Marie remodels houses.

"We are so excited to announce the courtship of John David and Abbie!" Michelle and Jim Bob wrote in a statement via the family’s website.

"We fell in love very quickly," John David told TLC. "It’s been a wonderful journey thus far, and [we’re] taking the next step to move on to a courtship."

A few months later, the couple announced their marriage on November 3, 2018.

"We are so excited to be married! It was a beautiful moment and we so appreciate our friends and family for sharing this day with us. Most of all we are thankful to Christ for bringing us together. This is going to be an amazing journey!" they wrote on the Duggar family website.

Six months after the couple married, they announced they were expecting their first child together.

Fans of the show might remember that Jill met her now-husband Derick Dillard shortly before he went to Nepal to serve as a missionary.

After speaking over Skype, visiting him – with her father – and starting a formal "courtship" when he returned in November 2013, the pair announced their engagement in April 2014 and were married in June.

Jill, now 30, has since given birth to the couple’s two sons, Israel, six, and three-year-old Samuel.

After meeting her now-husband, Ben Seewald, through church, 29-year-old Jessa married in November 2014. A year later, they welcomed son Spurgeon, now six, followed by five-year-old Henry in February 2017, and two-year-old Ivy in May 2019.

On February 18, 2021, the couple announced they were expecting their fourth child, after experiencing a miscarriage in 2020.

Jinger married former professional soccer player Jeremy Vuolo in November 2016. They began courting when she was 22 and he was 28.

On May 28, 2020, the couple announced they were expecting their second daughter after a miscarriage in 2019.

On November 22, 2020, Jinger gave birth to their second daughter, Evangeline.

Joe and Kendra had such a beautiful wedding day with each detail being looked after. We are so happy to share more photos of the incredible day! •link in the bio•

In February 2021, the couple welcomed their third child, Brooklyn.

A post shared by Joseph and Kendra Duggar (@littleduggarfamily)

With one "failed courtship" on his record, Josiah pleased his parents when the 25-year-old entered an official courtship with Lauren Swanson, 22.

"It was really exciting to hear Lauren say, 'Yes, I will start a courtship with you.' It was really good to hear that, and she was genuinely surprised," Josiah told TLC.

Curiously, Joy-Anna has been the biggest detractor of her parents' faith, with a leaked video from her wedding rehearsal dinner revealing she 'struggled' with accepting her family’s rigid belief system.

"I can’t speak and cry. It’s terrible," she said in a clip obtained by Us Weekly. "First of all, I want to say that Joe, I’m so thankful for you. You really did change my life. Just through my teen years, I think I was having a hard time taking my parents' faith as my own and you really befriended me as an older brother."

The rest of the Duggar children

In 2020, Jedidiah ran for State Representative in his hometown of Springdale, Arkansas. And on April 3, 2021, he tied the knot to Katey Nakatsu, who is also 22.

Jeremiah lives five minutes away from his brother and works as a pilot.

And on February 26, 2021, Justin wed his fiancee of three months Claire Spivey.