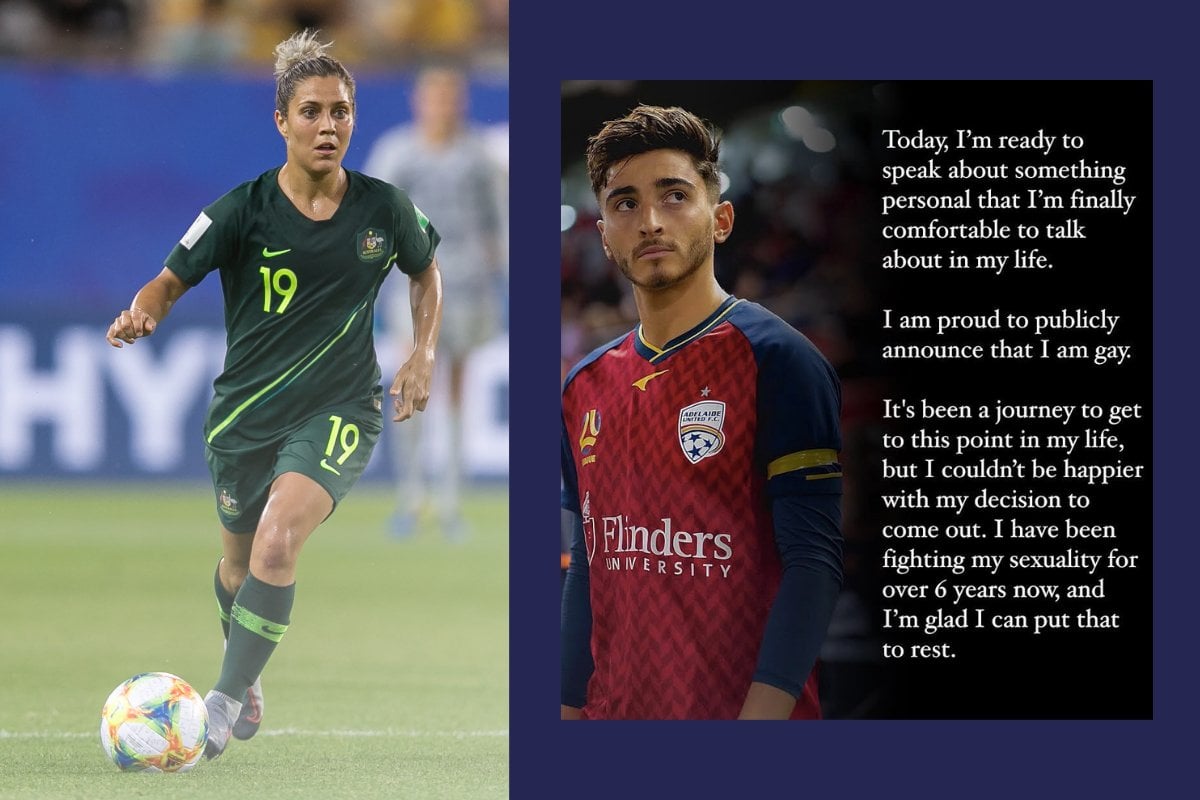 Just by being himself, professional footballer Josh Cavallo has made history.

In October, the Adelaide United player posted a statement to social media about his sexuality.

"I am proud to publicly announce that I am gay," Josh shared in an Instagram post, making him the only current top-flight male professional footballer in the world to come out.

"It's been a journey to get to this point in my life, but I couldn't be happier with my decision to come out," Josh continued. "I have been fighting my sexuality for six years now, and I'm glad I can put that to rest."

Josh shared further comments about the difficulty he has faced navigating his sexuality in the sporting arena as well as the public eye.

"Being a gay closeted footballer, I've had to learn to mask my feelings in order to fit the mould of a professional footballer," he wrote.

"Growing up being gay and playing football were just two worlds that hadn't crossed paths before. I've lived my life assuming that this was a topic never to be spoken about."

In an emotional video following his statement, Josh said he grew up feeling ashamed he'd never be able to do what he loves and be himself.

"All I want to do is play football and be treated equally," he said.

Following his announcement, the 21-year-old football player received an outpouring of support from both the international football community and the LGBTQI+ community.

You no longer have to hide who you are @joshuacavallo. You are not alone, as the football community around the world today has shown.

We are very proud of you. Your words will be an inspiration & support to so many.pic.twitter.com/VifFoLIZS8

.@JoshuaCavallo is the first top-flight professional footballer to come out as gay. I’m sending him a whole lot of love today. https://t.co/Yh6dRUJHXB

In a conversation with Mamamia, Matildas and Brisbane Roar player Katrina Gorry shared her thoughts on what is a significant moment for the sport.

"It's amazing and incredibly strong of him," the pro footballer said.

"It will definitely help other people feel comfortable in potentially coming out because it's a really hard space, especially for male players."

"We can get caught up when it happens but forget to support them along the way," she said. "There are still struggles, and I'm sure he'll face some hard times through it all... we've got to keep supporting him and make sure other players feel comfortable in doing exactly what he just did."

Having played in a professional football team since 2012, Katrina has found the culture in her teams to be more accepting and inclusive. Many players in the female league are openly gay or bisexual, and there doesn't appear to be the same stigma around coming out.

"We have that quite emotional side of us and we can understand when people are going through tough times or aren't able to feel like they can be themselves. I feel like we've always had that - definitely in sport I've felt that," Katrina explained.

"Sport was always my safe space to be who I want to be. I do think it is a little different in a male environment... They're meant to be 'strong men' and it can be taken the wrong way sometimes, I think."

"I definitely think the culture needs to change [so that] people can be themselves and they don't have to put on a brave face."

"At school, nobody had really come out, and no one understood what that meant... and in a schooling environment, people aren't that nice and they'll pick on anything," she said.

"We definitely got bullied, and as footballers, we're a bit more strong and not [always] the 'girly girl' type - I definitely wasn't - so, I'd get called a boy and things like that.

"As a 14, 15-year-old kid you don't really realise why it's happening until you look back now, and I'm really proud of who I am and who I love," she said.

Katrina and her teammates find the culture of female football to be "pretty accepting of everyone and everything."

"We knew people had had struggles in the past, whether that was coming out or being gay or through other issues in their life - we always helped each other through it," she said.

"It's definitely something we're really proud of as footballers."

She hopes that Josh coming out will create a positive change in the male side of the sport and steer them in the same direction.

"It's a massive conversation that needs to be had, especially across the male game. It's scary to think so many people are living in a shadow at the moment," she said.