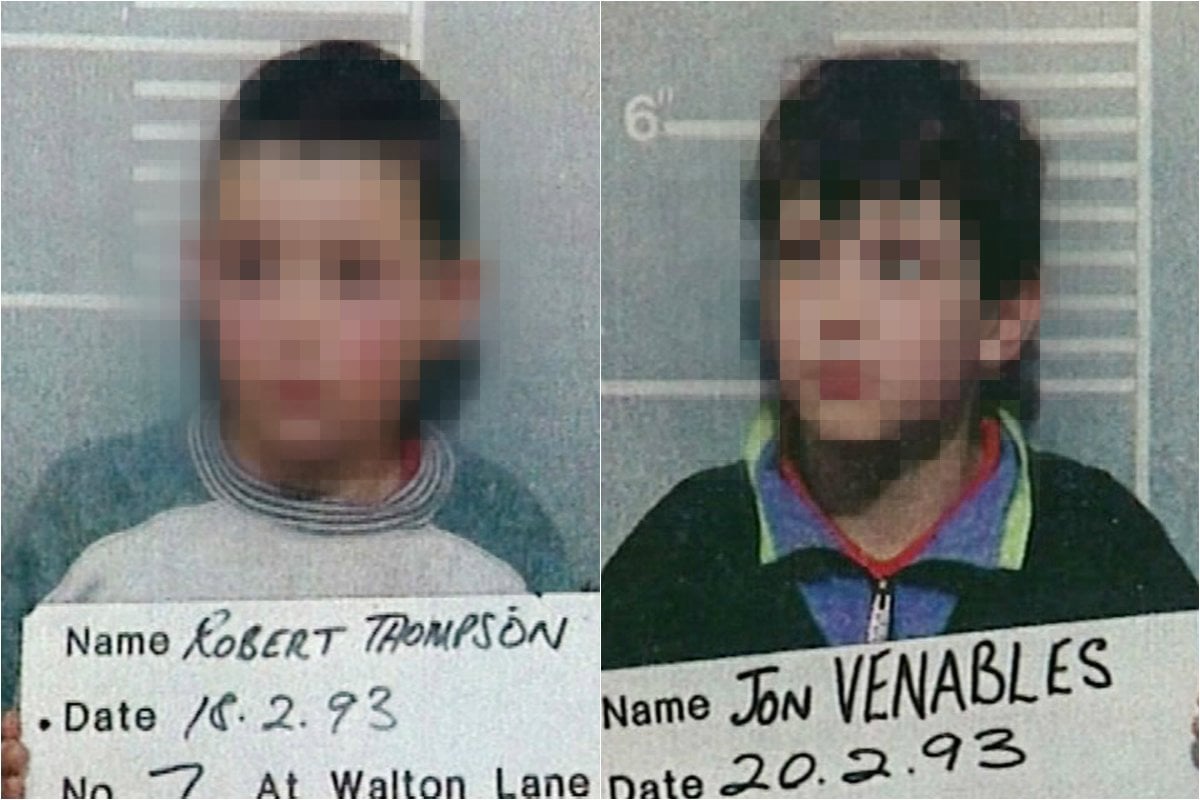 Twenty-six years ago, the horrific murder of a tiny boy in England shocked the world.

While his mother was momentarily distracted, the two boys led the toddler away from a shopping centre in Kirkby, Merseyside.

In the hours that followed, two-year-old Bulger was horrendously tortured and killed before being left by nearby rail tracks. His body was discovered two days later.

On November 24, 1993, Thompson and Venables, then aged 11, became the youngest convicted murderers in modern British history.

Sentencing the two boys to a minimum sentence of eight years, the judge, Mr Justice Morland, declared that the pair had committed a crime of “unparalleled evil and barbarity”.

In 2001, after eight years in prison, Thompson and Venables were released on life-long parole, and given new identities.

What happened to Jon Venables?

Jon Venables was 11 years old when he was sentenced to eight years in a Young Offenders Institute for killing James Bulger.

Following his release from prison, Venables was given a new identity and received extensive rehabilitation.

He was later given another new identity after he told friends he was a convicted murderer, which compromised his identity.

In recent years, Venables - who is now 38 years old - has committed other crimes.

In 2008, seven years after his release from prison, Venables was arrested following a drunken fight. As a result, he was given a formal warning by his probation service and given a caution for having cocaine in his possession.

Just two years later, Venables was jailed for two years after he admitted to downloading and distributing child pornography.

He was released in 2013 until he was arrested once again in 2017 for possessing child abuse images.

In February 2018, Venables was sentenced to 40 months (three years and four months) behind bars.

In September 2020, Venables had his application for parole denied following an assessment of his case. Now, the documents explaining the reasoning behind that decision have been made public.

"Risk factors identified in subsequent reviews include thinking about sex a lot, problems in maintaining relationships, concerns about self-awareness, and his ability to deal with stress," the papers read, according to Sky News.

"Features leading up to his offending as an adult included a sense of dissatisfaction and lack of fulfilment in life, a need for excitement, and a tendency to turn to sex or pornography as a means of coping."

The Parole Board came to the conclusion that Venables was "appropriately located" in jail, and also noted that he has a prison job and is attending courses to help his "propensity for sexual offending".

Although Venables was granted lifetime anonymity worldwide in 1993, James Bulger's father launched High Court proceedings in February 2018 to try to remove his anonymity because he had re-offended multiple times.

"Venables is up for parole any time now, and if it is granted he will be released into the community under a fake name and secret new identity," Bulger said.

"He is a dangerous, predatory child abuser and killer, and I am terrified he will strike again and harm another child like my James."

In the end, Bulger lost his legal challenge and Venables was able to retain his anonymity.

What happened to Robert Thompson?

Robert Thompson was also 11 years old when he was sentenced to eight years for killing James Bulger.

Although Thompson had no history of violence prior to the murder, police believe that Thompson was the ringleader of the attack.

Detective Phil Roberts received the call in 1993, notifying him that two-year-old Bulger was missing.

"I think Thompson was in charge, but they both attacked James," he added.

"They were a match made in hell. A freak of nature. They went out that day to kill – I truly believe that. And if they hadn’t been caught I fear they would have struck again.

"Pure evil, I will never change my mind about that."

Thompson spent most of his teenage years in prison, released when he was 18 years old. In 2010, a social worker who looked after the boy described his behaviour in prison to the Daily Mail.

The social worker said he, or anyone else in the youth detention facility, never saw Thompson cry or show remorse for his actions. Initially, he displayed the complete opposite.

"During his trial, he was obsessed with watching the reports of the case, seeing the van on TV driving him to court. He devoured it all, oblivious to what was going on around him," the social worker said.

"At first, he would ask us when the news was on but he very quickly learned the times of all the bulletins, so in the end we would just leave him with the remote control.

"He always sat there sucking his thumb, a habit he didn’t lose – despite our best efforts – until he was 14."

In the 2018 program James Bulger: The New Revelations, Thompson shared his own view of the crime and its aftermath via his parole testimony in 2001.

“I do feel aware I am now a better person and have had a better life and a better education than if I had not committed the murder,” he told the board, as heard in the documentary.

Kathleen Pettingill had ten children. All of them are either incarcerated, in witness protection, or dead. Listen to True Crime Conversations below.

He claimed that at the time of the murder he was “out of control” and spending time with people who were “committing crimes”.

“I was out of control because my life on the streets was better for me than my life at home – there was nothing for me at home.”

Although Venables broke his parole numerous times, Thompson has lived the last 26 years incident-free and out of jail.

Because of this, there’s not a lot known about Thompson’s post-prison life.

In 2006 it was reported that he was in a long-term relationship with a man who knew who he really was, although these reports were not confirmed.

Reply
Upvote
Why are the faces of the perpetrators of the crime blurred in this article?
C
Cat 2 years ago

I don't think Australia, Canada or the US take convicted felons from the UK. Unless Venerables has another citizenship we don't know about, the idea that they're just going to send him overseas to save money is absolutely scare mongering.

Not necessarily. I can imagine Canada accepting Venables, After all, it just paid millions of dollars compo to a terrorist.