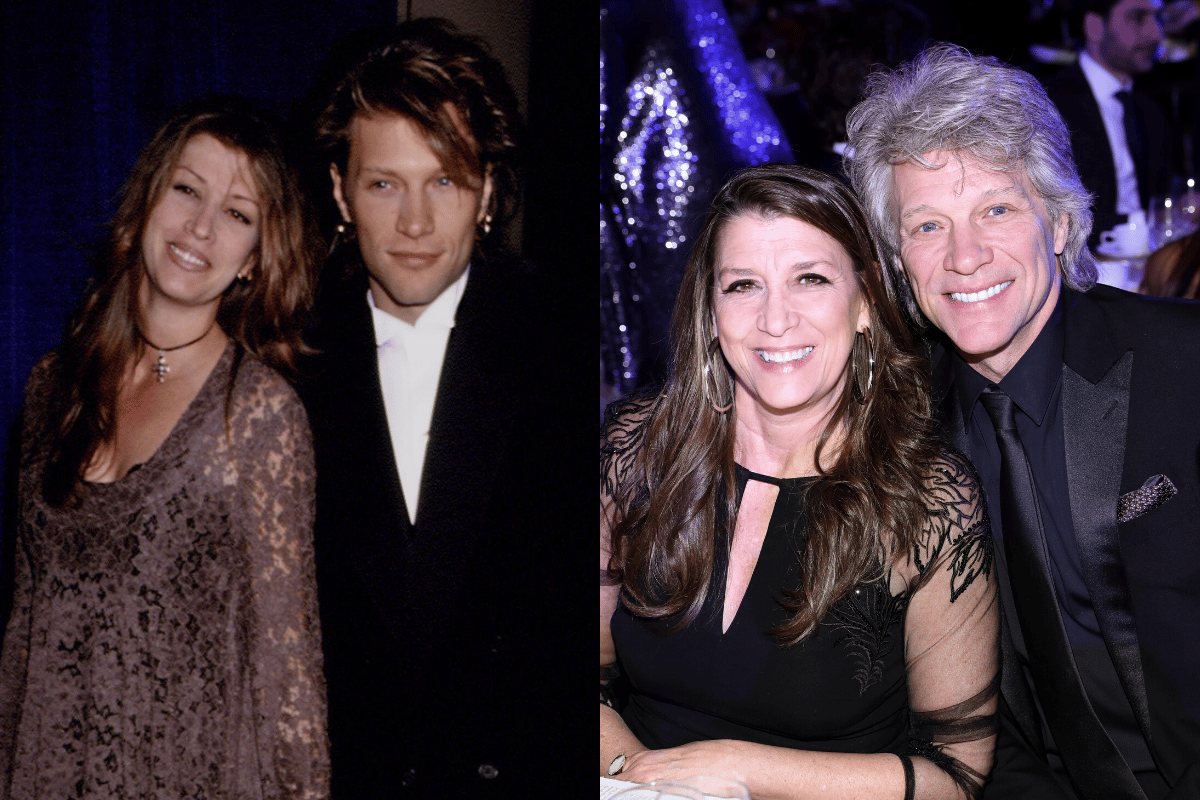 Jon Bon Jovi is a stayer. He’s been a rock star for more than four decades – and he’s been with his high-school sweetheart, Dorothea Hurley, for nearly as long. But there have been a few bumps along the way.

Bon Jovi was born John Bongiovi in New Jersey to John, a barber, and Carol, a Playboy bunny turned florist. He started playing in his first band at the age of 13, and it was around then that neighbourhood women started pursuing him.

"I was in eighth grade, very young, and the guy the MILFs came to see,” Bon Jovi told Men’s Health. “I was a boy toy. They'd buy you a cheeseburger and you'd go, 'Doh-kay.'”

He says it took him “a while” to start to like it.

“I don't know if I'd want my son to have those experiences,” he adds.

In his senior year of high school in 1980, Bon Jovi fell for Dorothea Hurley, a junior karate champion, when she sat next to him in history class. Hurley was dating another guy, but when he left town after joining the military, Bon Jovi swooped in.

By then, he was already starting to make a name for himself as a musician, even sharing the stage with Bruce Springsteen. He was also working as a janitor for his cousin Tony Bongiovi at the Power Station recording studio. The Star Wars Christmas album was being recorded there, and, at his cousin’s suggestion, he ended up singing the track “R2-D2 We Wish You A Merry Christmas”.

In 1983, the band Bon Jovi was formed, and before long, they were topping the charts with hits like “You Give Love A Bad Name” and “Livin’ On A Prayer”. Bon Jovi himself became a pin-up boy, which he wasn’t thrilled with.

Bon Jovi had the success, but he wasn’t living the typical rockstar lifestyle. He was into drugs when he was “very young” – "I mean, I was entrepreneurial even then, buying quarter pounds of dope and trying to make a couple bucks,” he told Men’s Health – but gave them up long before he hit the big time.

“I've always felt I didn't have the mental stability to handle drugs," he explained.

In 1985, he started dating actress Diane Lane, who certainly has good memories of the relationship.

"Every girl should have such a wonderful experience when she's that young," she said on Watch What Happens Live With Andy Cohen.

Just months after the relationship began, it was over. The band’s former tour manager, Rich Bozzett, has claimed that Bon Jovi dumped Lane because she was getting too close to his bandmate.

“Diane was young and wild and loved to party,” Bozzett wrote in his book Sex, Drugs And Bon Jovi. “But she loved to party so much that Jon caught her partying with Richie Sambora.”

Neither Bon Jovi nor Lane has ever confirmed this story. As for the rumour that “You Give Love A Bad Name” was written about Lane, she’s shot that down.

Not long after Bon Jovi split with Lane, he got back with Hurley.

“You come to terms with who you are and what you’re about,” he told Rolling Stone. “That lifestyle is not for me.”

In 1989, when Bon Jovi had the number one album in the US, Hurley was staying with him at a hotel in Los Angeles. He looked out the window and saw his face on a billboard. Suddenly he had the idea of going off to Vegas with Hurley and getting married.

"Come on,” he said to her. “What's better than this, right now, this moment?"

They got married, in secret, with an Elvis impersonator as celebrant.

Their daughter Stephanie was born in 1993, followed by sons Jesse, Jacob and Romeo.

As the years went by, Bon Jovi kept making music and also got into acting, scoring roles in movies like Moonlight And Valentino, and playing Ally’s plumber boyfriend in Ally McBeal.

“I was so anxious to get work I said, ‘I will do the small role, the hunk, just to get enough of a résumé,’” he remembers.

He also got into charity work in a serious way, setting up the Jon Bon Jovi Soul Foundation, which has helped provide 1000 homes for people in need, as well as free meals for hungry people through two non-profit restaurants in New Jersey, JBJ Soul Kitchens.

Hurley, working as a karate instructor and bringing up the four kids, helped keep everything going.

“I’m the crazy visionary with all kinds of things flying, and the seams are all splitting,” Bon Jovi told People. “She’s the one following me with the glue and the thread and needle, keeping it all together.”

Things fell apart in 2013 when Bon Jovi’s daughter Stephanie, then 19, overdosed on heroin while at college and had to be rushed to hospital. He told the Daily Mirror that he didn’t even know she was using drugs.

"It was horrible, a horrible moment,” he said. “It was my worst moment as a father.

“I feel it was a terrible tragic lesson of life but I thank God every day because she is whole.”

Although Stephanie was originally charged with drug offences, those charges were dropped. She’s gone on to work as a camera operator.

Meanwhile, oldest son Jesse has started up a wine brand, Hampton Water, with the help of his dad. Middle son Jake, who has acting aspirations, has been in the spotlight for dating actress Millie Bobby Brown; and youngest son Romeo has just turned 18.

Bon Jovi has said that his life is “much more normal than one would imagine”.

“There are no platinum records hanging anywhere in my house,” he told The Irish Times. “The trappings of rock stardom were never a part of my home.”

He says for a long time, “my younger kids weren’t quite sure what I do”.

But the fact is, he’s been in one of the world’s biggest rock bands and spent decades touring. As he’s admitted in the past, he has “not been a saint”.

However, he remains committed to Hurley.

"I wouldn't trade her in for anything," he told the Daily Mail. "The fact that she's independent and isn't needy or possessive helps and she is just a very strong woman.

“I find that women are much sexier when they age gracefully. I want to see them in cowboy boots and blue jeans and not with so much liposuction that they can't even close their eyes.”

In 2020, when the pandemic hit, Bon Jovi had to put touring on hold. He volunteered his time – up to five days a week – helping out at one of his restaurants, which was providing free takeaway meals.

"There's an in-need population here in New Jersey who depend on us," he told CNN. "Hence, the All-Star Hall of Fame dishwasher is back in business."

He’s now on tour again, after a two-and-a-half-year break, celebrating 40 years of Bon Jovi, the band.

“It’s a gift that God gives you the job you wanted when you were a kid, and that I get to do it still,” he told USA Today. “I'm the luckiest man in the world.”

he’s admitted in the past, he has “not been a saint”

In the '90s on an FM radio show, as a tease the female announcer said: which rock star claims to have been with over six thousand women. My mind immediately went to one man; but her male co-announcer openly said "is it Jon Bon Jovi?".
It wasn't. No, if he had, JBJ would never admit to it. (The female announcer then tried to do the maths on when he would've started and if it would be physically possible. )
S
simple simon 3 months ago