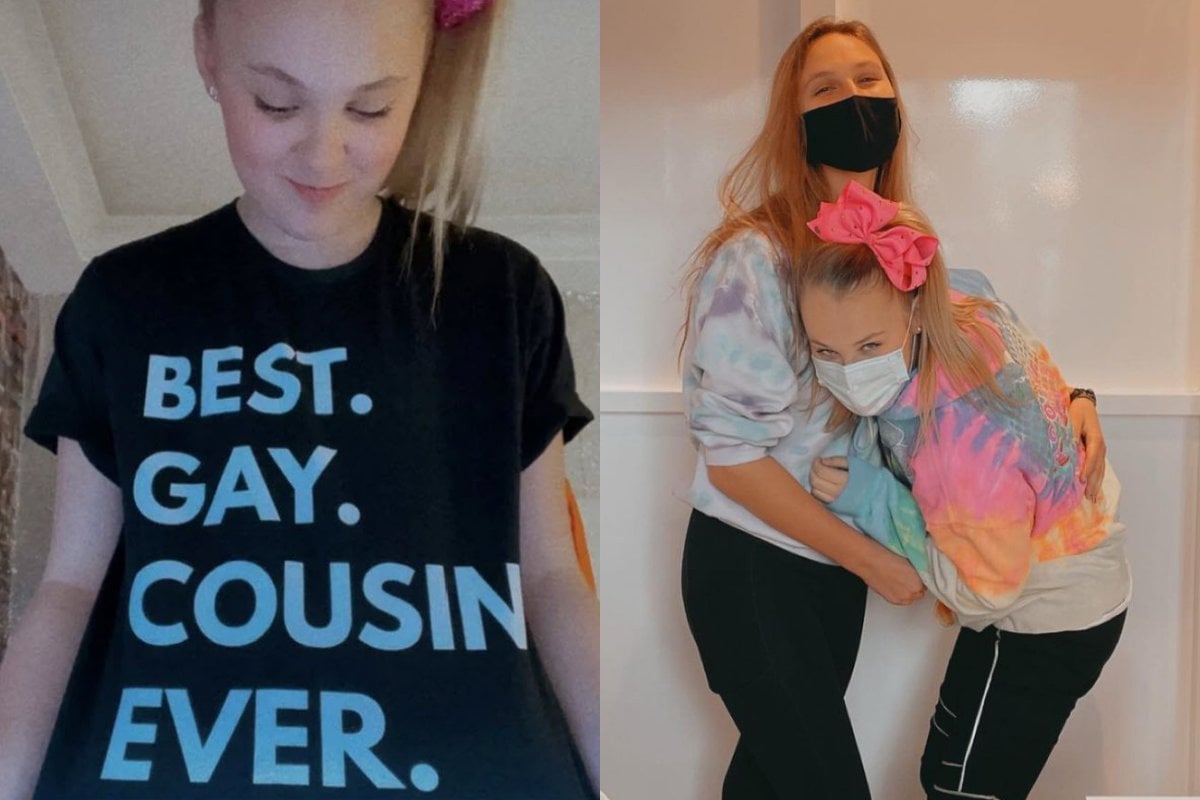 A few weeks ago, fans began speculating that 17-year-old popstar JoJo Siwa was coming out as gay.

At the time, the singer and social media influencer posted a video on TikTok where she lip-synced Lady Gaga's iconic queer anthem 'Born This Way', while wearing a rainbow bow in her hair.

"No matter gay, straight, or bi, lesbian, transgendered life, I'm on the right track baby, I was born to survive," the 17-year-old sung.

She also appeared in a video with the TikTok stars from Pride House LA, as they lip-synced to the lyric "baby now you’re one of us" from Paramore’s 'Ain’t It Fun.'

Then JoJo confirmed it.

The singer uploaded a photo to Instagram and Twitter of herself wearing a shirt that said, "Best. Gay. Cousin. Ever."

My cousin got me a new shirt pic.twitter.com/DuHhgRto7b

Following an overwhelmingly positive response, JoJo has now shared a post dedicated to her girlfriend Kylie to mark their one-month anniversary of dating.

"After being my best friend for over a year, January 8th 2021 I got to start calling this exceptional human my girlfriend… and since then I've been the happiest I have ever been" JoJo wrote.

"She seriously is the most loving, supportive, happiest, protective, and just the most beautiful perfect person in the world. And I get to call her mine! Happy one month to my girl! I love you more and more every day!"

On TikTok, she shared a video of the pair to mark "one month since my best friend asked me to be her girlfriend, and it's been the best month ever".

In a recent interview, JoJo shared the moment that she decided to come out to the world.

Speaking to Jimmy Fallon on in February, JoJo explained that when she was making the TikTok videos with her friends from Pride House LA, she had a feeling that the videos would out her.

"I think this TikTok that we're doing to 'Ain't It Fun' is going to out me," she recalled. "I don't really mind, because it is true, I have the most amazing, wonderful, perfect, most-beautiful girlfriend in the whole world.

"It's not something that I'm ashamed of, it's just something I haven't shown the internet yet," she continued.

It was JoJo's girlfriend who was "super encouraging" for JoJo to post the "Best. Gay. Cousin." shirt photo on social media.

"So I was like, 'Alright, I did it!' and then went back to FaceTiming her."

JoJo also shared that when speaking to Kylie after coming out, she realised just how risky of a move it was.

"If I lost everything that I've created because of being myself and loving who I want to love, I don't want it," she said.

"I'm just so happy. Now I get to share what makes me the happiest with the world and it makes my heart so happy," she added.

Now, if you've seen this news and recognise her face but know little about the pop sensation, here's everything else you need to know about JoJo Siwa.

Joelle Joanie Siwa was born on May 19, 2003, in Omaha, Nebraska. Her father, Tom Siwa, was a chiropractor while her mother, Jessalynn, was a professional dance instructor. (Both parents have since retired from those jobs and now work for JoJo.)

From a young age, Jessalynn knew JoJo was a natural performer.

"I just knew from about the time she was like one, one-and-a-half [years old]; that she was really special because I’d seen a lot of kids," she told Time magazine. "She just liked being on stage, and everyone liked to watch her. I just took it and ran."

In 2012, when JoJo was nine, Jessalynn submitted her solo dance routine to the dance reality show, Abby’s Ultimate Dance Competition. On the same day, producers called and told them that JoJo would appear on the second and final season.

While the show was short-lived, JoJo's flair didn't go unnoticed. The following year, both JoJo and her mum were signed on for the more popular dance show, Dance Moms, and moved to LA.

When appearing on Dance Moms, cast members became jealous of her round-the-clock energy, while the crew were in awe of it.

"She was one of those rare personalities that I couldn't stop thinking about," Dance Moms executive producer Bryan Stinson told Rolling Stone.

However, cast members, including host Abby Lee Miller, became intimidated by the teenager's confidence (she was 12 years old at the time).

Jessalynn and JoJo lasted two seasons on the show.

In 2016, JoJo released her first single 'Boomerang'; a song that addressed her haters.

"I don't really care about what they say, I'mma come back like a boomerang," the 13-year-old rapped.

During the same year, JoJo signed her first merchandising deal with US tween retailer Claire's that saw over 2,000 of their stores stock 7,000 different types of JoJo Siwa Bows. (In 2019, she revealed that over 40 million bows were sold in 2018 alone.)

It was then that her brand was born.

After the deal with Claire's, JoJo was signed to Nickelodeon. And instead of just appearing on her own show, she appeared all over the network. In TV specials, movies, series and her own animated series about her and her dog, The JoJo and BowBow Show Show.

While at the same time, JoJo began creating weekly videos for her growing YouTube account, which now sits at 12 million followers.

"I never forget where I came from with YouTube," JoJo told Rolling Stone. "I wouldn’t be where I am today without it."

Her brand has since expanded, and you too can dress like JoJo.

The 17-year-old is onto her sixth drop of JoJo's Closet, which is sold in the US at Walmart and Target. Think glittery sets, bedazzled jackets and many, many bright colours.

In 2018, JoJo embarked on her first major concert tour, titled D.R.E.A.M. The Tour. She performed in 89 cities in four different countries, including Australia and The United Kingdom.

While the constant promotion of JoJo as a brand might suggest that the 17-year-old is contracted into dressing in this child-like way, she insists otherwise.

And to anyone who thinks she is, she said, "It's a whole load of cupcakes and unicorns."

"This is all I've known since I was 9," she told Time. "For about half my life now, it's just been what it is. There will be a time when I age up. Everyone does grow up."

After the release of Bohemian Rhapsody, JoJo became obsessed with Queen and Freddie Mercury. She's watched the film countless times.

"The thing with Freddie is that he was unapologetically himself," she told Rolling Stone.

"He was a gay immigrant," she said. "He did not belong. Kids, when he was in school, called him Bucky because of his teeth. To me, he was perfect, and I would love him, and I would be his best friend if he was still here today. He was just himself, and no one else will ever be him, because he’s just such an icon."

Unapologetically herself, it's clear JoJo offers the same inspiration to others.

if you don't think jojo siwa coming out as gay is a big deal;

This article was originally published on January 23, 2021 and has been updated.

Reply
Upvote
Love JoJo. Her songs have AMAZING messages for young girls. Be yourself, be kind, be happy. She doesn't dress like a kardashian *too old.
In a world that pressures young girls to grow up too fast, she is a breath of fresh air. And with her comming out she is  only going to make even more boys and girls look in the mirror and know there is nothing wrong with them. Love JoJo.....!!!! 💜💜💜🦄🦄🦄🍭🧁
M
mamamia-user-515500734 2 years ago