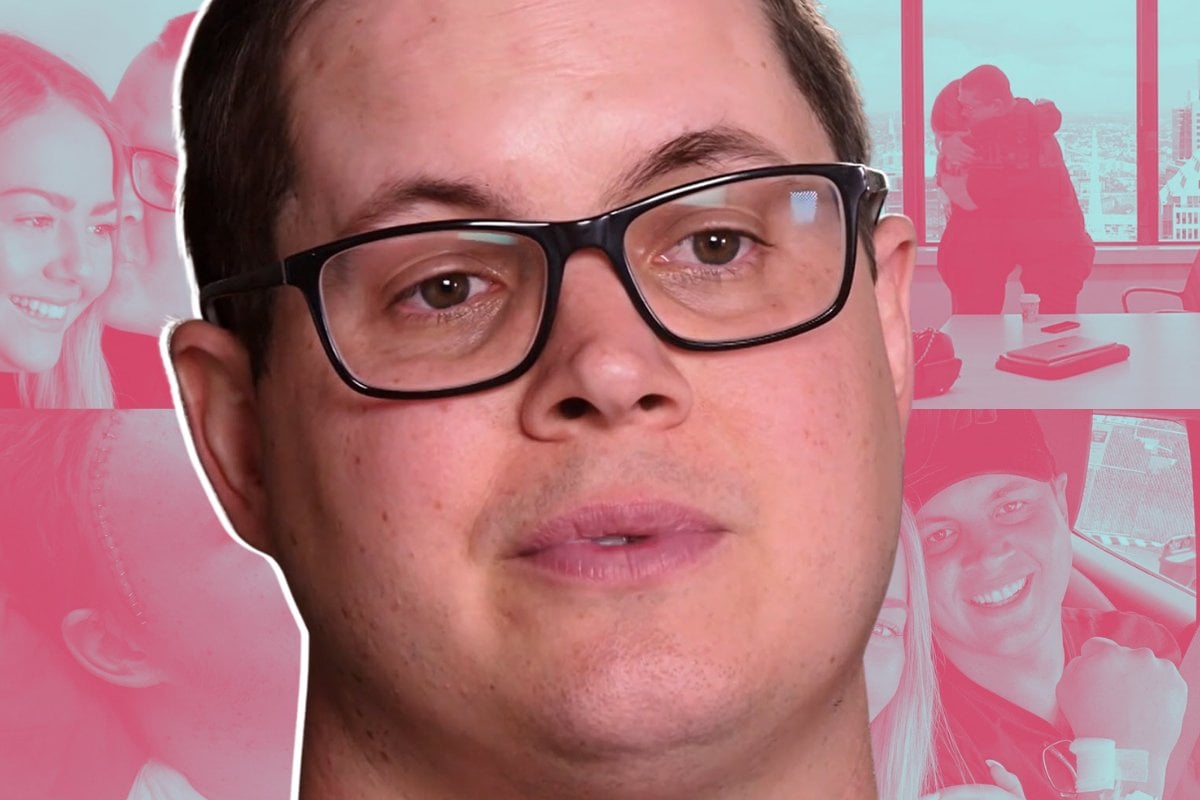 In 2011, a cheeky 23-year-old concreter walked - or, more accurately, moonwalked - onto the X Factor Australia stage as the first step towards his dream of performing for people all over the world.

What came next was also a dream: Johnny Ruffo placed third on the reality singing competition, went on to compete and win the 2012 season of Dancing With The Stars, signed a record deal and opened for some of the world's biggest acts, including One Direction and the Backstreet Boys.

Then he turned to acting, playing fan favourite Chris Harrington on Home and Away from 2013-2016.

For five years, Ruffo was everywhere.

By 2017, Ruffo had been suffering from bad headaches for a while. He put it down to needing to make lifestyle changes, but it was clear things were more serious when one evening he tried to speak to his partner, Tahnee Sims, only to find he was unable to string together proper sentences.

Sims drove him to the hospital, where Ruffo slipped into a coma and hospital staff were unable to wake him. It was then they discovered he had a 7cm brain tumour that needed to be removed instantly.

Ruffo and Sims recalled this night on a 7NEWS Spotlight: Fight Of His Life documentary.

"They said 'there's a 20 per cent chance he might die from the operation'," Ruffo recalled.

"But if I didn't have the operation, there was 100 per cent chance that I would die, so it's not really much of a choice."

Surgeons removed 95 per cent of the malignant stage three oligodendroglioma, as the final five per cent was too close to nerves.

He underwent radiotherapy and chemotherapy to remove what remained.

"Everything came crashing down all at once," Ruffo, now 33, told Spotlight. 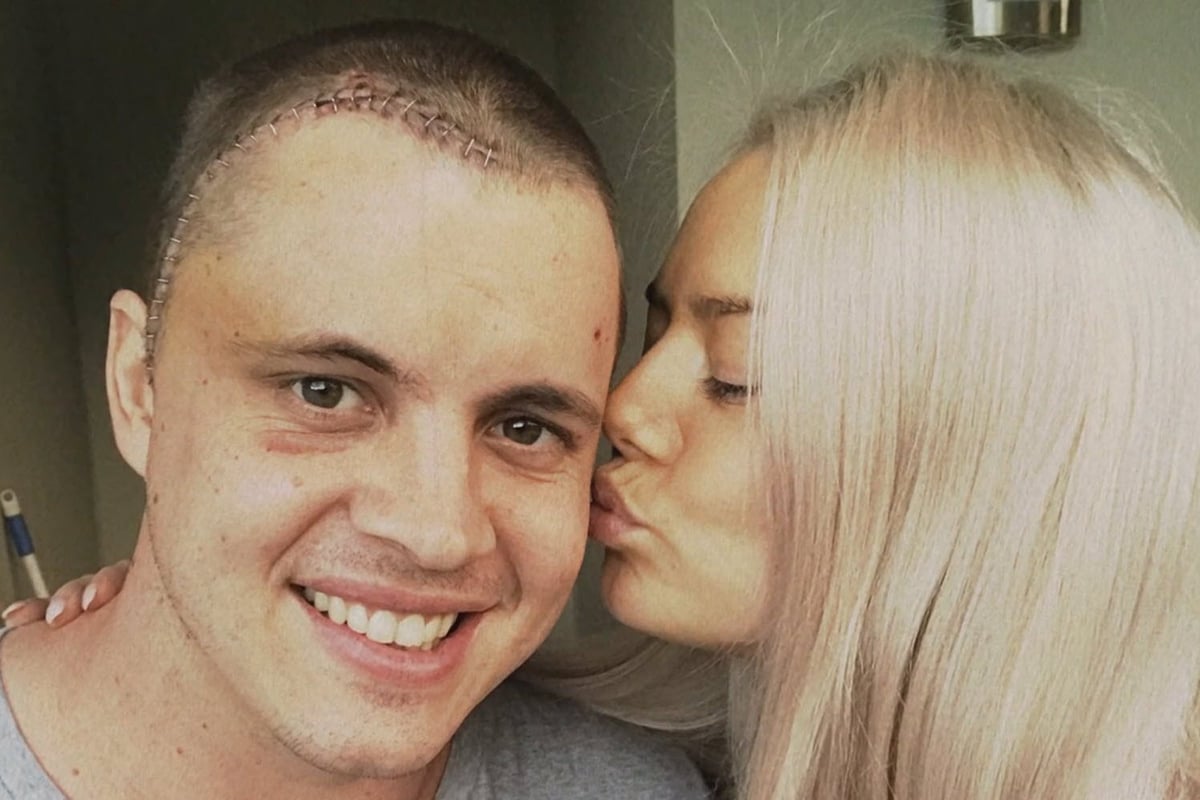 Guy Sebastian, who was Ruffo's mentor on X Factor, said hearing the news of Ruffo's cancer was 'hard to stomach'.

"I knew if anyone was going to fight hard it would be Johnny. He is a fighter and he'd never been one to take no for an answer," Sebastian told Spotlight.

"But this was a battle I don't think anyone could've really prepared him for."

Ruffo said the enormity of it all only sunk in about four weeks into radiotherapy.

"I was at home one day and I watching television, and I just went to scratch my hair and I pulled my hand forward and I had a whole clump of hair in my hair.

Two months after discovering the tumour, Ruffo sat down with The Project's Carrie Bickmore - who started her Beanies 4 Brain Cancer charity after the death of her husband Greg Lange - for an interview.

He told Bickmore he'd had "an epiphany about life".

"You just appreciate it a little bit more," he said. "Looking back I wasted a lot of time just doing things... I had a lot of fun, but now I feel like I really want to focus on my work and my career and things that make me happy.

"It could have quite easily been over for me that night. It’s almost like having a second chance and you appreciate things a lot more."

He then gave updates about his condition regularly on social media, but mostly, Ruffo remained out of the spotlight during this time.

Then in 2019, Ruffo publicly stated he was "currently clear of cancer".

He told Spotlight the day he found out about his remission was the complete opposite of that day in the shower: "The greatest day of my life," he said.

"I just felt like I can finally get back to life and living again."

For just over a year, life returned to normality. Ruffo returned to music with his first single in four years, titled 'Broken Glass' about his experience of feeling 'down and out' and focused his time on his relationship with Sims.

"She has more strength than anyone I've ever met," he said of his partner. "I can't imagine life without her."

Frankly, he said, he would not be here today without her in his life.

"The first time I went through all of this, if she hadn't taken me to the hospital, I would've gone to bed that night and not woken up... She saved my life."

In September 2020, it was Ruffo's love of music that warned him that something was once again wrong. He began forgetting lyrics and chords to songs.

"I know that I know how to play it, but it's just not there," he explained to Spotlight.

On Sims' 27th birthday, Ruffo ended up in hospital again with seizures.

For nine days, he remained semi-conscious and Sims wondered if this was when she would have to say goodbye.

"I couldn't have the conversations I wanted to have with him, so that was dark thoughts where I thought 'is this it? Is this where I say goodbye, in the bloody hospital after everything?' There's definitely dark times - I'm not gonna lie. But, we remain positive because you have to. It's not a choice."

Asked if he'd considered the impact on her if things don't go the way he hopes, Ruffo pondered for a moment.

"Not really," he responded. "Because that's not going to happen. I'm going to fight tooth and nail, no matter what... I'm not going to let her down."

He announced the cancer had returned in a November Instagram post, saying he "will dig deep and beat this sh** disease again," alongside a photo with Sims.

Ruffo's doctor, Professor John Simes, told Spotlight his cancer is extremely rare, at less than 1 per cent of all brain tumours.

Sims said despite Ruffo's strength and determination to keep going no matter what, there were always doubts.

After months of chemo, tests, medication and the unknown, Spotlight's cameras were present to hear Ruffo and Sims learn if the cancer was responding to treatment,

It was great news.

"The spine's all clear and the tumour in the right frontal lobe and the brain stem, all stable, everything's great," Ruffo said. "I'm so happy."

"Every second of every minute of every hour of every day is just that extra bit more important, because you do know that anything could happen," he said.

7NEWS Spotlight: Fight Of His Life is available to watch on 7Plus.