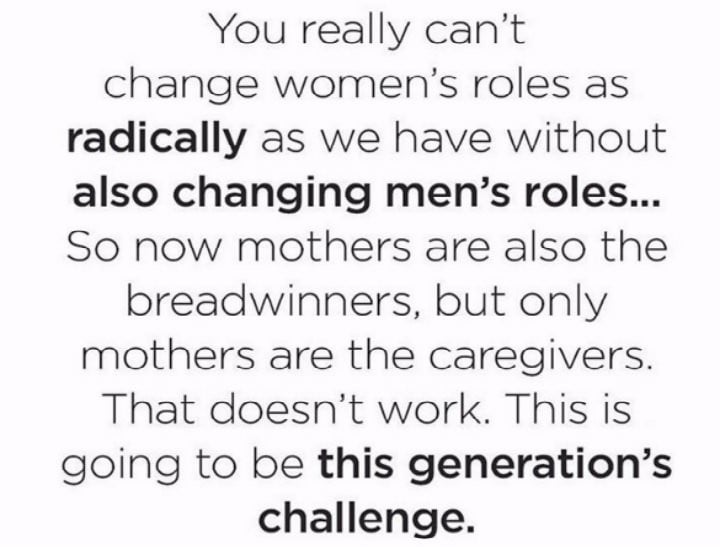 “Last Monday was Iggy’s sixth birthday and I’ve missed every single one of his birthdays. I won’t miss another one.”

That sentence, delivered by the outgoing MP and former Treasurer Joe Hockey in his farewell speech yesterday, with visible emotion, both broke and melted my heart.

The tenderness in his voice and the gentle look in his eyes as he looked up at his son Iggy, broke me. They were the words of a Dad, not a politician.

And irrespective of your political persuasion or your take on Joe Hockey’s achievements, they are the words of a dad that are worth listening to.

Joe Hockey is not the first politician to have missed milestones in his children’s lives, and he certainly won’t be the last. If it weren’t for the change in leadership last month it is highly unlikely that Hockey would – or could – have made the same promise to his son.

But that doesn’t change the fact that his career has kept him from spending time with his family, and that it hasn’t been without difficulty.

Was that his explicit choice? Yes and no. Life as a federal member is a consuming and demanding job that will always entail sacrifice. But it’s difficult to believe anyone would enter politics to get away from their family. It’s a side-effect many endure, that I suspect few enjoy, and it’s certainly not limited to politics.

The reality is that working entails missing things in our children’s lives – big and small. Work hours are not always compatible with school concerts, swimming carnivals, father’s day breakfasts, mother’s day breakfasts, week night dinners spent around the kitchen table, even birthdays. There are a number of jobs that render these things almost impossible on a regular basis. For nurses, police, taxi drivers, ambulance drivers, firefighters and the myriad of shift roles that our communities depend upon, there is little scope to fit work around all the events that perhaps in an ideal world you could always make.

Having that freedom is a luxury, few roles provide. That isn’t always easy but it’s also part of working life. And it’s not just felt by mothers.

How many politicians or male leaders, in days gone by, would have said what Joe did? Not that men before him wouldn’t have felt that way or thought that way, but how many would have actually said it? Out loud, in a public forum, directly to their child?

I would argue very few, which is partly why Joe’s words are powerful. They remind us that fathers are parents, even fathers with demanding jobs.

As complicated as the issue of meshing work and family is for mothers, it is wrought for fathers too. In the same way we still struggle to reconcile women as breadwinners, we struggle to reconcile fathers as caregivers. We are, in some ways, as uncomfortable about men combining hands-on parenting with work, as we are women.

Last year Cameron Clyne, the former CEO of NAB, retired from the CEO role because he wanted to spend time with his kids and his wife.

“I’ve been CEO of NAB or Bank of New Zealand for eight years, so my kids were four and zero when I started doing this,” he says. “I can guarantee that I’ll be spending a lot more time with them, because I’ve missed an enormous amount of their childhood.”

He also said that his intention was to be married for longer than he is the CEO of anything. The subtext in these comments was clear: being in a high level executive position took a toll on his family.

These comments are rarely made in public because they are highly personal. But, because of that we rarely hear how fathers feel about the way they combine work and family. It makes it easy to assume they feel nothing. But in actual fact, what are the chances of Joe Hockey and Cameron Clyne being the only two working fathers in the country to grapple with familial guilt? Slim at best.

The model from the 1950s,  where men went off to work, and women toiled at home, is a long gone relic but the expectations from the era still linger.  It is women, more often than not, that we construe as carers. We use ‘mum’ as shorthand for ‘parent’. We ask women if they want or need flexibility.

We ask women how they juggle work and care for their kids. We ask women about their guilt, about their strategies for being an engaged parent and a productive employee, and about their satisfaction. We don’t ask these questions of dads.

And aside from placing an enormous weight on women, this inordinate focus on mums dismisses dads out of hand.

Men who want to be more involved at home and seek out flexible work arrangements or take time off with a baby, fight against this stereotype. Are they less ambitious on account of wanting to be home for picks up and dinner time? What sort of a man places his family on the same pedestal as his job?

So say what you will about Joe Hockey, but don’t dismiss his words as a father. The kind of father who can look his son in the eyes and tell him he wants to spend more time with him, in front of his peers, is exactly the kind of father we need to see more of. Because every time we see a Dad demonstrate their love and commitment to their family, it’s harder to dismiss their role. It’s harder to assume they don’t care. It reminds us that fathers are parents.

I'm sorry, but I don't believe Mr Hockey's words. They don't mesh with what we have seen of his actions, and I bet his behaviour won't alter too much in the future.
Every person balances work and family life. Personal beliefs and values are used to tip the scale one way or the other. Politicians claim to support family values, but the reality is that most pollies place more 'weight' on their careers and political life, spending much more time and effort in that area of their lives. There is a choice and they make it.

Every man who leaves politics says they're doing it "to spend more time my family". Well if that was a major issue, they could have left at any time; they didn't have to wait until their career plan was basically over.

I once heard a former independent suggest any politician who says they're leaving to 'spend more time with my family' should have to come back a year later and state how much more time they have actually spent with their family.