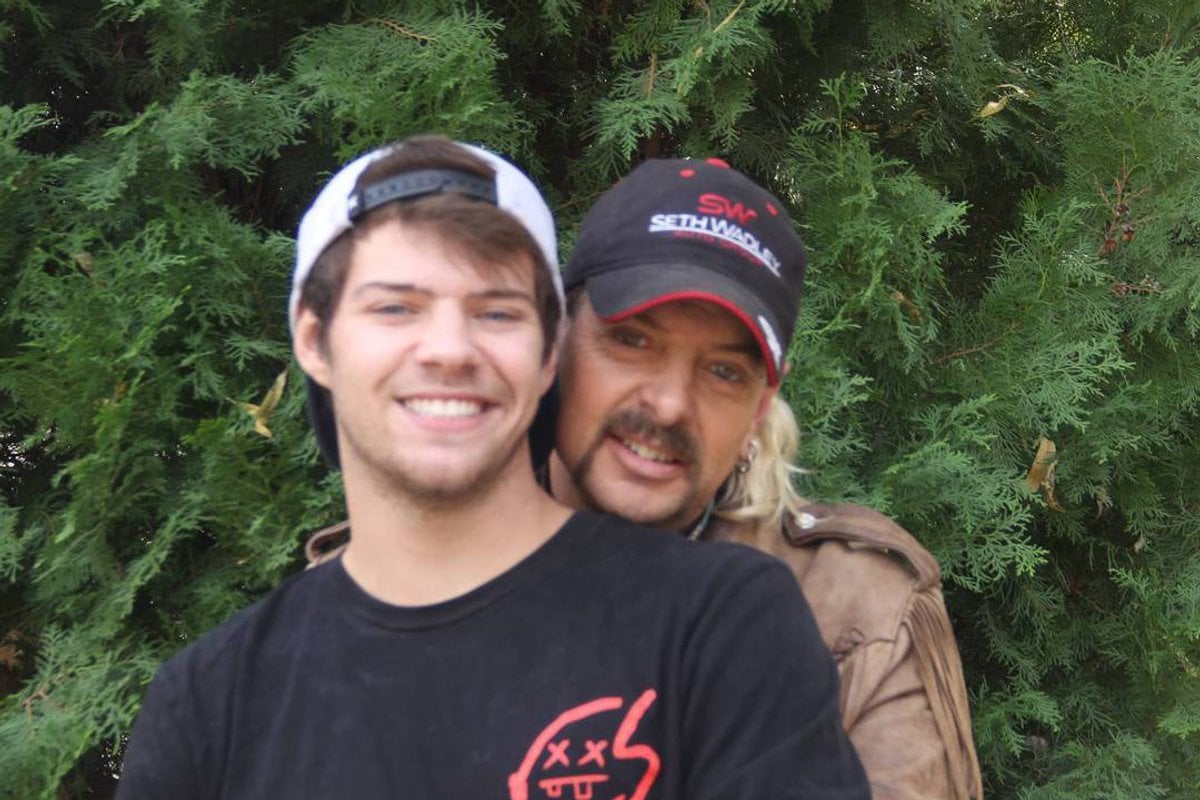 Joe Exotic, a self-described “gay, gun-toting cowboy with a mullet,” and his husband Dillon Passage are seeking a divorce, one year after the Netflix documentary Tiger King became a global sensation amid the coronavirus pandemic.

The series focused on Joe Exotic, his zoo, his vendetta against Carole Baskin, and his romantic relationships with younger men (among so many other things like a man doing an interview in a bathtub etc).

Watch the trailer for Tiger King here. Post continues below.

Exotic is currently in jail and announced via his social media page, run by a friend, that "Dillon thinks having to sleep alone and not have me out there is so rough and hard to deal with to the point he has to leave me...

"Let me tell you what rough really is, spending every day locked in an 8x12 foot box, tied naked in a chair so long my wrists bleed and you shit and piss on yourself, and for what?"

Th 58-year-old said he felt abandoned by the man who promised to "stick with [him] for better or for worse" in 2017.

"All I ever wanted was to mean something to someone. Why is that so much to ask?"

Passage responded to Exotic's public statement on his own Instagram, where he has 125,000 followers.

"When Tiger King was released on Netflix a year ago, my life was thrown into a world of media and public attention," he explained. "Something that was completely foreign to me. I felt as if I had a microscope constantly looming over me which was and still is incredibly uncomfortable."

He continued: "To answer the main question the public wants to know, yes, Joe and I are seeking a divorce. This wasn’t an easy decision to make but Joe and I both understand that this situation isn’t fair to either of us."

Here is everything we know about their marriage.

How they met and got married.

Joe Exotic met Dillion Passage on a dating app in 2017, and the two married just months later on December 11, 2017, at a small, intimate ceremony. Passage was 21 years old, while Exotic was 54.

“I never figured I’d marry Joe Exotic. I had no idea who he was. I never Googled him or anything," Passage, now 25, shared during an interview with People last year.

When discussing marrying someone more than 30 years his senior, Passage told US Weekly, “I like older guys! Maybe I have daddy issues, who knows?

“Joe was just super down to earth and he didn’t act like a 55-year-old [when we met]. He had the energy of a 25-year-old. He was fun to be around and that’s really all that mattered to me.”

Exotic, who had been married before, had lost his first husband, Travis Maldonado, only months earlier when he accidentally shot himself in the head.

Despite this being a fresh, devastating moment in the newlywed's lives, Passage explained the two of them spoke about the tragedy openly. And, not only was Exotic battling this event but Passage had his own demons too.

“Joe had a long conversation with me whenever he proposed. He was like, ‘I need somebody who’s going to be here for me. You may not be in love with me right now, but you will be',” Passage told US Weekly.

“I was in a bad place in my life and Joe really was helping me out and getting me healthy. And it was good to have somebody who I felt could take my loneliness away and bring me out of my depression and be there for me no matter what. And Joe made me feel like that.

"He would talk about Travis a lot and then he’d apologise to me and I’m like, ‘No, like there’s no need for you to apologise. You know, this is something that was very traumatic to you and Travis was very special, so I want you to be able to talk to me about how you feel," shared Passage.

When Joe Exotic went to prison.

Less than a year after their wedding, Exotic was arrested for attempting to hire someone to murder his arch nemesis, Carole Baskin. Six months later, he was convicted on two counts of murder for hire and nine violations of the Endangered Species Act and sentenced to 22 years in federal prison.

Last year Passage said, "I’m not going anywhere. Joe was there for me in my darkest moments. I’m not going to just abandon him when he needs support more than anything".

Less than one year later, the pair are now splitting.

Exotic and Passage have always been open about the complexities they've had with Exotic still in prison.

“He’s like, ‘I don’t want you to be alone. I know how hard it is.’ And I’m just like, ‘You know, I don’t need anybody to do that right now. I’m kind of focusing on me and what life has to throw at me," Passage told US Weekly last year.

“I’ve been through a lot. I’m only 24 years old. Nobody ever would have expected that this would happen or that, you know, my life would be this way. But he said, you know, ‘If you ever find somebody that is important to you and you think that you need to move on, I’d be OK with letting you do that,'.”

Passage did live in Florida where the two previously resided together and he would often share updates on his Instagram about how Exotic is doing in prison. But he is now stepping away from his husband, but says he will continue to care about Exotic's fight to be released from jail.

"I will continue to have Joe in my life and do my best to support him while he undergoes further legal battles to better his situation," Passage said on Instagram.