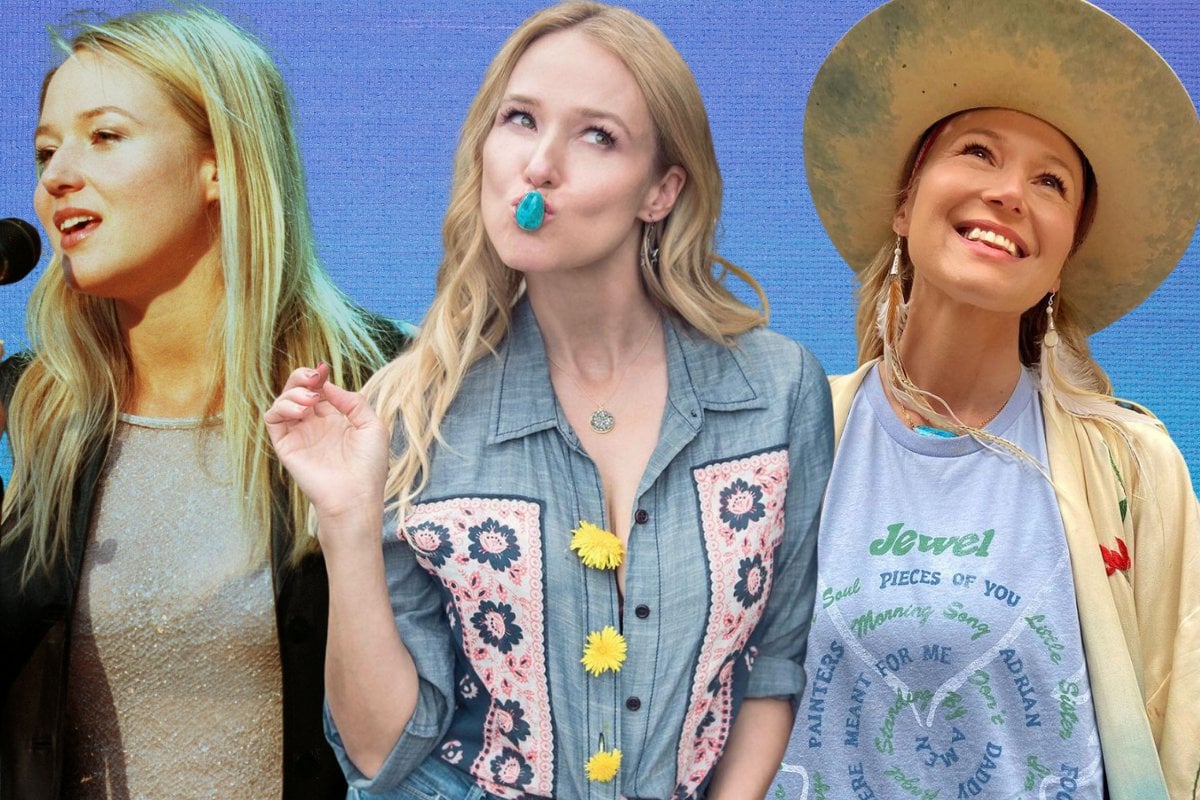 The album, which featured the songs 'You Were Meant For Me', 'Foolish Games' and 'Who Will Save Your Soul', sold over 12 million copies.

Jewel's singles were played on radio stations around the world, she became a style icon, and she defined what it meant to be a woman forging her own path in the 1990s.

Watch: The celebs are using their time at home to get creative. Post continues below.

Then, just as quickly as she burst into the zeitgeist, the singer-songwriter disappeared into the fringes of pop culture.

Let's take a look at Jewel's early life, her rise to fame, and what the 46-year-old is up to now.

Jewel Kilcher was born in Payson, Utah, on May 23, 1974, to her parents Atz and Nedra. Shortly after her birth, her family relocated to a rustic ranch in Homer, Alaska.

According to Rolling Stone, they had no running water or electricity and wouldn't eat anything they didn't kill or can themselves.

At six years old, Jewel started touring with her family's band. Two years later, when her parents divorced, her mum left and Jewel stayed with her dad.

"Then my parents got divorced when I was eight, and my dad and I became a duet," she told Borders Media. "And so we'd tour all over honky tonks, and fisherman and lumberjack bars, and biker bars, and bank openings."

Left alone with her father, he became angry and abusive. He would make her practice music for five hours a day.

"I'm sort of what people would call a junk bond kid. Nobody would invest in me. As a human, as a child. My mum left when I was eight," she told Fox Business Network.

"My dad had a lot of trauma from his own childhood, and then went to Vietnam and picked up a lot more trauma. And when my mum left, he suddenly found himself a single father and was incredibly anxious, and turned to drinking to try to calm that anxiety, and he became abusive when I was eight."

It was around this time that she also began to be harassed by drunk, much older men, at gigs.

On a recent episode of Armchair Expert, she recalled the time a man came out of the restroom and gave her a dime.

"He puts a dime in my hand," she explained. "And he closes my little fingers one at a time and he goes 'Call me when you're 16, you're going to be great to f*ck when you're older'."

"I don't even know what that means? I guess it's a blow job joke?"

After putting herself through Interlochen arts school in Michigan, Jewel moved in with her mother in San Diego.

When she was fired from her job for rebuking her boss's advances, she was forced to move into her van.

She lived like that for a year and would often spend her days parked in grocery store carparks, playing music in the back of the van.

"I was propositioned by exclusively rich, married businessmen," she told Armchair Expert. "Men would straight up walk up to me, they were on their way to buy milk, that was someone sensing vulnerability and seeing whether they could leverage it."

Then, while she was in hospital with a kidney infection, her van was stolen, and she became homeless.

"It's very dehumanising to be homeless," she told FOX Business Network. "You're really reduced to being animals. You worry about food, shelter, safety, and water 24/7. You're an animal. You're just stuck on survive."

During this period of homelessness, one of Jewel's bootlegs was played on a radio station. This led to a record label tracking her down and signing her.

"It was like being Cinderella in the pumpkin. I was offered a million-dollar signing bonus," she said.

Not long after, Pieces of You was released. By 1996, when she was still only 21, Jewel was an international star.

She had an affair with actor Sean Penn, starred in a movie, performed for Pope John Paul II at the Vatican, and played at the 1999 version of Woodstock.

How Jewel got into debt.

After Jewel rose to fame, her mother took over her finances.

At 30, she realised she was millions in debt and that her mother had been stealing from her. A lengthy legal battle ensued and Jewel has been estranged from her mother since 2003.

"I found out that not only was all my money gone, but I was several million dollars in debt. The same year I came to believe that my mum, who was also my manager, was not the person I thought she was," the singer-songwriter wrote in her memoir, Never Broken, Songs Are Only Half The Story.

What is Jewel doing now?

In 2014, Jewel announced her split from her husband, nine-time world champion rodeo cowboy Ty Murray. The pair married in 2008 and welcomed their son, Kase, in 2011.

"My husband, friend and partner of 16 years and I have decided to get a divorce," she wrote in a blog post at the time. "Ty and I have always tried to live the most authentic life possible, and we wanted our separation as husband and wife to be nothing less loving than the way we came together. For some time we have been engaged in a private and difficult, but thoughtful and tender undoing of ourselves. Allowing ourselves the time and space to redefine what we are to each other with love rather than malice."

In 2016, Jewel moved back to Alaska to raise Kase.

Her dad and brothers also star in the reality TV series, Alaska: The Last Frontier, and the singer has even featured on a few episodes herself.

After topping the pop charts, Jewel has dominated the country music charts for the past decade. Her first country album, Perfectly Clear, was released in 2008. Her 2015 album, Picking Up The Pieces, features a collaboration with Dolly Parton.

The singer-songwriter has also starred in a bunch of Hallmark movies, and she now runs a mindfulness and jewellery business.

The now 46-year-old regularly speaks about her own experience with homelessness to raise awareness and to advocate for people who find themselves on the streets.

"I was a homeless kid who was stealing," she said at the 2017 SALT conference in Las Vegas. "I didn't have $40 to buy a dress, much less to get any housing."