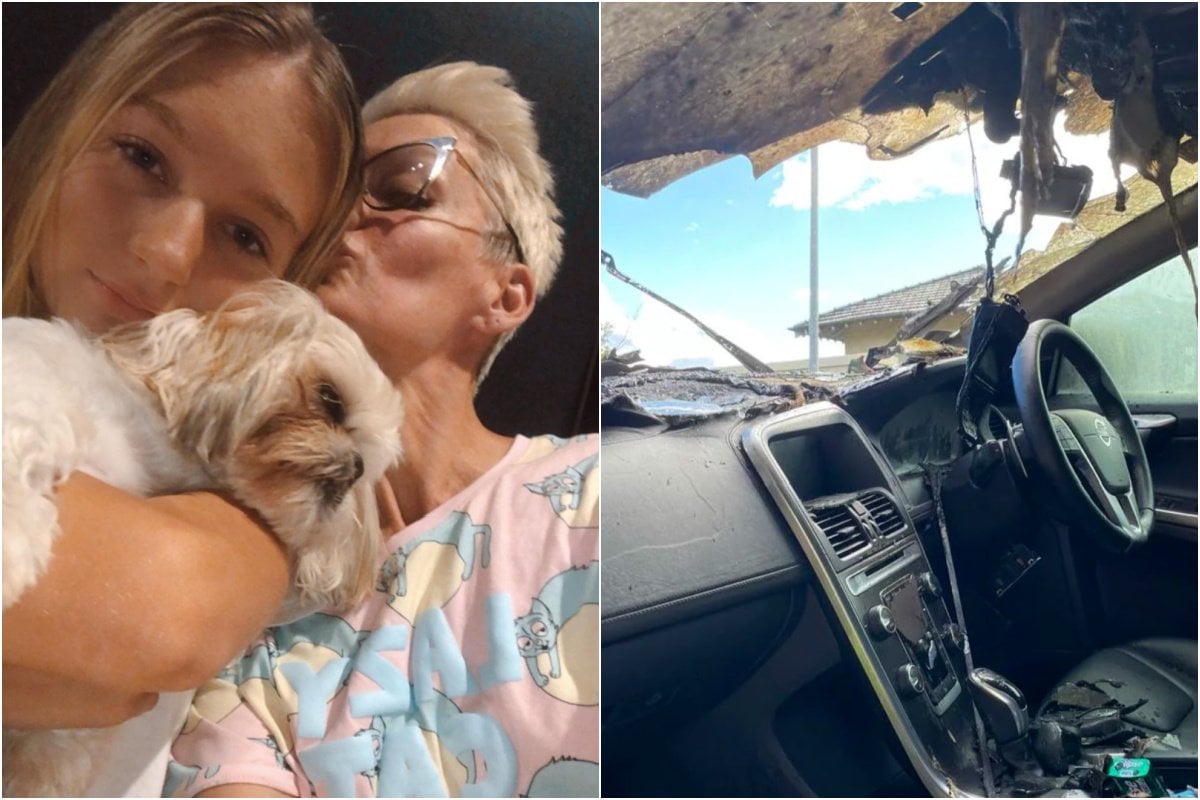 Journalist Jessica Rowe and her eldest daughter Allegra, 14, were on the school run on Thursday afternoon when a bus driver spotted smoke coming from the bonnet of their car.

They were just outside Allegra's school at around 3.45pm when the car started slowing down.

"It was really slowing down and the smoke started pouring out. I was in a bit of shock thinking what is actually happening, and Mev the bus driver was coming down the other direction and he stopped his school bus, got out, said 'get out of the car it's on fire' and got us out," Rowe told Sunrise.

Watch: Jessica Rowe speaks to Nat and Kochie about her and Allegra's escape. Post continues after video.

Within minutes the family's Volvo XC 60 was engulfed in flames.

Images of the wreckage show extensive damage, with the entire front of the vehicle burnt out.

Apart from being a friend - had dinner just last night - extra, extra happy & relieved one of the most beautiful souls on the planet - @JessRowe & girls are unscathed & fine after their car caught on fire on the school run. ❤️🙏🏻 https://t.co/JBYsR3NxcQ @newscomauHQ @MattYoung pic.twitter.com/04pwIMTXAH

"Thank you to the thoughtful, fast thinking and kind school bus driver Mev who got us out of the car, called the fire brigade, cleared the road and then stayed to drive us home," Rowe said in an Instagram post on Thursday night.

"Thank you to the police and paramedics who are angels. And the tow truck driver! And the mums and dads who stopped to help. We love you," she added.

Peter Overton, a Channel Nine news anchor and Rowe's husband, told 2GB about getting a FaceTime from his daughter from the scene.

"Everyone at work could see that I was absolutely traumatised when I saw my 14-year-old on FaceTime absolutely inconsolable," he said. "I saw in the background the car ablaze."

Overton skipped the news last night, rushing home to be with his family.

"Just to see her absolute state of despair, that’s why I can’t wait to see her. I don’t care about the car, They’re all okay and they’re home now. There was a real fear that the car could’ve exploded," he told 2GB on his way home.

Rowe told Sunrise while she was "fine," she felt for her daughter.

"She was really quite upset and sort of the shock of it. And I think too being a teenager because there were other kids there filming and all of that, she didn't like being the centre of what was happening. But she's okay, she's off to school this morning and I was so proud of her."

Speaking on KIIS FM, Rowe told Kyle and Jackie O what she managed to grab from the car before it went up in flames.

"I do like a costume… so I had a cat head in the boot. Sometimes I like to embarrass my children. I pick them up and I put the cat head on. Luckily I could rescue that from the boot," she said.

Rowe has an array of comical hats that she often wears while cooking alongside her Instagram movement #craphousewife.

She explained that Overton told her when he got home that evening, "Pussycat, that is not funny. Put it in the bin. You’re not keeping that."

She also told Sunrise she was glad she "wasn't in pyjamas" as she often is on school pick up.

Authorities do not know yet what started the fire, with reports suggesting it could have been a mechanical fault.

Overton told 2GB he had plans to track down Mev's details to "get in touch to give him a very big thank you" for saving his wife and daughter.

Read: Jessica Rowe on the 11 things you should learn before you turn 50.