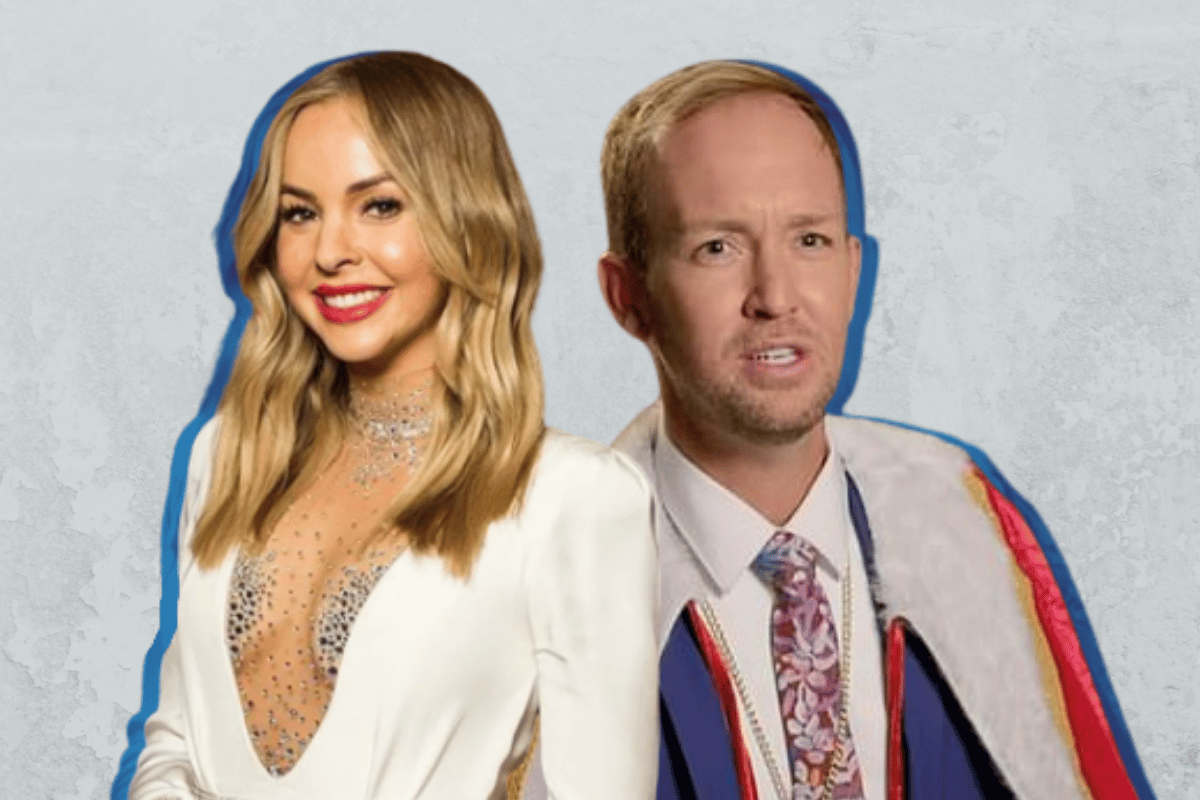 1. Jess from The Bachelorette has been fined for his gross behaviour. Here's how Angie Kent responded.

Angie Kent has some things to say about former Bachelorette contestant Jess Glasgow, who's been fined $5,000 for his behaviour on the show.

The then-Noosa Shire councillor appeared on two episodes of The Bachelorette in 2019 before Angie asked him to leave the show after making misogynistic and offensive comments.

"Last week, the counsellor conduct tribunal went ahead for the Jess Glasgow investigation into his behaviour on my season of The Bachelorette," Angie wrote in a post on Instagram yesterday.

While Angie said she was "torn" whether or not she should say something, she thought, "If I don't say anything I feel it would make me complicit? Or that I am ok with this type of behaviour?"

"This situation isn’t just about me, it is what we have been enduring overall as women for centuries," she continued.

Angie went on to call out Jess for blaming "his multiple shameful performances on an edit".

"Jess did apologise to me right after the episode aired (funny that it had to take the episode to air before I received an apology. But hey ce'st la vie)."

"I did appreciate the apology and thought s**t yeah maybe this was the chance growth and recognition from him...To stand there now. Two years on and blame his multiple shameful performances on an edit?"

"If it was hugely edited then why did I feel so embarrassed and humiliated? Why did other men on the show seem to have quite the issue with him? And members of the crew?"

"Women are not collateral damage for the male ego. We know it’s been a culture of learned entitlement… which we can unlearn!"

Angie also shared a video about Jess' behaviour on the show.

2. Oh. It looks like Chris from MAFS already has a new girlfriend.

After walking out of MAFS on Monday night, it seems Chris Jensen has already found himself a new girlfriend.

A member of the So Dramatic! podcast's "Drama Army" spotted Chris at the Gold Coast airport on Monday night with a mystery blonde woman who's definitely not his on-screen wife, Jaimie Gardner. The photos were later shared on the podcast's Instagram page.

"The Drama Army member, who spotted him sent in these cute pics of them holding hands, also said she overheard him tell her he loved her!" the caption read.

"The onlooker said: 'She got off my flight from Melbourne and he greeted her at the airport and when they were walking in front of me, he asked her if she loved him and she said yes and nodded'."

And just in case there was any doubt that it's Chris in the photo, So Dramatic! host Megan Pustetto confirmed the tattoos match up with Chris'.

So there we have it, another MAFS relationship down the drain.

On Wednesday morning, Buddy shared the exciting news on Instagram.

"Our Baby boy has arrived," he captioned the photo of him holding his newborn son.

Jesinta reposted her husband's photo on her own Instagram story and wrote, "We are filled with so much love and can't wait to start this next adventure as a family of four."

In February 2020, the couple welcomed their first daughter, Tallulah. They are yet to reveal their son's name.

4. Bachelorette Elly Miles has just made it 'official' with her NRL boyfriend.

One month after The Bachelorette finale, Elly Miles announced her split from winner Frazer Neate. And now, three months on, it looks like Elly has a new man.

According to the online publication The Wash, the 26-year-old is currently dating retired NRL player Sandor Earl.

The publication noted that the couple met through mutual friends at their gym, Air Locker Newcastle, and have been "inseparable" since.

While Elly nor Sandor have confirmed the dating news, they have been spotted at various events together including the Stars of Newcastle fundraiser and a charity golf event.

If Elly's new beau looks familiar, you might recognise him from the footy field. Sandor has played for teams including the Sydney Roosters, Penrith Panthers, Canberra Raiders and the Melbourne Storm.

These days, he's started his own podcast and owns an F45 gym.

5. "I need therapy." The racism scandal that blew up the latest season of The Bachelor US.

The latest season of The Bachelor US didn't even make it through its first episode before the controversy began, and it's been unable to shake it off ever since.

The 2021 season was meant to be groundbreaking in representation, with its first Black bachelor Matt James, and 25 women who identified as women of colour. Instead, the franchise has found itself engulfed in a racism scandal, which has cost it its long-time host, its newly crowned couple and its credibility among fans of colour.

Contestant Rachael Kirkconnell faced allegations of attending a 2018 Old South antebellum-themed party (antebellum means "before a war" and is widely associated with pre-Civil War America in the Deep South, before slavery was outlawed), as well as other unverified claims of racism.

Season 25 (yep, really) isn't streaming anywhere in Australia just yet, but given how far-reaching this has been, we're willing to bet you've heard murmurs or snippets of this drama already. Regardless, we've gone deep for this very comprehensive explainer, because hoy boy, this is a lot. 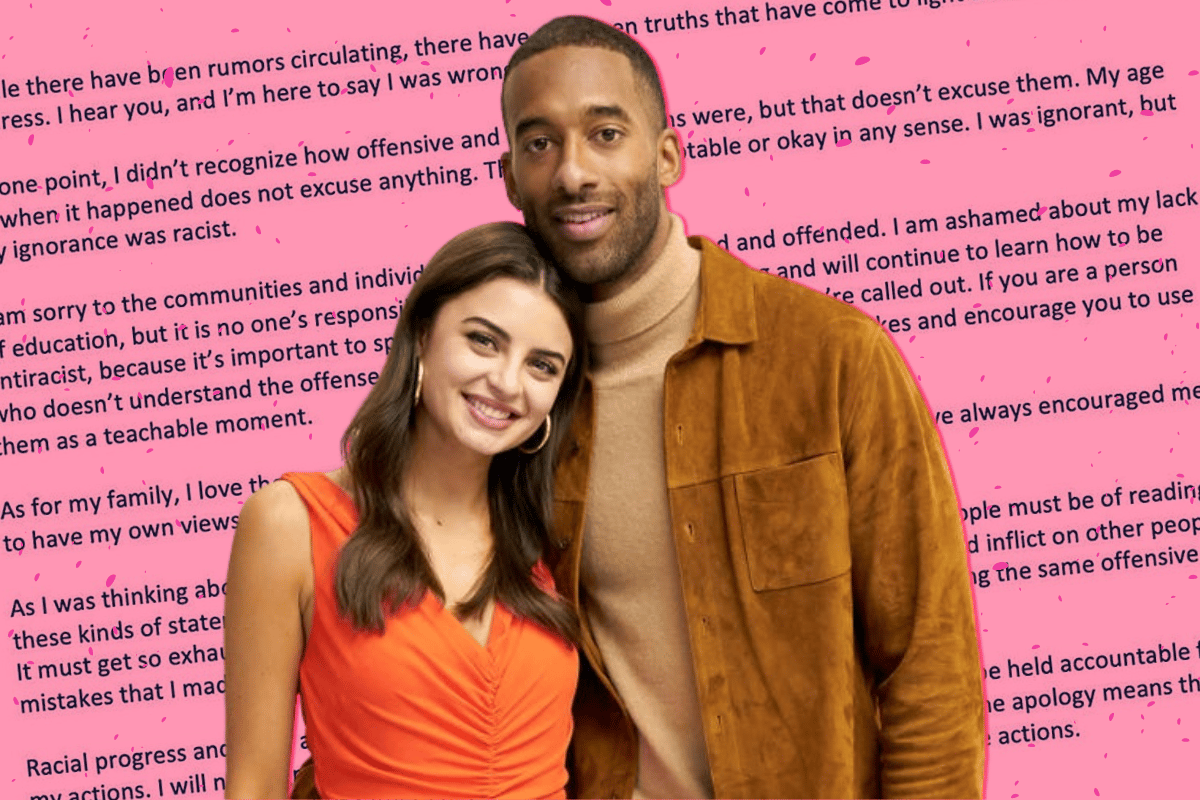 Ok, talk me through what happened.

Back in early January, the season premiered in the US and almost instantly, it was in trouble. Following the first episode on January 4, TikTok user @maddyybierster - who claimed she went to high school with contestant Rachael Kirkconnell - uploaded a video captioned "Girlieee, remember when you bullied me in high school for liking Black guys???"

It went viral and led to her receiving other DMs from people who claimed to have experienced or witnessed racism from Rachael.

There was then intense scrutiny across all of Rachael's social media, with other TikTok users posting receipts that showed cultural appropriation in photos, liking photos of people in MAGA hats and sharing QAnon theories.

For more on the racism scandal that blew up the latest season of The Bachelor US, read our earlier article here.