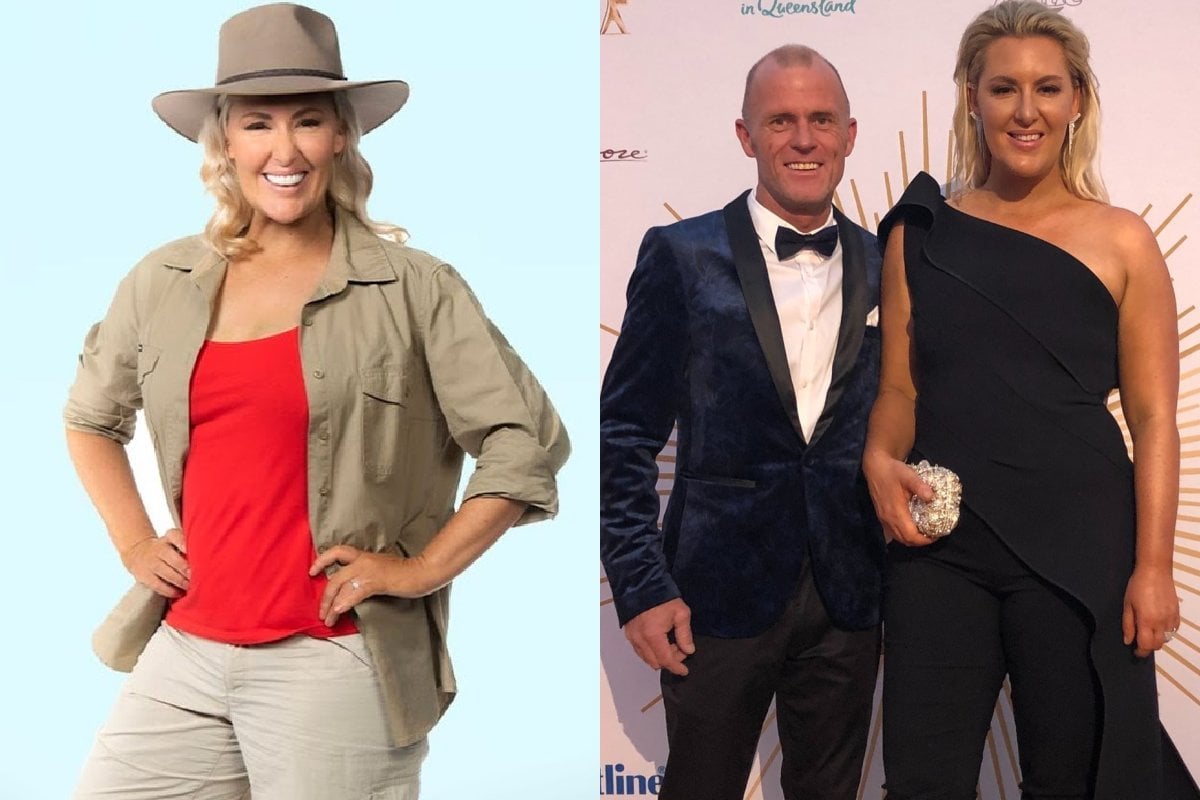 Earlier today, it was announced that Jess Eva had been rushed to hospital after experiencing excruciating ear pain.

Two weeks ago, the I'm A Celeb contestant explained that during her time on the reality show, jungle bugs got into her ears. And now, it's gotten so bad that she's on extreme painkillers.

Watch Jess talk about her postnatal depression on I'm A Celeb. Post continues after video.

This morning, when she didn't appear on Triple M’s Moonman in the Morning (which she co-hosts with Lawrence Mooney), Mooney explained her absence.

"If you’ve been following Jess in the jungle, she was talking about having bugs in her ears and then had those syringed out by a doctor and there was some pupae or larvae in there and fully grown bugs, so she had quite a menagerie in her ears," he shared.

"That situation has become critical, and she is now on morphine because the pain has become insufferable overnight."

"It’s serious when Jess takes a day off," Mooney added. "Jess, you can’t hear us but our thoughts are with you."

"When I was in the jungle my ears started to hurt and I went to the medic a bit and then over time it got worse and worse to the point where I couldn’t sleep, there was so much pain," she said.

"I reckon I lost about 30 to 40 per cent of my hearing on Monday and Tuesday. I could hear ringing and a lot of pressure, so obviously what was in there was already dead, but it was getting worse and worse.

Jess also explained how she thinks they got into her ears in the first place.

"I think I might’ve got it from the pool (in the jungle). There’s a big lake pool that gets a little bit manky sometimes with bugs in it," she added.

Before the jungle, Jess Eva was a normal Aussie girl from rural Victoria.

Until she was 18, Jess never had electricity at home.

"When I was young, we grew up without much money," Jess said during an emotional chat with fellow I'm A Celeb contestant Robert "Dipper" DiPierdomenico.

"People say it’s a bit unusual but for me, it’s just normal. I grew up without electricity until I was about 18."

As money was tight, Jess sacrificed things like going on school camps and to her school formal. But it was during this time that she became good at the sport, lawn bowls.

"Bowls sort of taught me to try your best and do well," she said.

After school, Jess worked for a radio station, where she would sell advertising and have to put a demo on the boss' desk every day while asking for a shot to be on-air.

"I remember the boss said to me, 'I just don’t think you’ve got it,'" Jess told Dipper.

"I wasn’t going to take no for an answer, so I hustled around and got a breakfast radio job in Bendigo and when I was there a girl had a job in the Maldives… so I went to the Maldives," she said. "I couldn’t believe it!"

After that, Jess's life got a little crazy.

"Then a few things happened there," Jess continued. "Got engaged to the bloke, broke up with him, went to India, volunteered in an orphanage, got bitten by a monkey in India so I had to come home and he had a breakfast show for me in Cairns. That’s where I met Norm [her now-husband]."

Jess and Norm have been together for 10 years now. They have two children, Fred, six, and Matilda, two.

While appearing on I'm A Celeb, Jess explained that after her first son, Fred, she suffered postnatal depression for 12 months.

During a conversation with Abbie Chatfield, Jess was asked whether she was on nappy duties.

"Yeah, it was awful. Really bad. But I’m glad I got out of it. Some women never get out of it," she continued.

"I know that I was in a spot where I left Fred in his cot by himself and I rang Norm and I said, 'I’m out of here'. That’s how quick it can happen," she said. "Like I’m full of beans, but at that time I definitely wasn’t."

In 2018, Jess and Norm competed on The Block; a show which literally changed their life.

"That was the moment that our life changed," Jess told Dipper on I'm A Celeb. "It was amazing how, if one person believes in you [it] starts this ripple effect."

"The first thing we bought was two above-ground pools and we handed them out to our friends like lollies," she said on her radio show.

"We just had friends who had been wanting a pool for ages. The above-ground pool salesman would have thought we were loony!

Jess also explained that she and Norm put thousands of dollars towards the tennis.

"Remember when Ash Barty was starting out on the tennis circuit, and we didn't know she was going to be a winner and she was playing against Maria Sharapova?" Jess asked.

"We put thousands on Maria Sharapova, and it was just when Ash Barty was starting her winning streak, and I just forgot that Maria was just coming back from her drugs ban... I'll never forget Norm's look after Maria lost the second set, he just had tears in his eyes."

Other things they spent the money on was paying off a friend's car loan, paying a Facebook friend's rent, buying two lawnmowers and a block of land on Russell Island, Queensland.

But despite spending all their winnings, Jess is grateful that the experience on The Block led to her current radio gig on Triple M and her next reality TV appearance.

"I'd been working in radio for years, just begging for someone to believe in me... Someone believed in us, then it just started this ripple effect of The Block then Triple M in Sydney," she told Dipper.

Now, the reality TV star has a book coming out next month.

While Jess is now a well loved reality TV star, she's just grateful that she can support her family.

"It’s really nice to be able to go, sure son - there you go," she said on the show. "I just feel so proud when I can pay for those things without even thinking about it anymore."

P
pollyanna a year ago

Reply
Upvote
I’m sorry to hear that she is suffering with pain in her ears from bugs and goodness knows whatever other mangy things that may have crept in her ears whilst in the jungle. Perhaps it’s time the show revised certain conditions and challenges on the show. Toni Peron suffered shocking snake bites whilst the shows producers had the hosts and all the crew stand back and watch, encouraging the hosts to give a running commentary on it, but in an entertaining type of way. Disgraceful. As for Jess being a celebrity, please, most of us saw her on The Block, found her sense of humour to be quite crass and exhibitionist. Yet it led to a higher paid job for her, doing what she enjoys, so kudos to her. Given the large amount of money won from being on The Block, it’s nice that they helped a few people out, but what a shame they willingly gambled away the rest on betting via the tennis. When on The Block, all we heard about was how poor they were & that they desperately wanted to win $10K so they could finally do IVF for baby no.3. It seems gambling on tennis was more favourable than gambling on the hope of another child to love. Each to their own. Let’s hope she isn’t on any other alleged celebrity based programs
News
General
Opinion
True Crime
Politics
Sport
Explainer
Entertainment
Celebrity
Reality TV
Movies
TV
Books
Rogue
Royal
Lifestyle
Beauty
Fashion
Weddings
Home
Wellness
Health
Fitness
Travel
Food
Parents
Before The Bump
Pregnancy
Baby
Kids
Teens
School
Parent Opinion
Work & Money
Money
Finance
Career
Lady Startup
Relationships
Sex
Dating
Separation
Friendship
Family
Real Life
Couples