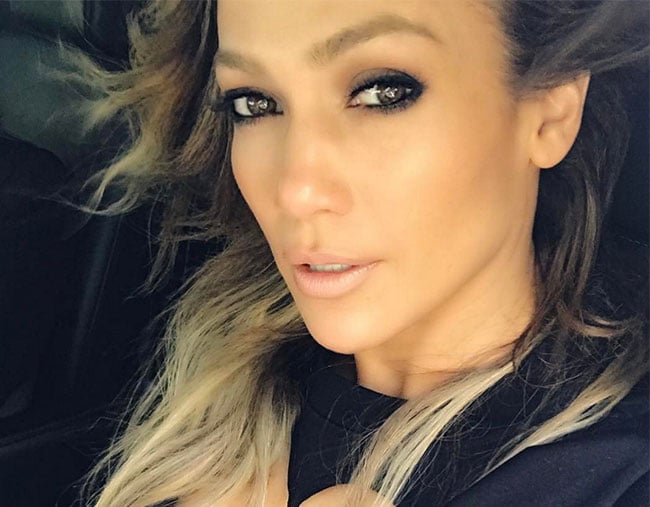 On Friday, Jennifer Lopez strutted down the Versace Spring-Summer 2020 runway at Milan Fashion Week in an updated version of that dress.

You know the one. The low-cut, green jungle-print number that broke the internet after she wore it to the Grammys in the year 2000.

The one so iconic it was solely responsible for the creation of Google Images.

As she catwalked in the updated version, looking - if it's even humanly possible - better than she did in the original, the crowd were whooping. Anna Wintour herself was upstanding, beaming. It was a moment.

JLo had melted the internet again.

Only this time, she wasn't 31 years of age. She was 50. FIFTY. And it was all anyone wanted to talk about.

Nothing has done more for my desire to go to the gym than seeing Jennifer Lopez at 50. https://t.co/6G0gCErv1b

The new 50 thanks to @JLo pic.twitter.com/wJNwH7ubrB

How does Jennifer Lopez look better at 50 than she did at 25? The dress, then and now. Images: Getty

In a recent interview with Vogue, Lopez acknowledged the impact the dress had on her career the first time around.

"The dress was just provocative enough to make people interested,” she said. “That was a moment that captured people’s imaginations, I think... in terms of my career, this dress really marked a moment in time. Even if you don’t know my music and you don’t know my movies, people know about that moment and that dress. That was it."

But what about now? 19 years later, it'd be hard to find a human being alive who doesn't know JLo's music, who hasn't seen at least one of her movies. She's a triple threat (have you seen her dance?!) who has been dominating the entertainment industry for decades.

Currently critics are raving about her performance in Hustlers, in which she plays Ramona, the ringleader of a gang of strippers who set out to rob their rich clients. The Oscar buzz is loud.

She's at the pinnacle of a diverse career spanning three decades.

And yet, it is her apparent ability to defy the ageing process that we seem to celebrate the most.

Lopez is open about the work involved in looking as youthful as she does. She doesn't drink or smoke or consume caffeine. She exercises daily and has personal trainers positioned in both New York and LA to ensure she never misses a work out.

Her strength, determination and work ethic are admirable. (And her genetics and her bank balance probably help.)

But in a society that already places so much pressure on women to look good, to defy the natural process of ageing, we're coming worryingly close to believing this is what 50 really looks like; that JLo is the rule and not the exception.

By celebrating her 'hot body' more vehemently than any of her other achievements, by deeming it her highest accolade, we're buying into this toxic narrative about women and ageing.

A narrative that says, if we don't look 30 when we're 50, we have failed. That if we can't slip into a dress we wore almost 20 years earlier and look better than we used to, we're doing it wrong.

It's not JLo's fault - she didn't write the narrative - and she deserves all the credit she gets.

The sad reality is, if she actually looked 50, she might not be getting it.

She's literally just done a movie about hot bodies, so I don't think she would mind too much. She has a career because of that body, she wouldn't have been able to do what she's done without it.

You say that if she actually looked 50 she might not be getting the credit but what does 50 actually look like nowadays? I certainly look better now at 49 than I ever did my whole life because I want to defy what a 50 year is supposed to look like and I make the time to look after myself. Let's not assume that 50 year olds are supposed to look old anymore!