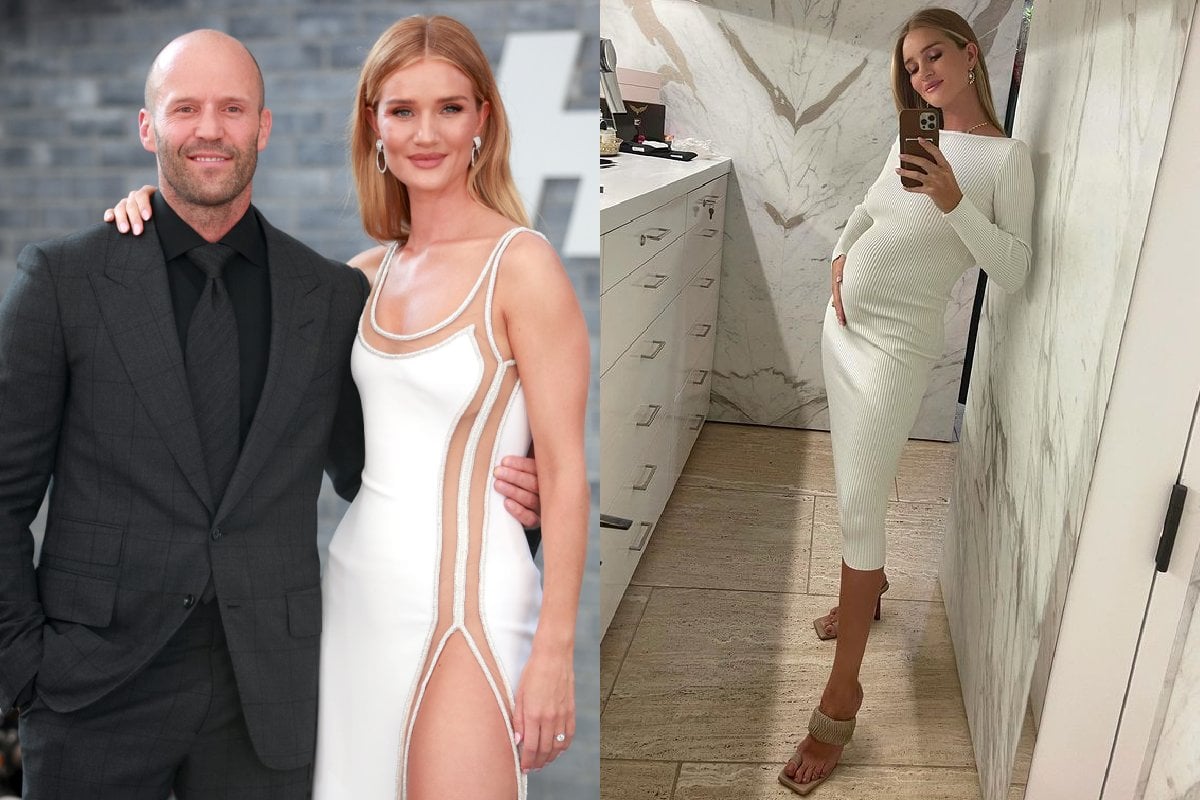 Rosie Huntington-Whiteley and Jason Statham might just be one of Hollywood's most genetic-blessed couples.

The English actor, 54, and model, 34, have been together for 11 years, engaged for five and share a son. And just this week, the couple announced they are expecting baby number two.

"Taaa daahhh!! #round2," Huntington-Whiteley wrote on Instagram, sharing a series of mirror selfies with the final photo showing off her baby bump.

Despite both being public figures, Huntington-Whiteley and Statham keep their relationship and family rather quiet from the public eye.

Rosie Huntington-Whiteley and Jason Statham first met and fell in love while filming the third instalment of the Transformers films, Transformers: Dark of the Moon in 2010.

But the couple made their official red carpet debut in 2011. 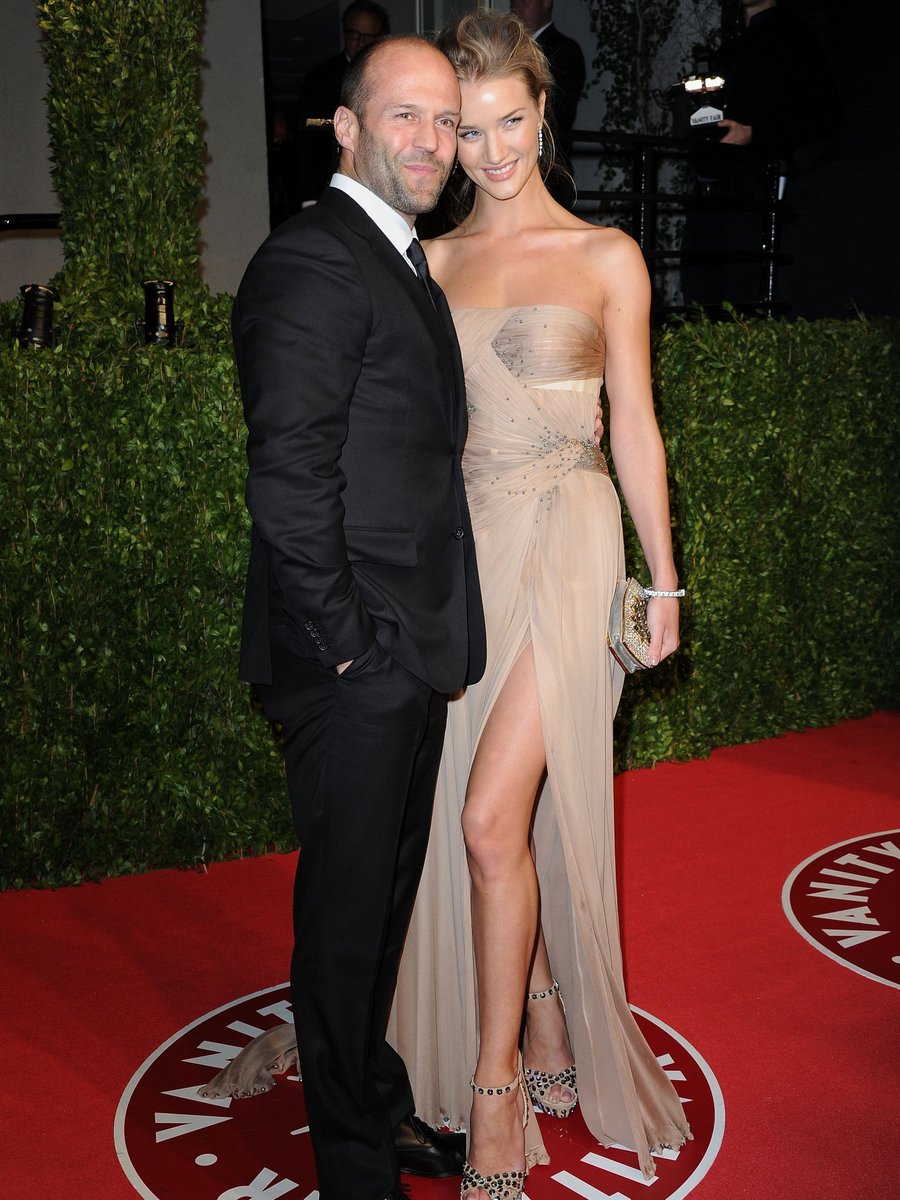 Two years after they began dating, Huntington-Whiteley shared that she was ready to settle down.

"I always see myself working, but definitely being a mum will be a big part of me," she told Elle UK. "Look, I think my career is very self-indulgent. It's all about me... So it is very self-involved."

"I think there is naturally a point where you think, 'I don't care about myself as number one anymore. I want to care about other things,'" she added.

In 2015, after five years together, the model and actress explained that while the public assumes marriage is the natural next step for their relationship, she wasn't in any rush.

"For any couple that’s been together for a certain amount of time, there’s a massive amount of pressure to get married," she told Self. "I totally believe in marriage, but being in a happy relationship is much more important to me… [Kids are] something that’s more realistic in the near future."

Neither Statham nor Huntington-Whiteley announced their engagement. Instead, the couple shared the news by showcasing the engagement ring at the 2016 Golden Globe Awards. 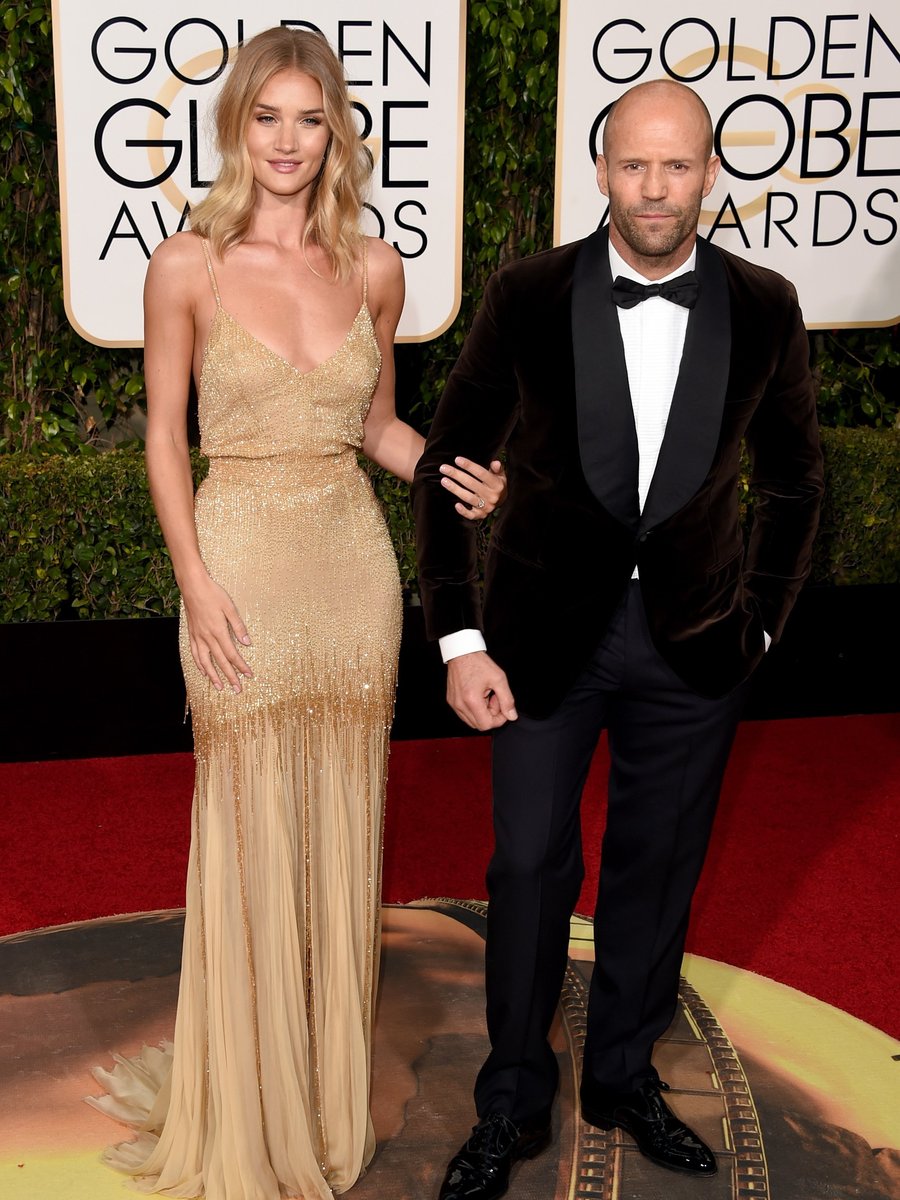 The engaged couple at the 2016 Golden Globe Awards. Image: Getty.

The following year, Huntington-Whiteley announced she was pregnant with their first child.

"Very happy to share that Jason and I are expecting!! Lots of love Rosie x," she wrote.

Five years after their engagement, the couple still hasn't gotten married. But as Huntington-Whiteley told Extra in 2018, it's not a huge priority for them.

"I think the time will come," she said. "We’ve been so focused on our work for so long, and Jack came along. We definitely talk about it, we’re looking forward to that time, it’s also not a huge priority for us, we’re so happy."

"I think it will be fun to do it when the baby’s grown up a bit and he can be involved in the wedding," she added.

Despite being well-known figures, Huntington-Whiteley insists their life is pretty damn normal.

"We just kind of get on with things. We're pretty normal — we're not leaving restaurants separately. People want to live on camera 24/7 but that's not us," she told Elle.

And while they both have busy careers, they make family life and raising their son a priority.

"I needed to be with my family. And it's the same with Jason; there's a lot more communication about where we're going to be and how we're going to make things work. Both of us can't just take off like we have in the past," she said.

"He [Statham] is very happy to get up at five in the morning and do daddy duty and let me sleep an extra hour… he's very hands-on, he's a brilliant dad, I am very lucky, he's a great partner," Huntington-Whiteley told Extra.

While Huntington-Whiteley has shown off happy snaps of motherhood, she has noted that becoming a mum was quite overwhelming.

"Though I really felt ready to have a baby, it still pulls the rug out from underneath you. I am obsessed by him. I’ve never been more in love in my whole life; it blows everything else out of the water. But it’s just so overwhelming," the model told Harper's Bazaar.

"It encompasses every single emotion I feel you could have as a human being and at such a heightened level. I don’t think I’ve been depressed at all, but there's definitely have been periods over the past 18 months when things are great and you think you’re on top of it, then maybe when there’s a lot on the schedule and it’s overwhelming... that can cause anxiety, you know."

She also struggled with her body changes.

"It was a struggle for me, if I can be really candid. I gained a lot of weight; a lot more than people around me expected. I do not regret it – but I had a long way to go once I was cradling this baby. You give birth and then, after a certain amount of time, you look in the mirror and you’re like, 'Right, I’ve got to get back. I’ve got to get back to me.' It took a year of training and discipline," she said.

These days, Huntington-Whiteley and Statham live in Los Angeles, California, and their son Jack is now four.

The couple also recently bought a home in Chelsea, London.