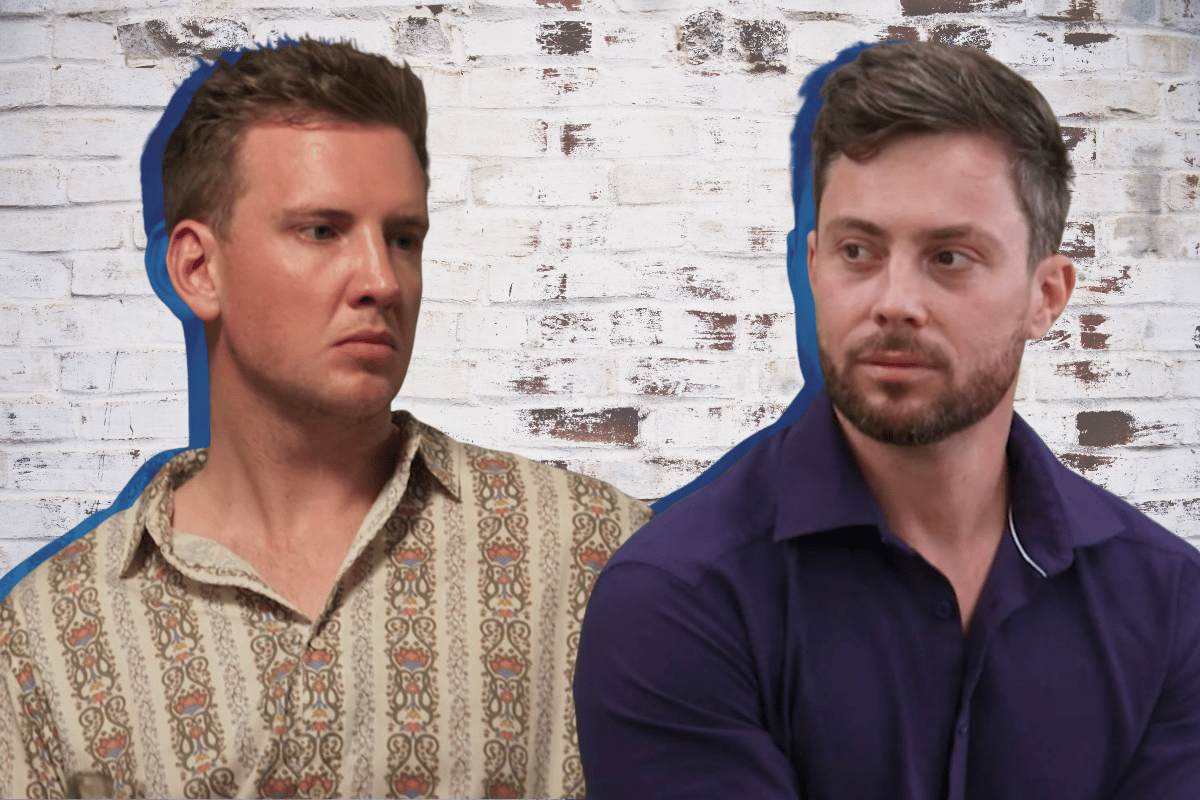 1. An un-aired MAFS scene shows Jason saying how he really feels about Liam.

MAFS might have wrapped up for another season, but the drama is far from over.

And once again it involves Jason Engler, who has been heard sharing how he really feels about fellow groom Liam Cooper in an un-aired video.

In the clip, which was obtained by the Daily Mail, Jason tells the camera that he "doesn't care" about Liam's feelings following that viral video where he called him "ugly", "fat" and a "full-blown homosexual".

When asked by a producer if he knew why Liam ignored him at the reunion dinner party, Jason says in the clip, "I have absolutely no idea. I haven't spoken to Liam at all since [ending the experiment]".

The producer later told Jason that Liam was upset when he saw the original video.

Listen to The Spill, Mamamia's daily entertainment podcast. In this episode, Laura Brodnik and Keryn Donnelly chat about the double-standard around Zac Efron and his relationship. Post continues below.

2. GOOD NEWS: Michael is coming back for season 2 of Love On The Spectrum.

Michael is returning for season two of Love On The Spectrum, and this is quite possibly the best news we've heard all day.

Fans of the show will know that Michael quickly became a fan favourite last season, which was originally released on ABC in 2019 before it was later picked up by Netflix.

And now he's back on the show continuing his "quest for true love".

"I just can't bare the thought of being single my entire like because it's lonely, it’s boring, and it’s also unfulfilling and it makes you feel like you lack a purpose," Michael said in the trailer.

"I can’t see myself without a wife," he added. "There’s no other way for me."

Speaking on Mamamia's No Filter podcast last year, Michael explained his ideal partner would be "someone who comes from a good family, with old school values, has a good heart, not going around doing the wrong thing".

"Someone who is hardworking, takes their responsibility seriously. And someone who is very intelligent because intelligence is a quality that I’m very attracted to in women," he added.

Michael will be joined by familiar faces Mark and couple Jimmy and Sharnae from last season, as well as a bunch of new singles.

Here's hoping they all find what they're looking for when season two airs on Tuesday 18 May at 8.30pm on ABC TV and ABC iview.

3. Dakota Johnson has released a sex toy, that apparently is ‘in her purse’ at all times.

Not that long ago, celebrities were spruiking their own skincare and makeup products. But now, they're onto sex toys.

"It's an all-body massager that can be used to stimulate all erogenous zones - with a partner or solo," the 31-year-old wrote on Instagram.

"Its versatility as an intimate massager, and everywhere body massager, is absolutely epic. Not to mention it is travel size, discrete and legit. TSA won't even bat an eyelash."

Johnson also shared where she keeps it.

She added: "Do I keep it in my purse? Yes. Yes I do. Thank you and goodnight."

4. Is Hilary Duff gonna star in a new spin-off series titled, How I Met Your Father?

Younger fans, Hilary Duff won't be gone from your screen for long.

On Wednesday, the streaming service, Hulu, announced that Duff will play the lead on the How I Met Your Mother spin-off series, How I Met Your Father.

The show will be created by How I Met Your Mother creators, Carter Bays and Craig Thomas, and the people behind This is Us, Isaac Aptaker and Elizabeth Berger. Duff will produce the show and star in the title role, Sophie, the new Ted Mosby.

The show already has a straight-to-series order for 10 episodes at Hulu.

"In the near future, Sophie is telling her son the story of how she met his father: a story that catapults us back to the year 2021 where Sophie and her close-knit group of friends are in the midst of figuring out who they are, what they want out of life, and how to fall in love in the age of dating apps and limitless options," the statement from Hulu read.

This will be Duff's first TV role after six seasons of Younger.

"I've been incredibly lucky in my career to play some wonderful characters and I'm looking forward to taking on the role of Sophie," she said on her Instagram Story today.

"As a huge fan of How I Met Your Mother, I'm honoured and even a little nervous that Carter and Craig would trust me with the sequel of their baby. Isaac and Elizabeth are brilliant, and I can't wait to work alongside them and all of their genius. Just fangirling over here getting to join the Hulu Originals and 20th Century families. I realise these are big shoes to fill and I'm excited to slip my 6 ½'s in there!"

Dust off your aprons and get ready to question everything you know about cooking, because MasterChef Australia is back.

And after a bunch of fake weddings and secret girlfriend drama, this is exactly the wholesome content we need in our lives right now.

The new season, which kicked off on Monday night, sees 24 contestants battle it out for the MasterChef title (and the sweet $250,000 prize money).

Melissa Leong, Jock Zonfrillo and Andy Allen will also be back on the judging panel. And they'll be joined by a bunch of guest judges including Nigella Lawson, Yotam Ottolenghi and Heston Blumenthal.

Here's everything we know about the MasterChef Australia 2021 contestants and (more importantly) where to follow them on Instagram.

Therese is part Taiwanese, part Burmese and part Chinese, and already seems like one to watch.

Despite only cooking for one year, she's already impressing the judges in the first episode with her mystical mushroom dessert.

"It makes me so happy when I cook," she explained.

"It just transports me to Willy Wonka’s Wonderland. When it comes to desserts, I am self-taught. I do weird and whacky desserts, that’s something that I love to do."