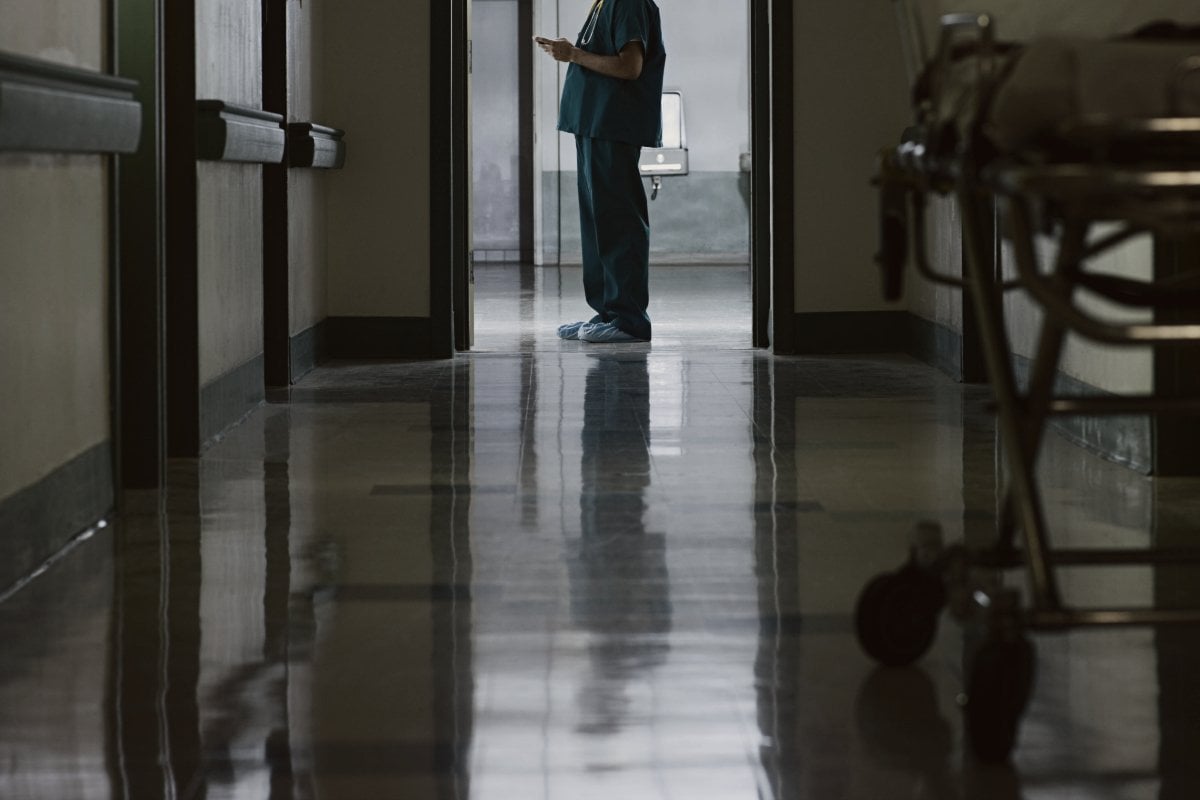 The following article deals with child sex abuse, which may be distressing for some readers.

In May 2019, a young woman named Alice* walked into the police station in Launceston, Tasmania.

She disclosed that, between the ages of 11 and 14, she had been groomed and repeatedly sexually assaulted by a local man named James Geoffrey Griffin — a popular nurse who worked on Ward 4K, the pediatric unit at Launceston General Hospital.

Alice's brave act rippled through the small community, empowering four other women to come forward with allegations of sexual abuse spanning the late 1980s to 2012.

But as investigative journalist Camille Bianchi has uncovered on her podcast, The Nurse, dozens more had their own stories to tell.

James 'Jim' Griffin came to nursing later in life. After years as a volunteer ambulance officer, he enrolled at university in his late forties and worked as a registered nurse on a cruise ship, at a detention centre and on Ward K.

Speaking to Mamamia's True Crime Conversations podcast, Bianchi said colleagues told her that Griffin made himself indispensable, that he was charismatic and the 'life of the party'.

They claimed he gave children leg and back rubs, that he'd take photographs with them, handle them naked without supervision, and appeared angry when a parent insisted on spending the night in their child's room.

With the benefit of hindsight, it appears these behaviours were symptomatic of Griffin's campaign of abuse, which he allegedly waged at the hospital and elsewhere in the community over several decades.

Survivors who've spoken to Bianchi have revealed a pattern of compliments, lingering hugs, and physical affection.

"For teenage girls, I think particularly younger teenage [girls]," she said, "you might not be the centre of attention all the time, you might feel like, 'I kind of feel a bit special'."

In some cases, he built trust over several years, often both with the child and their parents, before any molestation took place.

"He groomed whole families," Bianchi said. "He didn't raise alarm bells with a lot of people because he was a family man, he was a volunteer, he was a nurse, which has a high standing in the community.

"He would provide all these treats to kids that their parents might not have been able to afford, in many cases."

Listen to Part 1 of Mamamia's interview with Camille Bianchi. (Post continues after podcast.)

He admitted during a police interview to "criminal sexual misconduct" against her, and he was charged in September 2019 with multiple offences relating to the sexual abuse of a child.

By the following month, the four other complaints mounted.

"I know to be true that all other of the very brave women — the four others — chose to come forward because of [Alice]," Bianchi said. "They heard, and they went, 'You know what? Someone else will believe me'."

A search of Griffin's home and electronic devices uncovered indecent images of children, including a young relative, the child of one of Griffin's colleagues and others who appeared to be pediatric patients.

Police also uncovered posts on an online chat forum, in which he allegedly boasted about sedating and abusing children.

Facing further offences against children as young as 11, James Griffin took his own life at home on October 13, 2019, robbing his survivors of their chance for justice.

In the process of making The Nurse, Bianchi has been informed of "28 to 30" personal, verifiable abuses by James Griffin.

It's possible there are more.

She said some cases she has learned about involved people who have since passed away from the illness that landed them in Griffin's care.

"The hospital was their second home," Bianchi said, "and one mum put it to me really well. She said, 'We weren't on the lookout, we weren't looking for red flags; we were looking after our dying daughter. That was our focus. It didn't enter our minds that she wasn't safe there'."

While Griffin is entirely to blame for his actions, Bianchi's investigation for The Nurse has raised questions about the institutional response to various complaints levelled against him.

"There was receipt of a complaint, formally, before Jim was granted his Working With Children card in 2016. Let's not even go into how he was on the ward without vulnerable-people accreditation for 15 years," she said.

These questions are now being probed by the Tasmanian Government.

9 days after my podcast the Nurse dropped, a formal #taspol investigation has been announced into the coverup of pedophile nurse James Griffin
More to come on the podcast. Thank you sources, thank you listeners.

"We need assurance that the safeguards we have in place today are the best they can be for our health system, and we are committed to ensuring that the policies, practices and procedures utilised by the Tasmanian Heath Service now operate in a way that minimises the risk of child sexual abuse," he said in a statement to media.

"We have clearly seen a failure if we have seen these types of allegations happen here in Tasmania," she said.

"As Minister for Health, I absolutely apologise to any victim both now and in the past."

It was welcome news for Bianchi.

"I'm cautiously optimistic that the independent investigation announced by the Tasmanian Government will do its job," she said. "We have to at least be optimistic, but we also have to hold it to account."