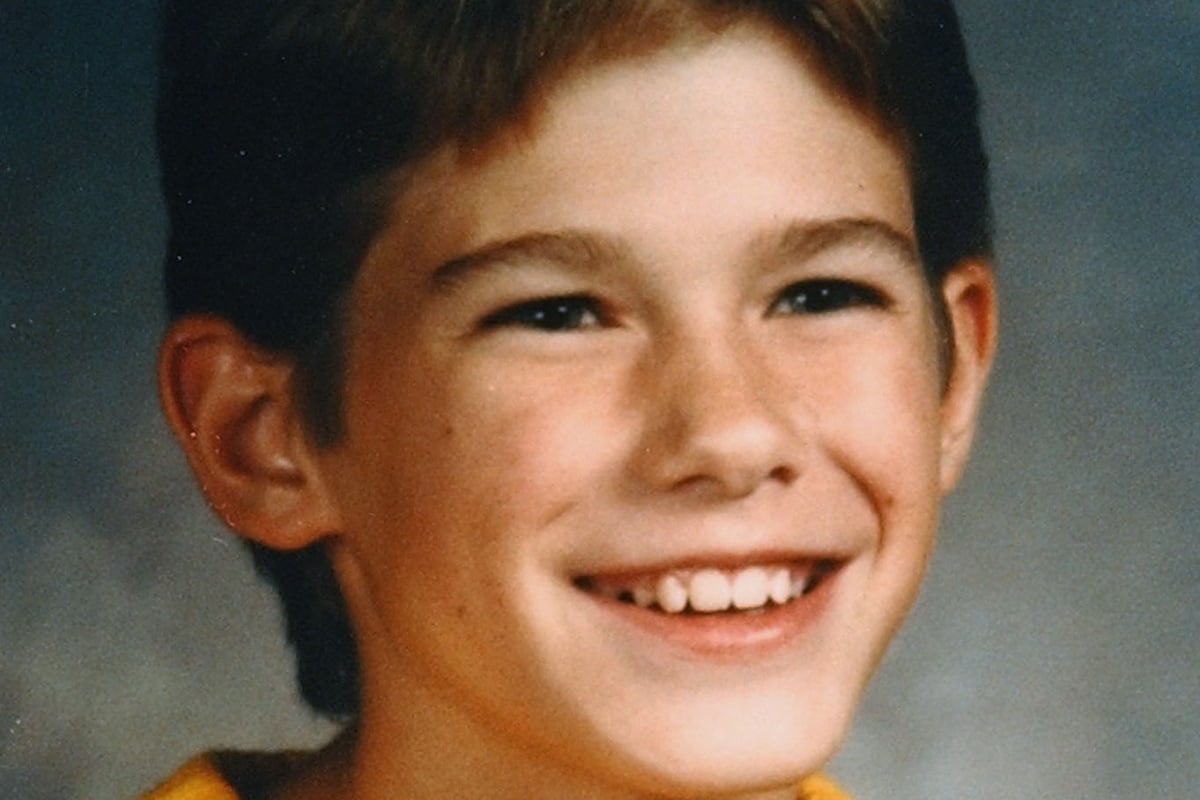 Jacob Wetterling was 11 years old when he was abducted while riding his bike, just two blocks from his home.

It was the evening of October 22, 1989. Jacob had been left at home with his two younger siblings, Trevor and Carmen, and a friend, Aaron Larson, while his parents were at a dinner party.

"We weren't going to be gone very long, and they were just going to stay home," his mum Patty later explained to CNN.

The three boys wanted to ride their bikes to a convenience store to rent a video, so they rang Patty. She said no, because it was dark, and it would be too dangerous. So the boys rang Jacob’s dad Jerry, promising that Jacob would wear a reflective vest and Trevor would carry a torch, and they would get a 14-year-old neighbour to come around and babysit Carmen.

The store was not much more than a kilometre away from where the boys lived in the small town of St Joseph, Minnesota. Before long they were on their way home with the video Naked Gun. But as they rode down a dark stretch of road, a man with a handgun, wearing a mask, leapt out in front of them.

He told the boys to get off their bikes and lie face down on the road. He asked their ages, then told Trevor to run into the woods, warning him not to look back or he would shoot him. He told Jacob and Aaron to turn around so he could see their faces. Then he told Aaron to run into the woods, again warning that if he would shoot him if he looked back.

The man grabbed Jacob’s arm and dragged him away.

Trevor and Aaron ran back to the Wetterling house. The neighbour’s dad immediately called Patty and Jerry, as well as the police. It took the police just six minutes to get to the spot where Jacob had been abducted. A search began immediately, involving a helicopter as well as officers on foot.

"Everybody thought that within a few hours we would get it taken care of," Stearns County Sheriff John Sanner said.

But they didn’t. There was no sign of Jacob. FBI agents and National Guard troops joined the search. Nothing.

The townspeople formed the Friends of Jacob Wetterling Centre. They donated money for a reward fund. When there was a call for volunteers to mail out flyers, more than 1,000 people turned up, from a town with a population of only 4,000.

"You have to get tunnel vision: My kid’s alive, we have to bring him home, and we’ll make it work from there," she said.

Despite thousands of tip-offs, none led to Jacob. Patty and Jerry started up a foundation to promote child safety. They were responsible for the passing of a new law, named after Jacob, that required states to set up registries of sex offenders and people who had committed crimes against children.

Nine years after the abduction, Patty spoke to The New York Times. She said she would still sit on the living room couch in the middle of the night, looking out the window, waiting for Jacob.

"I still, deep in my heart, believe it is possible that he's alive," she said. "Sometimes I look out the window and expect to see him come running up the driveway."

Joy Baker was 22 years old and had just graduated from the University of Minnesota when Jacob was abducted. In 2010, she wrote her first blog post about him.

"I remember the constant media coverage, the white ribbons, the 'missing' posters... and I remember seeing Jacob’s parents on the news, begging for their son’s safe return," she wrote. "My heart broke for them."

Baker explained in the post that she was unable to shake Jacob’s story from her head.

Baker began investigating. There was another boy who had been abducted in Minnesota, just nine months before Jacob and less than 20 kilometres away, in the town of Cold Spring. The boy’s name was Jared Scheierl, and he was 12 at the time. A man had asked him for directions, then pulled him into his vehicle and driven him to a remote spot where he had sexually assaulted him.

The man had let the boy go, but had told him that if he looked back, he would shoot him.

Baker contacted Scheierl. Together they discovered that other boys had been sexually assaulted in the nearby town of Paynesville in the late 1980s. They tracked down the victims and spoke to them. In some of the cases, the man had made a similar threat about shooting them.

The police didn’t think the cases were linked to Jacob’s, but Baker and Scheierl felt differently.

"I think there's a very strong possibility that the cases are linked," Baker told CNN in 2014. "How many psychopathic paedophiles can exist in a 15 to 20-mile radius?"

She even had a name: a man who had been considered as a suspect in Jacob’s abduction, back in 1989, but had been released.

It was only after Baker and Scheierl were featured on a CNN show, The Hunt, that the FBI decided to review Jacob’s case.

In 2015, DNA from Scheierl’s sexual assault was re-tested. It came up with a match: Danny Heinrich. Heinrich couldn’t be charged with Scheierl’s assault, because the statute of limitations had expired, but when police searched his house, they found a stash of child pornography – enough to send him to jail for a long time.

As part of a plea deal, Heinrich agreed to confess to Jacob’s murder and to lead police to his remains. Those remains were found on a farm near Paynesville in 2016.

Heinrich told police that he had abducted Jacob and sexually assaulted him. When Jacob asked, "What did I do wrong?" he shot him and buried his body.

Patty had to finally accept that her son wouldn’t be coming home. At a press conference, she apologised to him.

"I want to say to Jacob, I’m so sorry. It’s incredibly painful to know his last days, his last hours, his last minutes. We love you Jacob, we will continue to fight. Our hearts are hurting."

Despite her grief, Patty wanted to thank the two people who were responsible for the case finally being solved.

"I want to say one shout-out to Jared and Joy. Jared had the courage to stand up and say, 'This happened to me, and there are others.’ And they found the others.'"