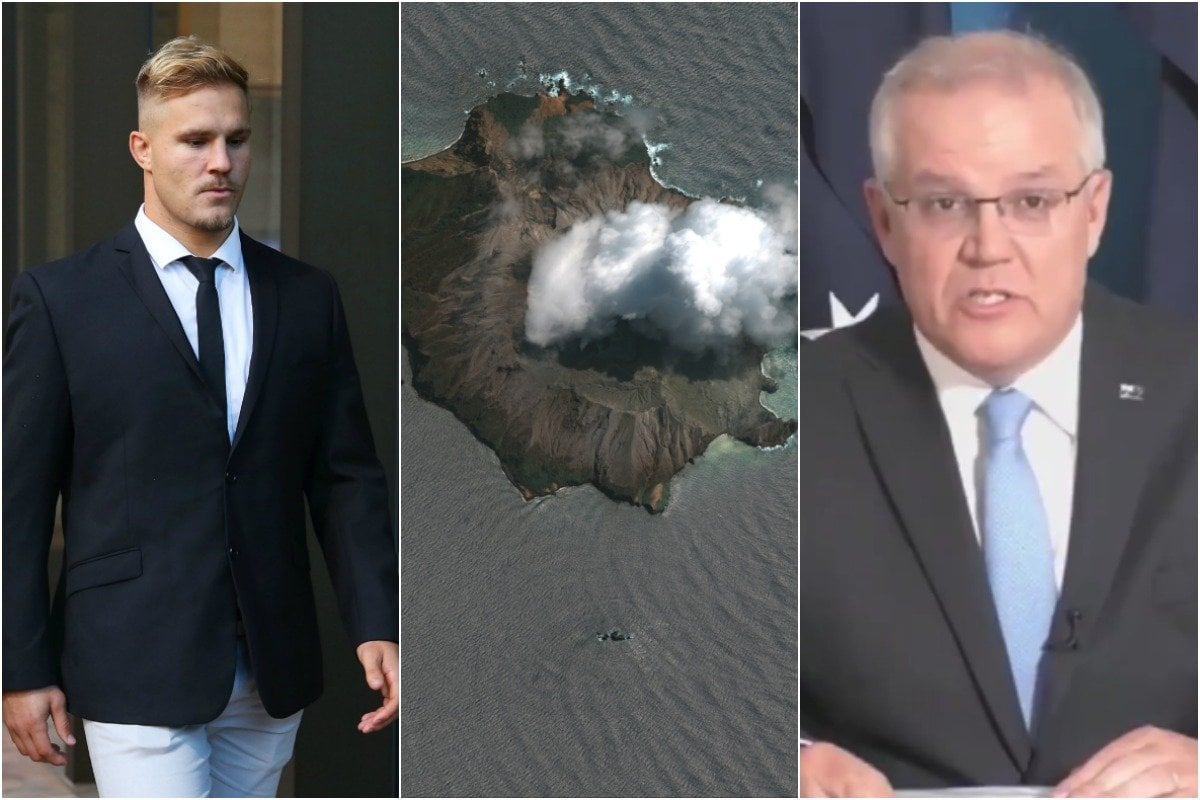 NRL star Jack de Belin and his friend Callan Sinclair remain accused of sexual assault after a jury was unable to reach any verdict and discharged.

The NSW State of Origin representative, 29, and Sinclair, 23, pleaded not guilty to raping a woman, then 19, in a North Wollongong unit in the early hours of December 9, 2018.

Following a three-and-a-half week trial and nearly two days of deliberations, the Wollongong District Court jury was unable to reach a unanimous decision on any of the five charges against each man.

The rape trial of sidelined @NRL star Jack de Belin has been called off with the jury discharged. After hours of deliberations, jurors told the court that they couldn't reach a unanimous or majority verdict, meaning a potential re-trial. #7NEWS pic.twitter.com/WQJ9fWDGrx

Judge Andrew Haesler then gave the jury the option to return a "majority verdict" whereby 11 out of 12 jurors could be in agreement.

But minutes after considering this option the jury returned once again.

When the jury foreperson was asked if given more time there was a chance of a majority verdict the woman answered: "Absolutely not".

Judge Haesler said he would do everything in his power to ensure a "rapid retrial" of the men who were seen shaking and hanging their heads in the dock.

Outside the court Sinclair's lawyer Graeme Morrison said they were "really disappointed in what happened today," and they would be "back to fight these charges".

Read: Jarryd Hayne, Jack de Belin and the sports players who never learned how to have sex.

Thirteen parties have been charged over the deaths of 22 people during a volcanic eruption on a New Zealand island in 2019.

The charges by New Zealand's workplace safety watchdog follow a major probe into the eruption of the Whakaari volcano.

The blast, which claimed 14 Australian lives, happened as tours to White Island were taking place and despite warnings of a heightened risk of eruption.

"This deeply tragic event was unexpected. That does not mean it was unforeseeable," WorkSafe NZ chief executive Phil Parkes said.

"There were 47 people on the island at the time of the eruption, all of whom suffered serious injuries and trauma."

A number of organisations have revealed they are among those charged, including government bodies GNS Science and the National Emergency Management Agency.

GNS Science said it had yet to learn of the nature of the charges but "stand by our people and our science - which we will continue to deliver for the benefit of NZ".

Volcanic Air director Tim Barrow told the Rotorua Daily Post it was also one of the organisations charged.

Ten organisations have been charged with breaches under the Health and Safety at Work Act, and could face fines of up to $NZ1.5 million ($A1.4 million).

A further three individuals have been charged as directors or individuals who failed to meet health and safety obligations.

Prime Minister Scott Morrison has demanded China apologise for a "deeply offensive" doctored image of an Australian soldier slitting the throat of an Afghan child.

The image was shared to Twitter - a website blocked on mainland China - by Zhao Lijian, a spokesman with the nation's foreign ministry.

"The Chinese Government should be totally ashamed of this post."

Scott Morrison says Australia is seeking an apology from the Chinese Government after a doctored image of an Australian soldier was posted on Twitter.

"The Chinese government should be totally ashamed of this post. It diminishes them in the world's eyes," he told reporters in Canberra on Monday.

"Australia is seeking an apology from the Ministry of Foreign Affairs, from the Chinese government, for this outrageous post. We are also seeking its removal immediately and have contacted Twitter."

"It is a popular cartoon that condemns the Australian Special Forces's brutal murder of 39 Afghan civilians," he posted on Twitter.

Private security guards are absent from Victoria's new-look hotel quarantine program, which Premier Daniel Andrews describes as the "strongest and safest" scheme in the country.

Mr Andrews on Monday announced a dedicated agency, COVID-19 Quarantine Victoria (CQV), has been established to oversee the program, which restarts on December 7.

It will be led by Corrections Commissioner Emma Cassar, who will report to Police Minister Lisa Neville.

There will be no private security guards involved, with all staff employed or directly contracted by CQV, with the exception of cleaning staff, who are on fixed-term contracts with Alfred Health.

About 300 Victoria Police officers and 220 Australian Defence Force personnel will be embedded in the hotels each day.

All staff involved in the program will be tested daily and will work in "bubbles" to ensure they have contact with a limited number of people during their shift.

Arrivals will initially be capped at 160 travellers a day.

In June, Victoria's hotel quarantine program was suspended and an inquiry was called after security guards and hotel staff at the Rydges on Swanston and Stamford Plaza contracted COVID-19.

It received final submissions on Monday, after a tranche of new statements and phone records were made public on Friday. The inquiry will hand down its final report by December 21.

South Australia has opened its border to Victoria, clearing the way for people to cross the state line without needing to quarantine.

The change comes as SA also reduces some local coronavirus restrictions on Tuesday that were imposed because of the latest cluster of COVID-19 cases in Adelaide which stands at 33 infections.

Queensland's border has also reopened to Victoria and Greater Sydney as of 1am Tuesday with about 6000 people booked to fly into Brisbane airport from the two states today alone.

Travellers from Greater Adelaide are still blocked from entering the Sunshine State.

NSW is ushering in the first day of summer with another stint of hot weather, after a reprieve of only one day.

Inland NSW is set to bear the brunt of the sweltering weather, with authorities particularly worried about the growing risk of grass fires, with temperatures expected to surpass 40C.

Coastal communities will experience temperatures in the low 30s.

#NSWweather: Welcome to summer!!! Some relief from the heat is on the way tomorrow. https://t.co/vqVgOfOTBa pic.twitter.com/KtRDmVFIvH

RFS crews battled more than 60 bush and grass fires across the state on Sunday, and RFS Commissioner Rob Rogers warned Tuesday could also be a tough day for firefighters in inland NSW.

A man has been charged over the death of a woman at a home in Sydney's west.

Police were called to the Fairfield address about midday on Monday following concerns for the woman's welfare.

The 42-year-old woman, believed to be a victim of domestic violence, suffered multiple injuries and died at the scene.

Husband expected to be charged with murder after woman dies in Western Sydney unit https://t.co/87QaZjix3T

A 60-year-old man who knew the woman was arrested at the home and has now been charged with murder.

Yesterday another woman was laid to rest after being murdered in her Melbourne home two weeks ago.

A former colleague has been charged with killing 23-year-old Celeste Manno.

Her mother, who was home at the time of her death, told her funeral on Monday: "I didn't get there in time. I failed you, that's something I'll never forgive myself for."

Read: Her name was Celeste. She is the 45th woman to be killed by violence in Australia in 2020.

A woman has died and two people have been injured during an assault in southeast Melbourne, with police arresting a teenager.

Four people were found with serious injuries, including a woman with critical wounds at a Narre Warren property about 1pm on Monday.

Police in Melbourne are trying to determine what led to a violent attack in the city's south-east, leaving a woman dead and a 3-year-old girl with serious injuries. #9Today pic.twitter.com/geKKnygx4k

A 15-year-old boy with serious injuries was arrested at the scene and taken to hospital under police guard.

Two vaccines available in US 'in weeks'.

People in the US could have access to their first two vaccines against the coronavirus before Christmas, Health Secretary Alex Azar says.

The Food and Drug Administration's outside advisers will meet on December 10 to consider authorising Pfizer Inc's COVID-19 vaccine.

First doses of Pfizer coronavirus vaccine has flown to US from Belgium: report https://t.co/9pcxImU2oh pic.twitter.com/o1PTI75ivl

That vaccine could be approved and shipped within days, with Moderna's following one week behind that, Azar said.

"So we could be seeing both of these vaccines out and getting into people's arms before Christmas," Azar said on CBS.

Azar said the US federal government will ship the vaccines through its normal vaccine distribution system, with state governors determining where they should go first.

- The German suspect in the murder of British girl Madeleine McCann is to be moved to a prison in a different German state, where investigations into his alleged role in sex crimes are proceeding.

- French COVID-19 infections have had their smallest daily rise in months as the country endures a second lockdown.