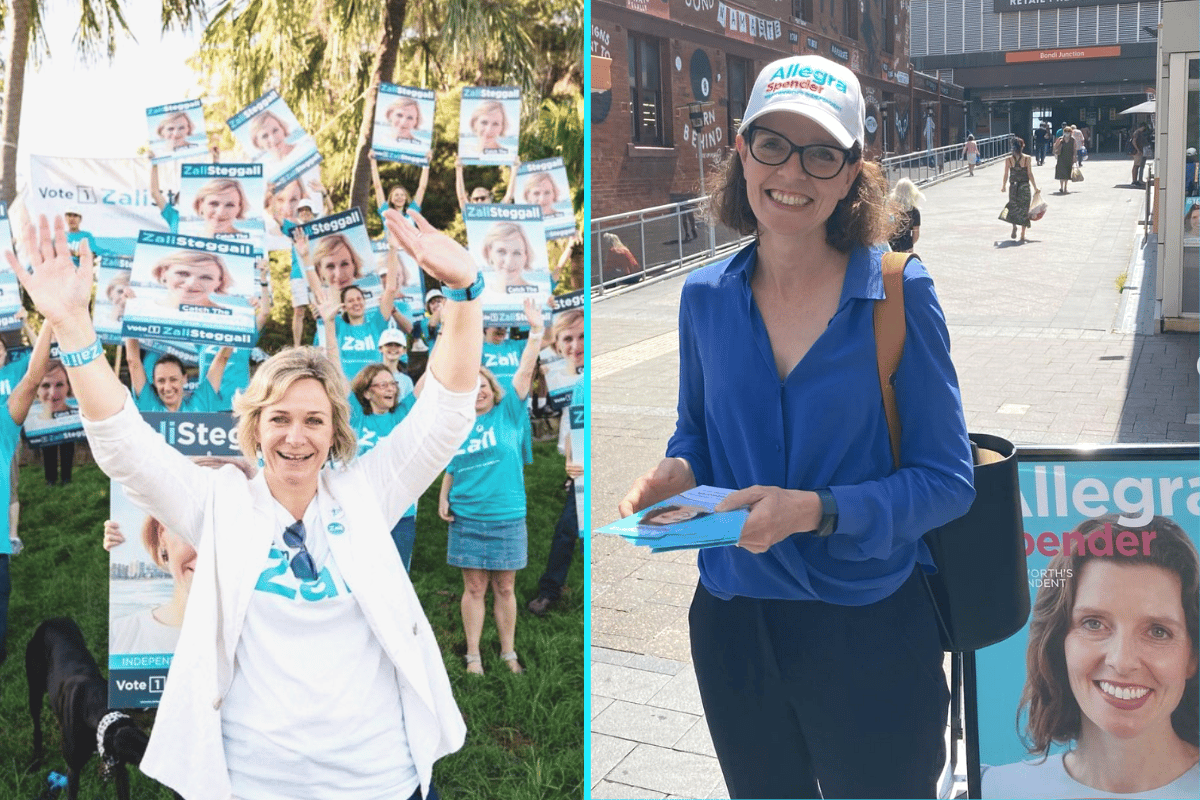 Often we're told that voting for an independent candidate is a 'wasted vote'. The thought process being do standalone candidates really have enough power to make any real change?

But in this year's election we have a lot of independent candidates running, many of whom are women.

And they are making quite the impact so far, with a rise of 'the teals'. They represent a group of 22 independents who have received funding from Climate 200. At the upcoming federal election, Climate 200 has been raising funds to support "underdog" candidates who stand for "cleaning up politics and following the science on climate change". And incredibly, 19 of the 22 Climate 200 candidates are women.

These teal independents are aiming to challenge Liberal MPs in city electorates traditionally considered 'Liberal party heartland'. Given apathy at our top two political options is high - just think of the infighting, alleged bullying and gaffes - some are asking will the independents get more ticks in the ballot box this year? Quite possibly.

Mamamia's news podcast The Quicky spoke to an independent candidate and a Liberal Senator to find out what you need to know before you head to the polls on May 21.

Watch this trip down memory lane: The Goggleboxers watch the historic 'Yes' vote. Post continues below.

But firstly, some context.

A lot of these independents are using the colour teal for their campaigns and marketing to distinguish themselves as part of the Climate 200-backed independents movement. Another interesting thing about these independent candidates is that a lot of them haven't come from the political staffer ranks. Instead, they are working professionals wanting "to make a difference".

Some of the Liberal party's most well-known MPs are at risk of losing their seat in this election to rising independents.

Treasurer Josh Frydenberg is facing up against medical doctor and independent Monique Ryan in the inner-Melbourne seat of Kooyong.

And another woman putting herself forward is Allegra Spender - the independent candidate for the seat of Wentworth, which is currently held by Liberal MP Dave Sharma. A bit of background: Spender is the daughter of late fashion designer Carla Zampatti and former Liberal MP John Spender.

Speaking to The Quicky, she said her decision to go into politics came down to wishing to represent her community and champion multiple issues, including climate change - given she is being backed by Climate 200.

"Independence is about representing your community rather than your party, and that's what I'm really seeking to do," Spender said. "Wentworth is one of the most socially progressive seats in the country, and it is very environmentally and business-focused.

"I'm not standing for this so I can get a bigger job and be a minister. I am standing because I want to represent the community, and that's the real difference versus trying to represent a party's perspective."

Jane Hume is the Senator for Victoria, Minister for Superannuation, Financial Services and the Digital Economy, and Minister for Women's Economic Security for the Liberal Party of Australia.

And from her position, she struggles to see how an independent could thrive when up against major political parties.

"Decisions get made by political parties. And anybody that thinks they can make decisions on their own is kidding themselves. A political party represents lots of people from different parts of the country. And that's what political parties do - they sift through opinions and ideas and come up with the right solution for the majority," Hume said to Mamamia.

From Hume's perspective, an independent can't take part in this process, given they're on their own. Plus, it makes introducing legislation quite difficult.

Of course an argument against voting for a candidate from a major political party is the concept of 'voting along party lines'. Because in the event that an MP's constituents don't agree with a certain stance on something, there is a higher chance that the MP isn't in a position to say no to their party's majority vote, leaving them to toe the party line.

When pressed on this by The Quicky's Claire Murphy, Hume said there are always decisions made that are difficult in politics.

"Sometimes your government/party might make a decision that you do not personally agree with. But there are two elements to that - one is that if you don't agree with your party's position, you can argue that out in the room with your colleagues and test your ideas," Hume said.

"The second is not any one person has the right idea all the time and I think it's really important that you listen to other people's ideas."

In the event that an MP from a major political party is representing their constituents, Hume said that makes things more complex.

"Your constituents might want one thing, but other people want another," Hume said. "In the Liberal Party and Coalition, we have a principle that allows us to cross the floor if we don't agree with our party on the basis of principle. Now, it is a big deal to cross the floor, because going against your party is a difficult thing to do."

Former Australian Prime Minister Malcolm Turnbull has also had a few things to say about voting independent, but unlike Hume, he feels that voting for an independent candidate can be a good idea.

Of course, it is important to note that Turnbull's loyalty to the Liberal Party is no more, considering he was bumped from the top spot via a leadership challenge.

Malcolm Turnbull says Australians are ‘voting with their feet’ to support teal independents, because the Liberal Party's "broad church" has lost a few (moderate) pews https://t.co/4wsKedE46f

"Even if the members of a political party cannot escape from the thrall of the dominant faction, their traditional supporters in the electorate can do so by voting for an independent who has a real chance of success," Turnbull said in a speech forwarded on to The Sydney Morning Herald and The Age.

He went on to say that since his "deposition in 2018", moderate voices in the Liberal Party have become increasingly marginalised. Turnbull also said this marginalisation can best be seen in the debate on climate change, "where the political right, supported by [Rupert] Murdoch's media, have opposed effective action for many years".

"In many respects, this may be the most interesting part of the whole election, because if more of these 'teal' independents win, it will mean the capture of the Liberal Party will be thwarted by direct, democratic action from voters," he said.

It's also interesting to consider Turnbull's position, given Allegra Spender is running for his former seat of Wentworth.

As for what Spender had to say about the argument that independent candidates often struggle to enact policy, she told The Quicky that recent history is proving this idea wrong.

"Let's just look at the last parliament. Independent Zali Steggall has put together a climate bill that has the support of the Business Council of Australia, the ACTU and community members. She put something together that can depoliticise climate change as an issue, and I think that's a huge achievement for her to put that forward," Spender said.

Another example that Spender provided was that of former Wentworth MP - who was an independent - Professor Kerryn Phelps and her work on the Medivac Bill. The Bill allowed critically ill asylum seekers and refugees to be transferred off Nauru and Manus Island to Australia for medical treatment.

"As an independent, she made an enormous difference to those people's lives. What independents can do is actually put forward bills and legislation that the community backs. And they can also put pressure on the government to deal with issues that people really care about," Spender said.

"What gives me joy is trying to make things better. And I'm a real builder and listener and so I'll work very constructively and very pragmatically with whatever government is in power to get the best outcomes."

Ultimately, the end decision lies with voters. And if you're still umming and ahhing over whether to vote for an independent, a safe bet is to just put your weight behind the person or party that best supports your political ethos.

An independent might only be one person, but so are you. And if 'every vote counts' we can apply the same to politics.

Reply
Upvote
1 upvotes
Voting for independents is a 'wasted vote' in the same way that an independent corruption commission would be a 'kangaroo court'. These are opinions of self-interest.
While it is true that a government consisting entirely of  independents would find it harder to get things done, that's not going to occur, the rusted on party faithful voters will see that the major parties stay major.
A minority government is nothing to fear, it lifts the tone and productivity of parliament by enforcing collegiality. Up until 2018 (the latest figures I could find) the Gillard minority government was the most productive government to date, passing around 0.6 Acts per day. A minority under Morrison would likely be problematic, in that he is famously a reluctant negotiator and tries to impose his own will, even within his own party. But, the Morrison government has been incredibly unproductive, even with a majority. The prospect of a minority government, with greater independent representation, isn't a problem for Australia, another term under Morrison would be just more creeping paralysis, brought about by image management, politicking, prosecution of empty culture war issues and spin.
What IS importantly true, is that a greater proportion of independents reduces the influence of large donors on government. A party under the influence of large donors, simply can't execute on those donor's shopping lists without a simple majority. And this is why the LNP is imperilled right now, its agendas have, for too long, not reflected even the actual mandate given to them by voters on the right. 70-80% of Australian voters want an effective integrity commission, the Morrison government could not look more reluctantly skittish on the issue.
With even their own LNP voters wanting action on integrity and their own political survival at stake, the Morrison government hasn't even tabled legislation on that matter to parliament. Even the most polarised onlooker, who is rusted on to their vote for the right, can only reach ONE conclusion, when asking themselves "Why no integrity legislation?"
S
summer 3 months ago

Reply
Upvote
Independents will never have a majority power but they do have the power to influence major decisions on policies and bills. They don't have to cross the floor, they can choose whichever side they think is better. Remember Rob Oakshotte in the 2011 campaign? It was literally down to him as to who would win. If you don't support any of the major parties or are undecided, going for an independent is definitely worth a shot if you support their policies, if they can get into Parliament they can really make or break policies.
Resources
Very Peri
News
General
Opinion
True Crime
Politics
Sport
Explainer
Entertainment
Celebrity
Reality TV
Movies
TV
Books
Rogue
Royal
Lifestyle
Beauty
Fashion
Weddings
Home
Wellness
Health
Fitness
Travel
Food
Family
Before The Bump
Pregnancy
Baby
Kids
Teens
School
Parent Opinion
Work & Money
Money
Finance
Career
Lady Startup