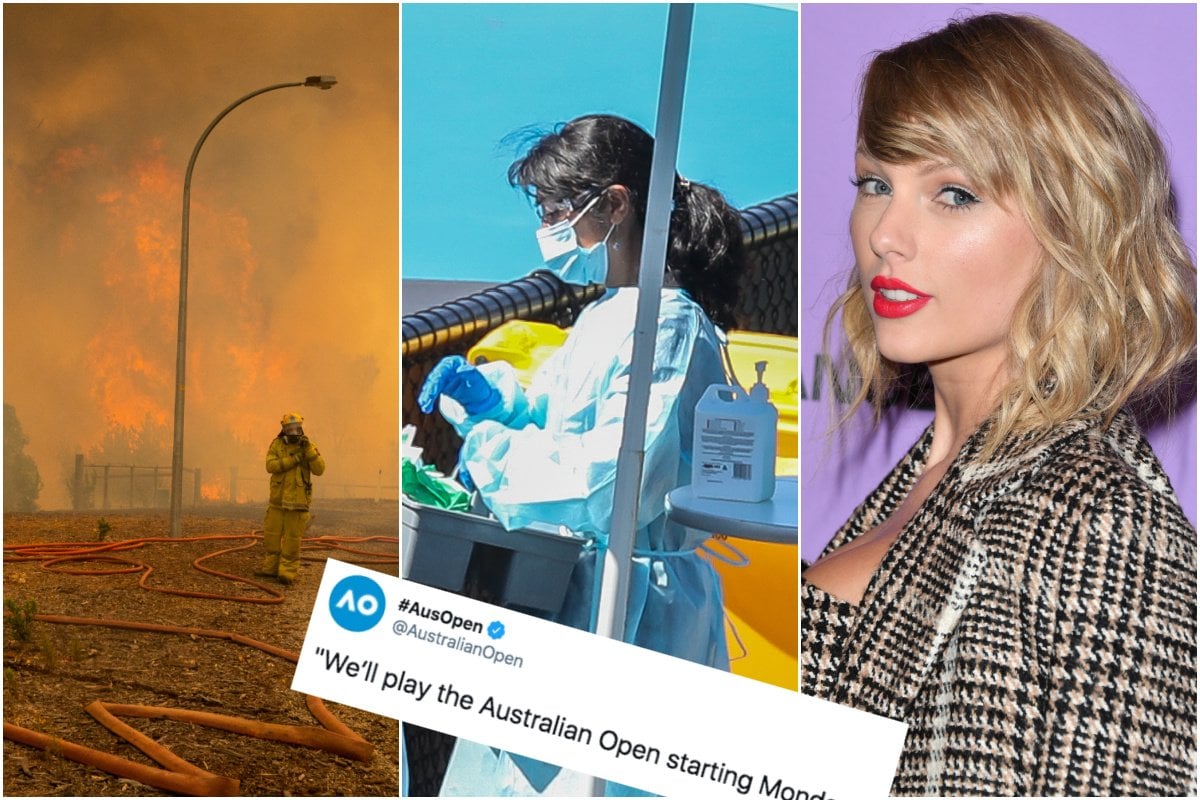 A NSW magistrate on Friday found the 32-year-old had yelled "f**k you, I'm going to get you" 20 centimetres from Mr Hooke's face during an expletive-riddled rage, sparked when Burgess was asked to leave the Hookes' Southern Highlands property in October 2019.

Burgess was found guilty of intimidation, having intended to cause Mr Hooke fear of physical or mental harm.

The retired star was sentenced to a two-year community corrections order, requiring him to be of good behaviour. 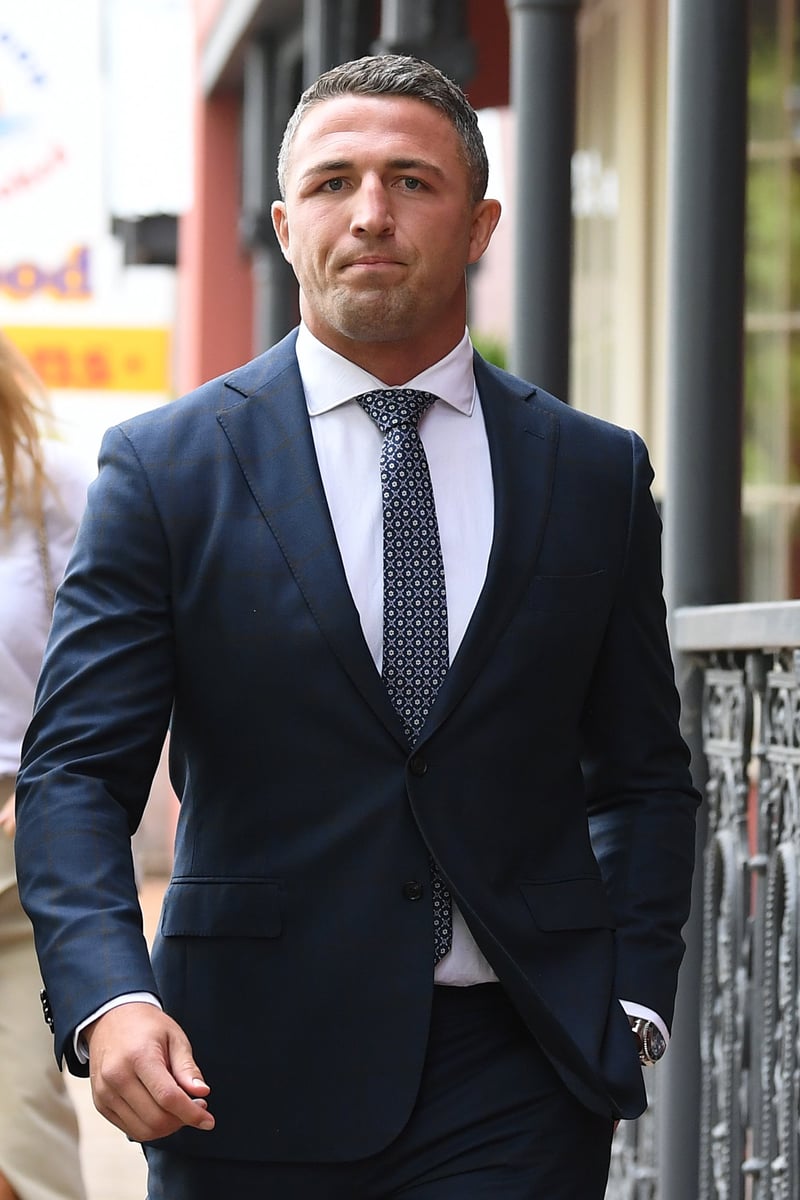 "I'm confused with the decision, I will appeal the decision and I won't say anything further," Burgess told reporters as he left court.

Burgess had denied swearing in the home and cast the father of his estranged wife Phoebe Burgess as the aggressor.

Ultimately Burgess's own words undermined his defence, the magistrate found.

Two bushfires in Perth burning out of control.

The main Perth fire has grown into a 130km wall of flames with authorities concerned wind gusts of 70km/h could carry embers from the main fire front and ignite more fires.

A second fire has already sparked up at Wattleup, north of the Wooroloo blaze which has been burning since Monday and destroyed more than 80 homes.

The DFES have warned residents in the area to enact their bushfire plan now or leave now if not prepared, with more bushfire emergency warnings released this morning.

Premier Mark McGowan spoke to reporters Thursday, and said: "the devastation caused by these bushfires is almost too much to comprehend. We're all thinking of those who've lost their homes. In some cases, their livelihoods. It's devastating." 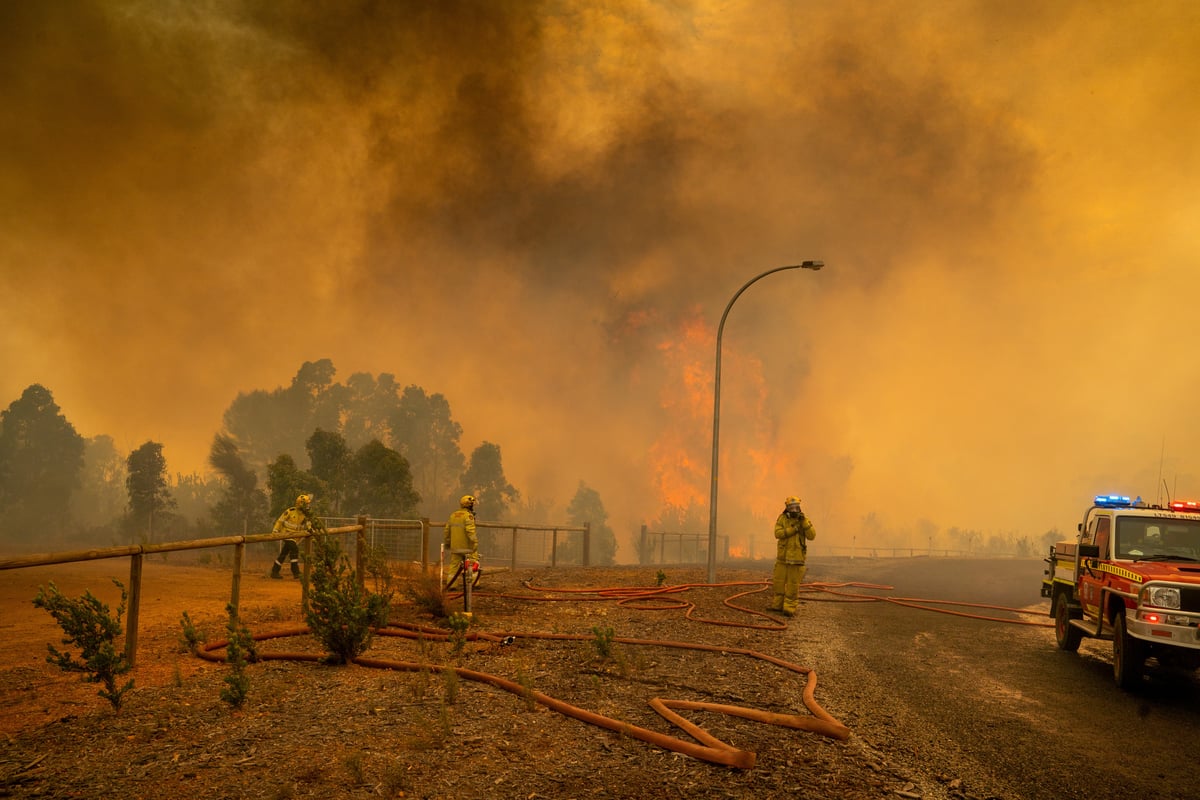 The Rapid Damage assessment team have identified 81 homes have been lost to the blaze with the number expected to rise as they work through the area, as firefighters continue to work to bring the Wooroloo bushfire under control, with more than 9,464 hectares burnt in the Perth hills area. Image: Evan Collis/Department of Fire and Emergency Services/Getty.
ADVERTISEMENT

"The embers were raining in on us last night with the wind changing and picking up," he told AAP.

"I had all my pumps set up and the neighbours all banded together and helped each other.

"But after they dropped the retardant the fire didn't move."

Seven Network presenter and former White Ribbon chairman Andrew O'Keefe was "not the aggressor" in an alleged domestic assault and will fight the charge against him, his lawyer says.

Police will allege the former Weekend Sunrise host assaulted his partner, haematologist Orly Lavee, at an apartment in Randwick in Sydney's east on Sunday.

O'Keefe did not appear in Waverley Local Court on Thursday when a magistrate adjourned his case.

Outside court, his lawyer Claudette Chua said O'Keefe would be fighting the charge.

The lawyer for former Channel 7 host Andrew O’Keefe has warned accuser Dr Orly Lavee she will “have a lot to answer for”. https://t.co/lsTrBNOY7N

"I have had an opportunity to review the facts of the matter and I will say this: Mr O'Keefe was certainly not the aggressor in the situation and Dr Lavee will have a lot to answer for," Ms Chua said.

Ms Chua said she sought an adjournment because O'Keefe had been "unable to give full instructions on such short notice".

O'Keefe has been granted conditional bail. The case will next be heard on February 18.

Australian Open boss Craig Tiley remains "absolutely confident" the grand slam tournament will start on Monday as planned despite its links to a hotel quarantine worker who tested positive for COVID-19.

Tiley revealed 160 players and 347 of their support staff who stayed at the Grand Hyatt hotel in Melbourne are in isolation and undergoing testing, with Australia's Matt Ebden posting a photo on social media after completing his test.

Other players who didn't quarantine at the Grand Hyatt are free to train at Melbourne Park.

"We are absolutely confident the Australian Open is going to go ahead," Tiley told media on Thursday.

"We've got a period we've got to work through with those 507 players and staff but the probability is very low there will be any issue and we fully expect them to test negative and we will continue with play tomorrow.

"We will be starting on Monday and we have no intention of changing times of the Open."

Victoria's Deputy Chief Health Officer Professor Allen Cheng said the risk to players and their support staff was low and the testing was a precautionary measure.

The hotel worker, who was on the same floor as infected guests, worked his last shift on Friday and returned a positive result on Wednesday.

"I think it's unlikely but we have asked for testing of all of the players and other people who have been in that hotel," Cheng said on Thursday morning.

Gay conversion practices have been banned in Victoria following a lengthy debate in parliament overnight, during which two Liberal MPs broke with party ranks to vote against the bill

Gay conversion practices have been banned in Victoria following a marathon debate in the state's parliament overnight. https://t.co/cNQ0OxMNIX

The bill will outlaw practices that seek to change or suppress a person's sexual orientation or gender identity.

Those found to have engaged in conversion practices that result in serious injury will face penalties of up to 10 years' jail or up to $10,000 in fines.

West Australians will be required to wear face masks while out in public and be restricted to seated service at bars and restaurants for another week when the state emerges from lockdown.

WA has posted four consecutive days of no new community COVID-19 cases, paving the way for metropolitan Perth, the Peel region and South West to exit lockdown at 6pm on Friday.

But Premier Mark McGowan has announced a range of restrictions will remain in place for Perth and Peel until 1201am on Sunday February 14.

I know this week has been tough.

But we live in the best country in the world – and the best State in the country.

And we will get through this.

All residents, including teachers and high school students, must wear masks while outside of their homes except for during vigorous outdoor exercise.

A 20-person limit will be imposed on all private indoor gatherings while a four square metre rule and a cap of 150 attendees will apply to hospitality and retail venues and weddings.

Restaurants, pubs and bars can only have seated service and only essential travel is permitted in and out of the combined Perth and Peel regions.

Taylor Swift has been sued by a theme park for trademark infringement over the title of her latest album evermore.

The owners of Evermore, a venue in Pleasant Grove, Utah, allege the pop superstar's record, released in December, has led to confusion over whether it is linked to the attraction.

They say they own the trademark to the name and it was violated when Swift - one of the world's biggest-selling music artists - started releasing merchandise related to her album.

In the lawsuit, lodged in a US District Court in Utah, the theme park's owners claim they have spent millions of dollars on the attraction, which opened in 2018.

They say in the week following the release of Swift's album their website traffic "experienced a dramatic departure from typical levels".

In a December letter from the Evermore park's legal team to Swift, lawyers said they are "open to discussing reasonable terms for your discontinuation" of the trademark.

The lawsuit is seeking millions of dollars in damages. In a letter filed in court, lawyers representing Swift said "there is no basis" for the claim.

- Sydney has been ranked as the second healthiest city in the world for happiness and life expectancy behind Amsterdam.

- The UK government will present the details of a coronavirus hotel quarantine policy next week.

- Convicted sex offender and former Hey Dad! star Robert Hughes has been denied parole for a second time, with authorities deeming he remains an unacceptable risk to the community.

Reply
Upvote
1 upvotes
@mamamia-user-236023277 No, that's not what happened at all. You can be against gay therapy and still think the law introduced is wrong. Laws are complicated, they want to get it right.
For example, the below groups have come out against it:
Royal Australian and NZ College of Psychiatrists
Australian Medical Association
G
guest2 a year ago