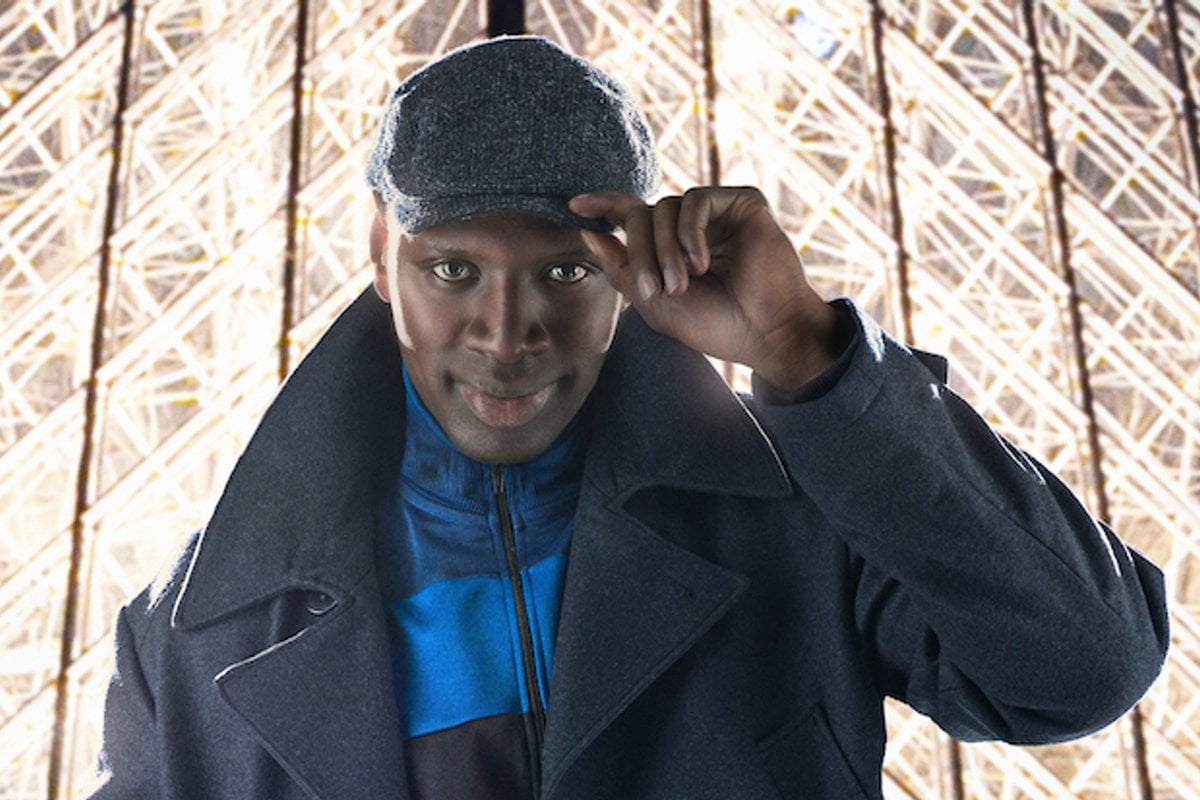 Netflix's Lupin is the streaming service's first French-language series to find a mainstream audience in the US. It's set to be bigger than both The Crown and Bridgerton in Australia.

The series (the first season dropped on Netflix in January) follows the story of Assane Diop (Omar Sy) a ridiculously good looking tall man who wears great coats and does a sneaky sneak.

When Assane was young, his father worked as a chaffer and butler for a wealthy white family. When the family patriarch accused Assane's father of stealing a diamond necklace that was once associated with Marie Antionette, he was thrown in jail. He later signed a confession and then ended his own life.

Watch the trailer for Netflix's Lupin. Post continues below.

So is Netflix's Lupin based on a true story? Well no, and... yes. Let's break it down.

Is Lupin based on a true story?

No, Lupin is not based on a true story but the series takes its inspiration from the fictional character of Arsene Lupin.

The character of Arsene Lupin was first created in 1905 by French writer Maurice Leblanc, for a series of short stories that were published in the French magazine, Je sais tout. After the success of the short stories, Leblanc went on to write over 20 books about Arsene Lupin.

It's believed Leblanc may have taken inspiration for creating the character of Lupin from the trial of Marius Jacob. Marius Jacob was a French anarchist who banded together a gang of fellow "anarchists" who stole from the rich and donated a percentage of the profits to the anarchist cause.

The character has since been adapted for TV dramas, films, comics and video games.

In the series, the character of Assane Diop is heavily influenced by the adventures of Arsene Lupin, who he has been reading about since he was a small child.

Like the character he is obsessed with, Assane has made himself into a "gentleman thief" and a master of disguise, who is able to slip in and out of some of the most secure locations in the world undetected.

In the first episode, the necklace is about to go up for auction at the Louvre. Assane gets a job as a janitor at the Louvre and carries out a plot to buy the necklace at the auction, replace it with a fake and the steal the real one.

The real story of the necklace all began with a supposed "countess" named Jeanne de Valois-Saint-Rémy, who called herself the "Comtesse de la Motte". La Motte told people she was a descendent of the former French royal family but many found her claims to be dubious.

Assane and the necklace. Image: Netflix.   Living off her husband's tiny wage, La Motte was determined to create a better life for herself. She started sleeping with a soldier named Rétaux de Villette, who served alongside her husband.

In 1783, La Motte also became the mistress to Cardinal de Rohan. The Cardinal had fallen out of favour with the Queen, Marie Antoinette, and wanted to get back in her good graces.

La Motte discovered the jewellers Charles Auguste Boehmer and Paul Bassange were attempting to sell a diamond necklace that had originally been designed for King Louis XV's mistress, Madame du Barry. The King died before he could pay for the necklace and the jewellers were facing bankruptcy.

La Motte passed the necklace onto her husband, who immediately started selling off the individuals gemstones in London.

The ruse came to an end when the Cardinal was unable to make his first payment nor return the necklace. The jewellers complained to the Queen who denied having any knowledge of the scheme.

Listen: The biggest Netflix show that no one is talking about. Post continues below.

The Cardinal, La Motte, Villette and d'Oliva were arrested. The Cardinal was acquitted while La Motte was sentenced to be whipped, branded and imprisoned for life. In 1789, she escaped Salpêtrière prison and fled to London, where she wrote her memoirs blaming the Queen for the scam.

Many believe the "Diamond Necklace Affair" and La Motte's memoir led to the eventual downfall and death of Marie Antoinette.

The first season of Lupin is streaming on Netflix now.