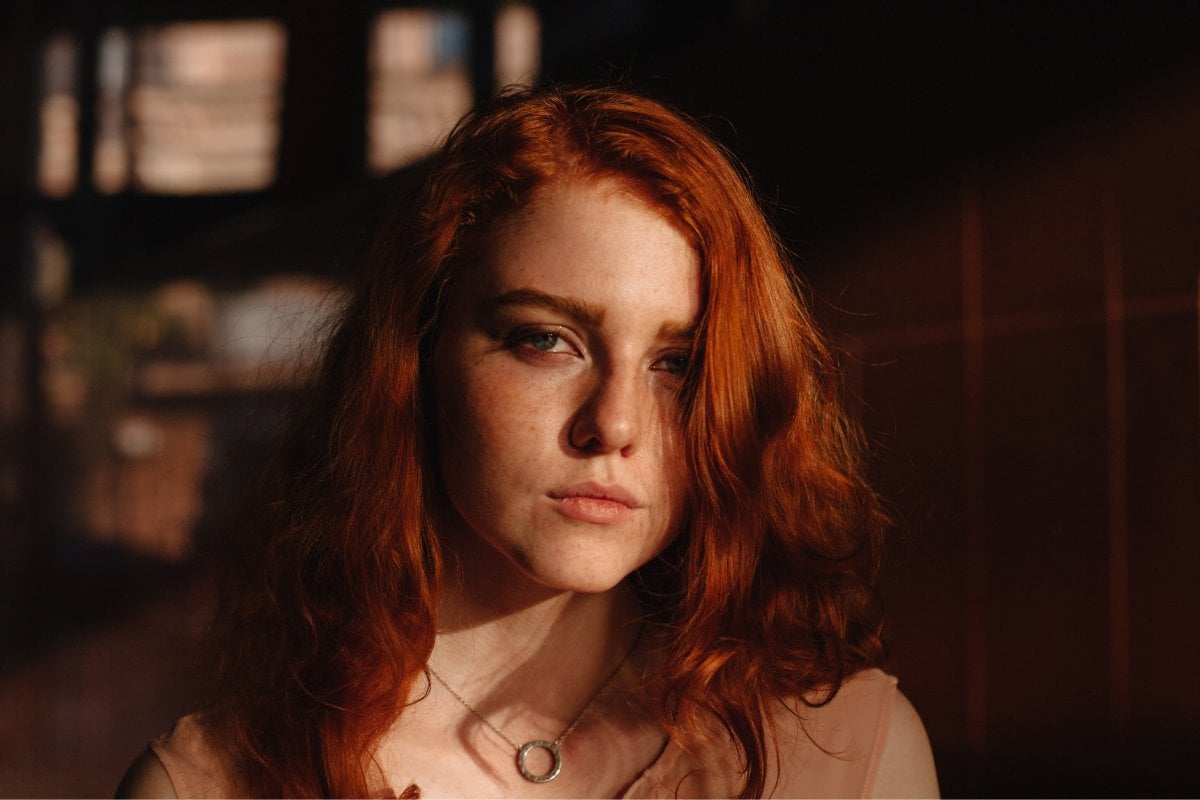 This post deals with abuse and mentions suicide. It could be triggering for some readers.

I found myself on the bedroom floor, trying to find good light for recording the video I was going to send to be shown at my sister's funeral.

My hair was freshly done. I'd dyed it bright copper red the day before I got the call from my mum saying my older sister had died. When I looked at myself in my phone's camera, seeing the red hair made me feel a little sick.

Watch: Even if they aren't physically violent with you, they could still be abusing you emotionally. Post continues after video.

I already couldn't wait to get back to my natural brown - even after the time and money I had spent on my new colour. The colour was now an unwanted physical stamp reflecting the phone call from my parents telling me my sister had died. One glance into the mirror reminded me of 13 years of pain caused by my family. Pain from being invisible to them because all their energy was spent on keeping my addicted sister alive. I felt ridiculous with new hair when my parents were in a world of pain.

Hair aside, I had to record my video.

Me with my hair: lying.

I had already decided I was not flying me or my family to the Gold Coast, Queensland, from my home in Christchurch, New Zealand, for the funeral.

I had decided not to because one of my kids had a tummy bug - the family couldn't travel over with a vomiting child. But there was the option for me to go. I remember my oldest sister calling me (knowing that I was the process of deciding if I should go or not) after many years of not speaking. She talked passionately about the power of God and how she was sure that if I went I wouldn't get the tummy bug. She said it was the devil trying to divide our family, again, at a pivotal moment, but GOD was stronger than my fears.

I didn't go. Believe it or not I can't even remember if I got the tummy bug or not, even though it was only five years ago and such an important part of this story.

I didn't go because I really didn't want to go. Tummy bug or no tummy bug, I did not want to be there with any fibre of my being.

So here I was, on the floor of my room with the door closed while my husband took care of our two kids, aged three and 18 months.

Only I knew deep in my soul that I didn't go because I didn't want to go. I didn't want to me making this f**king video either, but I could do the video - I couldn't do the funeral. Not because my sister was dead. Selfishly it was an internal battle that I didn't have words for before now. It was the all too familiar feeling of doing something that I didn't want to do that offended my soul, with the opposite pull of doing it because it was right and good. Oh, 'good' - how you have shaped my life.

My parents would appreciate this video, They would play it and the other people there (the few) would see that I had wanted to be there but I couldn't.

What the f**k to do you say in a video for your sister's funeral? Movies tell us you will be crushed by your sister dying and you will have some poignant words to say. I had no words. No happy anecdotes. Not a funny, sweet story to be found. My brain was broken and failing me, surely I'm just not remembering? Being dramatic with my feelings?

'It's okay, we weren't close' was my standard response when people responded to the news of my sister dying. I had a good stash of things to say.

We were never close.

We haven't spoken in over 10 years.

She struggled with addiction.

I remember knowing I had to lie. I couldn't NOT send a video, that wasn't an option. My parents would be crushed. The other people would think badly of me. I had to send a video; I had to find something nice, good, to say, so I did what I had to do - I lied.

I told a story about my first day of second grade. I would have been six years old and I remember my parents had decided I was old enough to catch the bus to school. It was a 30-minute walk to the bus stop and a 20 minute bus ride to school. My sister Maria - the one who had passed away - would be with me. She was five years older.

I told this story on the video and then I wrapped it up with a bow at the end, saying 'but I knew my big sister was there to look after me'. That was bullsh*t. She was not there to look after me. My memory is her dumping me at the classroom door and laughing with her friend about how nervous I was. 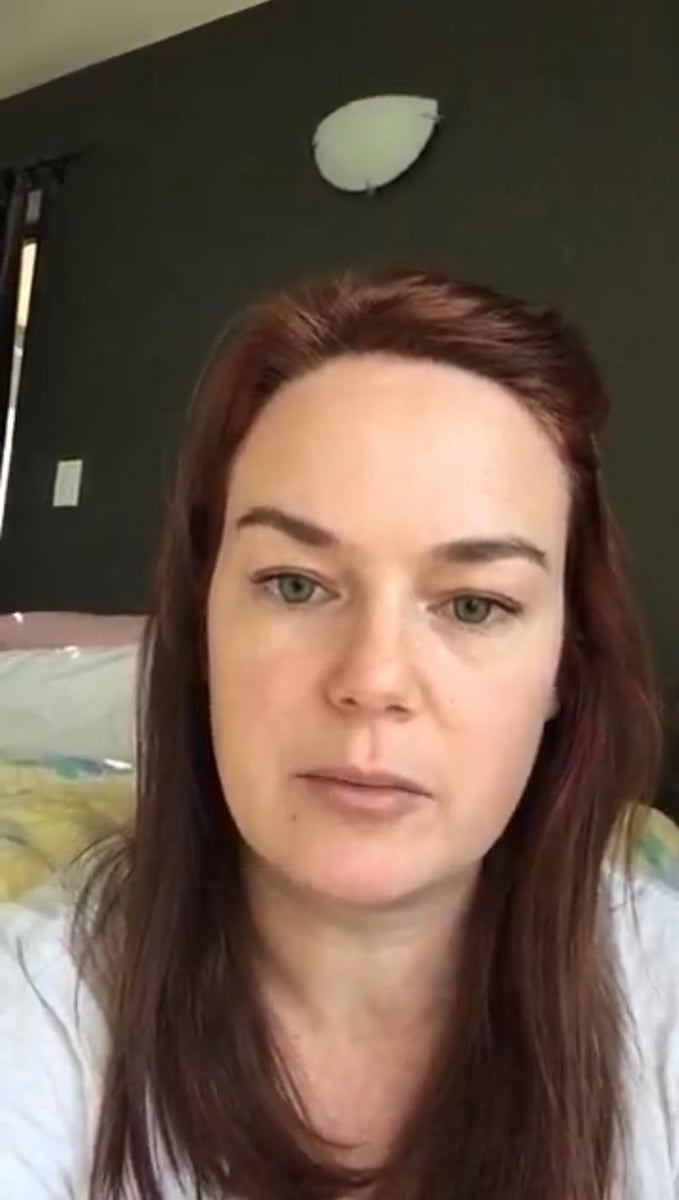 Me recording my video. Image: Supplied.

All this is… what it is, but I had a moment this week.

I got in touch with my sister's childhood best friend, Natasha, via Facebook messenger. It was a strange, out of the blue message, asking her if she thought my sister was gay.

Over the years, I'd developed a theory that she was gay and that this knowledge would have eaten her up on the inside knowing that my black and white religious parents would never accept her. I thought this might have been what led to her life of addiction, cutting, bulimia, and suicide attempts - among other things.

She sent back a very long and thoughtful message. In many ways it was not what I expected. She didn't think she was gay.

Then she wrote something that made me gasp out loud before bursting into heaving sobs.

'I do remember she wasn't very nice to you and one night or day I was over (your parents were out) and she got a knife out and started threatening you and I absolutely went off at her and really told her that it was awful. She listened  andput it away (it was a bit crazy). I'm not sure if she did that again or was horrible all the time (but it was that memorable that I have told Paul (her husband) years later, saying she was horrible to her sister). I'm sorry I know that's pretty sad to tell you.'

For context I would have been about eight or nine years old here, while Maria and her friend were about 12 to 13. I remember it vividly. I was extremely scared. I thought she would use the knife on me in some way. I was terrified; I wanted Mum to be home. I felt unsafe.

This message was so generous to me. Natasha gave me a gift that I can never fully express my gratitude for. I don't think she will ever appreciate the depths of it.

'She was horrible to her sister.'

This is what I sobbed at. She was there - she saw a snippet of my experience with my sister and she deemed it to be 'horrible'. It wasn't me being super sensitive. It was mean and cruel and that wasn't the only story I have to tell. I always thought I was just too sensitive. That I was too much of a good girl to get the joke.

Stop making such a big deal about it, I thought. All siblings fight! It's part of life!

I called my bestie that afternoon, fizzing to tell her my personal Oprah 'Ah-Ha' moment. We talked about it and she mentioned the word 'abuse' regarding my sister's treatment of me.

"Wait, abuse? Are we using that word?"

Something in me bristled. We quickly signed off as I was at school pickup. Back to the life of a busy working mum. I swear that parenting is just trying to talk to your besties about your trauma and growth in stolen moments between school hours.

Today I called her again. "Are we sure we are using the word abuse?"

C
casey.waite a month ago