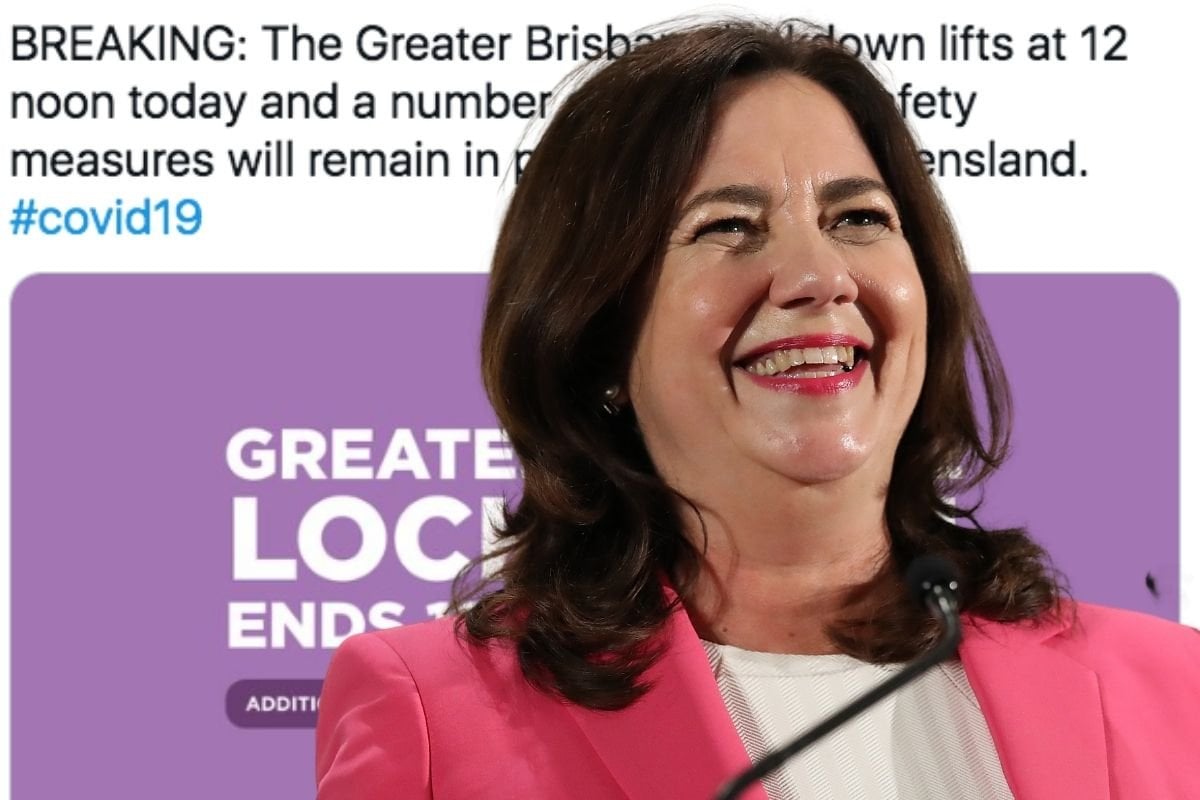 Brisbane lockdown lifting at midday just in time for Easter.

More than two million Queenslanders will today be released from lockdown in time for Easter, after just one new locally acquired COVID case in the state.

A number of temporary safety measures will remain in place for all of Queensland for a fortnight, but the lockdown will lift as of midday Thursday.

BREAKING: The Greater Brisbane lockdown lifts at 12 noon today and a number of temporary safety measures will remain in place for all of Queensland. #covid19 pic.twitter.com/90AI5K4PME

"So for the next two weeks from 12 noon today until Thursday, 15 April, all Queenslanders will be required to carry a mask when they leave their home. We will also ask you to wear those masks in indoor spaces such as shopping centres and supermarkets, indoor workplaces, public transport," said Premier Annastacia Palaszczuk.

"Anyone attending food or beverage establishments, so if you’re out there going to a restaurant or cafe or a pub, you must be seated. We have to go back to the seating... Gatherings at your home right across Queensland will be restricted to 30."

Palaszczuk says the decision to lift the lockdown at 12pm is to ensure dangerously busy traffic doesn’t build up on roads as people try to escape the city to go on Easter holidays.

"This was one of those participants in that party that happened at Byron Bay. So when the person came back to Queensland, they went into quarantine and they were tested on Monday night and they were negative on Monday night. Then they were tested again Wednesday morning when they were positive. So they have been in quarantine during their infectious period. So a no risk at all. So definitely a linked case, but also that additional bonus that they're in quarantine. And that was our one community-acquired case. And the reason I can be reasonably confident that we're managing these two outbreaks is the amount of testing," she said.

Two new cases of community transmission were recorded in Greater Brisbane on Wednesday. There are around 71 currently active cases in the state.

A COVID-19 outbreak in Queensland has jumped the border, with the sole case diagnosed prompting the cancellation of a popular music festival and the reintroduction of restrictions in northern NSW.

A NSW man in his 20s returned a positive test to the virus late on Tuesday, after unknowingly infectious travellers visited venues in the Byron Bay region.

The case will be included in Thursday's figures, and is the first in NSW linked to two separate clusters spreading through Queensland.

The man's diagnosis prompted Health Minister Brad Hazzard to cancel Bluesfest, the second year in a row the popular event has not gone ahead.

The festival was due to begin on Thursday, and was expected to draw up to 16,000 people per day.

Read the full Bluesfest statement via our website: https://t.co/guopwZMVFe pic.twitter.com/t5LaUo63CN

Authorities have also reintroduced a range of restrictions for four council areas near the border.

Until at least Tuesday, gatherings in Byron, Ballina, Tweed and Lismore will be limited to 30, the "four square metre" rule reintroduced, and masks mandated in some settings.

The premier also urged residents living in the area not to head elsewhere for the Easter break.

Health Minister Greg Hunt has stepped in as peacemaker between the states and some of his federal colleagues after they engaged in a stoush over the COVID-19 vaccine rollout.

Two federal ministers sparked outrage from NSW and Queensland with their criticism of the speed of the rollout and the warehousing of doses.

"Our biggest issue with the vaccines at the moment is to make sure that the states and territories rollout the supply of the vaccines that they have," Tourism Minister Dan Tehan said.

Four million Australians were supposed to have received a coronavirus vaccine by today - but the latest figures show fewer than 700,000 of us have had the jab. pic.twitter.com/gXYMqKpZ52

He wants states to use their "stockpiles", especially to cover vulnerable groups.

Another minister, David Littleproud, said he wants states, particularly his home state of Queensland, to "pull their finger out" as frontline workers wait for the jab.

According to federal figures, NSW has used only half of the 190,610 doses it had received, and Queensland was at 55 per cent.

"It would be good if the federal government took responsibility for something," Mr Albanese said.

A week after being accused of raping a sex worker, Nationals MP Michael Johnsen has "with a heavy heart" quit the NSW parliament, triggering a by-election in his marginal Upper Hunter seat.

Nationals Leader John Barilaro and Premier Gladys Berejiklian welcomed the news, which has plunged the coalition into minority government.

Mr Johnsen held the Upper Hunter electorate by just 2.2 per cent - making it vulnerable to Shooters Fishers and Farmers or Labor.

"It is with a heavy heart that I will be tendering my resignation from the NSW parliament as the member for Upper Hunter - a regional economic powerhouse that has been my great privilege to serve," Mr Johnsen said in a statement on Wednesday.

"I believe I have served it well, having bought hundreds of millions of dollars of government investment into the electorate during my tenure."

The pressure on Mr Johnsen to quit escalated on Tuesday after the ABC reported he'd offered a prostitute $1000 to have sex with him at his parliament house office, exchanged lewd texts with her and sent her an obscene video while sitting in the parliamentary chamber.

Last week Mr Johnsen revealed he was being investigated by police after the same sex worker accused him of raping her at the Blue Mountains in 2019.

Boy, 6, missing in NSW near bushland.

A police helicopter will join the search for a six-year-old boy with Down Syndrome who's gone missing overnight in northwest NSW.

Braxton Plant was last seen at his home on Wallangra Road, Wallangra, about 4pm on Wednesday.

Emergency services were contacted at about 7pm and officers from the New England Police District began the search.

NSW Police and the boy's family are worried because he is unable to speak and has gone missing near dense bushland and dams.

When he was last seen by his family, Braxton was playing in the mud and not wearing any clothes.

A co-ordinated land search is underway with help from Polair.

House prices are expected to have seen another strong lift in March, matched by a further rise in demand for mortgages with interest rates at record lows.

The CoreLogic home value index for March is released on Thursday, having surged two per cent in the previous month, which was the biggest monthly gain in over 17 years.

People under 40 will find it increasingly difficult to buy a house after property prices across Australia jumped by 2.1 per cent in February and are expected to increase again for the month of March.https://t.co/p0keUY2238

It took prices in February comfortably above their pre-COVID levels and 0.7 per cent above the previous all-time high in September 2017.

Economists at Westpac expect the index will go one better in March, rising 2.5 per cent, which would be a 32-year high in terms of monthly gains.

The Queen has paid tribute to the "skill and sacrifice" of the Royal Australian Air Force (RAAF) as she marked its centenary during her first public engagement of the year outside Windsor Castle.

The 100th anniversary of the RAAF was commemorated by the Queen during a service at the Commonwealth War Graves Commission (CWGC) Air Forces Memorial in Runnymede, Surrey, on Wednesday.

In an unscripted moment, the Queen quizzed one Australian serviceman about his work with Typhoon jets and asked if they were "being sent off to chase the Russians" and was told "That's correct, ma'am, it's a lot of fun for us!".

The visit to the Air Forces Memorial at Runnymede was only the third time since March 2020 that the Queen has appeared outside Windsor Castle https://t.co/YW2MDKdi98

Sending her "best wishes and congratulations" to the RAAF, she wrote in a foreword to the order of service: "As one of the oldest air forces in the world, it is fitting to pay tribute to the efficiency, skill and sacrifice of the men and women who have served in its ranks, in Australia and overseas, during the past 100 years.

"Throughout my reign, the Royal Australian Air Force has shown immense dedication to duty and has defended our freedom in many conflicts around the world."

Facebook and Instagram have removed an interview with former President Donald Trump by his daughter-in-law, Lara Trump, simply because it “featured Trump speaking” and the “voice of Donald Trump,” Facebook said in an internal email.

Facebook permanently banned the former president from their platform in January after the Capitol riot.

Donald Trump has hinted he may run for president again in 2024 in his first sit-down interview since leaving the White House. #9Today pic.twitter.com/VMykDvWj1h

Lara Trump, who also contributes to Fox News, shared a screenshot of an email sent by a Facebook employee, saying the company would be taking down the interview.

"This is so horrible – what is our country becoming?" Trump's son Eric wrote on Instagram.

- A puzzling tweet from the US military command that read, ";l;;gmlxzssaw, and received 12,400 likes and 9000 tweets in 10 minutes was written by a rogue toddler. With the command forced to issue a statement explaining that an employee's child managed to hit send while their parent was away from the computer.

lachy8 a month ago