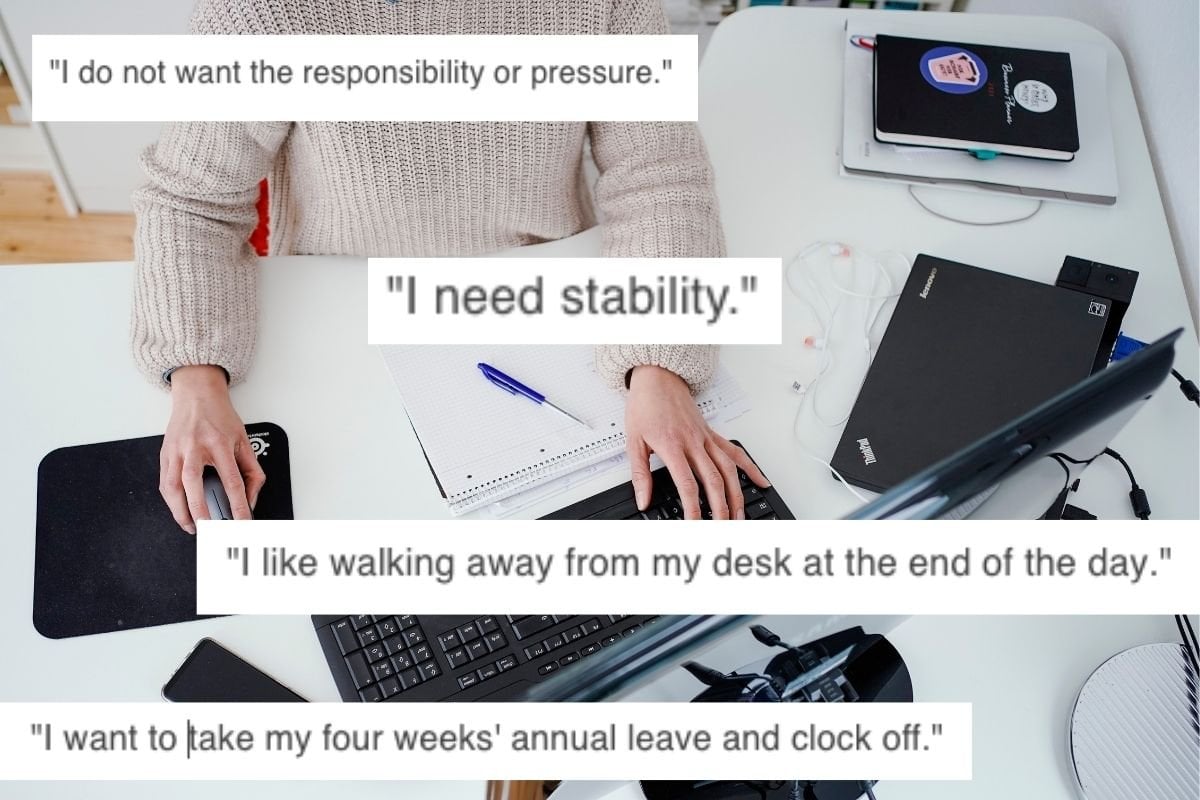 There's no doubting it's the era of the side-hustle.

Being your own boss and building an empire has never been more attractive, particularly for women.

We're told it's the ultimate way to set your own hours and make your own rules, with stories of overnight success, seven-figure incomes, and being able to 'pick' when and where you work making the entrepreneurial lifestyle seem almost too good not to try.

Watch: If you do want to start your own business, we've got you covered there too. Post continues after video.

But what you'll read about beneath those headlines are the long hours, grit, determination and angst that go into launching your own company. And for every entrepreneur, there are plenty more women out there who have never, and will never, be interested in starting their own business. And that's fine too.

As career coach and founder of The Careers Academy Jane Jackson told Mamamia, it's about time we started heralding both career paths - the entrepreneurs, and the 'non-preneurs' amongst us.

The truth is - both are true. One just comes with a glossier cover.

As Chelsea told Mamamia, she loves her job - but it's still a job.

"There are other things I want to spend my time doing and the ability to close my laptop and switch off from it is the most important thing to me. I probably value work-life balance more than anything," she explained.

This is a common train of thought. As Claire shares, she is happy to "contribute 100 per cent during my working hours," but once she clocks off, that time is hers.

"I like walking away from my desk at the end of the day knowing that someone else is in charge," she said.

For Jessie it's about structure.

"I need structure imposed from.. elsewhere. I struggle with self discipline. I do not want the responsibility or pressure of having to make career/business defining decisions on a daily basis. I like to create things, in the context of a team, surrounded by people who are cleverer than me," she told Mamamia.

For Nicolle it's the idea of instability that turns her off going it alone.

"I wouldn’t even apply for contract roles when I was starting in my career because I was worried about what would happen after that 12 months ended. I need stability. I like change and to roll with the punches - but I got a job at 15 and have worked ever since, sometimes three jobs at once. Growing up with money struggles, I wanted to make sure I would always have my own money and the thought of not having a steady income is frightening."

As Jackson explains, she has many clients who come to her and feel like they should be wanting 'more' because of the hype social media sells.

"What many don’t realise is that the 'success' you see on social media often is smoke and mirrors and the gurus are not letting on how much hard work is required to be successful. It’s important to ask yourself, why do you want to start a business?"

Jackson tells participants if they leave her business workshop having decided that entrepreneurship is not for them, "I will have saved you years of exhausting work, sweat and tears and most likely saved you a lot of money too." 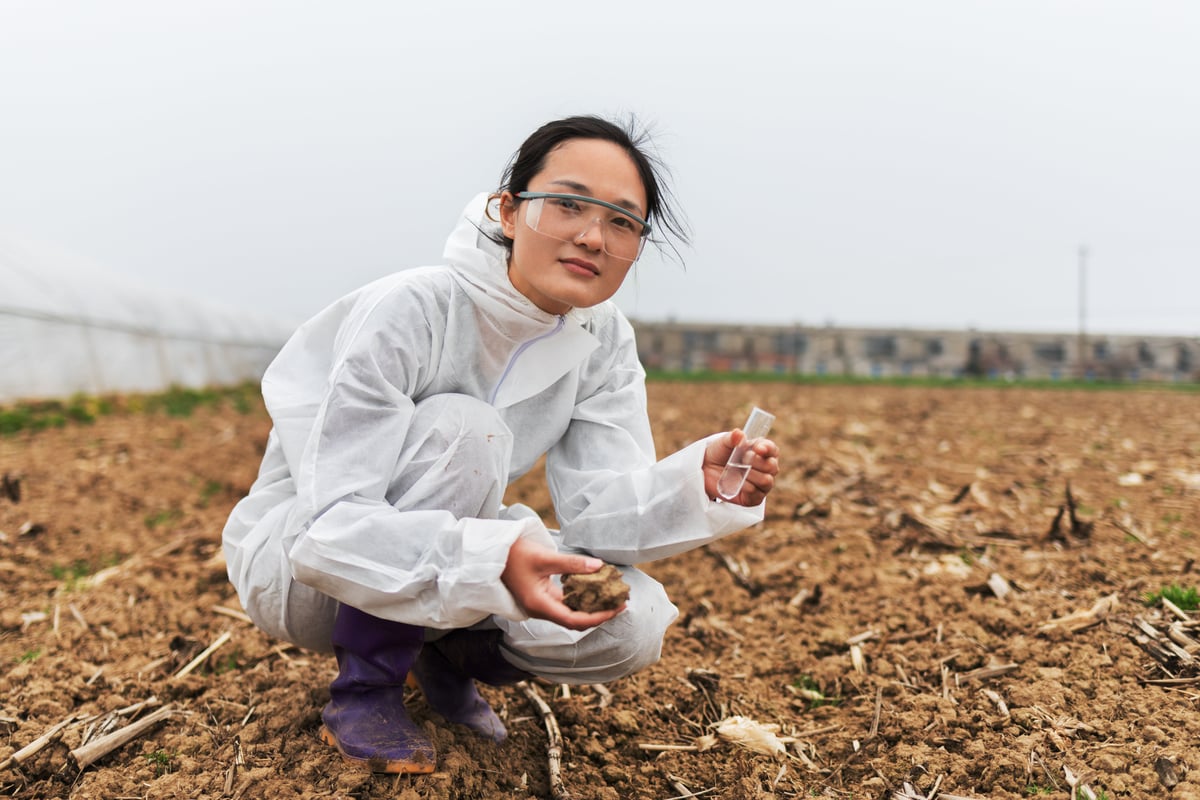 We're in the era of the side-hustle. But it's important to remember not everyone wants or needs to become their own boss. Image: Getty.

There are plenty of benefits of starting your own business - but that doesn't mean there aren't just as many being a part of someone else's business. Working for others, you get a set of responsibilities that are within your expertise, you get paid sick and holiday leave, superannuation is paid by your employer, and if you're not happy - you can resign and move on to something that suits you better. That in itself is a different kind of freedom.

Millie is a creative, and for her, the idea of having to "sell" herself or her product puts her off the entrepreneurial lifestyle.

"I don't like the hustle, it’s too stressful. I’m not a salesperson, so I’d never be able to sell myself or my product in the way I’d want to," she said.

Andi likes being part of a bigger team and enjoys feeling 'supported' by others in her place of work.

"There's a team around me or people I can go to and ask for help because that's what they're there for - and people who can pull me up if things aren't aligned with expectations and who can motivate me. And also people I can learn from who have different skills and experience," she told Mamamia.

If your motivations include the following:

Then being your own boss might be for you (and oh boy, do we have your back. Check out Mia Freedman's Lady StartUp Activation Plan or our LadyStartUp Instagram).

But if that's not you, that doesn't mean you're not ambitious - it might just mean your ambition looks different.

"To avoid feeling guilty about not wanting to start a business when everyone around you seems to be setting up a ’side hustle’ or leaving their job to set up their own entrepreneurial venture, take a step back and assess what makes you happy in your life," advised Jackson.

"The number one thing to understand is the 'career anchor' that holds you steady. If your 'career anchor' is not entrepreneurial/creativity and it's not autonomy, but is more strongly technical/functional or general managerial, then perhaps becoming an entrepreneur will not really make you happy after all," she told Mamamia.

Reply
Upvote
Thank you! I would love Mamamia to include more content about ambitiously working up the career ladder. Podcasts, articles etc- bring it on! I’m not entrepreneurial but love working hard, contributing to my team and getting personal satisfaction and rewards out of my career. Great to see content that doesn’t belittle that mindset.