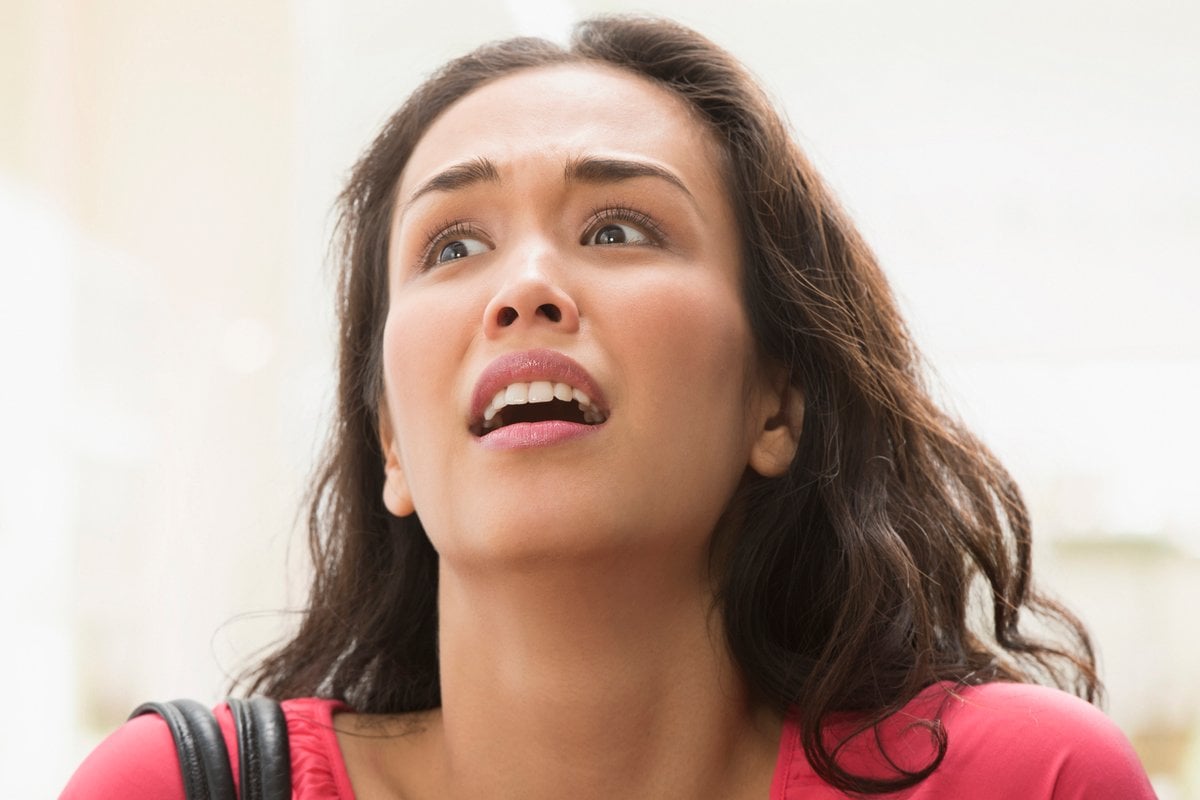 While the stuff on Botched seems pretty bloody insane (*insert the woman who had 15 surgeries to fix her bad nose job*), the fact is that shady cosmetic work is way more common than you might think.

Especially when it comes to injectables.

While muscle/wrinkle relaxants and most dermal fillers are 'Schedule 4 medications' that require prescription by a registered medical practitioner (a doctor), you don't need a medical license to inject them. And how much training you need to complete before performing injectables can be a bit of a grey area.

As you can probably guess, this lack of regulation can lead to some serious issues.

And as cosmetic injectables rise in popularity (FYI fillers and anti-wrinkle injections are part of the top five non-surgical procedures in Australia), so too has the number of botched procedures.

Whether it's due to the lack of research and education, cheap pricing, free treatments for social media posts, or a combination of all the above - we’re starting to fall into some dangerous territory.

Listen to Mamamia's podcast for your face, You Beauty, where we talk about what 'baby Botox' actually is. Post continues below.

To prove just how important it is to see a professional, here are five horror stories from people who have had (or know someone who has had) a bad experience with injectables:

"I went to a 'reputable' salon in Subiaco, Perth, for my filler treatment. I had visited many times before for Botox and a small amount of lip filler with great results. I 'thought' I needed under eye filler, so I went in for a consultation. There was no consult.

"The injector asked if I wanted filler in this area, and I said, "If you think I need it?". I’m very hollow on the outer corner of my orbital rim, however my tear trough area was fine. I had no idea what the procedure entailed or the results. My fault, I know - but she also didn’t offer any information. She was the specialist, so I trusted her.

"While injecting, she told me that some lip filler treatments were getting out of control, and she doesn’t like the look of them. But she said if she doesn’t do these type of treatments, her clients will get it done down the road anyway - so she might as well keep her clients. After she finished I questioned why the outer rim of my eye wasn’t filled, and she then explained that what I was after was not under eye filler and it’s not something she offers.

"Yes, I know this is on me. BUT... then I looked in the mirror and I had two little sausages under my eyes. I could see where it was sitting under the skin. I was told it would settle. It didn’t. It was over-filled, and I had these two little tubes of filler that I could see. I left the clinic with a permanent blue bruise at the sight of injection.

"Five years later and I still have the blue bruise. I have never been back and I cringe every time I see the business recommended. I asked to have the filler dissolved and after already paying $695 for the initial treatment, I couldn’t justify another $700 to have it dissolved. So, I just put up with it until it wore off. I put it down to a learning curve. My next injector told me they were over-filled and by looking at it, they seemed to believe the treatment shouldn’t have been done at all as it wasn’t required to start with."

"I got lip fillers last year and I was originally quite happy with the results. I had been told that they would only last between three to four months, so was excited to 'try it out'.

"I got the treatment done in June 2019 and now at the end of October 2020, my lips are still considerably large and there's that giveaway sign of a 'duck lip' flip on the top lip that goes upwards. I hate the side profile of it and want to go back to my roots and back to basics - AKA my natural lips. I'm all for trying things once, but I think the look of fillers on me aged me years!

"When I went back to the clinic for a consultation, the cosmetic nurse told me that she was 'confused' and 'unsure' why the filler hadn't dissolved naturally. She also told me there's no certainty that dissolving my lips will be symmetrical and it also might dissolve some of my natural lip as well. I was horrified. I have since had them taken out and I'm sticking to natural lips."

"A good friend of mine had anti-wrinkle injections around her eyes to try to get rid of her crow's feet. A few of our mutual friends had had the same procedure, so she thought it would be pretty straightforward. After her treatment, one side of her face had completely dropped, like, it was paralysed - it looked like she had Bell's Palsy. She was terrified.

"She paid to see a cosmetic surgeon and found out that the Botox had been injected incorrectly. She ended up on medication (drops that she had to squeeze on her tongue every day) to try to rectify the issue. She later found out that she wasn't the first patient to experience bad results from this particular injector."

"I had a patient who had gone to a cosmetic clinic to fix her gummy smile. She had anti-wrinkle injections injected into the sides of her nose (an area which controls the muscles in the upper lip). However, the beauty therapist performing the treatment didn't inject the correct muscle. My patient was unable to purse or pucker her lips - she couldn't even drink from a straw."

"I first got my first anti-wrinkle injections when I was 50 and I was absolutely terrified. I started off very slow and only had a tiny bit injected into my forehead to smooth some lines. Afterwards, I thought it looked great - I had minimal bruising, and the results looked very natural. I got a bit braver and started to get a little more each time - however, I didn't realise it was starting to wreak havoc with my eyebrows.

"After one particular treatment, my left eyebrow had completely dropped - like it was paralysed - whilst the right one stayed at the same level. My face was lopsided, and I looked like I was permanently squinting or winking out of one eye. Luckily it was temporary, and the effect only lasted two months. It put me off injectables, though - I haven’t had any for years."

How to prevent this from happening to you.

So, what's the go? How can we find someone we can actually trust when it comes to anti-wrinkle injections and lip fillers?

"Unfortunately, our industry can be seen as taking advantage of body image issues, low self-esteem or mental health concerns. It should in fact be the opposite to this," said dermatologist Dr Cara McDonald from Complete Skin Specialists.

"Like it or not, our genetic makeup determines that how we look affects how we feel. So, if we can safely and effectively use cosmetic treatments to present the 'picture-we-want' to the world, then really it is a continuum of colouring our grey hairs," she adds.

In order to save yourself from any nasty surprises, finding an injector who is going to meet your needs from both the technical and emotional point of view is the key.  However, McDonald said this is not necessarily easy.

Make sure you thoroughly research a person's qualifications and training before booking an appointment, and ask them if you can see some before and after photos so you are familiar with their work. "Expertise comes with time, education, mentoring and support," said McDonald. "Look at the qualifications and extra training your practitioner has had."

McDonald said another great tip is to make sure your practitioner looks at your entire face during your consultation, rather than only being interested in the treatment you are planning to have. So, make a note of this.

"It is very important for practitioners to explore your expectations and rule out reason to avoid having treatment," adds McDonald.

While injectable treatments may be considered a simple procedure, it’s so important to keep in mind that it comes with some serious risks - especially if performed incorrectly. So, you'll also want to cover yourself for the possibility of complications.

"Ask the practitioner who will look after you if you have any concerns or complications. Cosmetic treatments are not without risk, but excellent practitioners will manage their own patients’ problems and/or have a good support network around them if needed," said McDonald.

Last, if you're struggling to find someone you can trust, McDonald said you should ask around and talk to some close friends - because personal recommendations are probably your best bet. "You can’t always trust online reviews - good or bad."

As the old saying goes, you get what you pay for - and having injectables is not something you want to cheap out on. While we all want to save a bit of dosh, going to that dodgy discount spa down the road from your work is just not worth the risk.

To help make sure people understand what they’re getting into and know what they need to ask before committing to a treatment, Dr McDonald has recently launched a new research campaign to explore patients' opinions and experiences in the area of cosmetic injectables.

If you've had anti-wrinkle injections or filler treatments (and whether you've had good or bad experience), you can take part in Dr McDonald's research here.

Do you have a bad experience when it comes to injectables? Share with us in the comment section below.