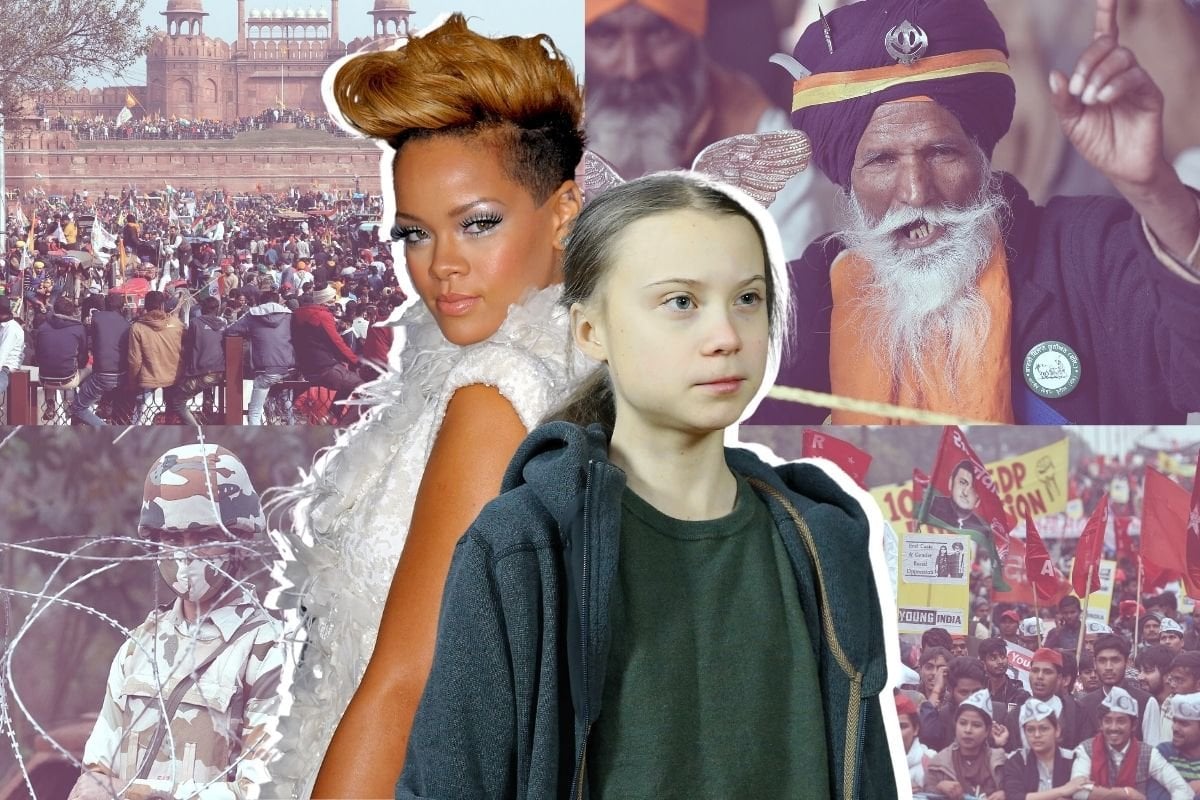 Pop singer Rihanna certainly isn't the start of this story. But because of one tweet, she's managed to single-handedly draw global attention to the plight of farmers in India.

Right now in India, tens of thousands of farmers are protesting against new laws that loosen the rules around the sale, pricing and storage of agriculture produce in the country.

More than half of Indians work on farms, with everyone from children to the elderly joining the demonstrations which have now entered a third month in and around Delhi's borders.

"Why aren't we talking about this?!" she wrote, alongside the hashtag #FarmersProtest.

why aren’t we talking about this?! #FarmersProtest https://t.co/obmIlXhK9S

She linked to a CNN news report about India blocking internet services at the protest sites, a favoured tactic of the Indian government to stifle protests.

Her commentary, albeit brief, went viral. And now she's found herself on the receiving end of criticism from the Indian government itself.

But before we get to the aftermath of Rihanna's tweet, let's look into the background of the protests themselves.

Violence, death and an internet blackout: What exactly is happening in India?

Tens of thousands of farmers have been hunkering down on the fringes of the Indian capital to protest new agricultural laws they say will leave them poorer and at the mercy of corporations.

The laws have been likened to a "death warrant" by farmer groups, who say the reforms will allow big retailers to buy directly from growers putting an end to long-standing guaranteed prices for their crops.

The protests are posing a major challenge to Indian Prime Minister Narendra Modi who has billed the laws as necessary to modernise farming in India.

Modi says the reforms aim to expand market access, provide greater flexibility to farmers and pave the way for more economically and ecologically sustainable farming. The government has offered to keep the laws on hold for 18 months, but protesters want them repealed.

Farmers and their families have camped out on key national highways for weeks on end, often in temperatures dropping to 2-3 degrees celsius. CNN reports more than 147 people have died, with many freezing to death or dying by suicide. Others have died in road accidents near protest sites.

The largely peaceful protests turned violent on January 26, India's Republic Day, when a section of the tens of thousands of farmers riding tractors veered from the protest route agreed with police and swarmed the 17th-century Red Fort in a dramatic escalation. 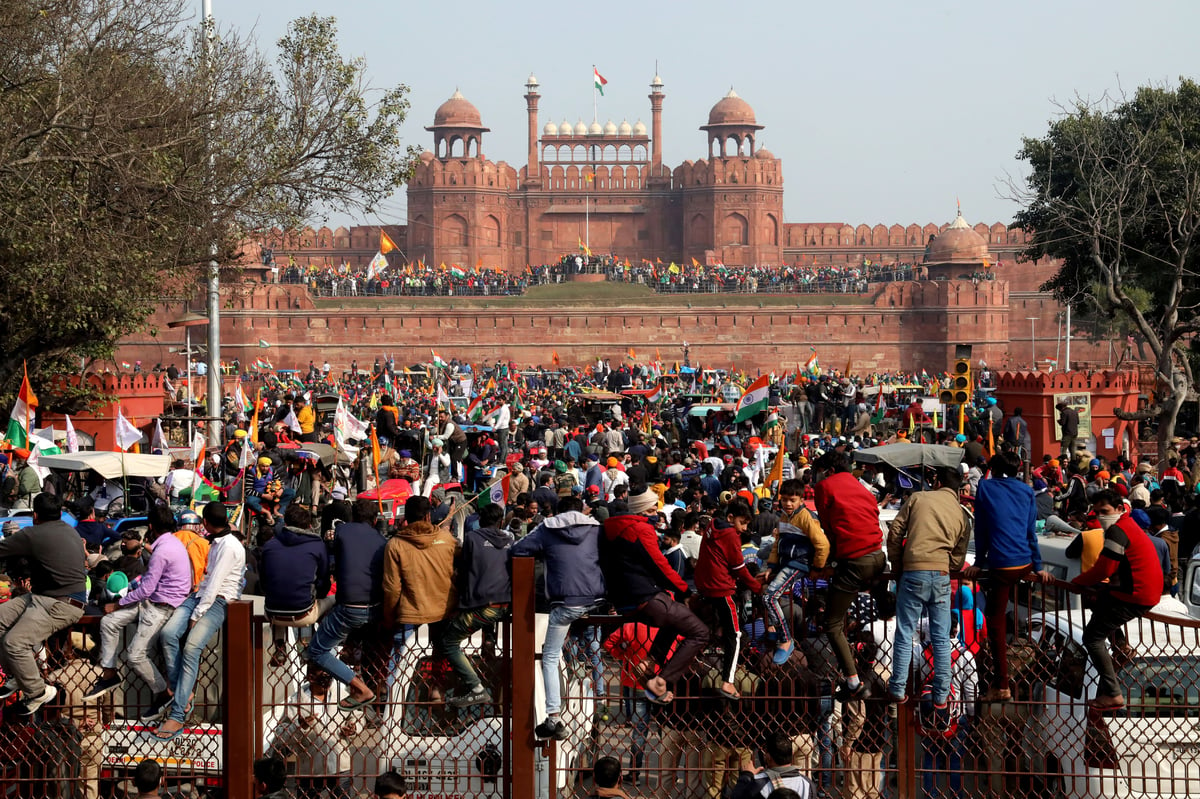 Protesters gathering at the Red Fort during the demonstration. Thousands of farmers from Punjab and Haryana state continue to protest against the central government's new agricultural Laws. Image: Naveen Sharma/SOPA Images/LightRocket/Getty
ADVERTISEMENT

Hundreds of police officers and farmers were injured and a protester died.

Since then, authorities have heavily increased security at protest sites outside New Delhi's border, adding razor wire and steel barricades to stop demonstrating farmers from entering the capital.

The farmers have told the BBC the increased security is "war-like" with police officials blocking roads with large concrete slabs embedded with huge iron nails.

The beefed-up security - called "war-like" by some farmers - comes amid a tense standoff with the government over new agricultural laws.https://t.co/OnmynkFegv

"They install barricading as if this is an international border. We are sitting peacefully on our front and we will remain seated. But if we want to move forward to surround the parliament, these barricades will not stop us," Anoop Chanaut, a member of the Kisan (Farmer) Social Army, told BBC Hindi.

Authorities cut internet to several districts around India's capital over the weekend "in the interest of maintaining public safety and averting public emergency" as farmers in the affected areas staged hunger strikes.

Police have also filed criminal charges against several journalists who covered the protests in Delhi, accusing them of making statements inimical to national integration.

"Is it a crime for media to report statements of relatives of a dead person if they question a post-mortem or police version of the cause of death?" Siddharth Varadarajan, editor-in-chief of The Wire and one of the journalists charged by police, said.

What’s the IPC provision for “malicious prosecution”? Here is the UP Police indulging in it, filing an FIR against me for tweeting about what the grandfather of farmer who was killed in the tractor parade had said on the record! https://t.co/yRMAXtAXKm

Buzzfeed is now reporting India's government has warned Twitter that it must obey its orders to remove “inflammatory content” or employees will face potential jail time.

After initially blocking the accounts, Twitter reversed its decision, saying the tweets constituted free speech and were newsworthy.

But why is India incensed by Rihanna?

It took just one tweet from an international popstar to infuriate the Indian government and supporters of Prime Minister Narendra Modi's party into retaliation.

Senior government ministers, Indian celebrities and even the foreign ministry hit back against Rhianna's comment, which has been liked 800,000 times, urging people to come together and denounce outsiders who try to break the country. 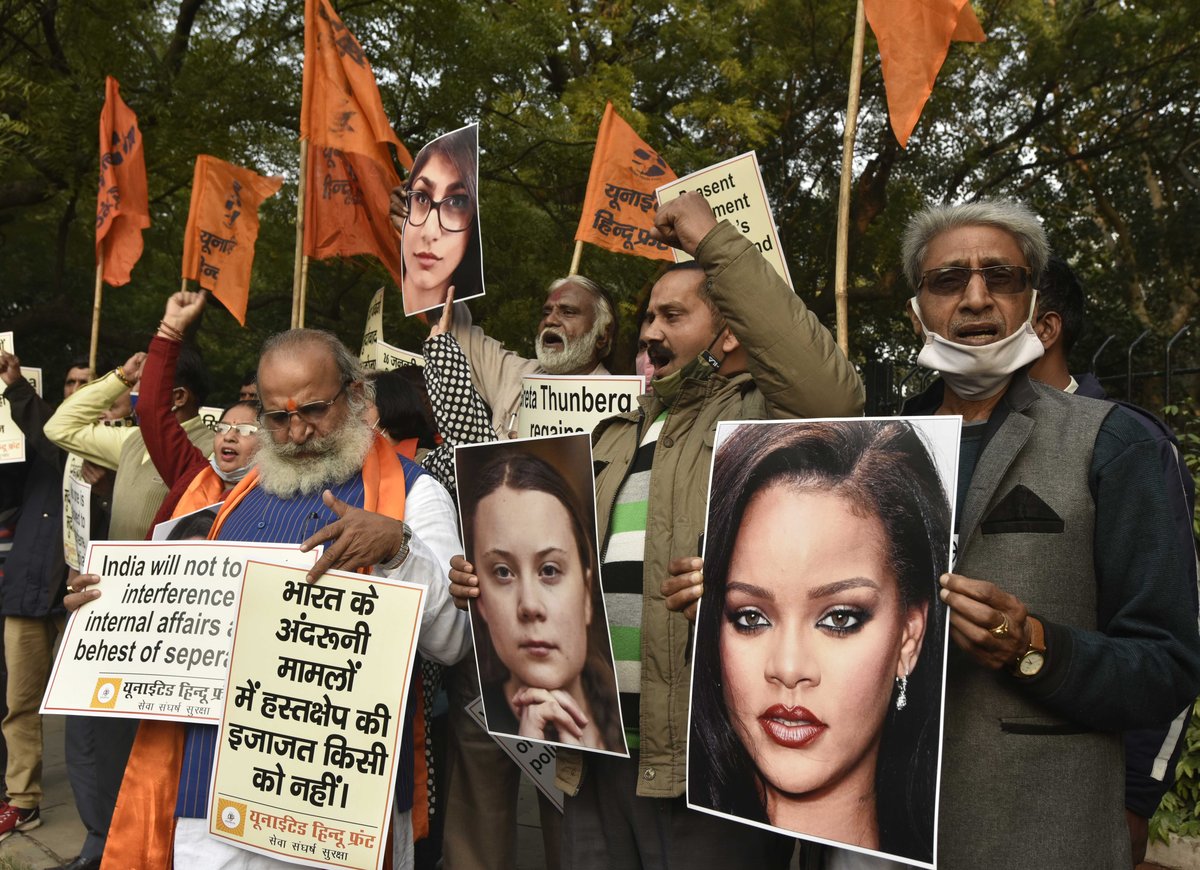 Protestors allege there is a plan at the international level to defame India over the farmers' protest. Image: Sonu Mehta/Hindustan Times/Getty.

"It is unfortunate to see vested-interest groups trying to enforce their agenda on these protests, and derail them," the ministry said on Wednesday.

Teenage climate activist Greta Thunberg, and the niece of US Vice President Kamala Harris, Meena Harris, were among others to tweet their support, with a social-media storm quickly brewing.

I still #StandWithFarmers and support their peaceful protest.
No amount of hate, threats or violations of human rights will ever change that. #FarmersProtest https://t.co/5VwwBSDXu0

Thunberg shared a link to register objections to the new laws in her comments on the protests, with police in Delhi soon after announcing they were investigating whether there was an international campaign to damage India's reputation.

Here’s an updated toolkit by people on the ground in India if you want to help. (They removed their previous document as it was outdated.)#StandWithFarmers #FarmersProtesthttps://t.co/ZGEcMwHUNL

Entertainers and Indian sports stars soon joined in the debate.

They echoed the government's stand on the agriculture laws and asked people outside India not to meddle with their country's affairs.

"India's sovereignty cannot be compromised. External forces can be spectators but not participants. Indians know India and should decide for India. Let's remain united as a nation," wrote cricket legend Sachin Tendulkar.

"No one is talking about it because they are not farmers, they are terrorists who are trying to divide India," she wrote.

No one is talking about it because they are not farmers they are terrorists who are trying to divide India, so that China can take over our vulnerable broken nation and make it a Chinese colony much like USA...
Sit down you fool, we are not selling our nation like you dummies. https://t.co/OIAD5Pa61a

But former Finance Minister P. Chidambaram took a swipe at India's foreign ministry and called its statement a "puerile reaction".

"When will you realise that people concerned with issues of human rights and livelihoods do not recognise national boundaries?", he tweeted.

Indian farmers’ leaders on Wednesday outlined plans to scale up months of protests as their cause gained high-profile supporters in the West, like that from Rihanna.