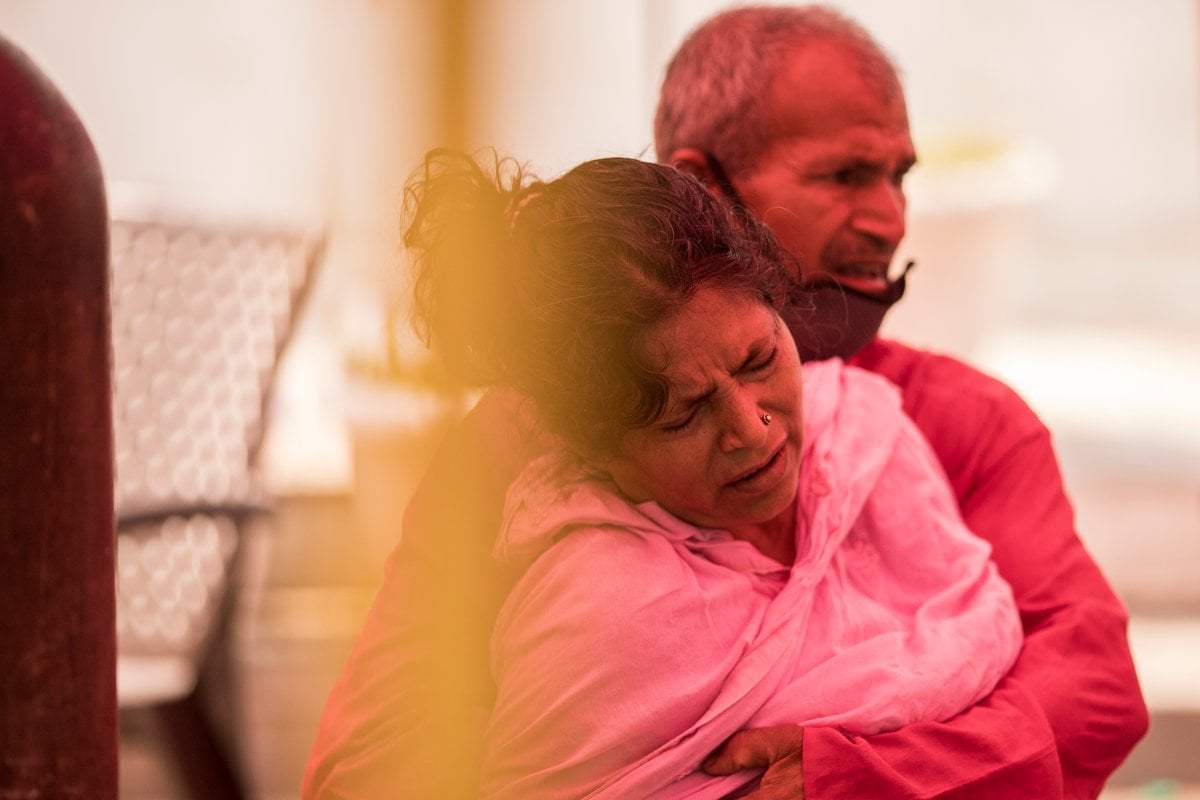 India remains in the midst of the world's worst coronavirus wave, experiencing its deadliest day yet on Sunday. Still, even with the official numbers so catastrophically high, experts predict the death and case numbers are considerably higher than data suggests.

With patients left gasping for air amid a great oxygen shortage, more than 40 countries have promised to send emergency medical supplies.

In the meantime, in Australia, the Morrison Government is facing backlash for introducing massive fines and up to five years behind bars for travellers who come to Australia from India during a temporary pause, with many saying the law is racist. 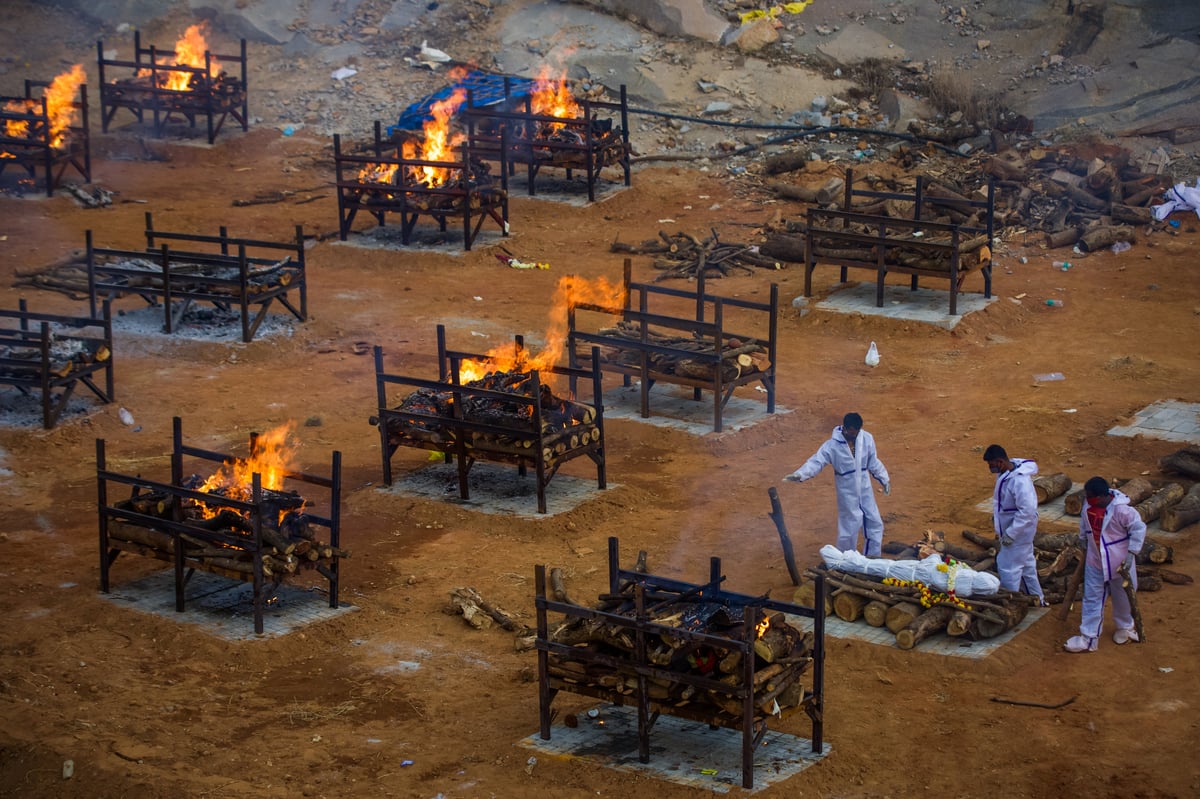 Mass cremations are being held as India recorded their deadliest day yet since the COVID-19 pandemic. Image: Getty.

Here is what you need to know about the latest on India's worsening coronavirus crisis.

India records their deadliest day yet.

On Sunday, India saw its deadliest day of the pandemic yet with 3,689 deaths in a single day, plus 392,488 fresh infections, government data shows. This is the fourth straight day India has recorded over 3,000 deaths.

It comes after it became the first country to cross 400,000 daily cases on Saturday.

In March, India recorded 1.2 million cases and 5,417 deaths. This is compared to April, where the country recorded 6.6 million infections and 45,000 deaths, demonstrating the ferocity of the spread of the virus.

Across the country, mass cremations for victims of COVID-19 are taking place.

Read: ‘I am one of the 9,000 Australians stuck in India. This is what life is like right now.’

Last week, The New York Times and Times of India reported that India's government was ordering social media giants Facebook, Instagram, and Twitter to remove posts that were critical of the government's handling of the pandemic.

The platforms in-part agreed to take down the posts, by ensuring no one using the sites in India could view the content.

One of the tweets not visible to people in India is by Moloy Ghatak, a politician in the opposition-ruled West Bengal state.

"India will never forgive PM [Narendra Modi] for underplaying the corona situation in the country and letting so many people die due to mismanagement," the tweet, now restricted in India, reads.

India will never forgive PM @narendramodi for underplaying the corona situation in the country and letting so many people die due to mismanagement.
At a time when India is going through a health crisis,PM chose to export millions of vaccine to other nations #ModiHataoDeshBachao pic.twitter.com/5sQRfT7kpB

According to NYT, other content being censored in India include gruesome photos of dead people. India's government released a statement defending its actions, saying the content targeted created “panic about the Covid-19 situation in India by using unrelated, old and out of the context images or visuals.”

One woman living in India at the moment tells Mamamia that what she hears from outlets in India is very different to what she sees outside her house.

"There are dead bodies lying on the side of the roads and there's no place to bury them. People are struggling to get oxygen. But in the news, they say everything is running smooth, everything is okay and everything is fine. But it's not. The reality is totally different," she explains.

The censorship has sparked international concern for the world's biggest democracy. 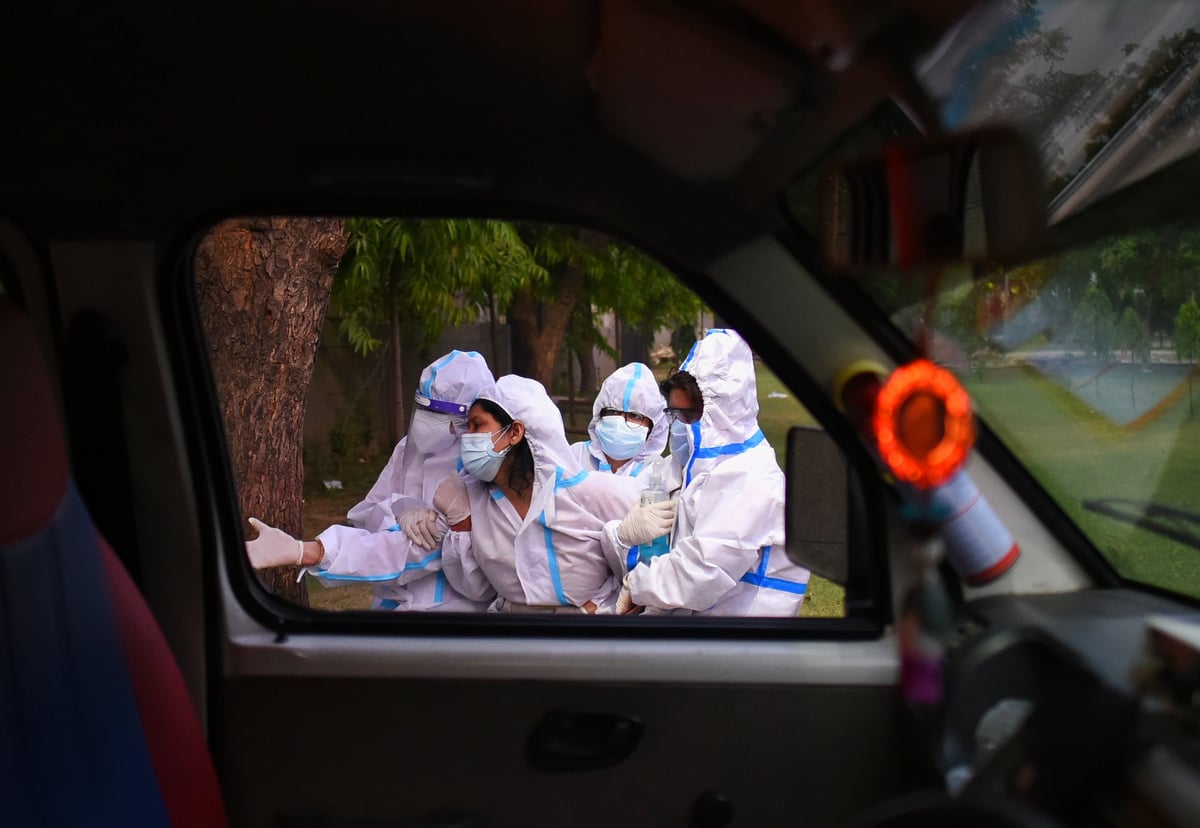 Relatives of a person who died due to Covid-19 reacting during their last rites at Sarai Kale Khan cremation, on April 26, 2021 in New Delhi, India. Image: Getty.

On Saturday, India was due to open vaccinations for all those above 18 years old, however only a handful of states were able to deliver the jabs due to a mass shortage of vaccines.

Despite being among the world's leading producer of vaccines, India, with a huge population of about 1.4 billion, has run short and also placed a temporary hold on exports to meet the domestic demands.

Epidemiologists have been calling on Western countries, where vaccinations are continuing apace, to share their vaccines to prevent the development of new coronavirus strains from surging infections. 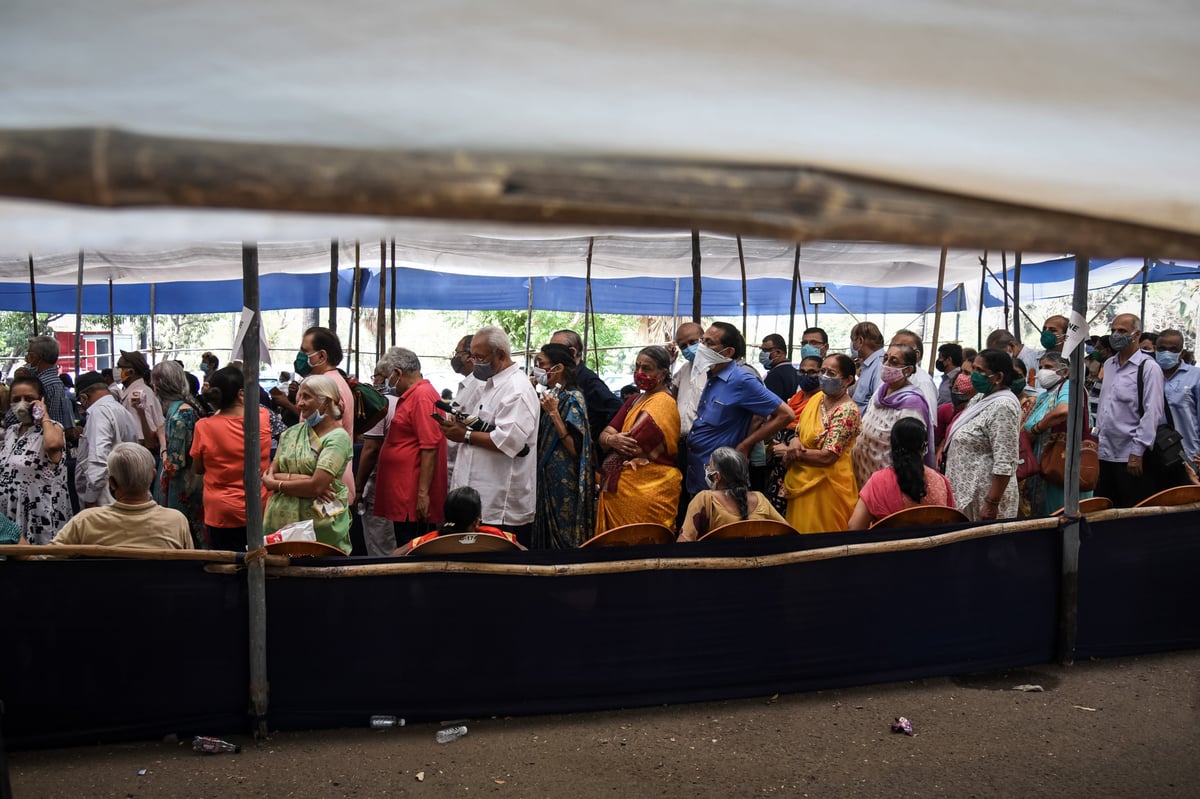 People line up to receive their Covid-19 vaccines at a mass vaccination centre on April 29, 2021 in Mumbai, India. Image: Getty.

On Saturday, Health Minister Greg Hunt announced that Aussies could face hefty fines and jail time if they breach the temporary travel ban for people trying to return home from India.

Hunt said the new measures come into effect on Monday and will be reviewed on May 15.

Under the Biosecurity Act, the maximum penalty for breaching the ban is a five-year jail sentence or a $66,000 fine.

The Australian Human Rights Commission has asked the government to prove that its decision to fine or jail Australians is "not discriminatory," considering such measures where not introduced when America and England were experiencing catastrophic waves.

On Sunday, Foreign Minister Marise Payne rejected any suggestion that blocking travellers from India is racist.

S
skamd a year ago

Reply
Upvote
10 upvotes
I am beyond grateful we have a government that is protecting us by closing borders.  I think you will find the majority of the population feel the same.
G
gypsy a year ago

Reply
Upvote
6 upvotes
This topic was being discussed the other  day. There are a substantial amount of people that make a life away from Australia but suddenly want to return home when things take a bad turn.  There has been enough to organise within Australia with the repercussions of a pandemic but there is this neverending pressure coming from people that chose to work and reside outside of Australia. Those Australians have often been overseas for years paying tax in another country not contributing to Australia at all but suddenly decide they would be safer back home. I think people have to live with their choices.  Also, I don’t
think the cricketers needed to go to India, it is only sport I feel that could have been put on the back burner. Some of the movement is unnecessary.
D
daijobou a year ago

Reply
Upvote
2 upvotes
@gypsy I guess I don’t understand the point of it, just banning them for a few weeks and then business as normal? I could understand if the Feds decided they needed a few weeks to sort out quarantine arrangements as current arrangements are not fit for purpose, but that’s not what this is about. This is the action of a useless government who has passed on ALL responsibility for the quarantine during this year long pandemic and they are just trying to go for a popular vote. Don’t fall for it.
G
gypsy a year ago

Reply
Upvote
1 upvotes
@daijobou  I get what you are saying but you may find if India gets worse he may not end the ban.  I am no Morrison fan I can assure you but the whole way through this virus I am inclined to take a hard line. I think he has buck passed with quarantine and the Federal government should have used Xmas island type of facility. As the QLD premier said, ages ago, hotels were designed for travellers  not quarantine. I think we have been misled, also, re border closures  there seems to be a lot of movement and I don’t trust it has all been truly necessary movement. What I am adamant about is Australia has to be protected, it can get out of hand quickly.
D
daijobou a year ago

Reply
Upvote
@gypsy agree with taking a hard line, but remember this is a Government who supporter a private citizen’s legal action against a State government’s decision to close borders. They will wait for the outrage to pass, open up again and then blame the States if it gets out of hand.
G
gypsy a year ago

Reply
Upvote
1 upvotes
@daijobou  Oh agreed,  he never takes responsibility for anything. He is a bumbling idiot and many are bluffed by him which is very concerning.  Australia has sacrificed a lot and we now have a HUGE debt,  I would hate it to all be for nothing because the virus got a grip on us anyway. This is not over by a long shot.
News
General
Opinion
True Crime
Politics
Sport
Explainer
Entertainment
Celebrity
Reality TV
Movies
TV
Books
Rogue
Royal
Lifestyle
Beauty
Fashion
Weddings
Home
Wellness
Health
Fitness
Travel
Food
Family
Before The Bump
Pregnancy
Baby
Kids
Teens
School
Parent Opinion
Work & Money
Money
Finance
Career
Lady Startup
Relationships
Sex
Dating
Separation
Friendship
Family
Real Life
Couples