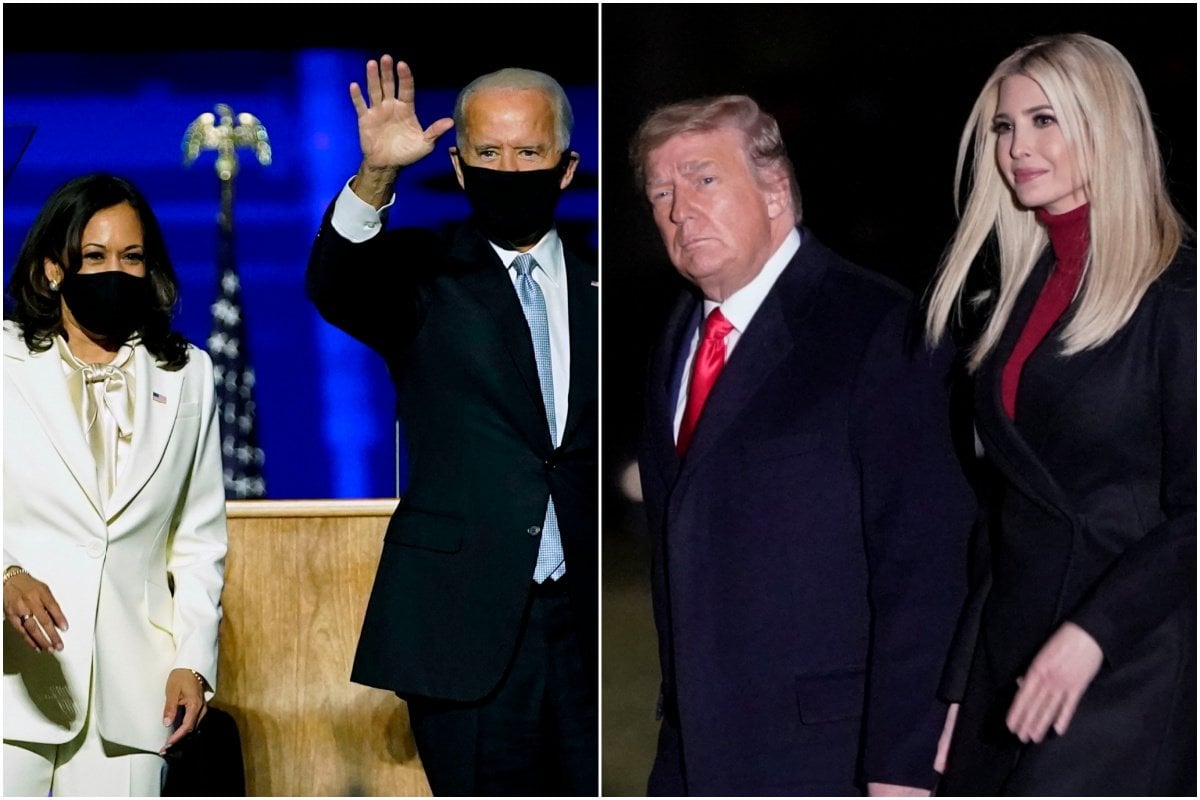 US President-elect Joe Biden is exactly one week away from the inauguration ceremony that will see him sworn in as the 46th President of the United States.

But in the aftermath of last week's deadly Capitol Hill riot, tensions are high, with many fearing the events of January 6 are just the pre-game for what could occur on January 20.

As Congress voted to certify the November US election results on Wednesday, a pro-Trump rally turned violent as rioters breached the threshold of the Capitol grounds in an effort to disrupt the democratic process.

WATCH: Biden was asked if he cared if Trump attends his inauguration. Post continues after video.

Video via A Late Show.

Five people died, including a US Capitol police officer, and lawmakers were forced into lockdown as trespassers looted offices, waved Confederate flags and destroyed property, all while declaring that Donald Trump was the real winner of the "stolen election".

As Biden and Vice President-elect Kamala Harris prepare to relieve Trump of his role after just one term - while an impeachment attempts to remove him from office even earlier, here's what's going on around them as they prepare for the job of a lifetime.

The FBI is preparing for armed protests in all 50 states.

The Federal Bureau of Investigations (FBI) has briefed members of Congress on the potential for armed protests in all 50 state capitals and Washington DC.

DC Mayor Muriel Bowser has issued a state of emergency order for the city and is urging Americans to stay home on January 20 to "protect the District of Columbia from a repeat of the violent insurrection experienced at the Capitol and its grounds on January the 6th."

Please plan to participate in #Inauguration2021 virtually and do not travel to Washington, DC https://t.co/DTCLUMdgDA

Public access will be very limited to the event next week as security is ramped up, and tourists are barred from visiting the Washington Monument until January 24.

Anti-scale fencing has been erected and 10,000 armed National Guard troops will be on duty alongside local law enforcement by the weekend.

ABC News has obtained access to an internal FBI bulletin that has received information on a group calling for "storming" of state, local and federal government courthouses if President Donald Trump is removed from office ahead of Inauguration Day.

In light of an FBI warning that of possible armed protests at all 50 state capitals leading up to inauguration day, Wisconsin is boarding up the windows of the state legislature and Ohio is mobilizing the national guard

"The FBI received information about an identified armed group intending to travel to Washington, DC on 16 January. They have warned that if Congress attempts to remove POTUS via the 25th Amendment, a huge uprising will occur," the FBI bulletin reportedly read.

They've caught wind of a potential protest in honour of Ashli Babbitt, the woman killed while trying to climb into the Speaker’s Lobby during the siege of the Capitol.

Even more worrying is the threat of insurrectionists forming a perimeter around the Capitol, the White House and the Supreme Court, and then blocking Democrats from entering the Capitol, so that Republicans can take control of the government, reports the Huffington Post. 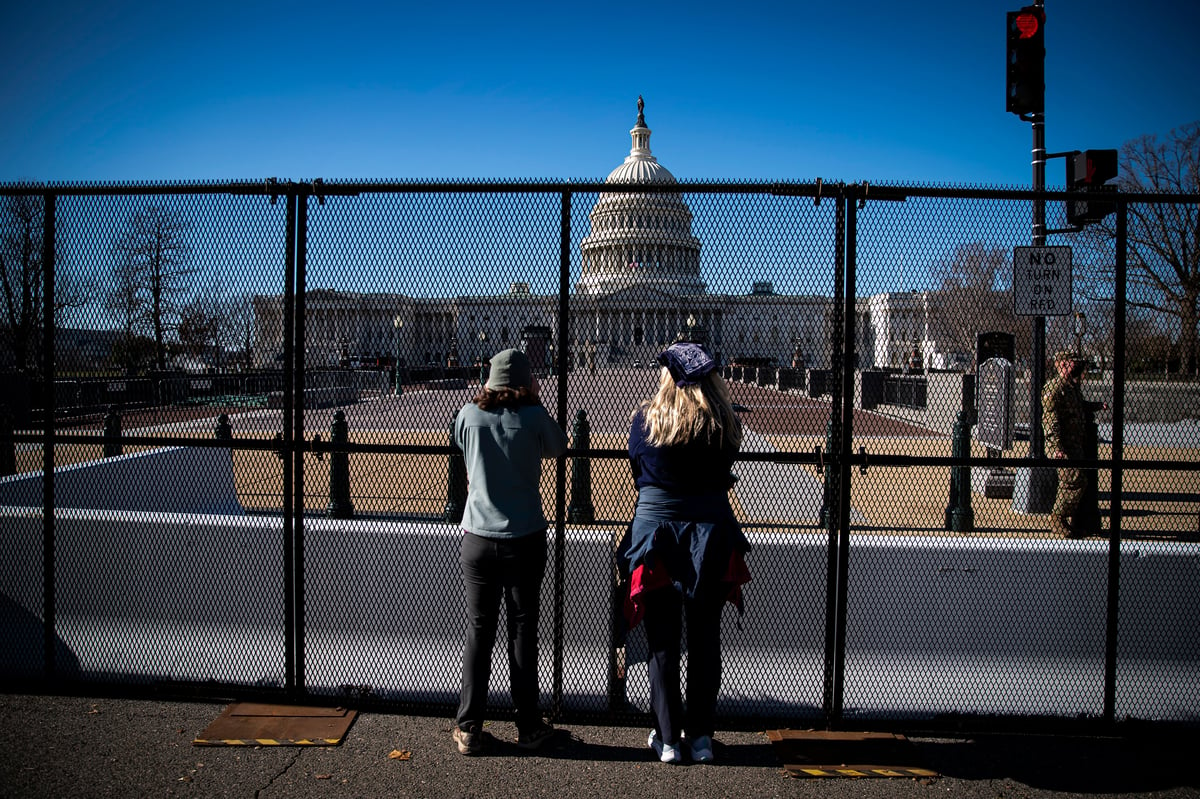 Security fencing has been put up around the Capitol in Washington, DC after a pro-Trump mob stormed it on January 6 as Congress held a joint session to ratify President-elect Joe Biden's 306-232 Electoral College win over President Donald Trump. Image: Al Drago/Getty.

The day will look different to previous years.

Usually on Inauguration Day, hundreds of thousands of people would gather to watch the new president take the oath of office, which is followed by a parade and an inaugural ball.

This year, thanks in part to COVID-19, as well as the increased threat of violence, the event will be much smaller. A virtual parade will take the place of a traditional one and the ball has been cancelled altogether.

CNN reports that Biden will arrive at the nation's capital the same way he did for decades as a senator: the Amtrak train. 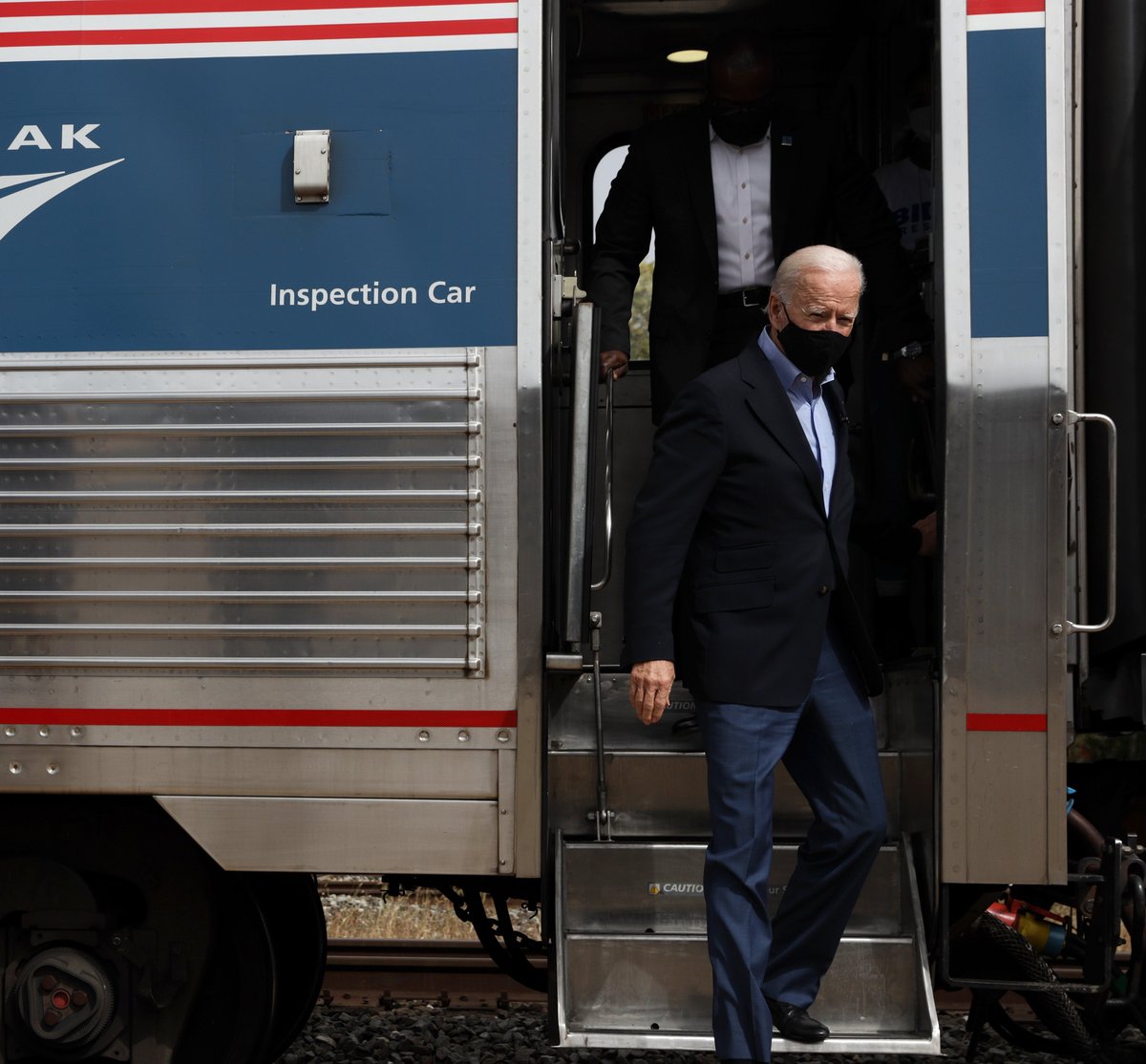 Biden has plans to arrive on January 20 via train. Image: Alex Wong/Getty.

He will be sworn in at midday, and despite the growing fears of rioters returning, the incoming president declared on Monday that he was "not afraid to take the oath outside."

The theme for the event will be "America United" and will be similar in format and style to the virtual Democratic National Convention.

Biden is urging Americans not to gather in Washington DC on the day, with only 1000 ticketed members of the public being encouraged to gather alongside members of Congress, Supreme Court justices, high-ranking military officers, former presidents, living Medal of Honor recipients, and other dignitaries.

By way of comparison, two million people gathered for Barack Obama's inauguration in 2009, while approximately 600,000 gathered for Donald Trump's ceremony in 2017. 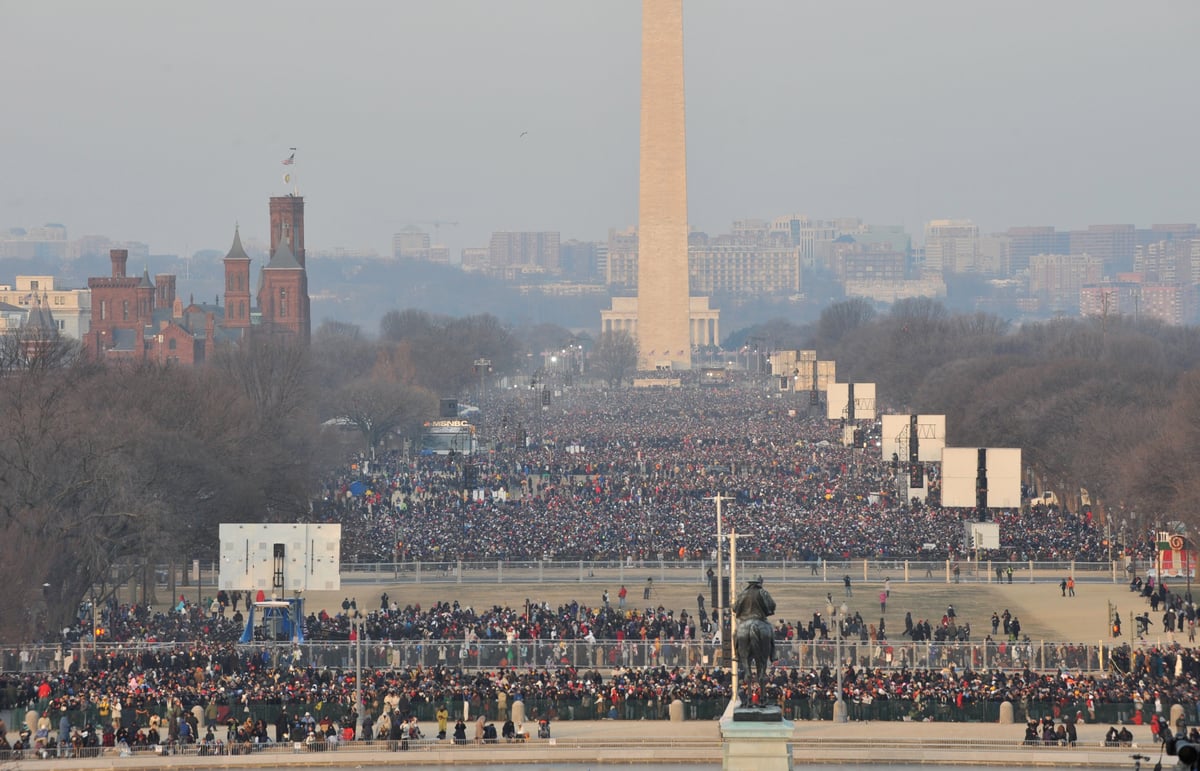 Ivanka Trump is reportedly feuding with her dad over attending.

Trump has confirmed that he will not be attending Biden's inauguration, breaking with more than 150 years of tradition.

In a tweet posted on Friday, Trump said, "To all of those who have asked, I will not be going to the Inauguration on January 20th".

Biden said he was just fine with that, calling it "one of the few things we have ever agreed on".

"It's a good thing him not showing up," Biden said in a press conference, calling the president an "embarrassment" to the nation and unworthy of the office.

Vice President Mike Pence, who defied Trump on Wednesday when he refused to intervene in the congressional process to certify Biden's win, is expected to attend the inauguration. So to is Trump's daughter Ivanka, who according to a Daily Mail source wants to appear like a good sport, and "is worried that her promising political career is in jeopardy and she's doing whatever she can to save her reputation."

According to the source Trump is "furious" at his daughter's plan and has told her it will cost her "thousands of supporters and would be the worst decision she could ever make." 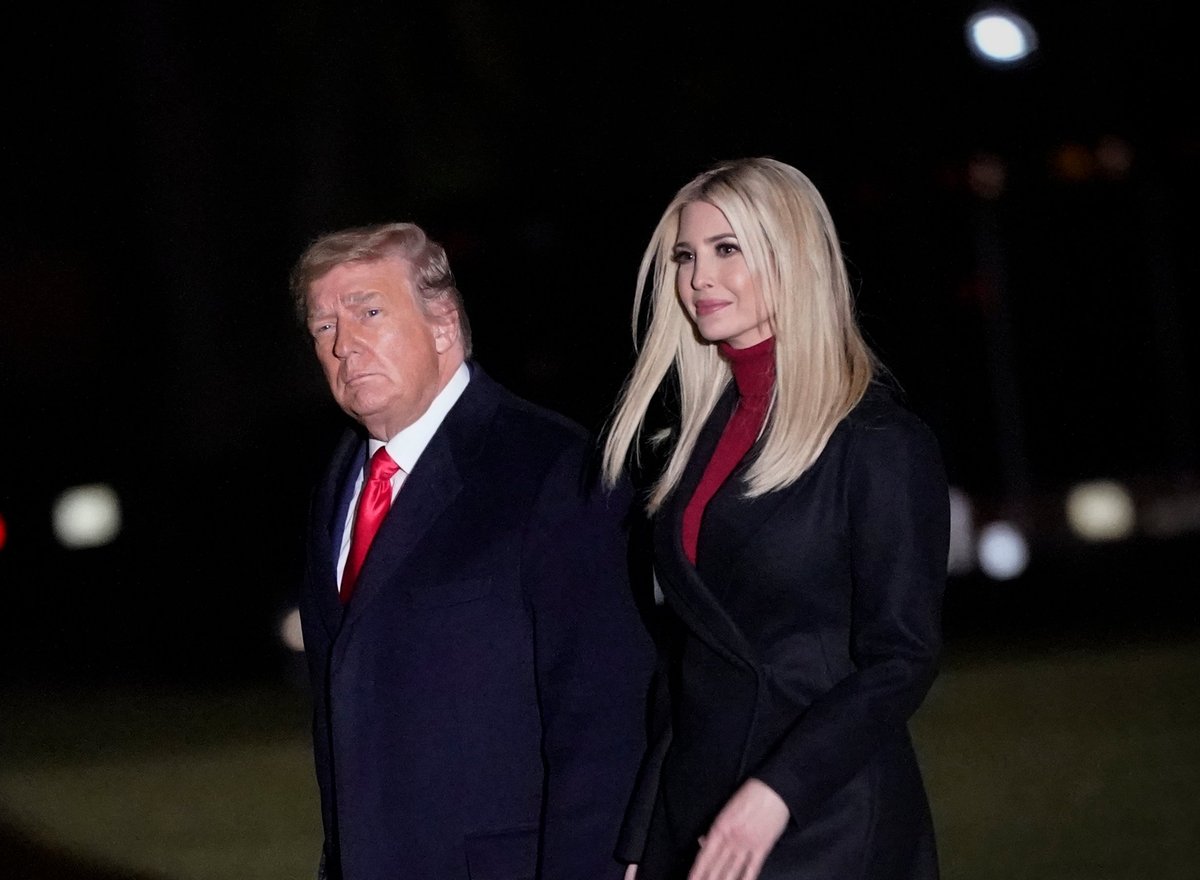 7News reports first lady Melania Trump is joining her husband in leaving Washington the day before the inauguration for their Mar-a-Lago estate in Florida.

Trump finally acknowledged Biden as the winner of the election with just 12 days left in his term, and said he'd peacefully leave after Congress affirmed his defeat.

President Trump is currently being impeached for "incitement of insurrection" in relation to the Capitol Hill riots.

The bill concludes that Trump should be barred from holding public office ever again.

D
david s a year ago

Reply
Upvote
1 upvotes
Ivanka may want to make a run, but she hasn't got a chance. She may be her father's favoured child and think that gives her an advantage, but she's married to a Jew. Maybe if Jared dishes on the global conspiracy that he's seen glimpses of from the inside, but I can't see him doing that, given that he went to all that trouble to get a pardon for his father.
R
rush a year ago

Reply
Upvote
Honestly, the idea of Biden being sworn in outside kinda worries me right now. After the year that's passed and the recent events at the Capitol, it feels like a big risk to me.
C
cat a year ago

Reply
Upvote
@rush the inauguration is managed by the Secret Service, so I think it will be fine. It was the Capitol Police who totally screwed up the other day. FBI will be able to vet anyone coming inside the fences, and they’ll clear all the buildings around for snipers. The biggest threat is probably from Covid and the republican officials in attendance, but they can’t exactly keep the President away from all Republicans.
R
rush a year ago

Reply
Upvote
@cat i hope you're right, but I think I'm at the point now where I'm not ruling out the possibility of anything ever again.
C
cat a year ago

Reply
Upvote
1 upvotes
@rush fair enough. I’m more concerned about a spike in hate crimes in Trump states as his followers lash out.
R
random dude a year ago