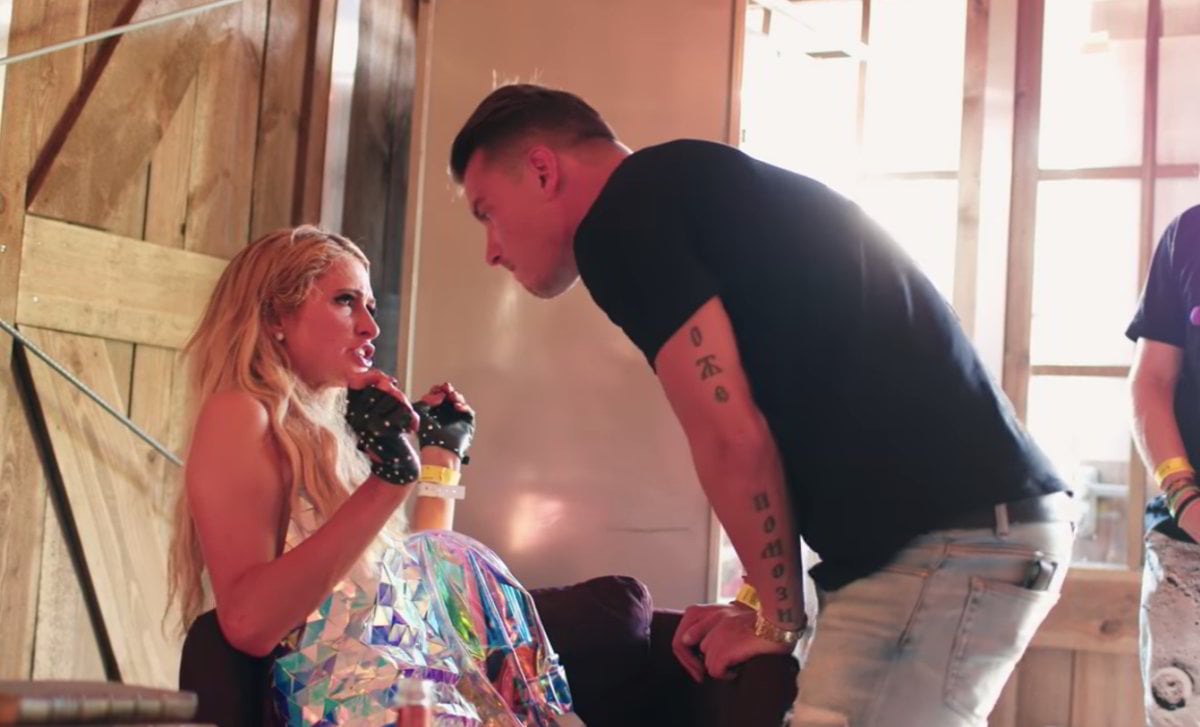 Warning: This post deals with topics related to physical and emotional abuse and may be triggering for some readers.

When I sat down to watch This Is Paris, a documentary that follows the untold true story of socialite and heiress Paris Hilton, I thought I was in for some Keeping Up With The Kardashians-style television on steroids.

What I wasn’t expecting was to see Paris face a struggle that so many of us have lived through but don’t often talk about: toxic and sometimes even abusive relationships.

One four and a half minute scene was particularly triggering.

It gives an uncomfortable look into an argument Paris had with her now ex-boyfriend Aleks Novakovic just before playing a DJ set at the Tomorrowland festival in Belgium in 2019.

Watch: The trailer for This Is Paris. Post continues below.

It’s a scene that’s disturbing, confronting and triggering - no doubt for Paris herself, as well as anyone who has ever suffered through something similar.

“She did not ask me to change another second of footage,” Dean told US Weekly.

“I told her, ‘Ultimately, I think you’re gonna want to include that because that’s who you are. That’s you laying down the law and deciding where your boundaries are. People should see that.’ Eventually, she agreed.”

It starts by showing Paris keen to wrap up a round of press so she can focus solely on her set. She answers all the interviewers’ questions, says all the right things and smiles for the photos. When she returns to her waiting room and is preparing to be called to the stage, Aleks is clearly annoyed at her.

“Please don’t stress me out, I’m obviously nervous as it is,” Paris tells him.

“No babe, I won’t stress you out but you left me five times today,” he responds.

This was the first red flag. The neediness and the clinginess. The jealousy. The need for attention when Paris was clearly preparing for a milestone moment in her career. The need for Aleks to have the focus on him because it wasn’t his moment, but he needed a way to make it about him.

Paris explains that she had nine interviews and then met with a new female artist. That she will never say no to her work commitments, which is the reason she’s been in the industry for 20 years.

“Even if you’re right, if I say no, you don’t have to do it. That’s what you promised me. You do more for them than for me,” Aleks says.

Red flag number two. Alienating Paris by trying to take her away from what’s important to her, her work. Controlling her by stating he has the final call in the decision-making process. Accusing her of breaking a promise and in turn, his trust. Resenting the fact that she didn’t choose to blow off her responsibilities to be with him instead.

Aleks tells Paris he will take her laptop. It has her set on it and she was already scared about losing the file. She says she hasn’t had time to prepare her set because they have been fighting the whole time. Paris is called to the stage and Aleks closes the laptop, dropping it on the floor. It’s unclear if this was on purpose or indeed an accident.

“Nothing happened!” Aleks immediately defends himself.

Paris grabs the laptop and hands it to a crew member.

Red flag number three. Threatening to leave and forcing Paris into a situation where she has to choose. Chase after him, giving him all of the power in the situation. Telling him that he has won. Or go and do her set. Making her feel helpless, trapped, frustrated.

“I’m playing in six minutes! He’s so insecure. Stop! Are you really doing that before my set? Then never speak to me again. Tell him to chill the f*ck out. Stop! Please stop. I love you. Please stop, please stop. I’m begging you STOP. I start in four minutes. PLEASE. I start in three minutes do not ruin my set,” Paris cries.

Red flag number four. Seeing he can’t pull Paris away, Aleks returns to continue to torment her. To sabotage her. To ruin her set and hijack her moment.

“Please, please I’m going to start crying. Please. Please. Jesus Christ,” Paris says through a broken voice as she stands at the edge of the stage about to go on while Aleks continues to taunt her. “My God, are you f*cking psychotic? I’m playing the biggest festival of my life.”

Red flag number five. At a moment when Paris is grasping for support, security and assurance, he pushes her over the edge and into the oblivion of fear and self-doubt. In the moment she is asking him to build her up, he completely tears her down. All with very few words, simply through a total lack of empathy and understanding. Otherwise known as narcissistic behaviour.

“Give me a f*cking kiss right now, don’t be like that,” Aleks demands as her grabs Paris’ face. “Stop,” Paris replies. Aleks blames his behaviour on Paris. “I did this?” Paris asks in shock. “Because of you,” Aleks says.

Red flag number six. Aleks gets physical, treating Paris like an item that he owns instead of a person. He then completely gaslights her. Blaming all of his disgusting behaviour on her. Telling her that he did nothing wrong and that it was all her fault, refusing to take responsibility for his actions and making Paris the problem.

Paris has finally had enough. She’s at the end of her rope and it has snapped. “Get the f*ck out of here. Get out. Give me your bracelets. I’m f*cking done. I want him gone,” Paris says as Aleks is escorted away and put into a van.

I recognise all of these behaviours because I’ve lived with them too, I lived with them for far too long. It’s a scene that left me feeling deeply uncomfortable because it brought back the trauma that I faced many years ago. Trauma that for a long time I felt embarrassed about, like it was somehow my fault. But it wasn’t. None of it was my fault and it wasn’t Paris’ fault either.

It’s also with the benefit of hindsight that you can truly call out a situation for what it is. I always thought I would recognise toxic behaviour in a relationship and stand up to it. The truly scary part is that you often can’t until after it’s happened to you, no matter how familiar you are with the warning signs. Particularly when the behaviour ever so gradually escalates over a period of years until one day you wonder how you got there.

Paris puts on her mask. The one that we all know and are used to seeing. The ‘cool girl’ mask. The ‘I’m fine’ mask. The ‘nothing happened’ mask. She goes on stage, plays her set and waves her hands in the air and jumps up and down. She blows kisses and smiles. She points at people in the crowd. She acts like absolutely nothing has happened.

Back in her LA home, Paris then reveals piles and piles of discarded laptops. Explaining that every time she breaks up with a boyfriend, she buys a new computer because they either scream at her, threaten her or demand her password. Paris goes on to share that she has been in five relationships that she would consider abusive.

“I’ve been in a lot of relationships where people just get so controlling and so angry, that they become physical,” Paris says. She counts how many under her breath: “One, four, five.”

“Five guys,” she says, before detailing another altercation with an unnamed ex-boyfriend that left her arms covered in bruises.

“We just got into an argument. I was trying to leave his house, he just got really mad. Grabbing me and pulling me. I don’t really remember most of it because I’ve had worse stuff happen. Being strangled. Phones thrown at me, computers,” she says.

“I almost accepted it because I thought it was normal. I thought, he loves me so much that he’s going this crazy and I just wanted love so bad. I was willing to accept being hit or yelled at or screamed at or strangled. A lot of things.”

As uncomfortable as these revelations made me feel, I’m so grateful they were aired.

The mask that Paris put on while playing at Tomorrowland is one that so many wear every single day. Paris showed us behind it. And for the sake of someone you might know or even someone you might not, it’s time more of us did it too.

Reply
Upvote
1 upvotes
I've tried to watch This is Paris all the way through three times now - I've done so mainly due to the reviews saying that there is more to her than what we've always seen. After getting three quarters of the way through however, she still comes across incredibly removed from the real world, extremely entitled and unaware of how the rest of us live. I saved for a whole year to afford a MacBook Pro back in 2011 and yet here's Paris lamenting the fact that she has to buy a new computer each time she gets a new boyfriend...she literally has a huge stack of them that have either been broken or discarded for a newer model. She's also not happy because she hasn't made 1 billion dollars yet and 'just wants to feel secure'. Regardless of any pain or loneliness she's experienced, I still don't see a woman that the average person could relate to. I didn't see any hint of the so called genius or intelligence her Mother says she possesses and I also didn't see her show any empathy or compassion for anybody else outside of her shallow bubble. I've never been a fan though and I definitely  wasn't converted after watching her act pretty much how I expected her to.
beachhouse84 7 months ago