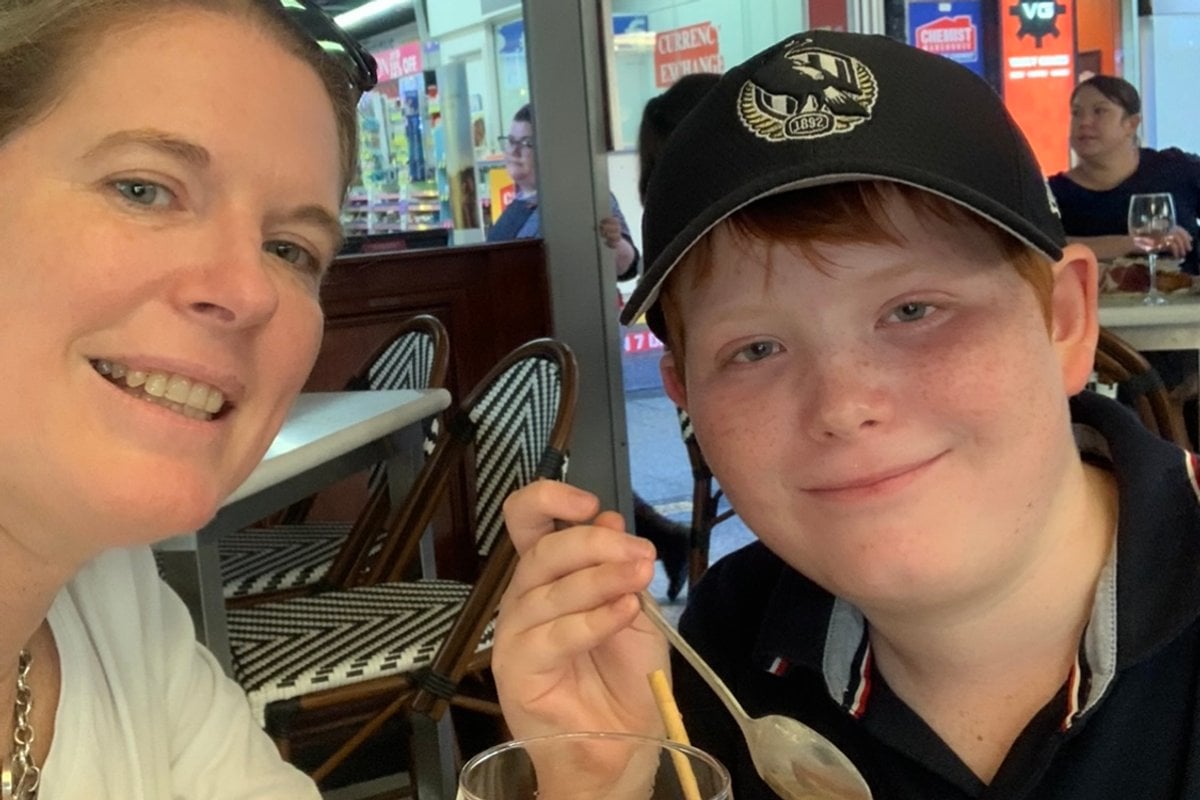 Getting a hysterectomy at 41 wasn’t in my life plan. So how did I get here?

I’d always had heavy periods and bad period pain for as long as I could remember. But during my 20s and some of my 30s, they were kept under control by being on the pill.

When I was about 34, I had to stop oral contraceptives due to a series of severe migraine episodes and that’s when the heavy periods really started to cause problems.

For a couple of years, I simply put up with it – maybe it was normal? For at least three days of my period, the blood loss was extreme.

I had to change tampons at least every two hours, I also had to wear pads and black pants to feel 'safe' from any accidents, and it was estimated I was losing up to 500ml of blood.

On top of this, I was constantly popping painkillers to deal with the severe cramping and lower back pain.

By age 38, after unsuccessfully trying to fall pregnant for about two years, having fallen easily pregnant with my first child, we started to look into fertility options. I started having regular scans and found out I had a large fibroid in my uterus, measuring around 8cm.

When she was reviewing my scans, my doctor asked if the fibroid was causing heavy periods. "YES!" I said, and it turned out there was medication I could take for that.

This worked okay to reduce the bleeding, but I still had two to three days of my cycle where I needed to use two forms of protection. Thank God for the invention of period underwear!

My doctor started sending me for six monthly scans to monitor the fibroid’s growth. It was growing about 1 to 2cm a year and had increased to about 10cm.

By the age of 40, the medication had lost its effectiveness.

I estimated that I was losing between one to two litres of blood each period. I was also having intermittent bleeding if I exercised or rode my horse, which was most days, which meant there pretty much wasn’t a single day that I didn’t have to wear some kind of protection. Wearing any kind of white clothing was a long distant memory.

As well as the bleeding, I had started to notice that my pants were always a bit tight and hard to do up. I always looked slightly pregnant or very bloated all the time.

No matter how much I exercised or how many sit-ups I did, it didn’t change. The scans showed that the fibroid was roughly the size of a six-month pregnancy.

It was starting to take up the space of my other organs, particularly my bladder, and was giving me regular lower back pain.

My doctor referred me to my OB-GYN who had delivered my son via c-section.

We spent about eight months trialling medications that would reduce the bleeding, but not the size of the fibroid.

Unfortunately, the medication didn’t work. In fact, it increased the bleeding. At the highest dose we trialled, after having no bleeding for about six weeks, I had a very heavy period that lasted three months.

My OB-GYN did an investigative hysteroscopy to confirm that the fibroid wasn’t cancerous and to see if they could remove up to about 5cm of it which wasn’t possible as the fibroid was growing into the wall and outside of the uterus.

As I was about 10 years away from menopause (which causes fibroids to shrink) and it was still growing, it needed to come out. This left me with the option of a hysterectomy, keeping the ovaries intact so that I didn’t go into early menopause.

Thank God I had private health insurance. From decision time to operation took only one-and-a-half months, and I was able to choose my surgeon (my OB-GYN who I completed trusted after my c-section). All up, after rebates, I ended up about $3,000 out of pocket.

I did second guess myself before the surgery. Did I really need it, or should I just soldier on? However, thinking back to the three-month period usually put this second guessing to rest.

After the surgery (which took about two-and-a-half hours), my OB-GYN told me that the fibroid was very large weighing 800gram and measuring 13cm. If I had waited much longer and let the fibroid grow, it would have made it more difficult to save my ovaries.

The day of the surgery and the next day were a bit of a blur. I was very sleepy but did successfully pee (or void as the nurses called it) after the removal of my catheter and also managed a shuffle around the ward with the physio.

By day two, I was able to carefully dress myself in stretchy pants and a shirt, make it to the toilet on my own, and shuffle around the ward.

The nurses were very interested in whether I had farted yet – which shows that the bowel has started to function again.

When it did happen, my 11-year-old son thought it was hilarious that everyone was so proud of me for farting and that I pretty much had a free pass to fart whenever I wanted!

I went home on the third day after my surgery.

My physical and emotional recovery was greatly assisted by my supportive husband and son making sure I was able to rest when I came home, having enough sick leave to take a full two weeks off work, and then having the flexibility to be able to work from home until I am able to drive and sit at a desk again.

When I was doing some online research about the experiences of other women following hysterectomy, a lot of women opened up about feeling an emotional sense of loss, particularly those who had lost the opportunity to have more or any children because of their hysterectomy.

This was often compounded by the fact that you might end up in a maternity ward following the surgery with all the new mothers and babies so that your OB-GYN can visit all their patients in one go when they do their rounds!

For me, though, it was really the opposite.

We had already decided when I couldn’t fall pregnant a second time that the IVF journey wasn’t for us and had made peace with the fact that we would focus on our beautiful son.

The removal of the fibroid, which had always made my stomach look like I was a little pregnant, took away a constant visual reminder of a second child we weren’t going to have.

Although my ovaries were left intact, there is still a small risk that I could go into early menopause but I’ve decided not to stress about that and to ride that roller coaster if it happens.

Physically, although I’m only two weeks post surgery and still have some swelling, I can feel the removal of pressure from the space the fibroid was taking up.

It no longer feels like my body is working against me or that the pain and bleeding will dictate what I can and can’t do.

I’m definitely looking forward to no periods and no pain and being able to wear white again!

Reply
Upvote
I had a hysterectomy at 28. My husband and I had been trying for six years to have a baby, with no luck. I had endometriosis and several large fibroids. My tubes and ovaries were removed, as well as my two uteruses.
I had no emotional attachment to my reproductive organs, and certainly didn’t believe my womanhood was threatened because my uteruses  - which were no more or less than muscular bags designed to nurture a baby - had been removed. I’d suffered so much pain, anaemia and embarrassment for 16 years, that I was glad to get rid of the lot.
That was 48 years ago and I’ve never regretted my decision. We adopted a son who’s been the light of our lives for 44 years, and I really don’t feel as though I missed anything.
L
linso 4 months ago