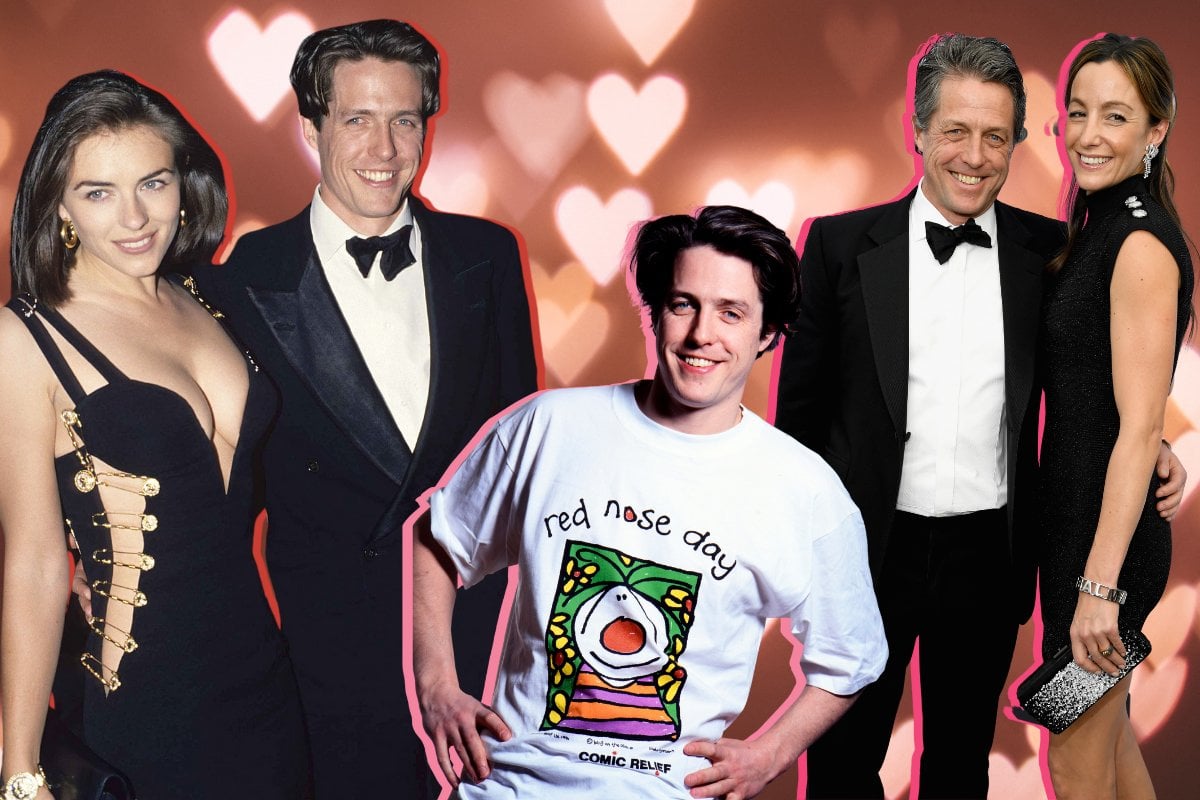 For many years, Hugh Grant was seen as an eternal bachelor.

With interesting thoughts on monogamy, highly publicised relationships (and affairs), and a complicated family situation, even Grant himself had dismissed the idea of 'settling down'.

But somewhere along the way, he did just that. Now married to the mother of three of his five children, Anna Eberstein, he's admitted he was "plain wrong" about his perceptions of marriage and children.

This week, after misinformation was spread about Grant's marriage, the actor set the record straight, tweeting that he married his Swedish wife for love, not for "passport reasons".

No I didn’t, @Internet. I married her because I love her. pic.twitter.com/KKuuR6XNGN

When asked if he googled his wife's name, he replied: "No. A friend sent it to me."

The tweets came after various articles, including Nicki Swift, claimed Grant married Eberstein "for practical reasons when travelling through airports with his partner and their children".

Years earlier, marriage was the last thing on Grant's mind.

In 1987, Grant, now 60, met Elizabeth Hurley, 56, on the set of Spanish film Remando al Viento (Rowing with the Wind). It was Hurley's first major acting role, and one of his earlier movie roles.

What resulted was one of the tabloids favourite couples. Certified A-listers, both together and apart, the interest in their relationship was intense and from the outside looking in, it appeared perfect.

Which is why what happened in 1995, eight years into their relationship, was so shocking to the public.

Grant was caught engaging in a "lewd act" with sex worker, Divine Brown, on Sunset Boulevard in Hollywood.

"I felt like I'd been shot," Hurley told Barbara Walters in an interview later that year.

Grant took responsibility for the hurt he caused. In a public statement, he admitted, "Last night I did something completely insane.

"I have hurt people I love and embarrassed people I work with. For both things, I am more sorry than I can ever possibly say." 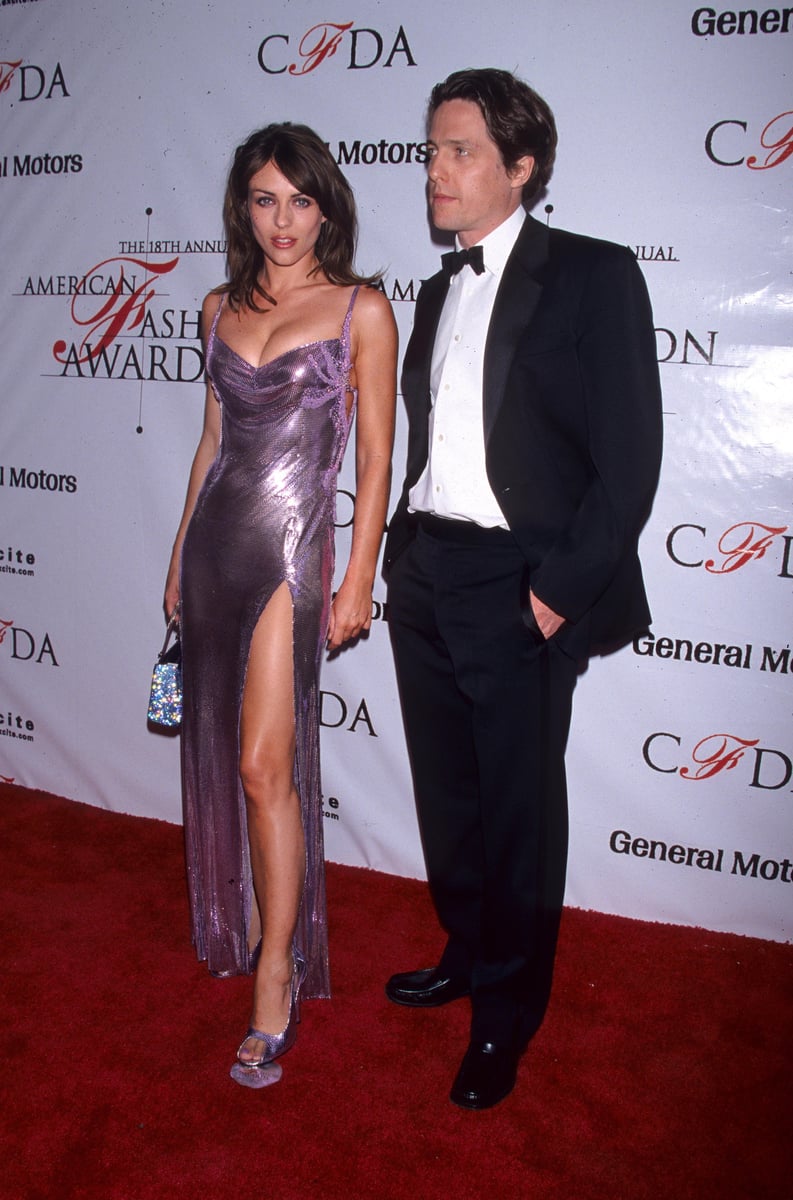 Two weeks later, the actor appeared with Hurley at the premiere of the movie Nine Months and despite immense public scrutiny, including after paparazzi photos captured them arguing in their backyard, Grant and Hurley remained together for another five years.

They split for good in 2000 but remained close friends. That's a cliche of Hollywood relationships - "we remain friends" - but Grant and Hurley truly did. In 2002, he became the godfather to her son Damian.

A belated (because it took me two days to work out how to screen record) Happy 60th Birthday to the glorious Hugh Grant - a magnificent addition to the human race- even though he looks like a monkey. ❤️ you forever xxxx

After their breakup, Grant was linked to several women. He was rumoured to have had a fling with his Two Weeks Notice co-star Sandra Bullock in 2001.

In 2004 Grant began dating Jemima Khan - the ex-wife of Pakistani cricketer (and current Prime Minister of Pakistan) Imran Khan. They broke up in 2007.

In 2003, Grant told the Daily Mail he felt he had "too much career and too much home life".

"I need to get married and have children. I definitely keep my thoughts open to the idea of settling down and breeding," he said.

But he never really took that seriously.

The same article featured quotes and anecdotes from Grant's friends and associates about his bachelor lifestyle, and how much he enjoyed the single life.

"He's never had a kiss-and-tell, because that's for stupid soap stars who go to Stringfellows and pick up awful lap dancers," a friend said.

"He goes for well-brought-up women who wouldn't dream of telling all, and he does very well. He's a single man, so why not?"

In 2012, Grant himself said he was "not a massive believer in marriage," and in 2015 he told People he thought it was "a recipe for mutual misery".

Then in August 2016, Grant claimed the secret to a happy marriage was an open marriage.

"Do I think human beings are meant to be in 40-year-long monogamous, faithful relationships ... No," Grant told Howard Stern on his radio show.

"Whoever said they were? Only the Bible or something. No one's ever said that that's a good idea." 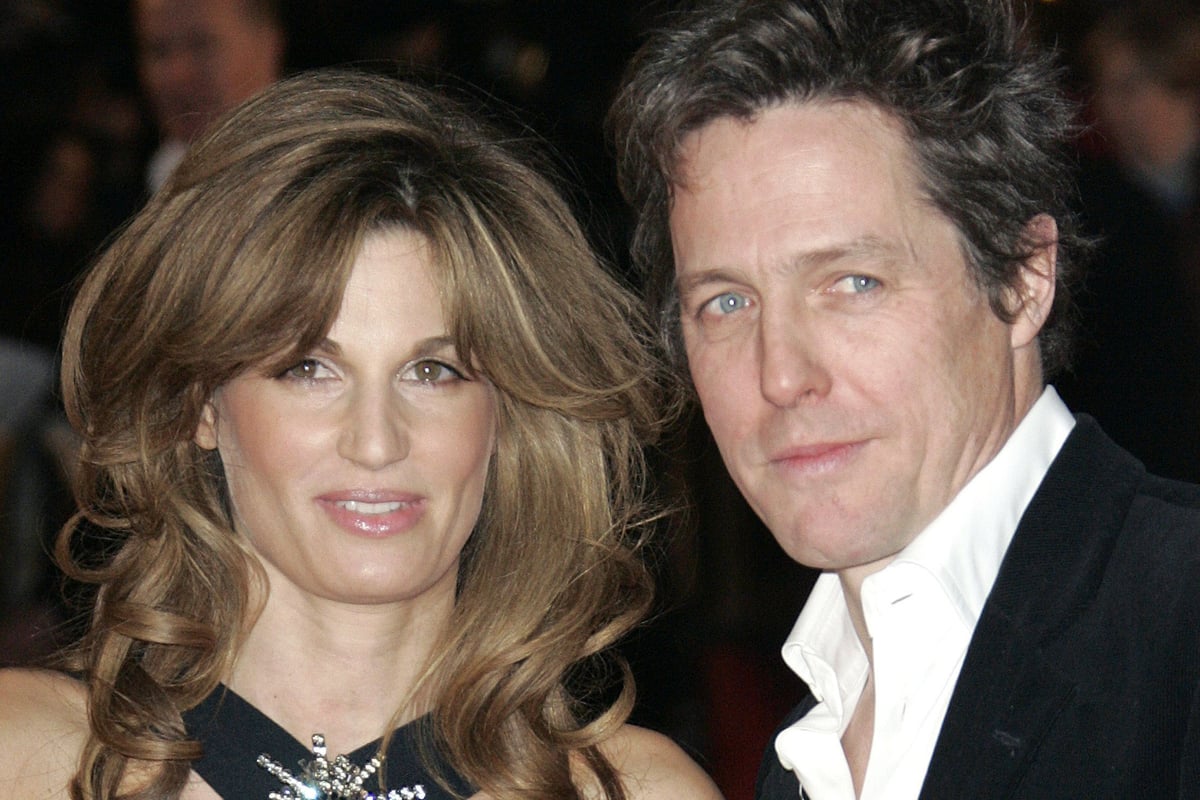 By this point, his personal life had gotten much more complicated.

In September 2011, he welcomed his daughter Tabitha, the product of what his publicist called a “fleeting affair” with Chinese restaurant receptionist Tinglan Hong.

When the actor met his first baby, he was 51.

Grant's second and third children – two boys – were actually in utero at the same time, to different mothers.

The first to arrive, named John Mungo, was born in September 2012 to Swedish television producer Anna Eberstein, 41. The other, Felix, was born three months later in December 2012; Grant's second child with Hong.

Grant had gone from philanderer to father-of-three in the space of 15 months.

Grant and Eberstein welcomed another child – who has never been publicly named – in December 2015.

In 2018 they made a very rare appearance together at the Golden Globes, and it was clear Eberstein was pregnant again. A month later, their third child together was born.

Funnily enough, it was Hurley who confirmed this news during an interview with Andy Cohen on Watch What Happens Live.

"He had another one last week," she said at the time. "He has five. He was over 50 when he spawned them all." 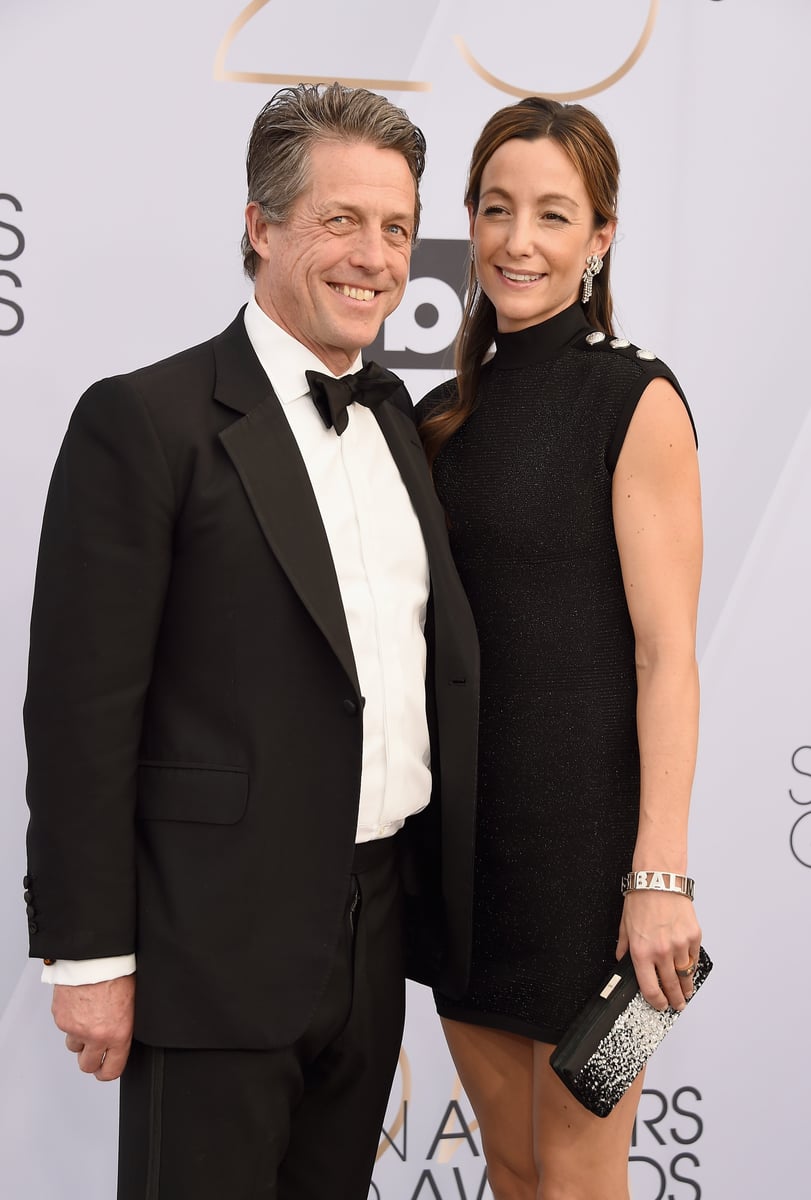 Grant has been very private about his family life, but has spoken about parenthood a couple of times.

On becoming a father, he told People TV: "It was the nicest thing that's ever happened to me - he said sounding clichéd - but it happens to be true."

"It's just lovely to have all that love around. Suddenly you love someone more than yourself. It's unheard of in my case and they love you and it's all enchanting."

After the birth of Tabitha, he told Ellen Degeneres everyone who told him to have kids was right.

"Now that I have a child, it is life-changing. I recommend it. Get some!" he said.

While his attitude on children changed, his opinions on marriage took a little longer to come around.

Grant married Eberstein in May 2018, but the commitment really only came about for practical reasons.

"My wife agrees with me that marriage is a pretty preposterous social construct," he told USA Today.

"But when you've got three children, it's a nice thing to do." 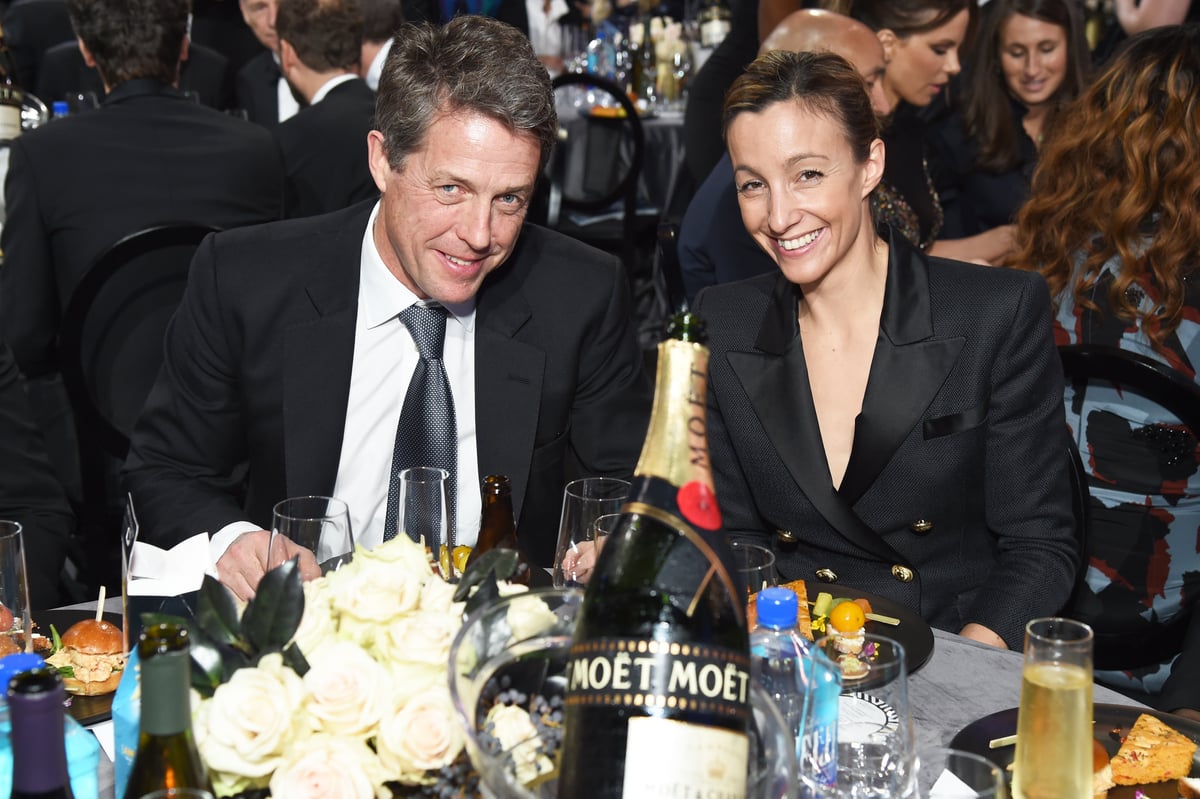 While this week, Grant claimed he married Eberstein for love, experiences with immigration and airports partly played a role.

"I didn't like going through immigration into countries where they'd say, 'Everyone with a Grant passport, over here, and all the others through there'," he explained. "She went through with the nannies. That seemed all wrong."

"And children, you know. I used to roll my eyes. People would say, 'Oh Hugh you don’t understand it', but they were right."

Now fully invested in his domesticity, Grant has been comfortable speaking about his marriage throughout 2020, especially as he promotes TV series The Undoing with Nicole Kidman.

In November 2020, Grant said in an interview on The Late Show with Stephen Colbert he and Eberstein had contracted COVID-19 in February.

He experienced a number of common coronavirus symptoms including a tightness in the chest and a loss of smell.

But there were also a few more unusual symptoms.

"I kept breaking into a terrible sweat. It was like a poncho of sweat, embarrassing really. And then my eye balls felt about three sizes too big," he explained.

"I was walking down the street one day and I thought, I can't smell a damn thing. And you start to panic. Because by then people had just started to talk about this as a sort of symptom," he said.

"I eventually went home and sprayed my wife’s Chanel No. 5 directly into my face, couldn’t smell a thing, but I did go blind," he joked.

An antibody test a month ago confirmed they'd had the virus fairly early in the pandemic.

"We have antibodies, I'm rather proud of them. I got it in February, I had an antibody test only a month ago and I still have those antibodies, so I know that's what it was," he explained to Colbert.

Grant did not say if any of his five children, three of which have been quarantining with he and Eberstein, contracted the virus.