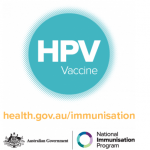 Thanks to our brand partner, Australian Government - Department Of Health

Hours after having her uterus removed, Samantha Brown lay in her hospital bed hysterically crying as she listened to the cries and gurgles of newborn babies in the obstetrics ward she’d been placed in.

She’d always wanted to have three children but as she lay there without her womb surrounded by “loveys” as she called them, it was a stark reminder that her dream of a trio was simply that – a dream.

Sam was 37, already had two gorgeous children – and this was the second time she’d been in a fight for her life. Seven years prior she’d beaten thyroid cancer, and just when she’d started to relax and feel like there were enough years in the rear vision mirror, she got a second diagnosis – aggressive cervical cancer likely caused by the human papillomavirus.

Watch: Sam, now 48, has survived both thyroid and cervical cancer. This is her story. Post continues after video.

“In the back of my head I was thinking, you’ve already had cancer once, you’re probably not going to survive this. What are the odds?” she told Mamamia.

There had already been so many horrific, stressful moments in Sam’s journey before she found herself bawling in that Sydney obstetrics unit. Her first diagnosis came when her daughter Gabby was only six months old and she had to be isolated from her because of the radiation her body was being hit with.

There was the shock at being told about her second diagnosis – despite religiously getting regular Pap smears (she’d been returning false negatives). There was the fact that she lived in outback New South Wales and so everything was just so far away and hard to coordinate. The whole time there was a fear – “what if it’s spreading while I wait?”

It did get worse. After getting her uterus removed, Sam was told the cancer had spread.

She’d have to make the trek from Cobar to Sydney again to have both her ovaries and her lymph nodes removed. She was warned if it had spread to her nodes, she’d have to start getting her affairs in order.

As much as she tried to stay positive, Sam would often succumb to the “sinking feelings” and “pity parties” that would envelop her.

Her husband had already proven himself to be her biggest support. She’d found herself sobbing on the trip back from the uterus surgery dramatically (in her words) lamenting the fact she’d have no more kids: “If we break up you can go and have more – I can’t.”

“Babe, I will get a vasectomy,” he’d firmly replied. They were a team, he wasn’t going anywhere.

But that didn’t make it easier when Sam once again boarded a flight to Sydney for her second surgery while her children bawled their eyes out at the airport.

“That was really horrible having to leave them and them not understanding. My son was very non-communicative at the time and very reliant on me… it was one of those moments where it was like, ‘I don’t know what I am going to do? I can’t die. This child needs me.'”

After surgery, the family could do nothing but wait for the phone call which would tell them if the cancer had spread to the lymph nodes. It was coming up to Christmas, so Sam’s husband threw himself into Christmas light decorating – it had to be the best light show they’d ever had. No one spoke about it, but they knew what was behind the obsession – it might be their last Christmas together.

But the news was good. Sam was in the clear and has been completely cancer free for the past 10 years.

The family now live in Queensland and the kids are teenagers, aged 17 and 13. Following in his big sister's footsteps, Aidan recently had his HPV vaccine at school.

It was a non-negotiable in the Brown house. In fact, vaccinating children against diseases that, if not acted against, could put their lives at risk is something Sam is very passionate about.

"I sort of look at some people [who don't let their kids get the HPV vaccine] and think 'do you know the risks to your child if they don’t receive the HPV vaccine? Your son could get throat cancer and not be able to talk, or your daughter at 22 could be diagnosed with cervical cancer, because it's the leading cancer for young women’.

"If I can save my child from getting anything why wouldn't I try? I look at some of these people and think you don't have diseases [like smallpox], they're gone because your parents vaccinated you."

In Australia girls and boys aged up to 19 can get the two doses of the HPV vaccine free of charge as part of the National Immunisation Program.

It's a program that's routinely done in Year 7 or 8 (depending on the state or territory) that parents can opt their child in for. The key step? Signing a consent form the kids bring home and take back to school.

Given that Sam lost her uterus, ovaries, lymph nodes and very nearly her life to a likely HPV-caused cancer, she doesn't understand why you'd opt out.

Surviving cancer twice Sam has learnt to not sweat the small stuff in life, and to her, vaccinating her children and potentially saving their lives isn't something small. It's one of the most important things she can do as a parent.

She also chooses to live her life by two quotes, quotes that put everything Sam says into perspective.

"People can say life is hard, but compared to what?"

It's hard to argue with that.

For more information about the HPV vaccine, visit the Department of Health's immunisation website.

You can prevent HPV related cancers and diseases by making sure your child/children get the HPV vaccine. The vaccine is provided free in schools for child/children aged approximately 12-13 years. It's two injections six months apart. The HPV vaccine is very safe, and has been offered in Australia since 2007. Complete and return the consent form provided by your child's school so they can receive their vaccine. Click here to find out more

I agree with her. My mum had cervical cancer when I was young so when the vaccine came out my doctor told me I had no option, I was getting it. I’m still glad I did. Prevention is better than anything

Ew... surely this is some indirect form of sexual abuse? It's totally perverse. The doctor should be concerned about the father wanting to know these things.

I think this comment might be meant for a different article, because I have no idea how it relates to this one about the HPV vaccinations?