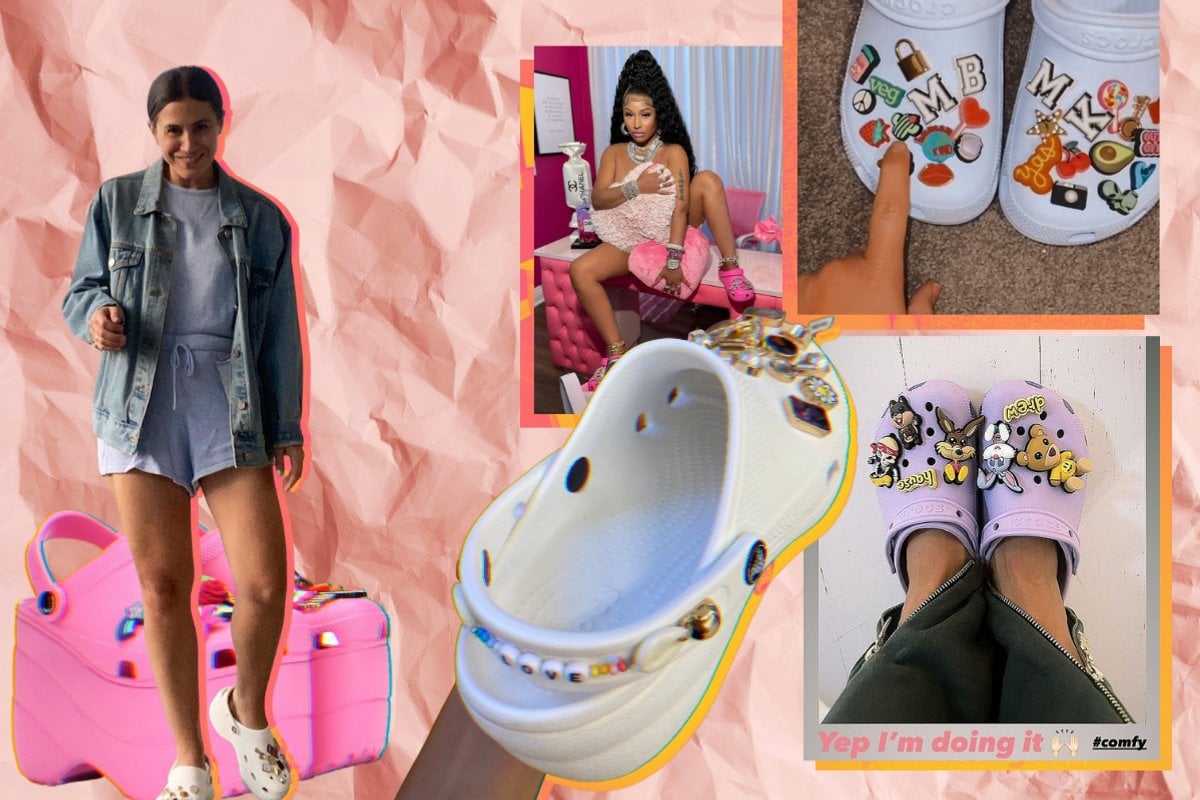 When I worked in fashion magazines, I learnt an important lesson: never write a trend off.

I distinctly remember an old editor saying Birkenstocks would never be cool. But then one of the Olsen twins wore a pair of them out in New York, and in an instant, Birkies became the go-to shoe of the off-duty fashion girl. Boom.

That was like, 11 years ago, and the popularity of 'ugly shoes' has been climbing ever since.

By way of definition, an Ugly Shoe is a style of footwear that is deliberately unattractive. It can be used by the wearer to offset an outfit - to add a dimension of nuance.

On the next level are the iconic ugly shoes, like Gucci's heeled loafers, or French fashion house Maison Martin Margiela's cult 'Tabi' style, which comes with a built-in camel toe. 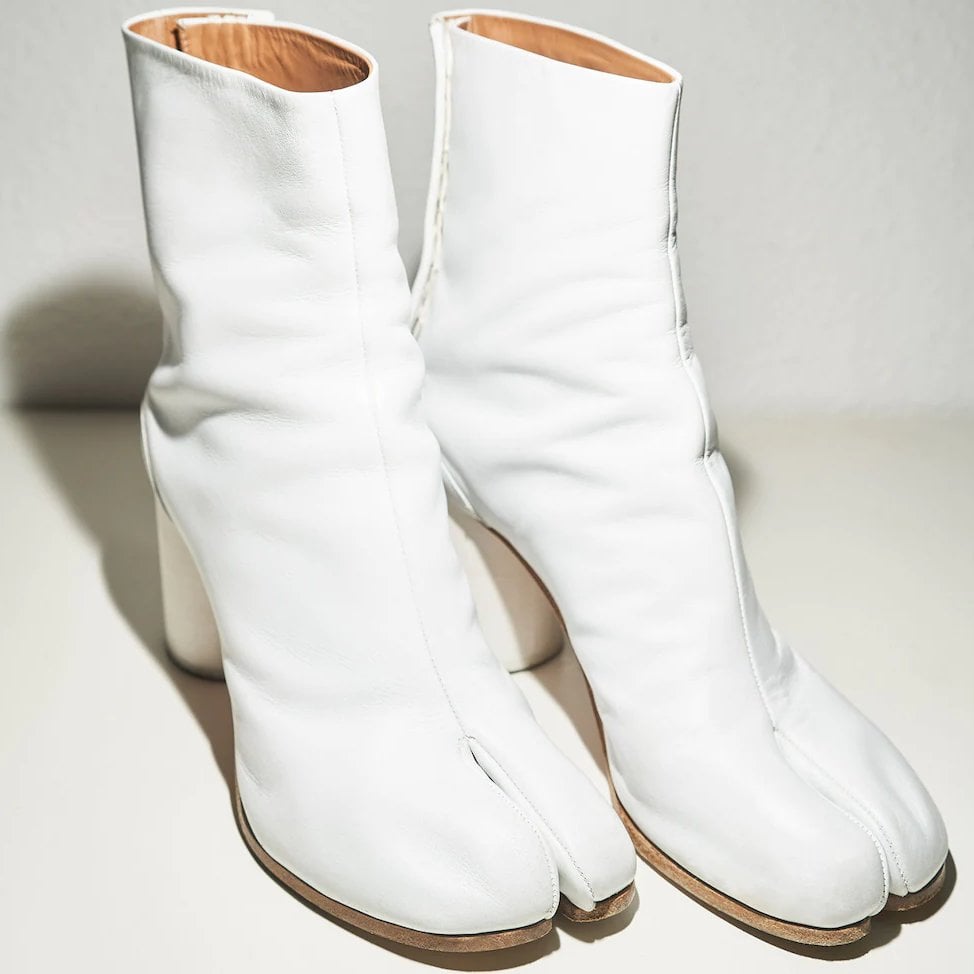 But level up, to another echelon of ugly - to the pinnacle, if you will - and you'll arrive at the ugly summit. A summit only some dare to scale. There, on a rubber pedestal, you'll find Crocs.

Yep. For this roadtest, I went straight to the top.

But first, a (tiny) fashion history lesson. Crocs were first developed in 2001 as a boating shoe, rendered in rubber for durability and being around seawater and whatnot - hence the little holes on the sides.

They've since evolved from a hardy shoe made for comfort to a low-key footwear icon.

Along the way, Crocs have partnered up with artists, brands and even fast-food chains to create some truly, unabashedly hideous creations that seem intent on pushing the ugly dial up to 11: 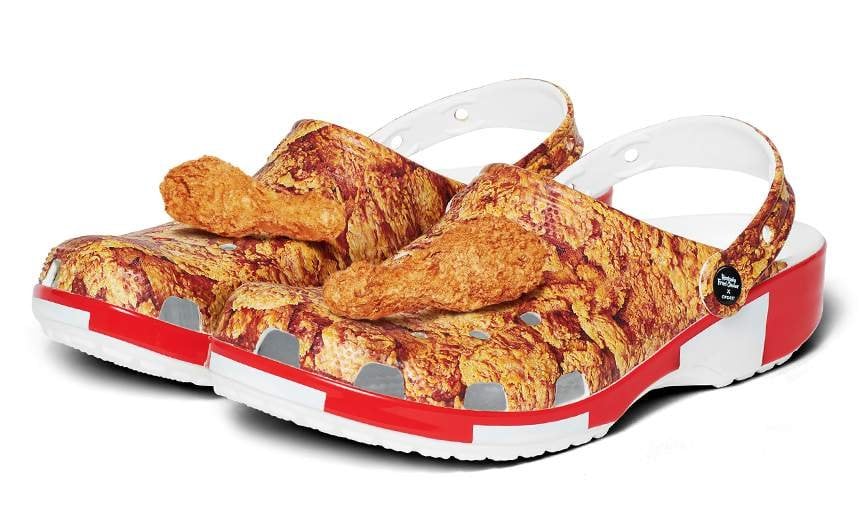 That is a drumstick, yes. Image: Crocs.

Another case in point: their 2017 collab with Balenciaga almost broke the fashion internet. 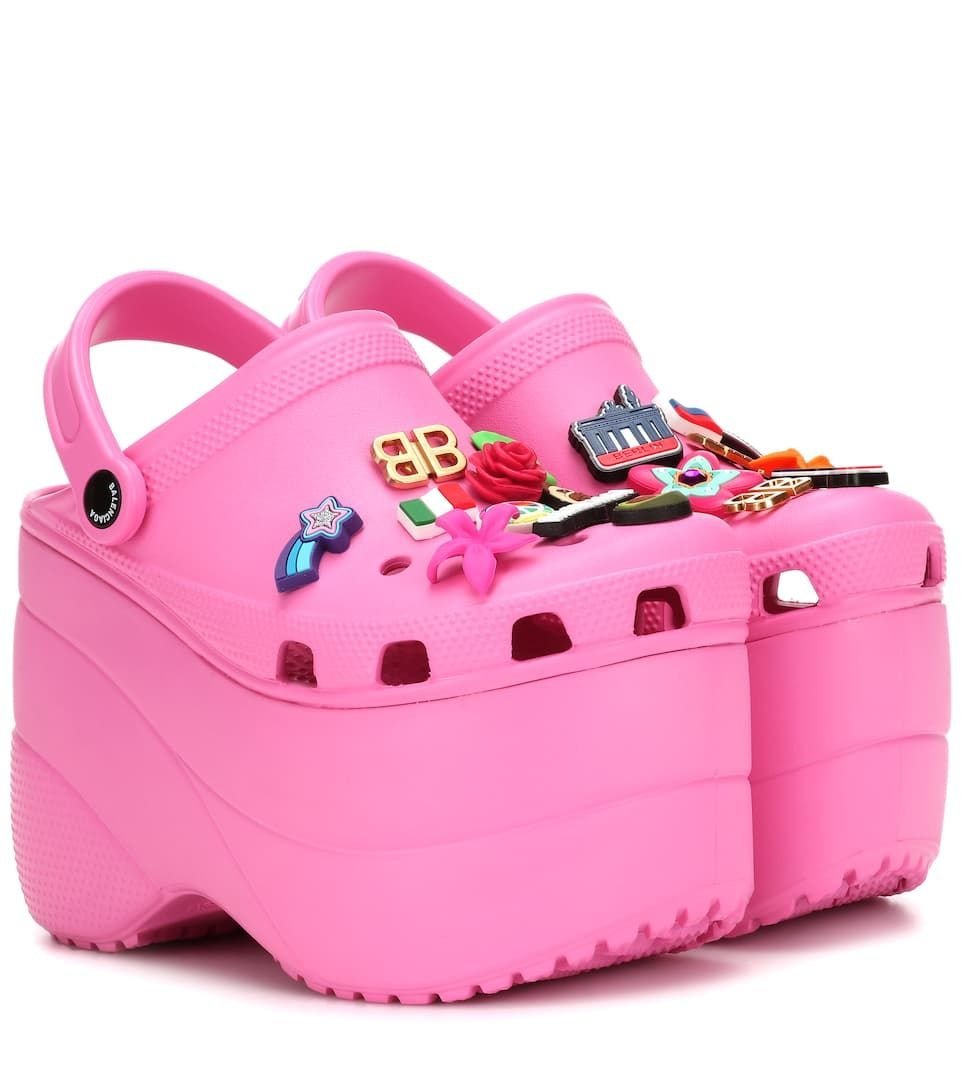 In July 2020, Kanye West even co-oped the Crocs concept with an environmentally friendly rubber clog housed under his Yeezy label. You know what they say about the sincerest form of flattery...

But back to my roadtest.

You see, in wearing the Crocs, it became less about wearing them, and more about understanding the psyche of them. And that meant joining a small, selective club of Crocs People.

Those who wear them ironically.

Those who wear them unironically.

One surprising person who pretty much lives in Crocs is Justin Bieber. The musician is such a fan, he collaborated on a pair with his own streetwear label, Drew House. They're purple and feature Looney Tunes characters, because of course they do.

In April, in a brilliant PR move, Bieber sent the style to Victoria Beckham, who posted the package on her Instagram stories and said she would, quote, "rather die" than wear them. 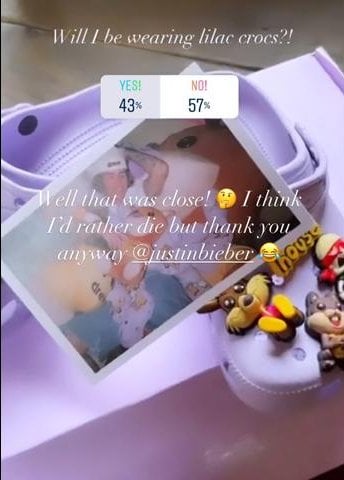 The shade did nothing to deter customers - JB's Crocs sold out instantly.

THEN, P.E Nation's Pip Edwards, arbiter of all that is cool, posted in a pair. 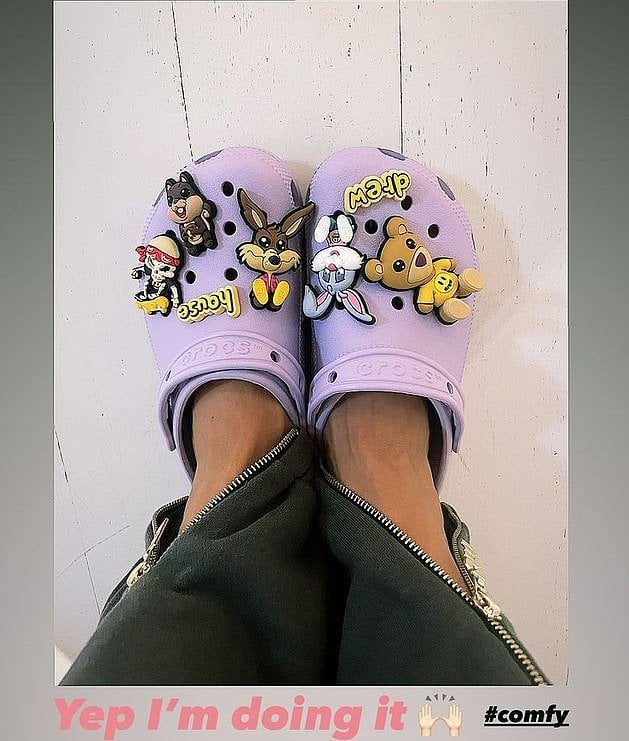 Which all begs the question: is this a masterful marketing plan, or some serious fashion schadenfreude?

When I visited the PR agency that represents Crocs in Australia, I was offered the Drew pair to trial. But my eye was drawn to another. They were stark white and covered in embellishments, like pop-out stickers and chunky jewels, which I discovered can be personalised to your individual taste (these decorations are called "Jibbitz".) 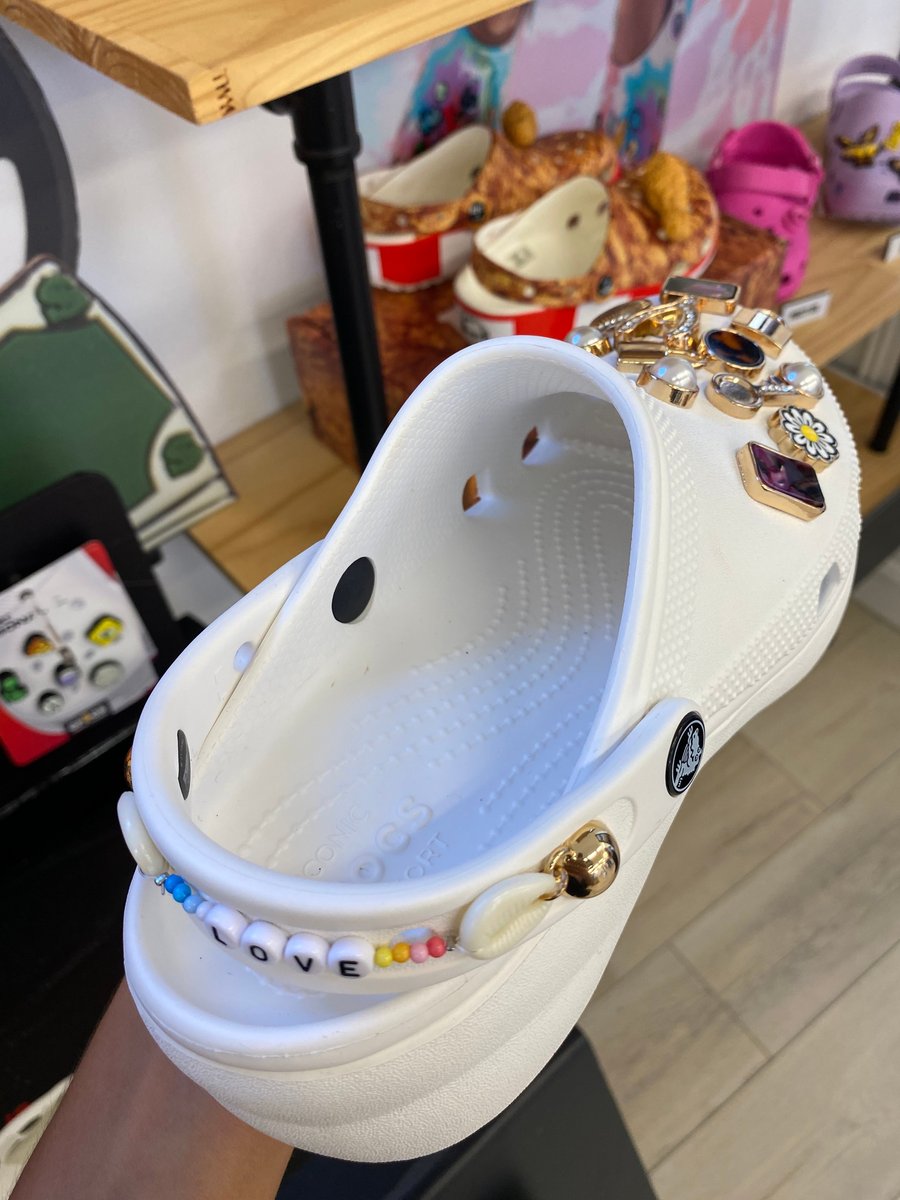 They were the same pair I'd seen MAFS' Martha Kalifatidis mention on her Instagram Stories, which she'd customised with cute things like her boyfriend's initials. 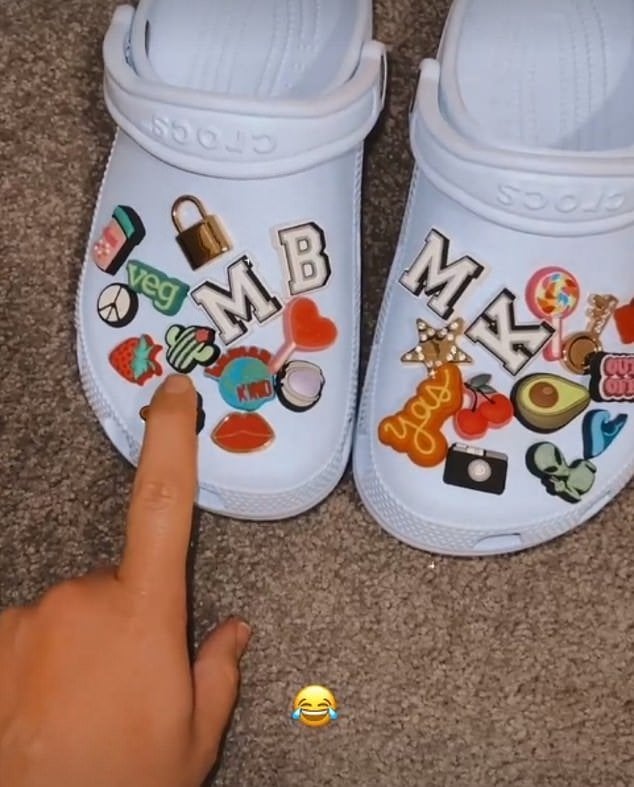 When I received my pair in the office, some of my colleagues told me they were chic and would look cute on me. Like the emperor's new clothes, but with rubber shoes.

The first outfit I tried them with was my Saturday activewear. Head to toe black, finished with Crocs. They kind of look like sneakers, no?

But the thing about trying to go incognito in Crocs is that you can't. I went for coffee in this outfit and I could feel people's eyes burning into my soles. 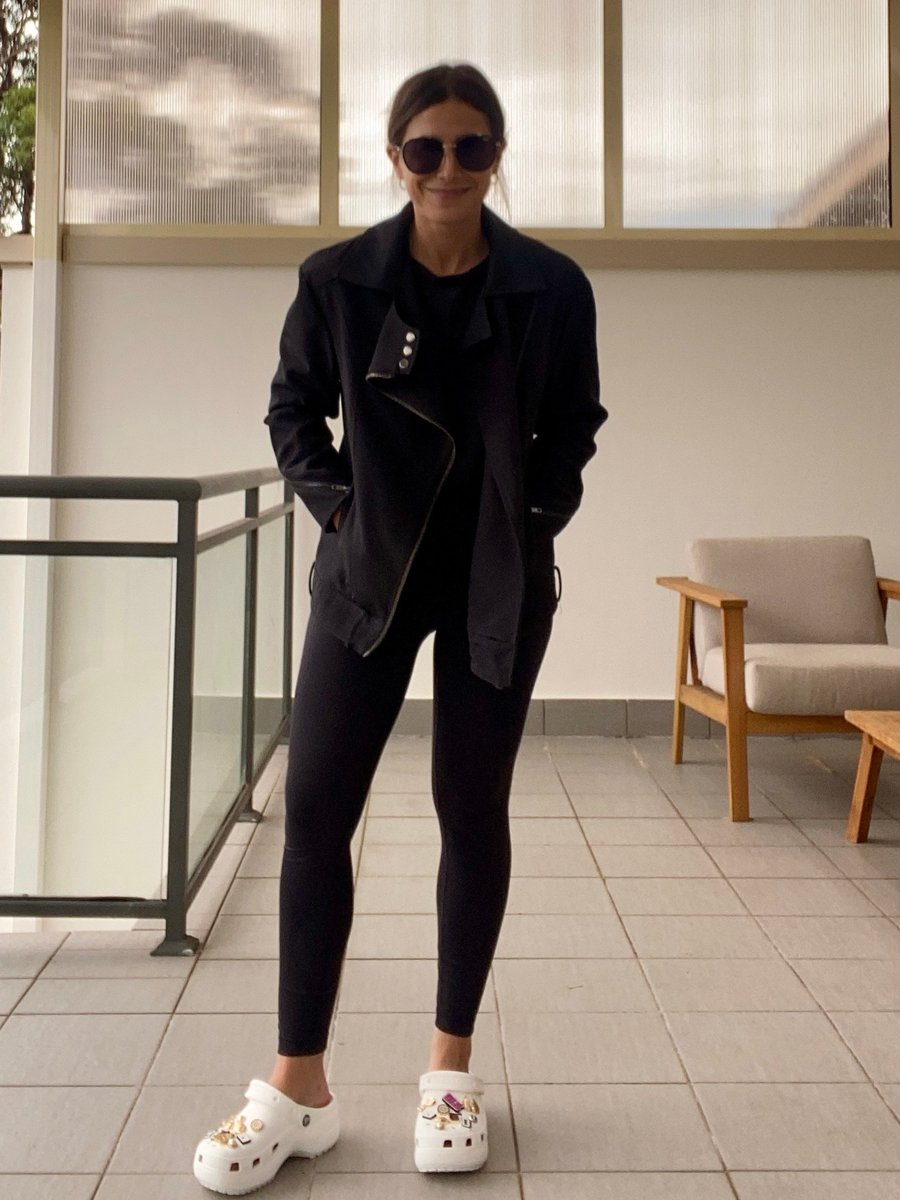 No, you have to go headfirst into it. You have to embrace the ugly. So I tried something more playful: a pastel blue knit set, styled with an oversized denim jacket. The Crocs felt right at home with this look. Youthful, unfazed. I think I can pass for Gen Z? (I'm 32.) 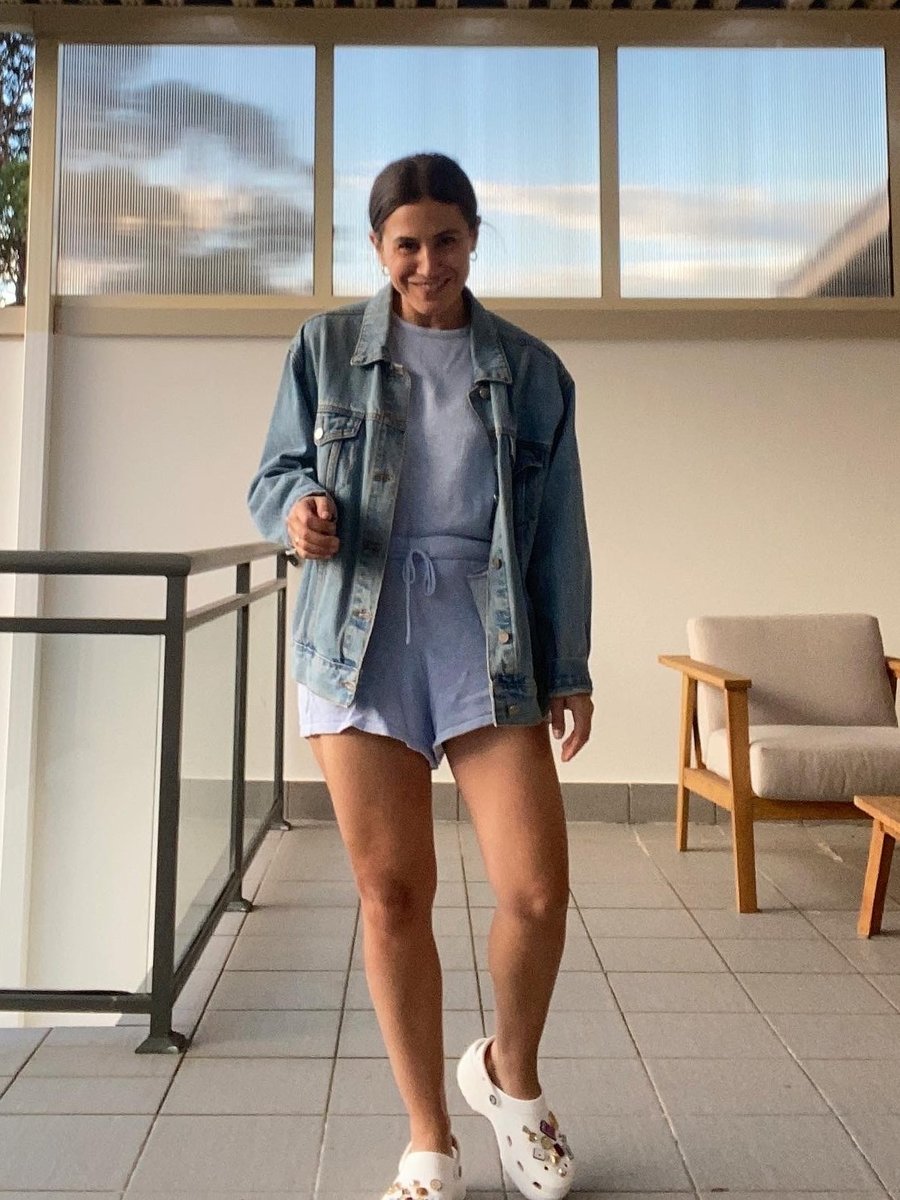 This next look was probably my favourite: what I'd regularly wear on a casual day, with chunky shoes to anchor it. I just subbed out my usual slides for the Crocs. I'd call it a near-pass? 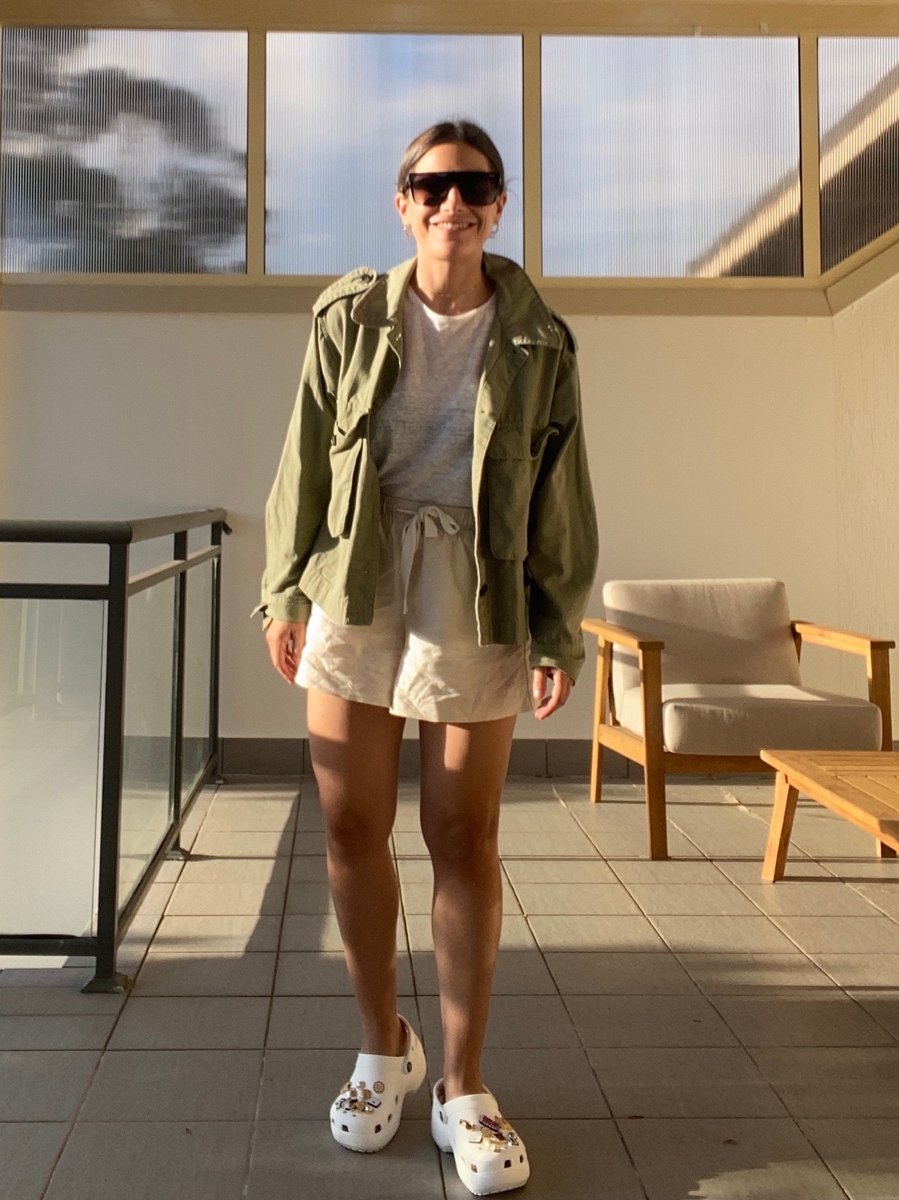 When I posted the outfit pictures on my Instagram, the comments were extremely positive - ranging from "Obsessed" to "Love them" and "Feeling influenced already".

I felt validated again when a colleague from our Social team told me Crocs were trending globally, because Nicki Minaj had posted a photo in a pair embellished with Chanel-themed crystals.

Suddenly I wanted these, too. And then I understood it. Once you start wearing Crocs, it's like surrendering the f*cks you used to give. And that makes you kinda badass. At least I think that's what Justin Bieber is going for.

Will I ultimately wear my Crocs out of the house? Maybe.

Will I stare at them, bedazzled, and imagine myself having the confidence to wear them un-ironically? Definitely.

Are you a Crocs person? Share your thoughts on the trend in the comments below.

Reply
Upvote
I got into crocs when I was competition swimming, they saved me from tinea and meant I no longer had to wrangle socks over sticky chlorine feet. They’re so versatile and are very comfortable to wear. I guess I don’t care what people think, but if you are trying to hide them then black is probably the easier colour for that. White is pretty noticeable!