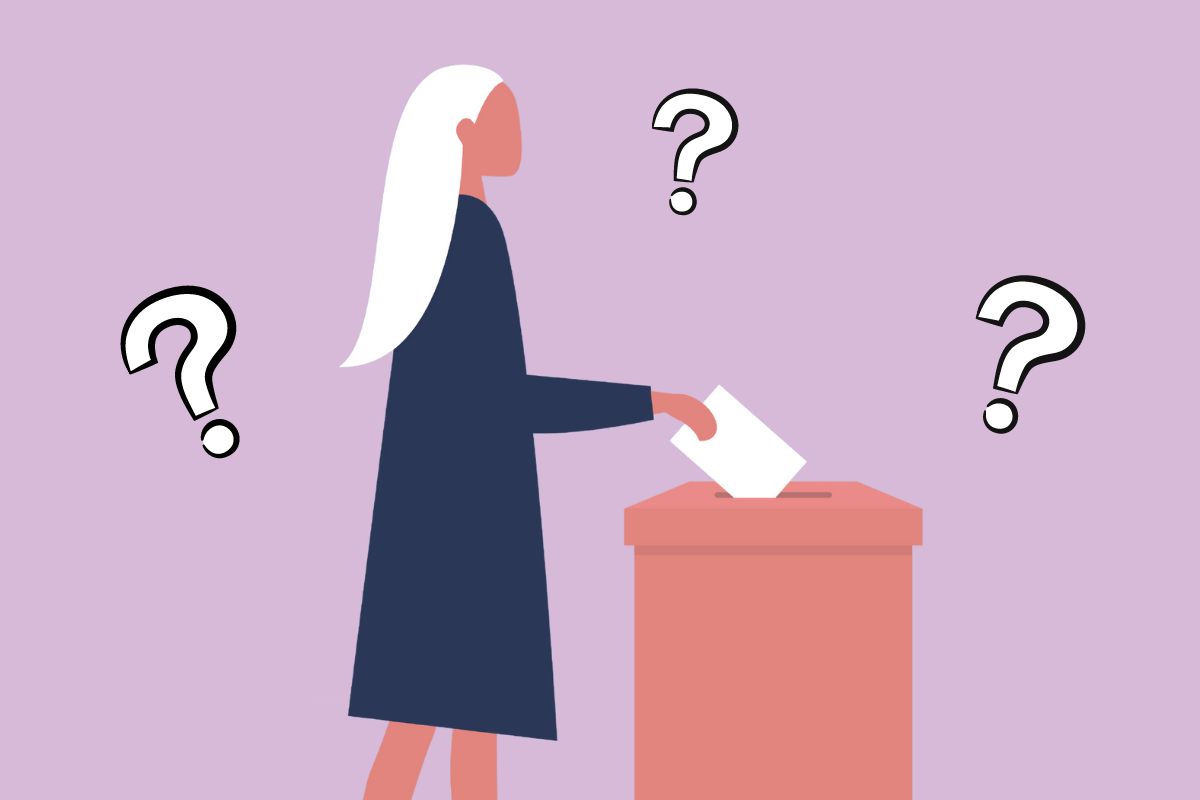 In just under two weeks, millions of Aussies will be heading to the polls with a democracy sausage in hand.

But after what feels like years weeks of endless campaigning, debates and election promises, we're getting to the pointy end: and we have questions....

Like what even is preferential voting? Why are there two different voting papers? And why is one of them so ridiculously big?

To help you get up to speed before the election on Saturday May 21, we've rounded up every single question you want to know but are too afraid to ask.

Plus, with early voting officially open this week, we wanted to pop in nice and early to explain who can vote before the election, and how you can do it.

In Australia, we have a preferential voting system.

This means we get to allocate preferences to whichever candidate we like the sounds of.

When you turn up to the polling booths on May 21, you'll be given a green ballot paper for the House of Representatives and a big white paper for the Senate. You have to fill in both.

As Voting Australia explains, the system is good because it means the winning candidate is the most preferred by the entire electorate, voters who support minor parties know their votes will count towards deciding the winner and parties sharing overlapping philosophies can assist each other to win.

But. It's complicated, time-consuming for voters and confusing.

2. How do I fill out the green ballot paper (House of Representatives)?

Before we get into filling out the ballot paper, let's quickly go over what the House of Representatives is.

The House of Reps is the lower house of Parliament where your local representative sits.

These people represent each of Australia's 151 electorates, which are divisions in each state and territory.

You can find out who your local member is, depending on which electorate you live in, here.

To vote for a member of the House of Representatives, you'll need to grab your green ballot paper and write number one in the box next to the candidate who's your first choice. Then fill out numbers two, three, and so on.

This part is very important: You need to fill out number EVERY box on the paper. 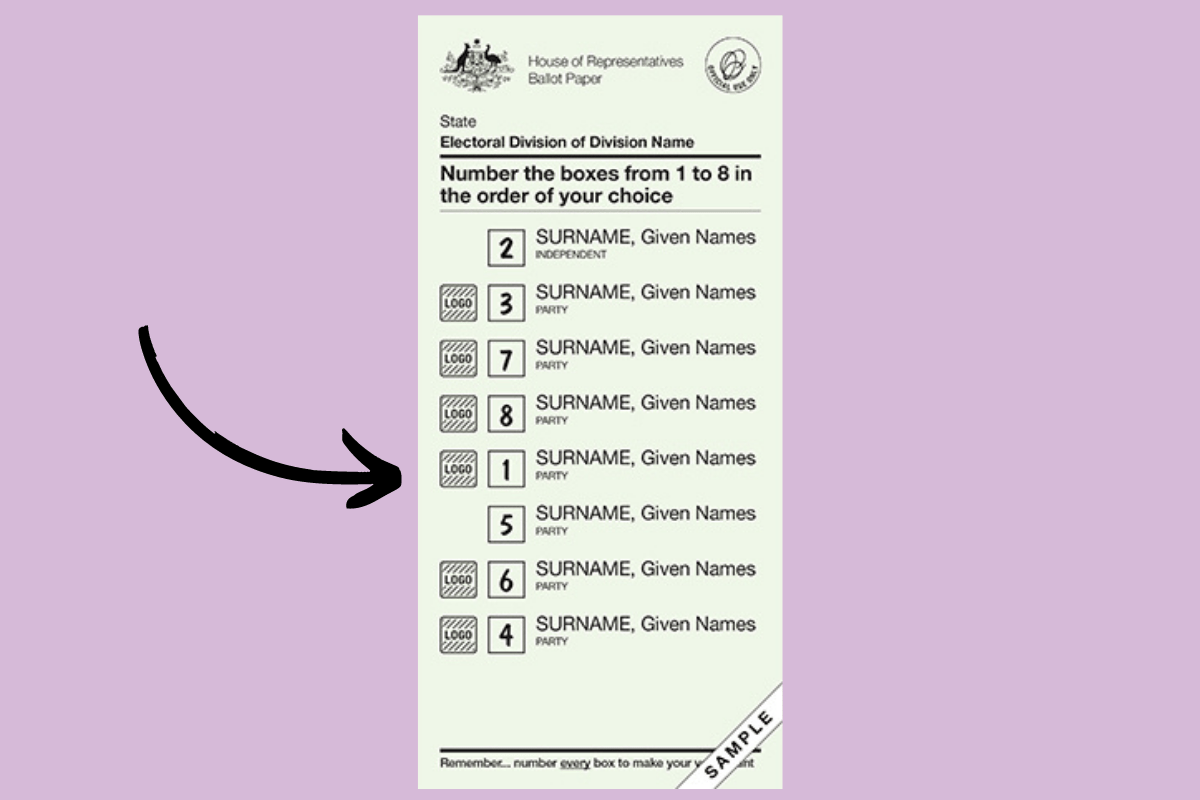 If you leave your paper blank or cross the boxes instead of numbering them, your vote will be considered informal and won't be counted.

3. How do I fill out the white ballot paper (Senate)?

The Senate is a bit different.

This Senate is also known as the upper house and is made of senators who represent their state rather than an area within the state. For example, Penny Wong, who is a member of the Labor Party, is a senator for South Australia.

We only vote for around half the Senate at each election with six senate vacancies per state each time. But all territory senate seats are up for re-election because the Northern Territory and the ACT only have two each.

When it comes to voting for the Senate, you get a choice to vote above or below the line.

If you vote above the line, you need to number at least six boxes above the line for the parties or groups of your choice. Write number one in the box that is your first choice and so on.

If you vote below the line, you need to number at least 12 boxes for individual candidates of your choice. 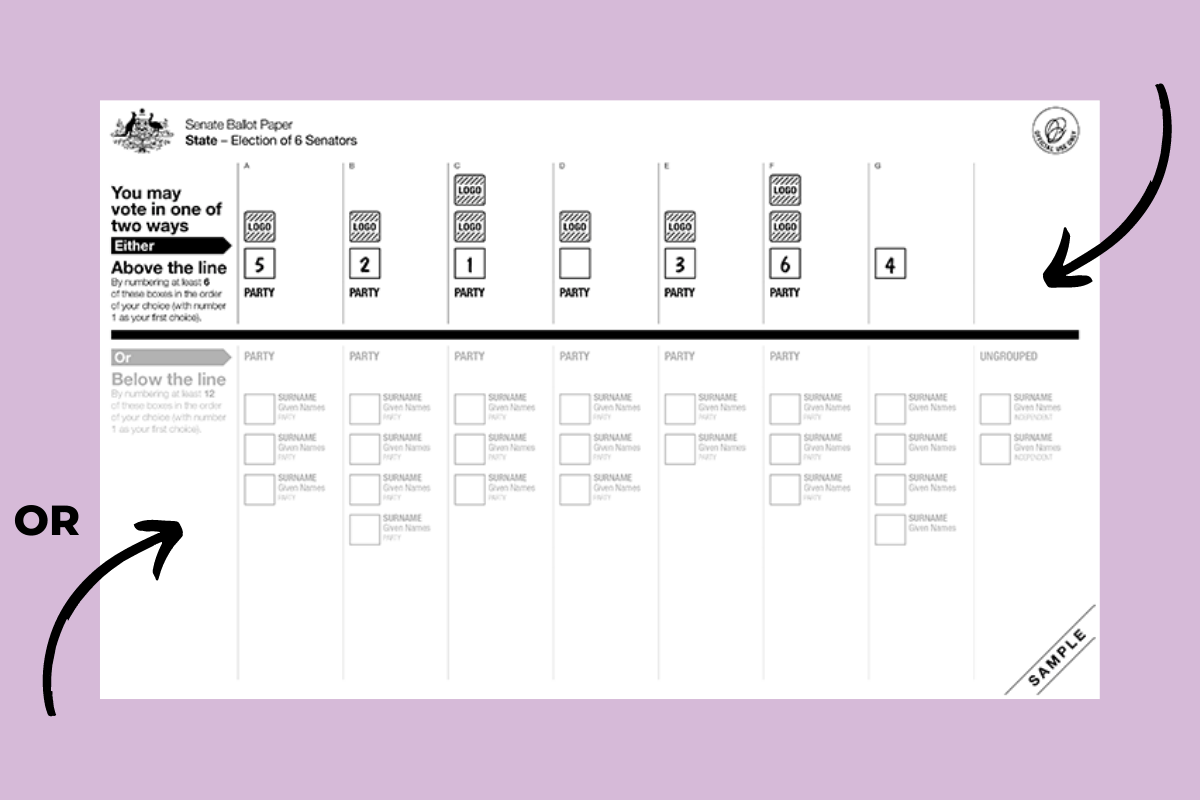 On May 21, you can rock up to any polling place in your state or territory.

Polling places are open between 8am and 6pm and are usually located in local schools, church halls or public buildings. You can find one close to you here.

If you can't make it on election day, you can apply for a postal vote. But you will need to complete your ballot on or before election day.

Yes, you can. In fact, early voting officially opened this Monday.

According to the AEC website, you can vote early if you:

There are over 500 early voting centres across Australia that you can go to cast your vote. You can find one close to you here.

Voting is compulsory for Aussies aged 18 and over. And you need to be enrolled to do so. If you don't vote, you may receive a $20 fine.

So a donkey vote is where the voter ranks the candidates based on the order they appear on the ballot form itself. These people who don't want to vote or cop a fine, also sometimes decide to do what is called a 'informal vote', where they intentionally leave their ballot paper blank or draw a picture on the paper.

Can we highly suggest you....don't? Voting is a privilege many other countries are not afforded. The fact we live in a democracy and get to choose who we'd like to have in charge, is so, so important.

7. Who are the candidates in the election?

By now you would have heard of the Coalition, Labor and the Greens, who are the three main parties in Australia.

The Coalition is made up of the Liberals and the Nationals, who formed a deal to govern the country together. If the Coalition wins government again, Liberal leader Scott Morrison will remain the prime minister and Nationals leader Barnaby Joyce will continue to be the deputy prime minister.

Lastly, there're the Greens, which Adam Bandt heads up. The Greens likely won't win the election, so instead they're fighting to hold a balance of power in government (more on that later).

To learn more about the parties, we've created handy guides on where each of the major ones stand on the cost-of-living, climate change, domestic violence and the Uluru Statement from the Heart.

Of course, there is more than just the major parties.

There's also a whole lot of independent candidates running this election, many of whom are women.

8. What decides who wins government?

In order for a party to win government in its own right, they need to hold the majority of the 151 seats in the House of Reps. This means they need to reach the magic number of 76.

However, sometimes the major parties don't reach 76 seats, leaving us with what is called a hung parliament.

This was the case back in 2010 when Prime Minister Julia Gillard made a deal with three non-aligned independents and the Greens to support a Labor minority government.

9. How can the Greens win a balance of power?

As we mentioned earlier, the Greens are fighting to win a balance of power in government. This allows them to have a greater say on what we do and don't do as a nation by pushing the government to take action on important issues.

According to Mark Kenny, host of Democracy Sausage With Mark Kenny podcast, the Greens "hold a significant slice of the vote" heading into the election.

"We're seeing in the polls in the lead up to this election, suggestions of the Greens getting somewhere around 14 or 15 percent of the vote," he told Mamamia's daily news podcast, The Quicky.

"Now, that would be a very high vote for the Greens, but they're in that ballpark most of the time, somewhere between 10 to 13 percent. That guarantees them a very significant place in the upper house."

The Greens also have one seat in the lower house which is held by the leader of the Greens, Adam Bandt.

10. What would happen if a bunch of Independents get voted in?

As Kenny explained, it's too hard to say what will happen if a raft of independents get voted in this election.

"If Labor wins this election and wins decisively, and the polls suggest that it's possible, even if a few of the teal independents do get elected, they won't actually hold the balance of power because the Labor party could have a majority in its own right. Then there's the question of what would they do in that circumstance?"

"There's so many hypotheticals at the moment, and one of them is just how well the Labor party does."

Reply
Upvote
Wait, so I don't have to voted where I'm enrolled?
"On May 21, you can rock up to any polling place in your state or territory"
S
snorks 7 days ago