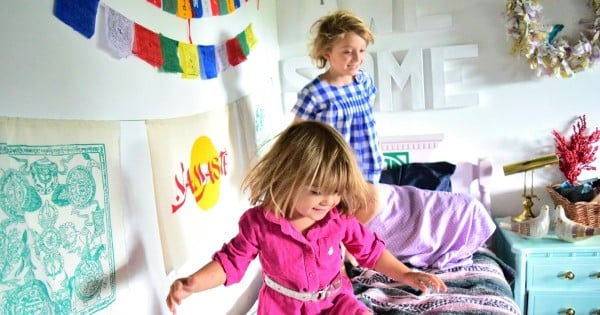 Thanks to our brand partner, S-26 GOLD® TODDLER

There is a phrase I’ve heard a lot lately, over and over again.

It’s been the number one phrase muttered in our home over the past fortnight. Closely followed by, “Put down the iPad” and “Muuum, I’m hungry”.

Oh, and “he took my *INSERT FAVOURED TOY HERE*”.

You see, we’ve just had school holidays, and I’ve been working from home – my three kids have spent a lot of time being told to “just go play” while I’m on the computer. At the same time, I was trying, like any mum of young kids, to limit their time in front of screens.

So you can imagine – with three young kids unable to go to school or daycare, there was a lot of being bored.

I learnt something though.

I learnt that after being told to go and entertain themselves for long enough, kids actually do it.

After being told to go and entertain themselves for long enough, kids actually do it. Image: iStock.

Psychologist Jo Lamble told me that what I had done was the right thing. She says when a child is left to their own devices, they may be bored or lost at first, but then they create ways to entertain themselves.

“If our children tell us they’re bored, we need to resist the urge to always find something for them to do,” Lamble says.

“One of the biggest things is to let kids problem solve themselves. As parents, we tend to step in all the time for kids-  they don’t know how to do something, we tell them what to do or help them. A lot of parents even do it for them. It’s about encouraging kids to problem solve themselves, coming up with answers, brainstorming,” Greenfield says.

“Parents need to encourage that more.”

So how can you untangle and enhance this innate imagination that we all have?

Greenfield says that it is up to parents to think outside the square, to encourage them to try different things.

He says, “The worst thing that can happen is that it doesn’t work or you make a mistake, it is not the end of the world.”

“It is about giving them the confidence to try things.”

We all want our kids to have a good imagination - from the time they can make eye contact, we try and foster that, don’t we? We tell them stories, we make up fantasies, we teach them to finger paint and sing, hoping we can make their childhoods magical. Magic through their imaginations.

But a lot of parents worry that with all the screens and devices available these days, our kids might not be given the ability to experience that magic.

Greenfield says he doesn’t think imagination has declined, but that we have on the whole, become a bit risk averse.

“I think a lot of us stick to the same thing and don’t really take risks. Do things a little bit differently,” he says.

Lamble agrees. She says that parents these days, especially 'helicopter parents', can end up focusing on the wrong things when their kids are little.

“Helicopter parents believe that children learning how to read and write early is more important than fostering a healthy imagination.”

She says we fill our kids days with activity after activity, and forget to let them be bored. But when they are bored, that’s when the magic happens.

When they are bored, that's when the magic happens. Image: iStock.

Lamble says it is important to tell your kids about how imaginative you were when you were young. Tell them about the games you played, the adventures you had on your backyard. Encourage them to do the same.

“A good imagination also builds resilience,” Lamble says, “Because it allows a child to be by themselves, and not depend on others for company.”

She says that parents should collect boxes and bricks, and old sheets and pillows.

“Leave them lying around so they can be used to build cubby-houses and obstacle courses.”

Remember the old dress-up box you used to have as a kid? Was it filled with store-bought Batman and Disney Princess dresses? Or was it a faded trunk filled with treasures that only you could see. A few scarves to make you a pharaoh, some old high heels and a shawl you could use as a cape. Your mum’s veil she got married in? And a swathe of shimmery fabric in which you became a Queen?

Lamble says that playing dress ups are an important childhood rite of passage and that it is important as a parent that you show interest in their made up games.

“Don’t dismiss or laugh off imaginary friends,” she says.

A vivid imagination is one of the greatest talents our children can have, and with a little effort, we can foster the magic.

How do you help your kids develop their imaginations?